A Champion for Early Learning 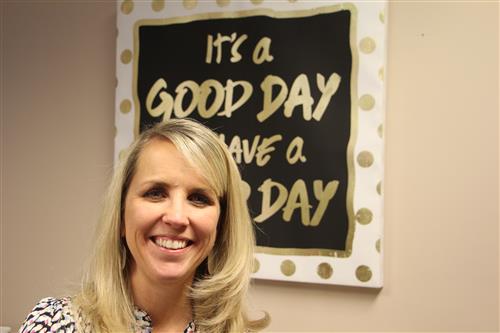 JANUARY 26, 2018 – After becoming the Early Learning Coordinator for the school system, Kelley Bendheim decided to visit every single kindergarten classroom.

In those classrooms, she saw one caring teacher after another doing all they could to help students learn and to help them grow as people.

“There are amazing teachers doing amazing things every single day in classrooms,” Bendheim said. “I saw a lot of teachers who were passionate about working with young children.”

It’s Bendheim‘s responsibility to do her best to ensure that students in pre-kindergarten through second grade in the Winston-Salem/Forsyth County school system get the best possible start.

With the understanding that strong positive experiences in the early years of school can make all the difference in a student’s long-term success, school systems throughout the country have been focusing on the early years, she said.

“There is a sense of urgency behind early learning,” Bendheim said. “You set the tone and the pace for that child’s entire career.”

In some sense, Bendheim’s position is a new one. After Eva Phillips, the school system’s Ready Schools Coordinator, retired, the position was restructured to create the Early Learning Coordinator position.

Paula Wilkins is the principal at Cook.

“Kelley has a heart for children,” Wilkins said. “No matter the need or the issue she sees to the heart of supporting students by any means necessary.”

“Also, she took time last year to work one-on-one with another student to help increase their reading proficiency, and the student made immense growth by the end of the year in reading.”

“Kelley cares deeply about children becoming readers and has a passion to learn and grow more to serve more. She is the perfect advocate, champion, and leader for early learning for our district.  I look for great things ahead for WS/FCS with her leading the early learning charge.”

“I have known I wanted to teach since I had a thought,” she said.

In retrospect, she feels that it was a calling.

“I feel like God placed that calling on my life,” Bendheim said.

When she was young, though, all she knew was that she wanted to do her best to see that her Holly Hobbie doll, her stuffed pigs, and her stuffed bears received the best possible education. Her family provided her the accessories she needed such as a chalkboard that stood on a stand.

Bendheim is from Richmond, Va. After she started school herself, the desire to teach was nourished by experience. In middle school, she would return to elementary school to help out there. She began babysitting. In high school, she tutored fellow students.

When she headed off to James Madison University in Harrisonburg, Va., the thought of becoming something other than a teacher had never crossed her mind.

At James Madison, professors could bring their young children to a learning center on campus. Working the young children there deepened her sense that was the path for her.

She likes working with young children because of who they are at that age.

Learning to read is at the core of becoming a successful student in other subjects.

As a lover of books for young children and someone who enjoys reading aloud to children and seeing their eyes open wide in amazement, Bendheim has amassed a large collection of children’s books over the years.

The books came from all over. She picked up some at yard sales and some at antique shops. Retiring teachers gave her others. She doesn’t know how many she has. She can say that, when she was teaching, her books filled four tall bookcases as well as several bins in her classroom.

In addition to reading children’s books, Bendheim enjoys learning more about education and other subjects by reading such books as Tales of Literacy for the 21st Century by Maryanne Wolf, one of the books that she is exploring at the moment.

If she is interested in reading a book, she goes ahead and buys it because she likes making notes in the margins and highlighting text.

At the beach or staying in her father’s cabin at Smith Mountain Lake in Virginia, she enjoys poking through magazines. She also enjoys RV trips and running.

“It clears my mind,” she said.

She has completed a half marathon – the Disney Princess Half Marathon in Florida – and looks forward to running in a marathon one day.

Bendheim is married to Andy Bendeim.

“I have known him since fourth grade,” she said.

Although they went to the same elementary, middle and high school, they didn’t connect until a high school reunion.

It is the second marriage for both. Each came to the marriage with two children. She brought Tanner and Tymber who, these days, are both students at Reagan High and the Career Center. He brought Ethan and Skye, who spend much of their time with their mother in Nashville.

Bendheim is glad to say that the families have blended well.

“Our family goes together,” she said. “We have really been blessed with the love and the family.”

The Bendheims go to River Oaks Community Church in Clemmons. Andy Bendheim works with her older brother, Michael Murray, and father, Leonard Murray, at the family business Club Forms, which produces forms and other materials for businesses.

After graduating from James Madison in 1995, Bendheim began her teaching career in Richmond. When her first husband’s work brought the family to this area in 1998, she became a teacher at Forbush Elementary in East Bend.

She left teaching for a time after Tanner was born. Tymber came along two years later. Bendheim stayed at home – and volunteered a bit at Tanner’s school – until Tymber started kindergarten in 2006.

Bendheim had missed being in the classroom and was excited to return to Forbush Elementary. At the time, she didn’t envision ever leaving the classroom again.

“I thought I would be teaching forever,” she said.

Experiences such as serving on a committee working on the kindergarten curriculum for Yadkin County Schools got her interested in working outside of the classroom. During that time, she was began working on her master’s degree through an Appalachian State University program that offered classes locally. She earned that in 2013.

Shannon Thompson, an Amos Cottage Teacher based at the Homebound/Hospital Education Center, knows Bendheim from the days when both worked at Kimmel Farm Elementary.

“One of the joys of being in education is the people you meet and the relationships that are formed,” Thompson said. “I first met Kelley Bendheim when she accepted a position as curriculum coordinator at Kimmel Farm Elementary. Kelley came into the position in the middle of the year at a time when the staff craved leadership and knowledge.”

“She was quick to listen and slow to judge. Kelley worked to develop a trusting relationship among staff where teachers felt valued, heard, and respected as she also provided leadership and knowledge to enhance our K-2 program. As a result of her leadership, teachers shared knowledge, strategies, collaborated and student achievement was greatly impacted. She always stood to do what was best for students and teachers while balancing her many other roles as curriculum coordinator.”

“I observed as she gained the trust of students and families and created a classroom culture where students were valued and learning flourished. Nothing matter more to her than the success of the students in her classroom.”

“It has been an honor to work with her. WS/FC Schools is blessed to have her as Early Learning Coordinator as she will put the needs of students first and foremost.”

As the Early Learning Coordinator for the school system, Bendheim works not only with teachers but also with the school system’s Instructional Superintendents who support particular schools, with people and organizations in the community and state, and with parents.

“How do we connect more with families in the early grades?” is one question she is seeking to answer.

Local partners that support the work Bendheim does include the Kate B. Reynolds Charitable Trust and Project Impact, a community initiative supported by The Winston-Salem Foundation that was created to provide extra money to the school system to help it address critical student achievement gaps.

At the state level, Bendheim has been working with the K-3 Formative Assessment Advisory Council, and, at the local level, she is beginning to work with such partners as NC PreK, Smart Start and Forsyth Promise.

“We want to strengthen relationships,” she said.

Her experiences visiting the kindergarten classes in every school taught her a lot about each’s schools strengths and challenges. She wants to use that knowledge to help her see that students at every school get the care and attention they need.

She is delighted to be doing what she is doing.

“You set the tone and pace for that child’s entire career,” she said. “It’s an honor and a privilege to be part of that.”

Katie McGregor, who is the assistant principal at Jefferson Elementary, worked with Bendheim when both were Instructional Facilitators.

If McGregor had a question, Bendheim usually had the answer. If not, she would find it. McGregor respects Bendheim as a person and as a colleague.

“Kelley's energy is contagious,” McGregor said. “She is innovative, passionate, and dedicated to the work of growing young children as learners. Kelley truly believes that all children can learn.”

“Kelley is a visionary leader and teaching and learning is the primary focus of her work. Detail and organization are important to Kelley and she perseveres with every task and opportunity she faces. She communicates well others. Kelley asks great questions. She asks questions to learn from others, but also to reflect upon her work as an instructional leader.”

“I am excited to see how Kelley will blend her knowledge of teaching and learning with the district and state expectations of early learning.”