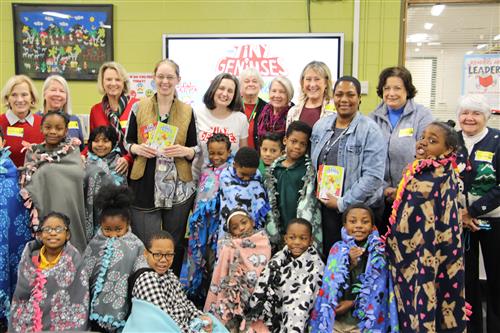 DECEMBER 10, 2019 – On Monday, second-graders at Kimberley Park met an author who has written more than 300 books, and they got to ask her all the questions they wanted to ask.

Students also discovered that they were being given two books to keep and that women from an international society had made blankets for them to take home and wrap themselves up in while they read.

The author was Megan E. Bryant, who talked to students about books in one of her series. Called Tiny Geniuses, it’s about important people from the past who – as people only 3 inches or so tall – come to the present to help a boy named Jake with his school projects.

As Bryant talked, the second-graders learned about such people as Ella Fitzgerald, Jackie Robinson, Ben Franklin, and Isaac Newton. 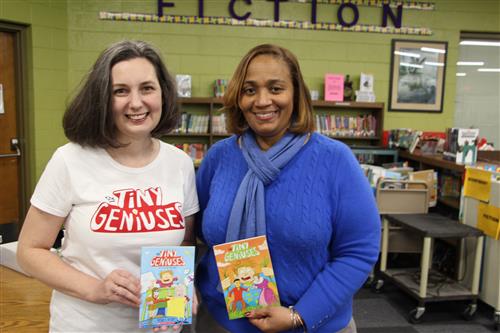 As second-grade teacher Rose Brown’s students came into the media center, she said, “They are very excited to actually meet an author in person.”

When Brown is reading books to her students, it can be hard for them to imagine a real person writing them. She hoped the experience changed that.

“I hope they know when I am reading a book that authors are real people,” Brown said.

This experience would change that, she said. “It puts a face to the person who writes the books our children read.”

Yvette Evans, who is the Media Specialist at Kimberley Park Elementary, said her vision “is to instill a love of reading into every child,” and she hoped this experience would help do that for the students. 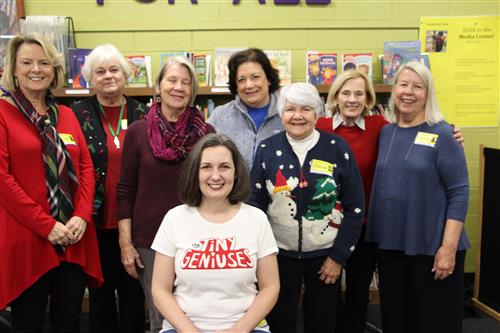 Joining Bryant were members of the Beta Mu Chapter of Delta Kappa Gamma Society International. They – and other members of the society – had made blankets that they were going to give to the students at the end of the visit. Both the blankets and the two copies of Tiny Geniuses that each of students was going home with were a surprise.

All the students knew was they were visiting with Bryant.

And that was plenty exciting enough.

Bryant was excited, too. During the previous school year, she and members of the society had gone to Cook Literacy Model School for a similar adventure. It proved to be one of her best author visits ever.

By the end of the experience, she said, “I could barely hold back the tears because the kids were so excited.”

At Kimberley Park, there are two classes of second-graders – one taught by Brown and the other by Katie Gehrs. Once everyone settled in, Judith Kuhn introduced Bryant and she began taking the students on a journey through the Tiny Geniuses books.

“Jake loves baseball more than anything in the world,” she told them. 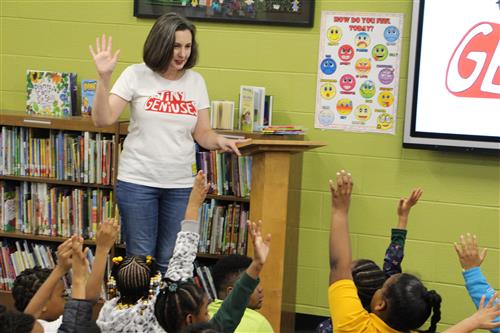 He has trouble with school, and, when he learns that he won’t be able to play baseball unless he does well with his science-fair project, he makes a wish at a wishing well that some people might think looks a lot like a storm drain.

His wish is to get some help with his school projects. His wish comes true when tiny geniuses come to help him with various projects. The tiny geniuses are really small – 3 to 4 inches tall – “but they get in a lot of big trouble.”

In writing the Tiny Geniuses books, Bryant wanted the stories to be both funny and educational. As Bryant talked, students would make comments and ask questions, which was fine with her.

When she told them about singer Ella Fitzgerald going to the Apollo Theater in Harlem to sing at Amateur Night, she said it didn’t go well at first when a nervous Ella Fitzgerald “made the worst screeching sound you can imagine” and people booed.

Second-grader Micah Wilson had an excellent question: “Did they throw any tomatoes?”

To the best of Bryant’s knowledge, they did not. 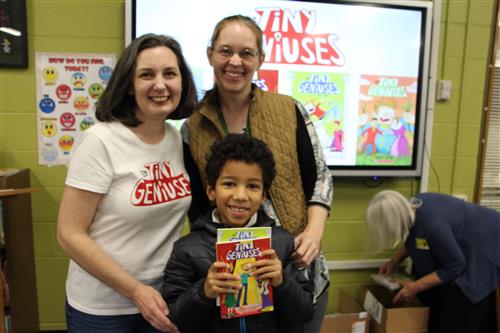 She went on to talk about how, at a time when the country was segregated, Ella Fitzgerald’s wonderful singing helped bring whites and blacks together.

Bryant discovered along the way that students already knew a lot about those days. When she asked whether they knew who Rosa Parks was, pretty much every student raised a hand.

During the course of the visit, students learned not only about Jake and the tiny geniuses who helped him but also a bit about Bryant’s life.

When Bryant was growing up, her family moved quite a bit, and, by the time she had graduated from high school, she had gone to 10 schools in such states as California, Connecticut and Massachusetts.

She created her first book before she could even write. When she was 3, she came up with a story called “Bird Hotel.” It was about birds that had to move after the tree they lived in fell down.

She drew pictures to go with it, and her mother wrote down the words. 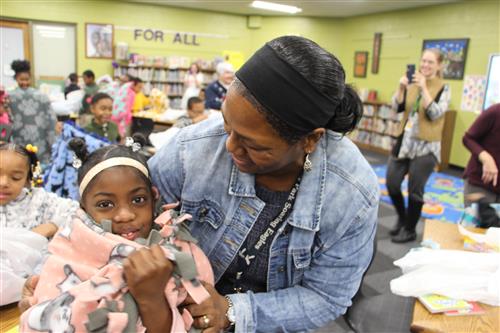 “I was a voracious reader as a child,” she said.

As an adult, she married Daniel Prosterman. The family moved to Winston-Salem in 2008 when her husband became a history professor at Salem College. They have three children. Clara is 12. Sam is 6, and Gabriel will be 2 in January.

“Our house is wall-to-wall books,” she said.

She is glad the family is here in Winston-Salem.

“I have found it an amazing place to raise a family,” Bryant said.

After Bryant graduated from New York University, she worked for 5 years as a children’s book editor before saying good-bye to her job and focusing on writing full-time.

It worked out quite well. She has now written more than 300 books – board books for young children, picture books, chapter books for young adults. Adults like the chapter books, too, she has discovered from comments about such books at Glow, which tells the story of what happened to girls who worked in a factory where they painted luminous watch dials for the soldiers fighting in World War I. 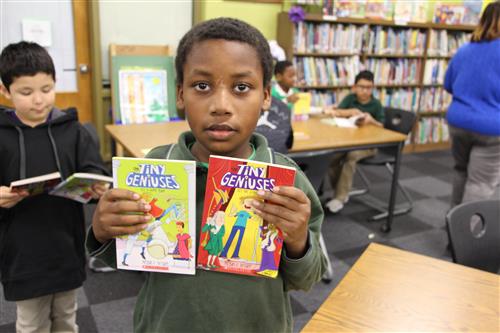 Other books include a series about the science behind making candy. She and her husband have written a series for young people that includes such titles as My Vote and My Supreme Court. It’s coming out next year.

When it was time for the surprise, Gehrs and Brown had students go sit down at tables.

“This is so awesome,” Gehrs said as the students headed to the tables. “This is so wonderful.”

Brown said, “This was such a great experience for my kids.”

And it was great for her, too. She enjoyed learning more about the notable people in the books.

Not knowing that her wish would soon come true, second-grader Jamiyah Saunders said, “I want one of those books.”

When students learned that each of them would be given two books, the media center was filled with a collective, “OOOOHHHHH!” 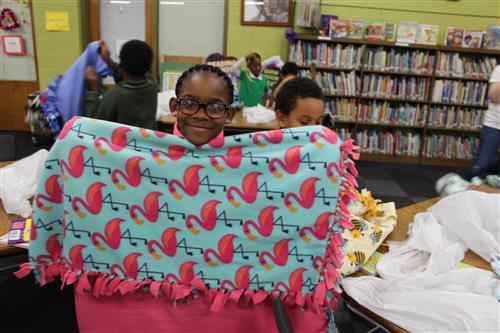 One table at a time, the students went up, and Bryant handed each of them their books.

After Amaayah McGee sat back down at her table, she said she was excited to read them, especially the one that has Ella Fitzgerald in it.

“I think it is going to be a nice book,” Amaayah said.

The blankets were in bags, and, when it was time to distribute them, the students were told not to open the bags until everyone had one. Once everyone did, they opened them, and the excitement level rose again as they discovered another wonderful gift.

When it was time for the students to head back to their classes, Kuhn said: “I hope they get inspired to write and inspired to read. And I hope they love the blankets, and they want to cuddle up and read.”

The members of the Beta Mu Chapter of Delta Kappa Gamma Society International who made quilts for the students at Kimberley Park included: