Mix It Up Day 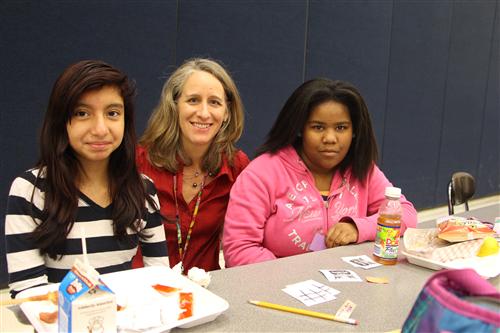 OCTOBER 29, 2015 – At schools such as Kernersville Elementary and East Forsyth Middle, Mix It Up at Lunch Day gave students the opportunity to get to know people they don’t routinely have lunch with.

“We have a really diverse school, which is great,” said Jennifer Long, who teaches eighth-grade language arts at East Forsyth Middle School.

But that diversity also means that students in different groups may tend to stick together at lunch. Plus, at any middle school, students tend to eat with students in the same grade.

So, on Tuesday, Long helped mix it up by presenting students standing in the cafeteria line with a plastic bag filled with construction-paper squares of different colors. A student would pull out a colored square and, after going through the lunch line, would head to the table marked with whatever color – pink, yellow, purple – the student had drawn. 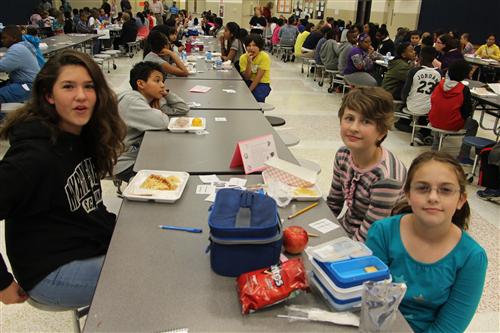 That meant that sixth-graders ended up with seventh- and eighth-graders and, in at least one instance, a fan of Katy Perry ended up with a girl unfamiliar with the singer.

Students were having fun. At one table, seventh-graders Danna Morales and Danalla Dearmon and sixth-graders Megan Alexander and Mimi Cramer all offered some version of “You get to meet new people” when asked what they liked about the experience.

“We should do this every day for lunch,” said sixth-grader Allajah Binns, who was sitting at the yellow table.

At the pink table, sixth-grader Jamie Horvath, who was unfamiliar with Katy Perry, was learning all about the singer from fellow sixth-grader Mila Sizemore.

At the orange table, sixth-grader Blake Brown enjoyed talking to people he doesn’t regularly talk to.

“They were nice,” Blake said as he went to enter the drawing for the Mix It Up basket filled with goodies.

To help spark conversations, Long’s students had made and distributed sheets of papers with such games as tic-tac-toe that students could play if they wanted. 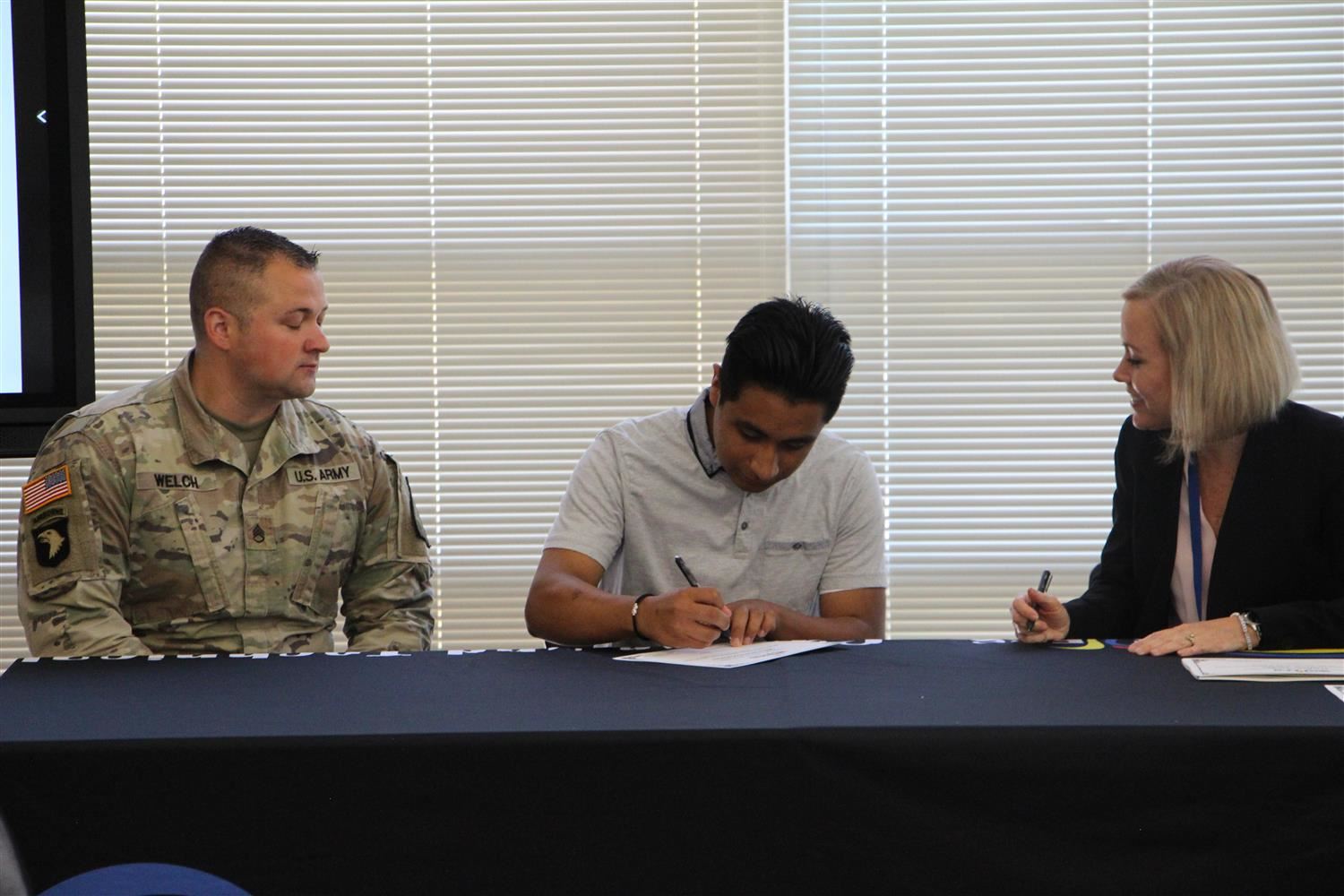 East Forsyth Middle has participated in Mix It Up Day for the past seven years. Principal Dossie Poteat praised Long for taking the initiative to organize the day each year. “Jennifer is the spearhead,” he said.

Poteat said he hoped that students came away from the experience with a better understanding of how, although we make look different on the outside, we’re all similar on the inside.

A few miles down the road at Kernersville Elementary, the students in Debra Lackey’s fifth-grade class joined students in the Exceptional Children (EC) program in grades two through five for lunch in the cafeteria.

“Diversity comes in all shapes and sizes,” said school social worker Lisa May.

Students didn’t stop with having lunch together. As the “seniors” at Kernersville, the fifth-graders have gotten to know the school building and grounds well over the years. With that in mind, they had planned a fun scavenger hunt for the EC students. Unfortunately, Mother Nature had other plans. After she sent a chilly rain, Lackey and EC teachers Elizabeth James, Kim Whicker and Sharyn Prescott moved the proceedings to the gym.

Lackey pulled out a colorful parachute and invited all the students to find a spot around the perimeter to hold onto so they could play some games. In one, everyone worked together to bounce plastic frogs into the hole at the center of the parachute.

James works with EC students in grades four and five. “It’s good for them to interact with other students they may not be familiar with and to work on those social skills.”

It was also valuable to work with a larger group of students than they regularly do day-to-day, she said. “I think they are doing a great job.”

Prescott who works with EC students in second and third grade said that it was nice for the younger students to get the chance to play with older students.

“They get to look up to some older kids and talk to them,” Prescott said. “It makes them feel as if they are important.”

Principal Shane O’Neal and assistant principal Teresa Rose stopped by. Rose said that spending time together was a good way for students to learn to see past their differences. 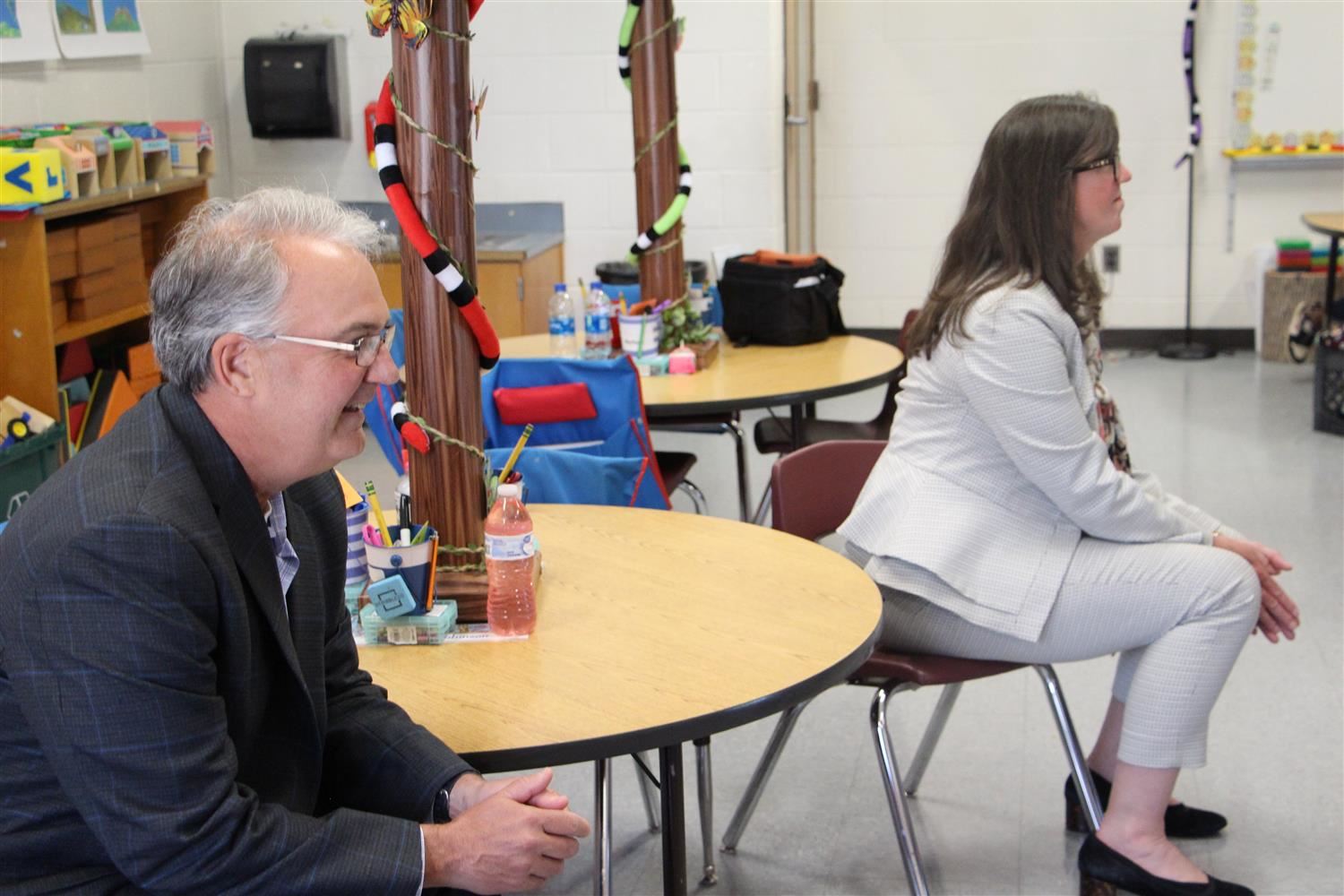 O’Neal said, that, while giving students the opportunity to see that they all care about the same things, spending time together in this way with teachers, gave them a chance to also see the teachers in a new light.

Students were certainly having fun.

“It gives me a chance to meet and make conversation with new people I have never met before,” said fifth-grader Tyrik Haliburton.

“My favorite part was getting to know them better,” said fifth-grader Tessa Walker. “I have enjoyed realizing that they are nice and kind.”

Although she was a little nervous beforehand, now she knows that she can make new friends. “I feel good about it,” Tiffany said.

Before Mix It Up Day, school counselor Cynthia Jolly had visited a number of classrooms in the school to encourage students to embrace diversity in their lives, both at home and school.

She read a book called The Crayon Box Talked to the younger students. They colored pictures with one color and then created a scene with multiple colors. With the older students, she had them put themselves in groups representing such variables as “Who has a dog?” and “Who has a brother or sister?”

When Jolly approached Lackey about the possibility of creating a scavenger hunt tied into the science curriculum, she was all for it.

“I think it’s good to have kids be around kids who are not exactly like themselves,” Lackey said.

“The older students have been encouraged to see themselves as role models and have been asked to make the younger ones feel comfortable and appreciated,” Jolly said.

For the EC students, she said, “This is a big deal for them to have the opportunity to mix with other students. It is also a wonderful opportunity for our fifth-grade students to give of themselves to the younger ones.”

It looks as if Mix It Up Day is just Day One of a new, ongoing friendship among students in different classes.

As everyone left the gym to return to their respective classrooms, Lackey said that her students would definitely put on the scavenger hunt another day and that she looked forward to working with the EC students in other ways in the future.

“I think it’s something we’re going to try to do on a regular basis,” she said.

To learn more about Mix It Up at Lunch Day, go to Mix It Up 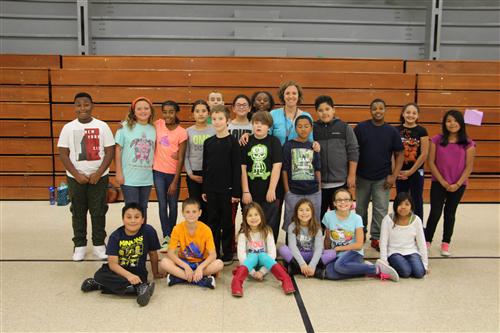