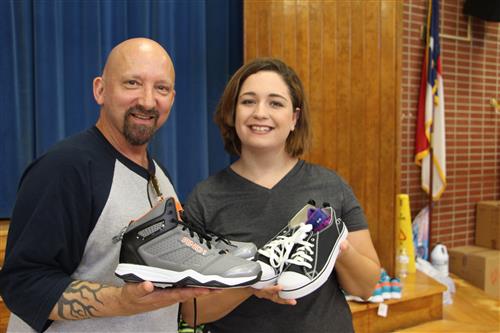 JULY 31, 2017 – On Saturday, Pamela Kaire brought her daughter, Seynabou, to Easton Elementary to be fitted with a pair of brand-new shoes to wear to school this year.

Kaire said that she was grateful for the support from the community in getting Seynabou, who will be in the fourth-grade at Bolton Elementary, the things she needs for school. As Kaire saw it, the experience also came with a bonus for Seynabou and the other children there.

“It’s lets the children know that people in the community care,” Kaire said.

Seynabou was one of 1,250 students who received new shoes for school this past weekend thanks to a program sponsored by Love Out Loud, an organization created to serve people in Winston-Salem; by  CarolinaCARES, an outreach program of the Carolina Crown drum corps organization; and by Samaritan’s Feet, which provides shoes for young people throughout the world.

“We want to provide every child with the opportunity to have a strong start to the school year,” said Liz Kaiman, the executive assistant for Love Out Loud.

CarolinaCARES also sponsors shoe giveaways in other cities. Jim Williams, who is a board member of Carolina Crown, said that, in addition to helping those in the community who need the support, the program is a way to engage the young people in drum corps competitions in social issues.

Such businesses as Coca-Cola and Walmart also provided support or the giveaway.

This was the second summer for the program. A number of the volunteers at Easton were students in Winston-Salem/Forsyth County Schools who came with their parents. One of them was Jose Delgado, who will be in the fourth grade at Sherwood Forest Elementary. 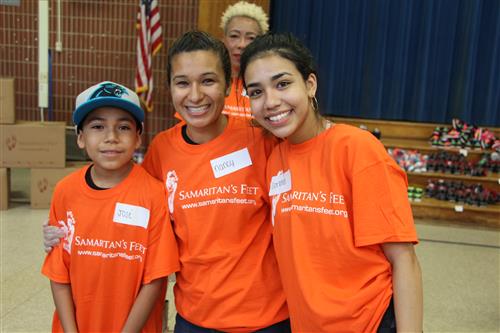 Jose said he was happy to be there.

“I want to help out the children,” Jose said.

Volunteer Ethan Romas, who will be in the fourth grade at Vienna Elementary, said that, on a regular Saturday, he might have been fishing or helping his father fix up the car he is working on.

He was glad to be there.

“I like helping people – making them feel happy,” Ethan said.

Everything was set up in the gym/auditorium. After checking in at the door and telling volunteers the size of the shoes each student would probably need, everyone would go to the next open chair, where the student would sit down. An adult volunteer sitting across from the student who would wash the student’s feet. 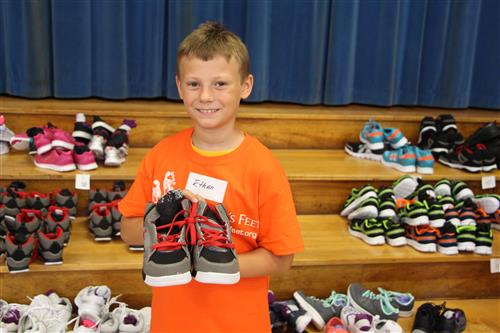 The available shoes had been lined up on the steps to the stage. Volunteers such as Ethan and Jose would go pick up a pair of shoes for the child. Each child also received a pair of new socks. The adult volunteer would put on the socks and then the shoes. If they didn’t fit just right, another pair would be retrieved.

Once the right shoes were found, the student had the option of wearing them or putting their old shoes back on and saving the new ones for later.

Colin Tribby, who is the principal at Easton, was one of the volunteers helping students get fitted. When he was all done with one Easton student, Tribby told him that he was looking forward to seeing him back at Easton when school started.

Before heading home, all of the children were invited to stop by a table where volunteers were giving each child a book to take home and keep.

Kere Pickett was one of the students there for new shoes. Having finished elementary school at Ibraham Elementary, she is looking forward to going to Walkertown Middle for the sixth grade. Kere wants to be a dancer when she grows up.

Asked how her new shoes felt, she said, “Good.” 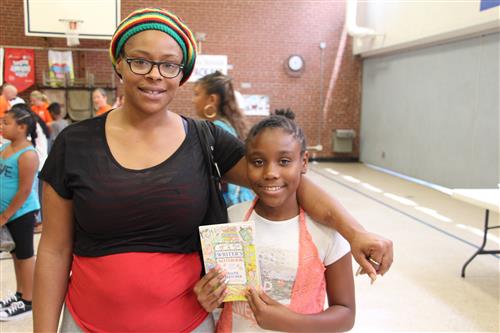 Her mother, Shameka Brown, had brought all three children. Brown said she was grateful for the assistance in getting everything her children need to be ready for school.

Parent Lovely Summers, who was there with her three children, was also grateful.

“It’s really helpful,” she said “It’s nice for the kids.”

Her son Jarie Bonner, who will be a fifth-grader at Forest Park Elementary, said his new shoes felt good.

Shae Jones was there with her four children.

“It helps out with the school stuff,” Jones said. “We’re thankful.” 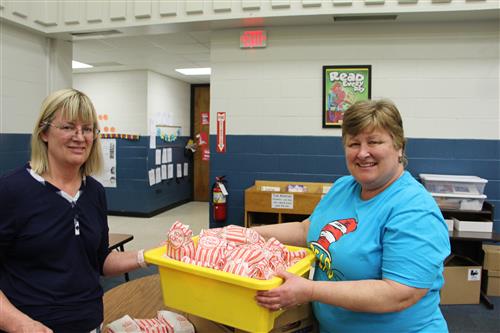 Her daughter Daysia Aritis will be in the third grade at Speas Global Elementary.

While Daysia and the volunteer helping her were talking, it came up that she likes to run. She’s fast, she said, and wants to be a track star one day.

Does she expect to be even faster in her new shoes?

“Yes!” she said and smiled.

You can find out more at Love Out Loud, at Carolina Crown and at Samaritan's Feet