A Desire to Help

MAY 24, 2018 – Freda Smith became a principal as part of her quest to find the best way for her to serve others.

“All my life, even as a child, I have been helping people in different capacities,” she said.

As the principal at Northwest Middle, she serves students, their families, and the members of her staff, say those who work with her.

“I've learned so much by being able to work with her,” said Meghan Helms, the school’s Instructional Facilitator.

“It's safe to say, I've never worked for a more dedicated and hard-working individual. Mrs. Smith pours her heart, soul and mind into her job as a Principal and takes it very seriously. She leads by example. She would never ask anyone to do anything that she wouldn't or hasn't already done herself.”

“She also is a critical thinker and considers all aspects and perspectives in any decision. This information is not always seen by those she encounters, but because of the opportunities she is exposed me to, I really have learned how she tries to balance it all.”

“What I admire most about Mrs. Smith is her willingness and support when it comes to instruction, and her openness to learning from others. She keeps instruction at the center of everything she does. She wants the students in her building to receive the best education possible.” 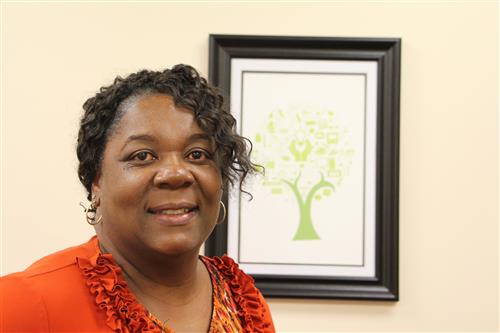 “She hires great teachers and supports them and students in growing academically. She doesn't sit back and let others do all the work. She is in there with her sleeves rolled up, taking feedback from others into consideration always, and is always visible in the school as a means to support students and teachers. She is always looking to grow herself, and to me that's what makes a great leader.”

At the Core Awards 2018, Smith was named Principal of the Year for Winston-Salem/Forsyth County Schools.

After working for R.J. Reynolds Tobacco Co. for the early part of her career, Smith joined the school system in 1998 as a lateral-entry teacher at Walkertown Middle. She went on to serve as an assistant principal at Atkins and Reynolds high schools before coming to Northwest as principal in 2013.

Smith grew up in Harnett County, not far from Fayetteville. She comes from a two-sided family, she said.

“I was raised by my great uncle and his wife,” she said. “They are my parents since the age of 2.”

She maintains a great relationship with her mother.

Growing up, Smith had educators in her life. And in school, she tutored other students. She liked setting an example for them about how to be successful. So the seeds of a path in education were planted.

When she headed off to Winston-Salem State University, though, she envisioned a career in communications and majored in Mass Communications.

“I knew I wanted to work with people,” she said. “I thought I was good with public speaking…I wanted to be a voice for others.”

After she graduated from Winston-Salem State in 1987, she went to work for Reynolds Tobacco Co. Her responsibilities included resolving product discrepancies in inventory and orders. That required talking with people in other countries.

“I was able to make relationships with people all around the world,” she said.

In 1990, she married her high school sweetheart, Keith Smith. He teaches at Northeast Guilford High School. They have two children. Their daughter, Ashley Smith, teaches dance at Parkland High School. Their son, Kelson, is a junior at N.C. A&T State University.

Over the years, Smith began to think about other ways to answer the question – “How else can I reach the greater community?” She decided to become certified as a teacher by earning a master’s degree in Technology Education at N.C. A&T in 2000.

While she was doing that, she took a lateral-entry teaching position at Walkertown Middle in 1998. There, she served as a technology instructor.

When Atkins Academic & Technology High School opened in 2005, she went there. In those days, Atkins had separate magnet programs. She was the coordinator for the Computer Technology program.

Her responsibilities included recruiting, coordinating marketing, providing instructional support for teachers, and assisting with the documentation required for magnet funding coming from the federal government and the Bill & Melinda Gates Foundation.

Thinking that she wanted to pursue other opportunities for serving the school system, she deciding to go into administration and began working on a master’s degree in School Administration at N.C. A&T.

Art Paschal, who was the principal at Reynolds at the time, said that the move was part of a shuffle in which neither one of them had a voice in the decision. At first, he found that off-putting. But it soon become clear that he had been given a great gift in having Smith become an assistant principal at Reynolds.

“She has a good head on her shoulders,” Paschal said. “She has the ability to be tough and caring at the same time. That is a great gift.”

Students who had been called into her office for some disciplinary matter might end up giving her a hug on the way out the door.

Her gifts go beyond that.

“She is articulate,” he said. “She soaks up everything. She really wants to be a great administrator and wants to do the right thing.”

They ended up becoming friends as well as colleagues and still keep up, said Paschal, who retired from WS/FC Schools in 2012.

Smith goes to New Bethel Baptist Church on Trade Street. There she serves on a number of committees and sings in the choir.

When she gets the chance, she likes to travel. She likes roller coasters, and, if there is an amusement park around, she visits if she can. She also enjoys bike riding.

What she likes to do most is to surround herself with positive people and to find ways to support others.

“Everything I do comes back to serving people,” she said.

Vanita Fleming, who teaches English at Reynolds, thinks that one of Smith’s gifts is the ability to listen.

“Many people will hear another person but do not listen to them,” Fleming said. “She is an active listener and is able to empathize as well as sympathize with people.”

Fleming also appreciates Smith’s knowledge and professionalism. These traits can be seen in the ways she speaks to young people and adults, the way she dresses and carries herself at work and in the community, whether that be a play or performance, a football or basketball game or a wrestling match.

“Mrs. Smith is a ‘teacher’s teacher’ at heart!” Fleming said. “She is admired and emulated by other members of the profession. She is soft-spoken but do not be mistaken, she means business! She is a dedicated professional who loves students, and enjoys helping teachers to hone their craft. She is especially patient with novice teachers entering the profession. She has not forgotten what it is like to be in the classroom and the daily grind that come along with it.”

Smith is in the midst of working on a doctorate in Educational Leadership at Gardner Webb University.

At Northwest, she makes sure to effectively communicate with parents, students and members of the staff. She makes a huge effort to reach out to the community by inviting them to visit the school and creating local business partners.

Emily Miller is a sixth-grade science teacher at Northwest.

“Mrs. Smith has a tremendous capacity to bring out the best in all of us - staff and students alike,” Miller said.

“She recognizes the struggles of students but helps us as teachers, and students themselves, to believe that they are capable of overcoming their difficulties to be their ‘best selves.’  This faith in the resiliency of the human spirit transfers into a leadership style that is both encouraging and expectant of excellence.”

“Mrs. Smith is gifted with wisdom that goes beyond logic and knowledge. There have been many times Mrs. Smith has been at the right place at the right time to assist in just the right way. She holds herself accountable for the well-being of all and is cognizant of the many nuances that come with leading a school of students who are in the midst of transitioning into teenagers.  Her wisdom flows from a focused effort to know the 900+ students at Northwest Middle.”

“Mrs. Smith is a model of tenacity in persisting to meet goals. She refuses to make excuses or to place blame on others.  She digs into an issue armed with data and research. She does not give up or give in until the issue is resolved, resulting in our students achieving what may have previously been viewed by some as unattainable.“

“I am blessed to work with Mrs. Smith and have grown both personally and professionally in my time with her at Northwest Middle.”