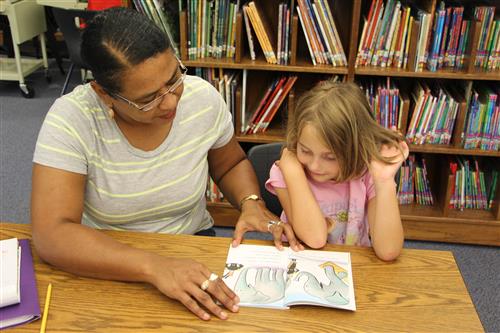 “She struggles in reading,” said her mother, Shawnie Poplin.

So it’s no surprise that reading hasn’t been Logan Marie’s favorite thing to do.

“I don’t like reading – I never have,” said Logan Marie, who will be in the second grade at Sedge Garden Elementary.

When her mother heard about the Summer Reading Clinic at Appalachian State University Academy at Middle Fork, she thought it would be good to have her daughter participate.

“I figure it will give her an edge in school,” Poplin said.

Logan Marie’s opinion of reading is definitely changing for the better. 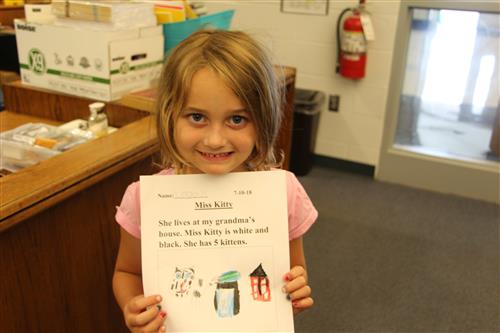 Just that morning, Poplin said, Logan Marie had volunteered to read one of the books that had been sent home with her.

And, when asked what she thought about the Summer Reading program, Logan Marie’s response was enthusiastic.

It’s easy to see how the Summer Reading program would transform the experience of reading for the students taking part. For one, they’re getting one-on-one attention.

The Winston-Salem/Forsyth County teachers in the program are working with one or two students at a time. This allows them to find and focus on the approaches that best meet each child’s needs.

Logan Marie works with Therese Castaneda, who teaches second grade at Speas Elementary. Castaneda soon discovered that Logan Marie loves cats. So she has included such books as Pete the Cat for them to read together.

The students have also been writing and illustrating stories. For one story, Logan Marie wrote about Miss Kitty:

“She lives at my grandma’s house. Miss Kitty is white and black. She has 5 kittens.” 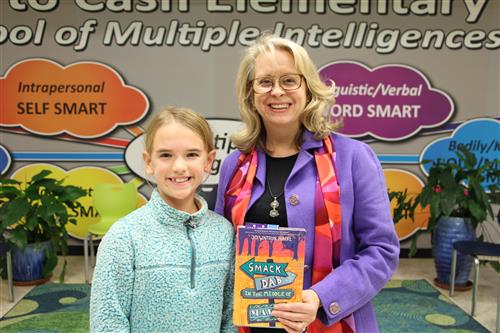 After she finished illustrating it on Monday, she and Castaneda posted it in the hall outside the media center with stories by other students. One story is about how earbuds are vastly superior to headphones because they are way more comfortable. Another was about being a flower girl in a wedding.

Castaneda has enjoyed her time with Logan Marie.

“She is wonderful,” Castaneda said.

It’s been satisfying for Castaneda to participate in the clinic.

“I am helping a child,” she said. “I am trying to motivate. My first goal is to get her to want to read…My second goal is to equip her with reading strategies.”

Throughout the media center, students were working with teachers.

Adan Moya, who will be in the third grade at Walkertown Elementary, was working with Blanca Basurto, who teaches second grade in the Spanish/English dual-immersion program at Speas Elementary. 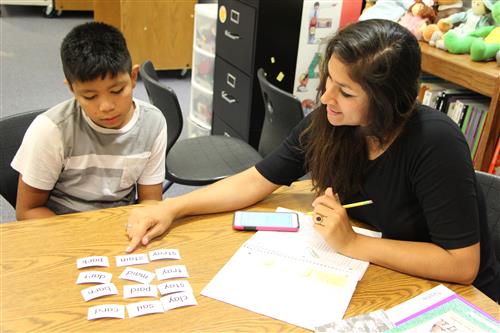 At one point, Basurto was working with Adan on recognizing words in the same family. After laying out cards with such words as “sail,” “card,” and “clay” on them, she would hand him cards with other words. He would pronounce the word and place it below the card from the same family.

So, thanks to Adan, such words as “paid,” “park,” “stray” and “tray” all found their families.

“You did a fabulous job. I didn’t hear any mistakes,” Basurto said after he finished one round.

Earlier, Adan said that he has been enjoying the program.

He especially likes stories that have animals in them.

Jesus Virgen, who will be in the third grade at Speas, also likes stories with animals in them. The list of animals Jesus likes includes kangaroos, chimpanzees, hippos, and lions. Wanting to make it clear that the list was by no means complete, he added, “and other animals.” 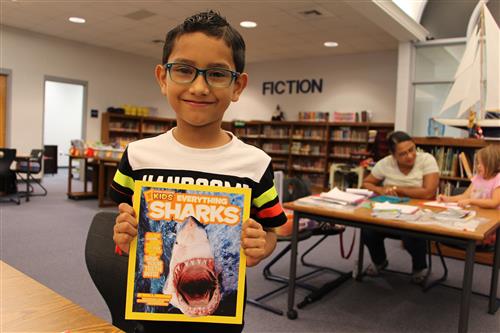 Jesus was working with Jennie Hawk, the 2017-18 Teacher of the Year for Winston-Salem/Forsyth County Schools. Hawk teaches first grade at Moore Elementary.

Along with Jesus, Hawk has been working with another student. It’s been illuminating, she said, to come to understand how dramatically different each child’s needs are when it comes to becoming more at ease with reading.

“On every single level, they are different,” she said. “It opens up a whole different mindset. I think I am going to be more prepared.”

All the teachers participating in the clinic are working on their master’s degrees in Reading Education at Appalachian State.

“They are really trying to working on their craft,” said Amie Snow, the Instructor for the clinic and the Director of Curriculum and Instruction at Middle Fork. “The teachers have worked really hard, and they have learned a lot.”

With several other teachers who have already completed those degrees serving as supervisors, the teachers working with the students are also getting lots of focused attention.

Lauren Parmley, who teaches third grade at North Hills Elementary, said she appreciates having the teacher supervisors there. 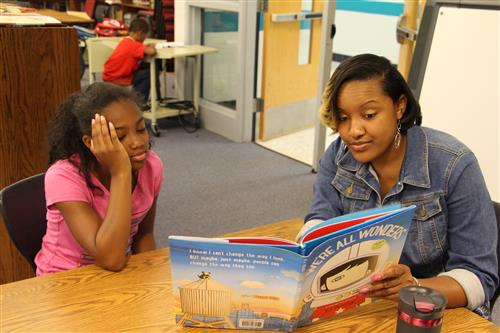 “We are getting instant feedback,” she said. “I am able to make daily changes.”

One observation that Parmley has taken to heart is to talk less and focus more on having the student talk about what is going on.

One of the teacher supervisors is Heather Wham, who has been teaching at Ibraham Elementary and who is coming to Middle Fork this year to teach third grade.

Wham hopes that, by the time the clinic is over on July 26, teachers will have a strong understanding of how to reach struggling readers and how best to implement those strategies in the classroom.

Twins Mikah and Mikaylah Fuller, who will be in the fourth grade at The Downtown School, have been enjoying the reading program.

Mikah likes being able to write about things that happen in his life, such as what he did on the Fourth of July. 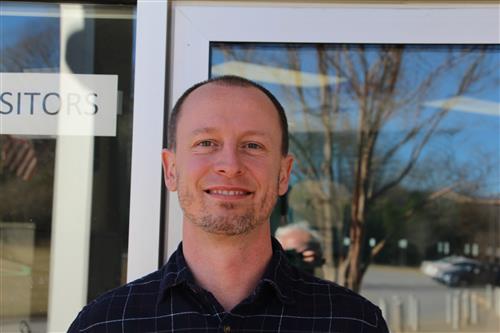 Mikaylah likes that they read fun books. When she grows up, she wants to become a veterinarian. At the moment, her favorite animal is the panda.

If he doesn’t become an NFL star, Mikah might become a zoologist. His favorite animal is the Siberian tiger.

Mikah and Mikaylah’s father, Ryan Fuller, is a teacher assistant at Ashley Academy, and their mother, Tiffany Fuller, is the lead pre-kindergarten teacher at Smith Farm Elementary.

When he dropped them off, Ryan Fuller said that he and his wife like that the program gives the children the opportunity to continue to learn during the summer in an enjoyable environment.

When Adan’s mother, Maria Canelo, dropped him off, she said, “I’m happy he had the opportunity to be here.”

Money to operate the program comes from The Winston-Salem Foundation, and there is no charge for the students participating.

Middle Fork is in the midst of a major transition.

As part of a state project created to increase the success of students in low-performing schools, a number of schools throughout the state have become Literacy Lab Schools under the administration of a state university. Middle Fork is one of those schools. 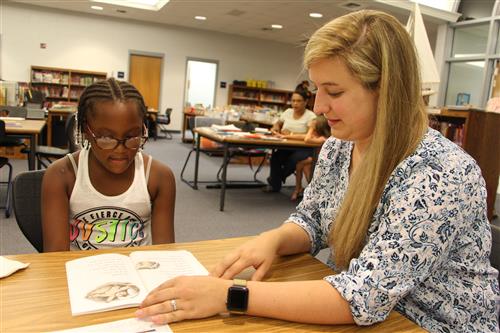 Participating in the summer reading program is just one way in which the teachers taking part are working to serve students and other teachers in the school system.

For instance, teacher Summer Riley, who will be teaching kindergarten at The Downtown School this year, has also taken a workshop on the Orton-Gillingham approach to reading, which combines visual, auditory, tactile and kinesthetic techniques with an in-depth exploration of the rules of reading.

The teachers participating in the Summer Reading Clinic at Middle Fork are: 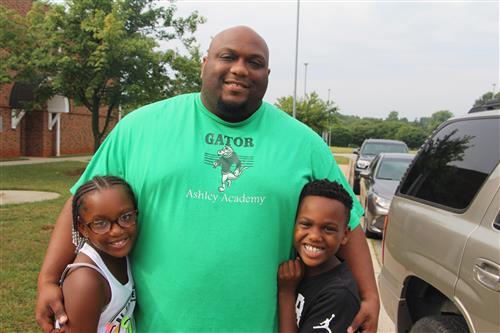 The teacher supervisors are: