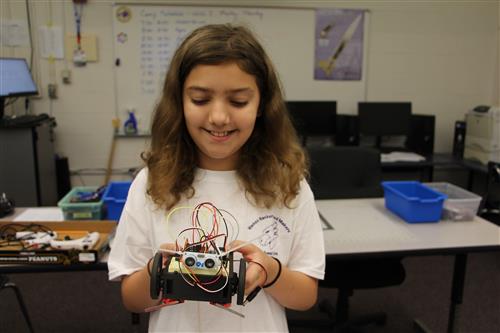 “It’s really fun because it’s hands-on,” said Adrianna, who will be in the sixth grade at Paisley IB Magnet School.

Camp activities can be so engaging that, sometimes, she looks up and realizes that she hasn’t thought of anything else for a good while.

“You don’t realize how much time is passing by,” Adrianna said.

Adrianna is one of about 25 students going into grades four through eight who are participating in the camp, which is in its first summer. 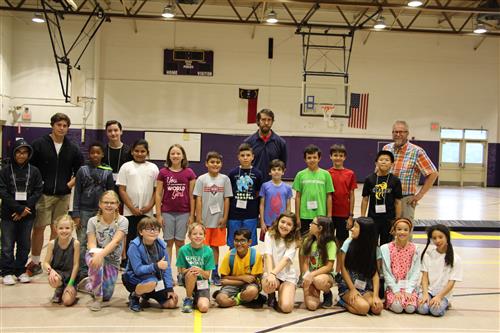 David Draper, a Project Lead the Way teacher at Hanes Magnet School, organized the camp and serves as its director.

“I felt like, with Hanes being a STEM magnet school, it is a natural focus,” Draper said.

On Wednesday morning, students gathered in the gym to start the day with team-building activities. Patrick Velde, who teaches social studies during the regular school year, worked with the younger students, and Draper worked with the older students.

Holding a balloon in his hand, Velde introduced the students to the Moon Ball challenge – without using hands and following such guidelines as not having the same student touch the balloon twice in a row, they would see how many times they could bounce the balloon from one student to another before it ended up on the floor. 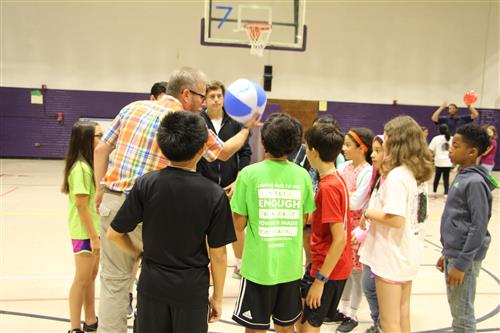 Cleo Culler, who is going into fourth grade at Whitaker Elementary, is a natural organizer, and, once the challenge began, she would suggest places for her teammates to stand that she thought would ensure the best results.

Draper and the older students took on a similar challenge with a beach ball.

At one point, T.K. Craft, who is going into the eighth-grade at Hanes, joked that the shorter students had the advantage because they were closer to the ground.

Looking on was Melissa Anderson, the Instructional Facilitator at Hanes and one of the staff members participating in the camp. For students who already go to Hanes, it’s a great summer opportunity, she said, and for students who are not yet in middle school, the camp provides an opportunity for them and their families to see whether Hanes might be the school for them.

For her, the camp has provided the bonus of being able to spend more time working directly with students than she can on many days during the regular school year. 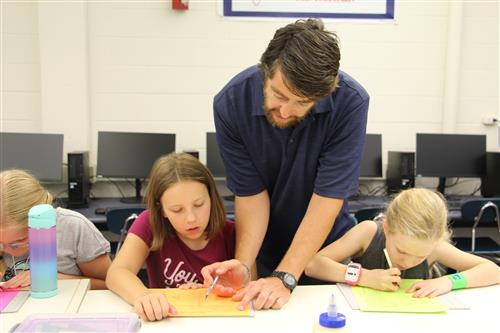 “It gives me an opportunity to work more closely with the kids,” Anderson said.

Once the students were done with Moon Ball, they dropped off their lunches in the cafeteria and headed to classrooms. In one, the older students were programming robots that they had built earlier, and, in another, the younger students were going to make rockets.

The day before, they had made rockets using such materials as the plastic bottles that sparking water comes in. This morning, they were starting out by using X-Acto knives and scissors to cut parts of the rocket from a template printed on paper.

When Velde asked students who wanted scissors, one boy expressed dismay that anyone would bother with scissors when X-Acto knives were at hand.

For Aryaman Shukla, who will be in the fifth grade at Brunson, learning about X-Acto knives had been one of the bonuses of attending the camp. He had used one for the first time ever the day before and was looking forward to using one again.

Aaron Neiberg, who will be in the fourth-grade at Southwest Elementary, was one of the students using the camp as a way to see whether he might want to attend Hanes one day. 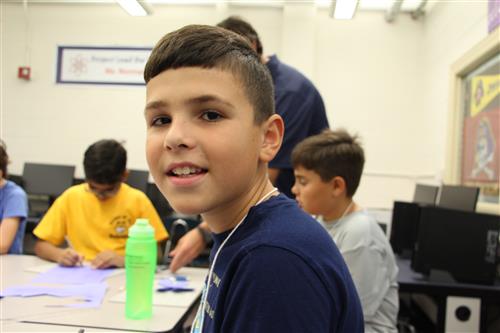 Plus, Aaron said, “I like playing games on computers and making LEGOS.”

So he was particularly enjoying the LEGO robotics class.

One day, he envisions becoming an engineer or designing video games.

Luke Williams, who will be in the fifth grade at Sherwood Forest Elementary, likes math and computers so, when shopping for summer camps, Hanes seemed like the one to attend.

And it has been.

He thinks designing robots would make for a satisfying career.

As Cleo Culler was cutting out her template, she said, that the camp had been fun, in part, because of the focus on making things. 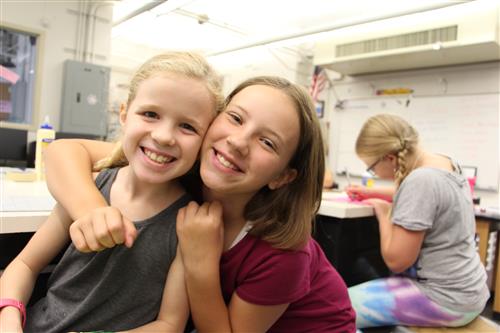 Cleo really likes to sing and hopes to become a professional singer one day. She has already written one song.

Her parents have suggested adding dermatologist to her list of possible careers. They’re certainly supportive of her singing, though. Her father played the guitar when she sang in a contest.

In the classroom where they were working on programming their robots, Jordan Gibson, who will be coming to Hanes this year as a sixth-grader, was working with Max Chen, who went to Hanes last year and will be a seventh-grader this year.

Jordan, who went to Cash Elementary, had already decided to go to Hanes and thought that the camp would be a good way to get a feel for his new school. For him, getting to make and program robots was going a long way to making it a fun experience.

Making and programming robots was also just the thing for Juan Gomez-Reyna, who will also be a sixth-grader at Hanes. 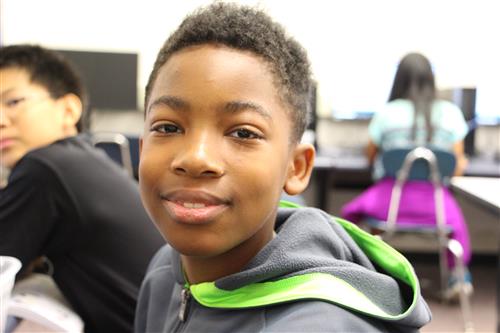 “I want to be a robots engineer when I grow up,” he said.

While the students were working, a 3D printer in the corner of the room was printing parts for the hovercrafts that they will be building today.

Noah Trencher is another member of the sixth-grade class at Hanes.

Asked whether he was programming his robot to make his bed, Noah said, “I wish.”

The camp has been even more fun than he thought it would be, he said.