Easton First-Graders Use Their Imaginations to Make a Giant Mooncake 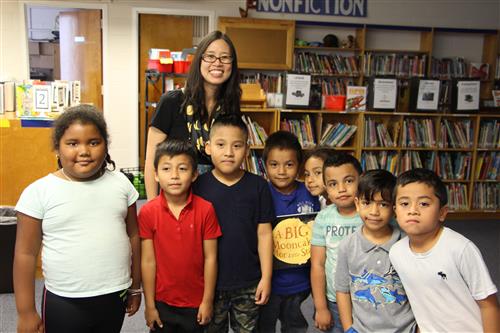 SEPTEMBER 19, 2018 – When writer/illustrator Grace Lin asked the first-graders at Easton Elementary whether they would like to help her make a giant imaginary Mooncake, the response was an enthusiastic “Yeah!!!”

In one girl’s imagination, the Mooncake was so real that she said, “That tastes good!”

A giant Mooncake is featured in Lin’s new book A Big Mooncake for Little Star, which came out in August.

Lin, who lives in Massachusetts, was on a book tour that had already taken her to Atlanta and Asheville. Bookmarks, the literary arts organization that sponsors the Bookmarks Festival of Books & Authors, made sure that her tour included a stop in Winston-Salem to visit with first-graders at Easton. 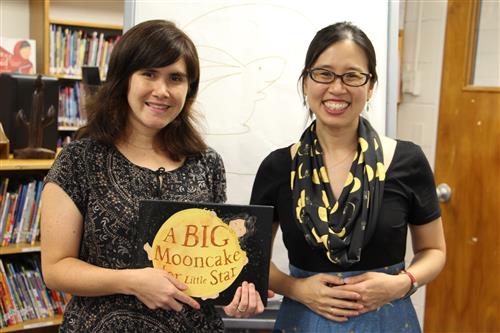 And, thanks to Garner Foods – the makers of Texas Pete hot sauce – Ashley Bryan, the Bookmarks Youth & Schools Coordinator, brought boxes filled with enough books for every first-grader to take home his or her own autographed copy of A Big Mooncake for Little Star.

In the days leading up to the visit, the first-graders had read some of Lin’s books. One of the things that Media Coordinator Kristina Morris likes about Lin’s books is that they introduce students to culture in such countries as China and help give them the understanding that “there is a whole wide world out there.”

Plus, it’s great to be able to meet the person who wrote – and, with Lin, illustrated – a book they have been reading.

As Lin was setting up in the media center before the students came in, she talked a bit about writing.

There’s nothing more rewarding than seeing one of her books connect with young people, she said. “Sometimes it’s magical.” 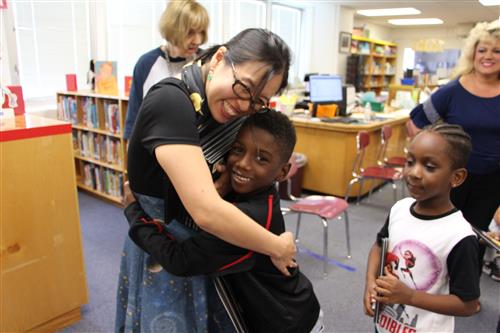 After Morris introduced Lin, she told them that she was born in New Jersey. As they could tell by looking at her, she said, her background is Chinese and many of her books explore Chinese culture.

Her new book is one of them. Historically, farmers and others in China used a lunar calendar, and one of the big celebrations of the year was Moon Festival celebrating the biggest moon of the year and the time to harvest the crops.

The celebration is at night, she said. “Kids get to stay up late.”

As part of the celebration, people bake a giant Mooncake.

When she showed them a photograph a giant cake with people gathered in a circle around it, many students were quite impressed.

From there, they began making a giant imaginary Mooncake of their own.

Along the way, the first-graders learned such intriguing tidbits as, in Chinese culture, people see a rabbit rather than a man in the moon and that you can ask the rabbit to grant you a wish.

“I hope your wish comes true,” she said after she gave them a moment to send a wish to the rabbit she drew for them.

When it was time for questions, more than one student took the opportunity to tell Lin that they liked her story. One girl thought Lin might be interested in knowing that her birthday is coming up. Others did indeed have questions, such as “Why is the moon so big?”

When it was time for the students to head back to their classrooms, Lin, Bryan, and others handed a book to each of the students. Some students stopped to give Lin a hug.

Asked what she thought of it all, Lashea Mack, a first-grade teacher assistant at Easton known as a gifted storyteller, said, “Absolutely phenomenal!”

“She got their attention.”

You can learn more about Grace Lin and her books at Grace Lin.