"Compassion Is an Action and Not Just a Word" 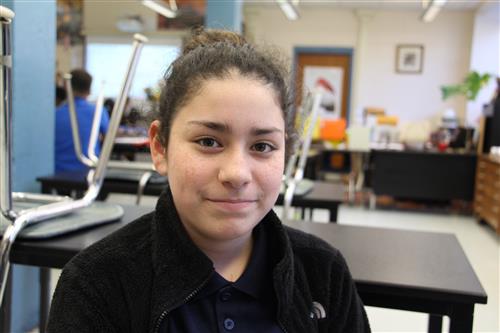 OCTOBER 8, 2018 – On Friday, some students at Meadowlark Elementary stood up in front of the entire school and talked about compassion.

“Compassion is encouraging people every single day,” said Ava Bourgeois, who is the third grade.

Fifth-grader Drew Davis talked about the importance of small acts of kindness, such as inviting someone who looks a little lonely to play with you at recess.

“That small gesture may have turned their day around,” Drew said.

“Compassion is something that cannot be broken,” said fourth-grader Daniela Samaniego.

The occasion for expressing such thoughts was the dedication of the school’s Compassion Corner. As a place where people can sit when they could do with a bit of positive attention, a Compassion Corner serves as a tangible reminder of the importance of treating others with kindness and respect.

"I was very excited when Dr. Raymer told me that we were going to receive a Compassion Corner Bench," said Karen Browder, the School Counselor for grades 3 through 5. "The concept of the bench aligns perfectly with the concepts that myself and Mrs. Pesce, K-2nd Counselor, promote through our Counseling program.”

“We worked with the students in the weeks leading up to the dedication ceremony to be sure that, when the big day arrived, all of our students had a thorough understanding of what ‘Compassion’ really means." 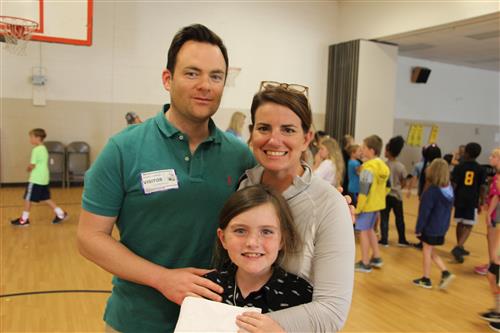 The Compassion Corner at Meadowlark is the latest placed at a Winston-Salem/Forsyth County elementary school thanks to the people with an organization called Compassionate Winston-Salem.

On Friday, Mayor Allen Joines, along with Truman Dunn and Sue Carlton of Compassionate Winston-Salem were among those who joined Principal Neil Raymer on stage for the ceremony.

“We must begin each day with compassion,” Raymer said to everyone. “A compassionate school and community begins with you.”

As part of the ceremony, the students in the fifth-grade chorus sang with music teacher Janice Ward leading them, and students spelled out “Compassion” by having one student at a time hold up a letter. 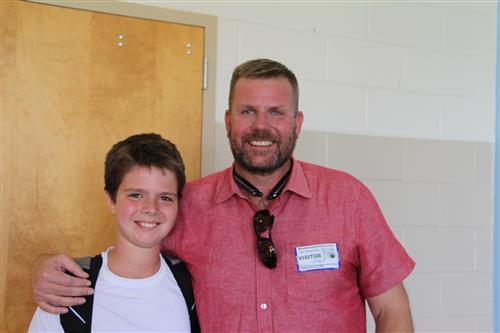 Adam Cofer, who is in the third grade, held up the letter C.”

Adam’s mother, Tammy Cofer, was among a number of parents present. When getting dressed that morning, she said, Adam told her, “I’ve got to look like church today.”

Fifth-grader Remy Conwell read a poem she had written for the occasion. You can read it below.

After the ceremony, Reese Robertson, who had been the letter “M” in “Compassion,” joined her mother Erin Robertson. Reese said she was happy to be the letter “M.” If she were picking her favorite letter, though, it would be “R” because that is the first letter in her name.

After the ceremony, Ava joined her parents, Lee and Holly Bourgeois. To get ready, she said, she had recited her piece to her parents maybe 30 times. 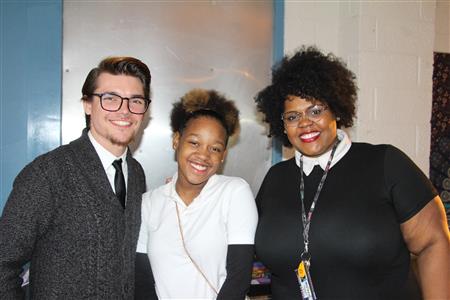 Speaking had been a good experience, Ava said. “I was kind of nervous but I was also excited because I was doing good.”

Drew joined his father, Brad Davis. Drew said he had been a little nervous beforehand – that was definitely the biggest group he had ever spoken to. It had turned out to be an enjoyable experience.

Drew is a good person, his father said.

“He cares,” Brad Davis said. “He is going to, without a doubt, make a difference in the world. I call him ‘My Difference Maker.’”

Drew had good things to say about his father as well.

“He’s caring,” Drew said. “He spreads kindness every time he can.”

The Compassion Corner sits at front of the school near one of the playgrounds, and, before the dedication ceremony, kindergarten teachers Robin Siega-Riz, Heather Douglas, and Sally Tarvin were out with their students. The importance of being kind to others is something they start teaching in kindergarten, they said. 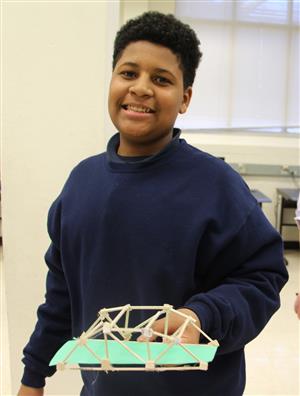 One way they do that is to make sure they always treat their fellow teachers and other adults at the school with kindness.

“I think it’s important to be a model and example of compassion for the kids so they know how to treat each other with compassion,” Douglas said.

“We make a point to be kind to teach other, and we expect the children to do the same with each other,” Tarvin said.

While second-grader Mason Winter was waiting in the office for his mother to pick him up, he agreed to come out and have his picture taken on the bench with Principal Raymer.

“If you don’t be kind, it might hurt someone’s feelings,” Mason said.

When his mother Carla Winter arrived, she said that Mason is always kind to others. 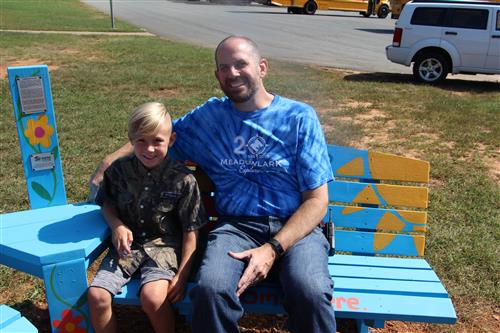 Lori Mottesheard, who teaches art at Meadowlark Elementary, designed the artwork for the bench and oversaw the students painting it. .

“My mind started twirling with ideas of ways to illustrate compassion once we received our benches,” Mottesheard said.

“I sketched several ideas and decided that the colorful, simplistic flowers with the bright sun would be the most appropriate way to show what we think of as compassion – being kind to others and cheering others up... making someone who is having a bad day feel better... listening to others and helping friendships grow.”

“The phrase ‘Kindness blooms here’ naturally sums up the image and our message.  Hopefully, the bright colors will also help bring many happy smiles.”

“Our PTA  President, Jessica Potts, has been very helpful throughout the painting process.  She had the benches at her house to first prime them and then add the base coats of blue paint. Once back at school, we set the benches up in the hallway alcove for all students and visitors to observe as students from the Kindness and Compassion Council began to paint the design.” 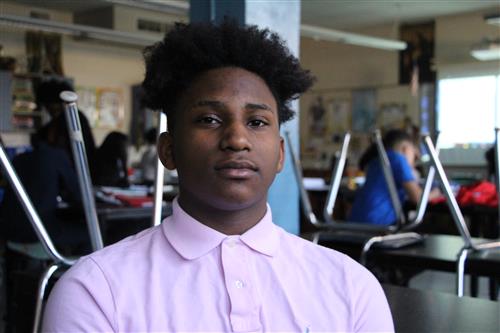 “I drew it first with chalk, and the students painted the design. I supervised the painting and added final touches before we sprayed the final clear protective finish. Mrs. Browder, our 3-5 School Counselor, also helped with supervising students as we wrapped up the final painting.”

“The excitement was contagious! It really did bring attention to the benches and gave a tangible aspect to the lesson of compassion. I enjoyed this project very much and look forward to seeing students use the benches to help spread kindness for one another.”

Before Friday, eight elementary schools in the district already had Compassion Corners. Another five are on the way. In the coming weeks, Compassion Corners will be dedicated at Jefferson, Clemmons, Rural Hall, Cook and Kimberley Park.

Habitat for Humanity of Forsyth County has taken responsibility for designing and building the Compassion Corners. Along with Dunn and Carlton, the group present at the dedication included a number of people associated with Compassionate Winston-Salem and with Habitat: Jerry and Sybil McLeese, Anne Collins, and Cindy Wright. Wright has developed a curriculum to help schools integrate the Compassion Corners into school life.

Two members of the Winston-Salem/Forsyth County Board of Education – Lida Calvert-Hayes and Marilyn Parker – were there along with Kathy FitzJefferies, the school system’s Program Manager for Safe and Drug-Free Schools. 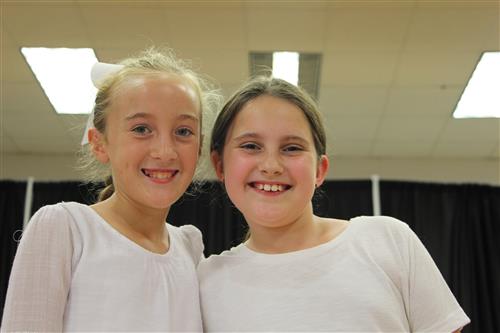 Compassion is very important to me

But what does it really mean? Let’s see

It means that when other people experience trouble

Someone steps up to burst their tough times bubble

It means supporting each other when things go bad

And coming up with ways to help them feel glad

Bullying is not nice; in fact it is rude

But compassionate people can change the mood

One I notice my friend curled up head to knees

I said to her, “Tell me what’s wrong if you please.”

She told me her pet had died, her pup

I sat down beside her, show her some love, and then she cheered up

You see, compassion is an action and not just a word

It shows you care and lets other’s be heard

So try it yourself, when people have a bad day