We Are All Butterflies 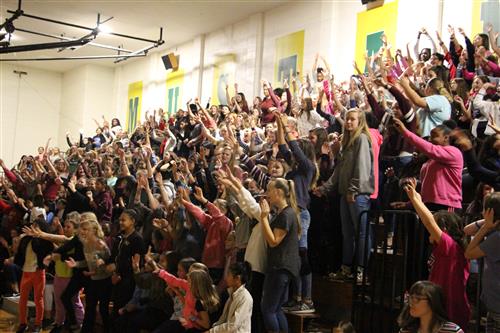 I used to hide and keep inside
Afraid to show the world who I was
In shades of gray, I'd spend my days
So invisible because
They'd always put me down
Yeah, I let 'em keep me down

But look at me now, look at me now
Finally comin' out and I'm wantin' to fly
Gonna spread my wings, bright and colorful things
Let 'em take me up and touch the sky
They thought they knew me plain and shy
But all along I was a butterfly 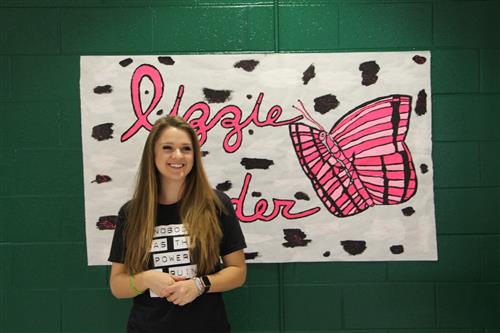 NOVEMBER 13, 2018 – Lizzie Sider wants all young people to know that inside each of us is a butterfly.

On Thursday, Sider came to Meadowlark Middle to deliver that message through such songs as “Butterfly” and stories and observations about the lessons she learned from being bullied when she was young.

In “Butterfly,” Sider sings of discovering that she is unique and it’s up to her to become the person she is meant to be.

“I love her song and her message in it,” said Meadowlark seventh-grader Jseyana Daniel. “The lyrics touched me.”

The song using a butterfly to make its point makes it especially meaningful to eighth-grader Tabatha Klub.

“I love butterflies,” Tabatha said. “I have liked butterflies ever since I was little.”

Before everyone gathered for the formal program, Jseyana, Tabatha, and seventh-grader Ashlyn Santiago were among those who had the good fortune to be able to visit with Sider for a bit outside the gym.

“Breathtaking” is how Ashlyn described the experience afterward.

On Sider’s visit to Meadowlark, she directed her message to girls in particular. Joining the 600 girls who attend Meadowlark Middle were another 100 fifth-grade girls who go to nearby Meadowlark Elementary. (Although the boys at Meadowlark Middle didn’t see Sider’s show, they had had their own special experience in October when BMX superstar Justin Posey visited with the boys.)

This was Sider’s second visit to Meadowlark Middle.

The connection with the school was made through Principal Joey Hearl. Two years ago, Hearl said, there was a time when it seemed as if girl after girl was coming into the guidance office expressing pain at being bullied.

Having three daughters of his own made him even more sensitive to what life can be like for girls that age. When he discovered that Sider was appearing at an outdoor concert in the area, he said to himself, “Man, that is what our girls need at our school.” 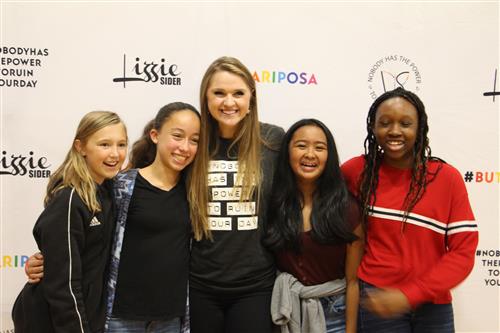 So he sent Sider a heartfelt email, saying, “Our girls need to hear you.”

It was a great experience for everyone, Hearl said. “It was awesome.”

Sider didn’t charge the school for that visit nor did she charge for this visit. As everyone was coming into the gym on Thursday, Hearl said he hoped that everyone had a great time while receiving an important message.

Flanking the doors to the gym were Lizzie Sider posters done by two Meadowlark Middle students.

One was by eighth-grader Kelly Lee. She was a sixth-grader when Sider visited the first time. When she was asked to do a poster, Lee said, “I was really excited because art is my No. 1 thing, and she is such a good person.”

The other poster was by eighth-grader Avery Moore.

Once 700 girls were seated in the bleachers, Hearl came out and said, “Who is ready to see Lizzie Sider?” 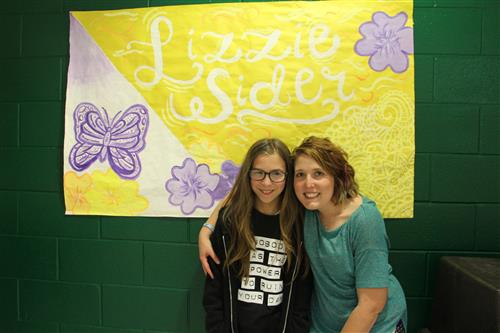 The stomping and yelling produced enough energy to provide electricity for all of Forsyth County if Duke Energy had a way to harness it.

“I am not bringing her out until you get LOUD!” Hearl said.

The energy increased to a level that could have powered both Forsyth and Davie counties.

“I want to tell you all a story,” Sider said. “I was bullied by the same group of girls over and over every single day. What they said and what they did stripped all of my confidence from me.”

Then, one day, she said, her father said, “Nobody has the power to ruin your day.”

His statement came at just the right moment to spark something inside of her, and she realized that everything she needed to come out the other side was inside of her.

“We have a choice of living our lives out of love or out of fear.” 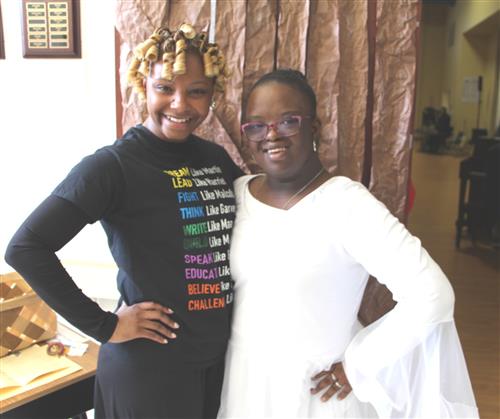 Along the way, Sider mixed songs with other thoughts and observations.

“We are all butterflies,” she said at one point.

After the formal event was over, Sider invited everyone who wanted to come have a picture taken with her. The line was a long one.  Some girls had a picture taken individually. Others in a small group.

Sider is on a cross-country tour that has taken her to schools in such states as California, Nevada, Texas and New Jersey, and, from here, she was headed to Chicago. Wherever she goes, she sings and shares her story. At Meadowlark Middle, both of Sider’s parents – Don and Carole Sider – were with her.

When asked whether he knew he was delivering a life-changing observation at the time, Don Sider, smiled. Not at all, he said. “It just came out of my mouth. I didn’t plan it.”

After having her picture taken with Sider and with teacher Cailin Beck, sixth-grader Kaylen Lawless said it had been a good experience.

“It was fun,” Elizabeth said. “It was very energetic and upbeat.”