Filling the Bus at Southeast Middle 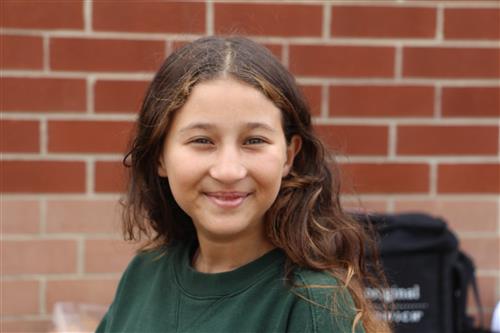 Through Second Harvest Food Bank of Northwest North Carolina, the food will be given to families in the community who need it. Some of the food may end up in the homes of students in the Kernersville community.

“I love the feeling of helping other people,” Kristina said. “I cannot imagine not having food for Christmas.”

Her father, Jeff Oberlin, who teaches at Southeast Middle, also participated in the project. The Oberlins had lots of company in striving to help others. Students and staff members throughout the school brought in cans, packages of ramen noodles, and other nonperishable food items.

“They are not just bringing one can,” said Principal Stephanie Gentry of Southeast Middle. “I think this is important to them.” 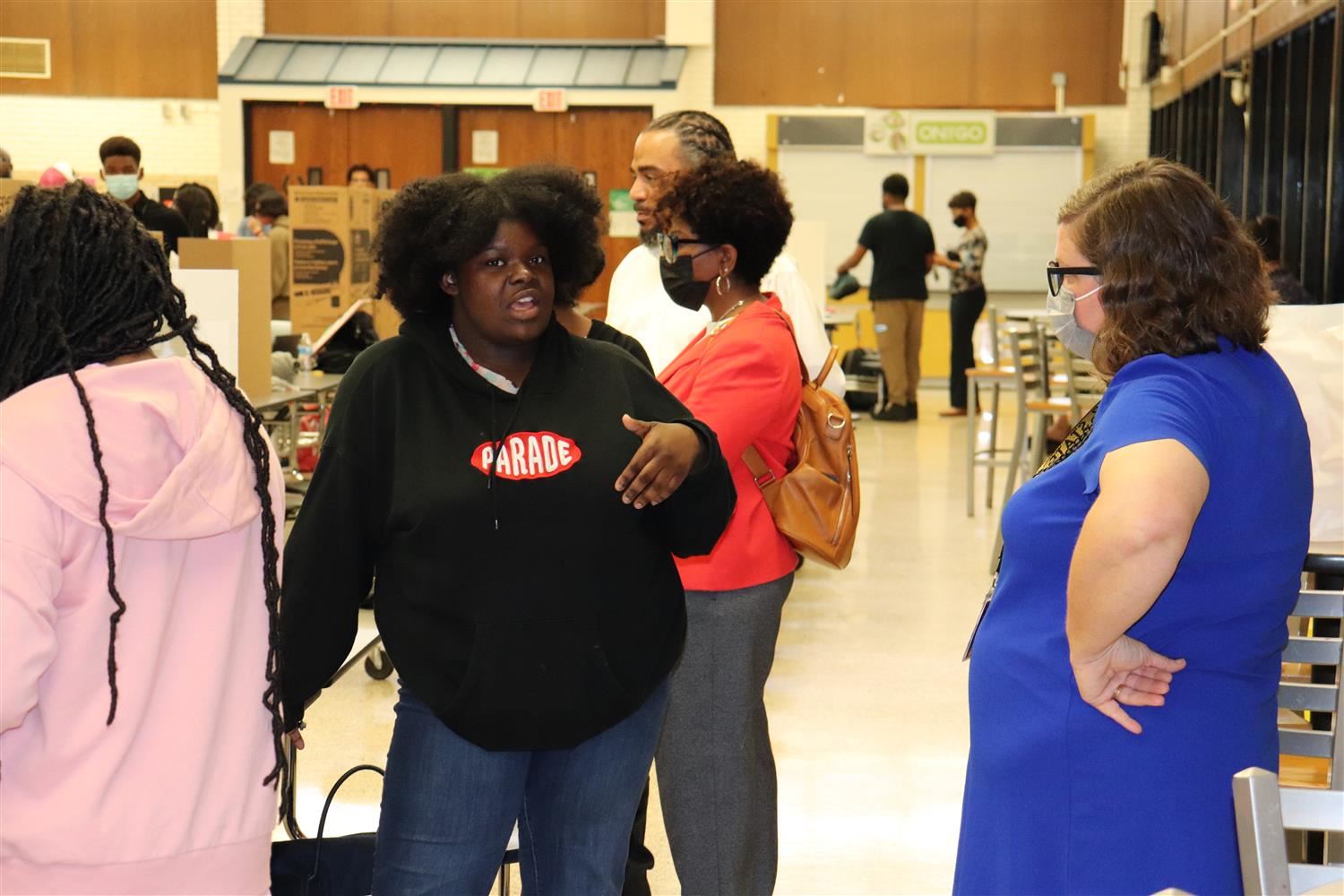 The campaign was also a good way to bring the community together, Gentry said.

Students, parents and staff members at other schools in the Kernersville area – including Sedge Garden Elementary, Caleb’s Creek Elementary and East Forsyth High – also participated. By the end of the day, more than 8,700 nonperishable food items, along with $760 in donations, had been donated.

To add to the fun, several “lock-ups” were held throughout the day. People were “arrested,” and students and staff at each of the principals’ schools help raise “bail” by donating to their contributions a particular person or group, with the person or group receiving the highest number of donations getting bragging rights.

In one competition, Gentry was “jailed” along with Principal Donald Wyatt of Sedge Garden and Principal Rita McPhatter of Caleb’s Creek.

Students brought their food items to the bus parking lot, where the “Fill the Bus” bus was parked. Next to it was a trailer with bars borrowed from the Kernersville Police Department. Three members of the Southeast PTA – Dawn Rhymes (president), Cathy Brown (secretary), Cheryl Hancock (treasurer) –  were on hand to keep track of all the donations. 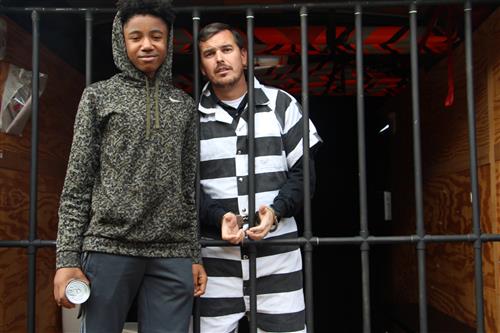 Wyatt as having big fun mining for sympathy from students as he stood behind the bars in the trailer looking sad dressed in the classic jail attire of overalls with black-and-white stripes. Gareon Greene, who is now an eighth-grader at Southeast, was one of the former Sedge Garden students who stopped to say hello to Wyatt. 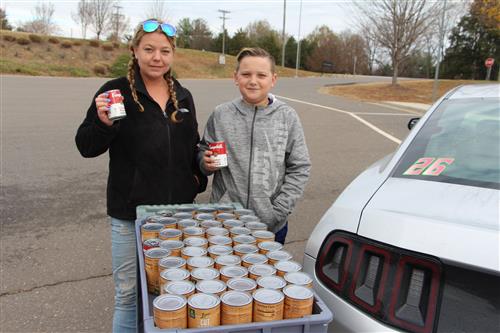 During that competition, April Myers, who drives a school bus for Winston-Salem/Forsyth County Schools, showed up with 53 cans of vegetables and soup for her son, Haylen, to contribute. Haylen said he just wanted “to give back to the people who don’t have what we have.”

He planned to donate some of the cans to bail out the social studies teachers and some to bail out Gentry when she was jailed later.

Gentry is a great principal, he said. She truly values the opinion of every student and asks them what she can do to make the school better.

“It’s helping people who can’t afford their food,” he said. 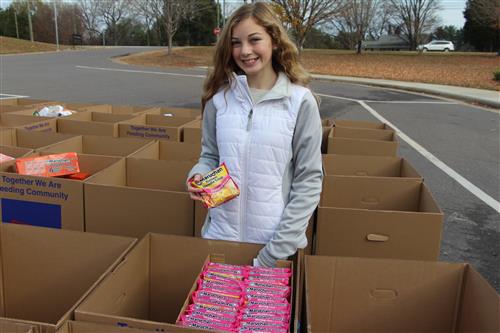 “A lot of our friends came and helped out by donating,” said Alex Warren, the student council secretary.

Alex helped the student’s cause by bringing in 36 packs of ramen noodles “to help other families so they won’t go hungry.”

For Christian King, the vice president of the student council, the reason the students got bragging rights was straightforward.

Christian was happy to participate in a project “to give good to people who need it more than we do.”

Kottenbrock was good-natured about his defeat.

“I gave it a good effort,” he said. “I knew that the student council would win out in the end.” 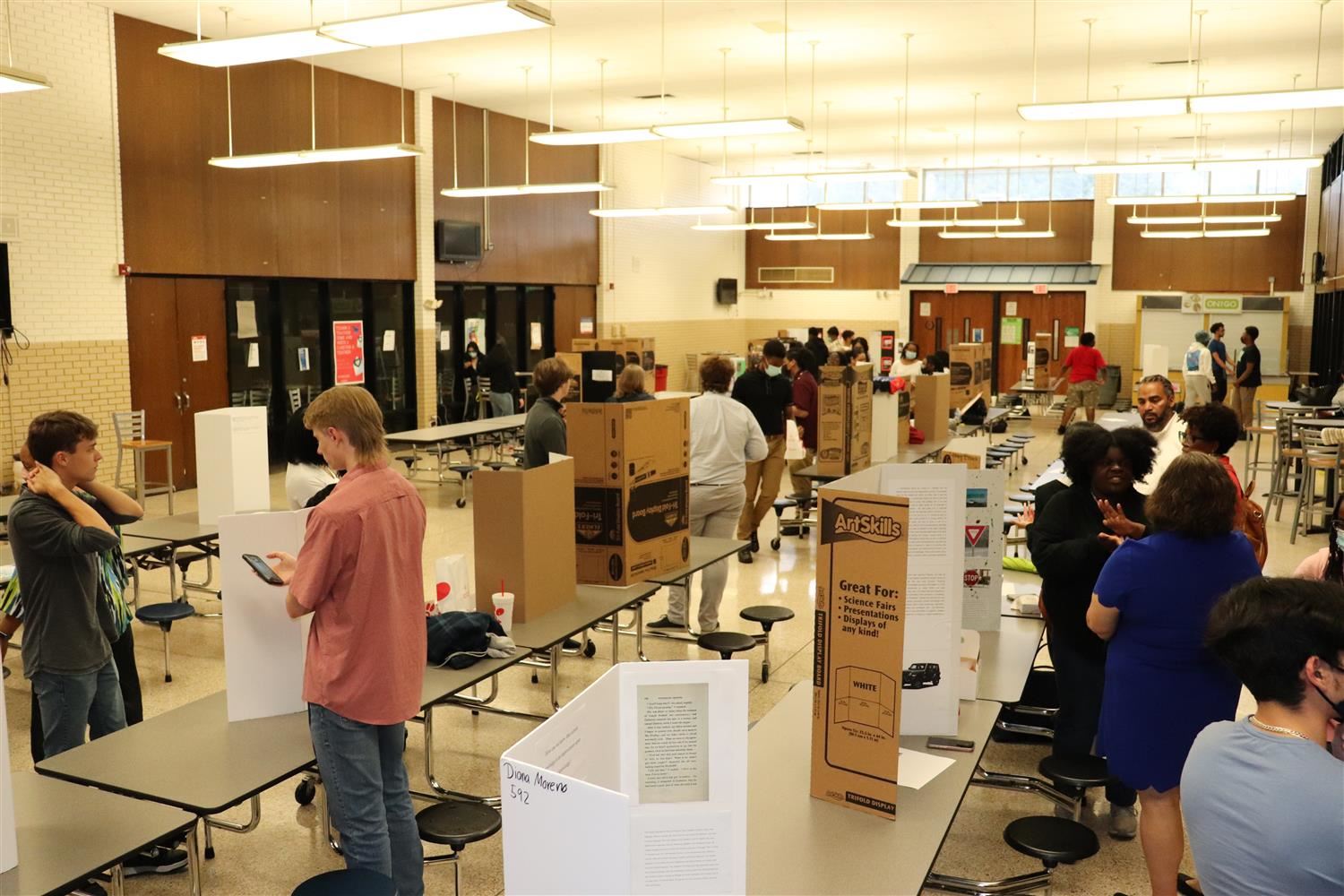 At one point, Principal Rodney Bass of East Forsyth High dropped by to give Gentry a check for the $630 that students and staff members at East Forsyth had contributed.

A number of businesses provided food for snacks and other support for Fill the Bus campaign. They included: