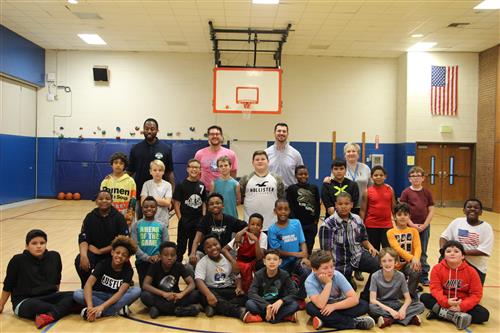 DECEMBER 5, 2018 – Eva Bishop, who grew up in Indiana rooting for the Indiana Hoosiers, is a life-long fan of basketball.

“I love basketball,” she said.

She knows basketball has a lot to teach young people, and she knows that boys in elementary school look up to players in high school.  So, when she became the school counselor at Jefferson Elementary this past summer, she knew just want she wanted to do – see whether she could find high school players to serve as mentors for boys at Jefferson.

“I want these boys to hear about setting goals, becoming leaders, and fully dedicating to where they want to get in life,” Bishop said.

Many of the boys at Jefferson go on to high school at Mount Tabor or Reagan. So she approached the coaches of the varsity teams at those schools – Andy Muse at Mount Tabor and Jeff Overby at Reagan – about the possibility of creating a partnership. 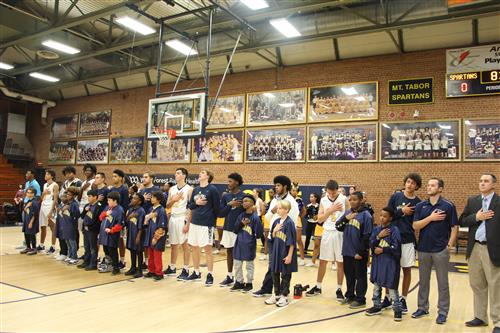 Both men thought it was an excellent idea, and they asked all of the players on their varsity squads to participate.

“I knew my guys would not only embrace it but enjoy it,” Overby said.

It was also a great way for his players to see the value of giving back to the community, he said.

Muse said, “It’s a great thing for the Jefferson students. They get to look up to some players.”

And it’s way for his players to serve young people, Muse said.

Each high school player was paired with a fourth or fifth-grade boy at Jefferson. In November, everyone met when the Reagan and Mount Tabor players came over to Jefferson for breakfast one morning.

Just seeing the expressions on the faces of the Jefferson students made it all worthwhile, Overby said. “Those kids’ eyes were big.”

Plus, Overby enjoyed being able to spend time with his players in that way. 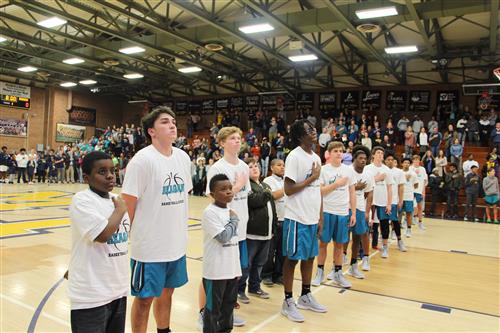 Before heading to Mount Tabor, the Jefferson boys had spent the afternoon working and playing together.

Bishop’s husband, Kishon Bishop teaches health and physical education at Walkertown Middle and is the founder of the Blue Chip Basketball Academy. He was there, along with Jefferson teachers Matthew Snow and Mark Fanning who are also participating in the mentor program.

Everyone met in the gym. For starters, they went through some basketball drills designed to help the boys connect with each other as teammates. Along the way, Kishon Bishop made such points as the importance of not giving up after you make a mistake.

During the drills, several of the boys took a break to talk about meeting their mentors. Some of the boys at Jefferson hope to play basketball in high school, college or in the NBA one day. For others, basketball is simply a sport they enjoy right now. For all of the boys, being able to spend time with the high school players is great. 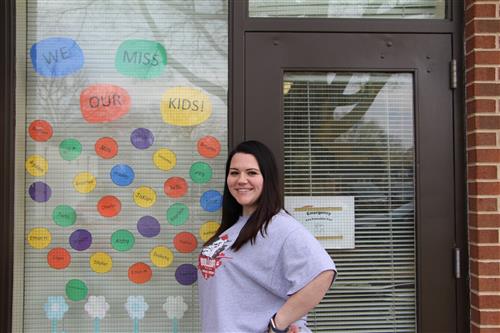 Gabe Messer, who is paired with a Reagan player, said that, before they met their mentors, Ms. Bishop gave them some suggestions for things they could talk about. One suggestion he used with his mentor was what each one would do if they had $40 to spend on whatever they wanted.

“I would buy a bunch of little things – anything that cost a dollar,” he told his mentor.

Gabe’s long-term plans include joining the Army and becoming an electrician. For him, basketball is simply something he enjoys.

“I think basketball is fun, and it’s a good way to work with your brain and memorize plays to be a good player,” Gabe.

Braydon Williamson, who is also paired with a Reagan player, likes basketball a lot.

“You get to dribble and you get to shoot and you’re working as a team,” Braydon said.

He thinks it would be great if he plays in high school and college and goes on to play in the NBA. 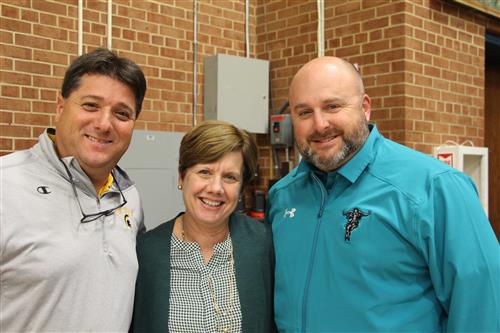 “We talked about, when you play basketball, you have to play fair,” Braydon said.

With a Reagan student as a mentor, he was certainly going to root for Reagan. Mostly, though, he was just excited about going to see the game.

“I want to play for any team that needs help,” Kris said.

Along the way, he wants to make a good impression.

“I want to show people I am good at the game,” he said.

With his mentor, they told each other a bit about who they are. 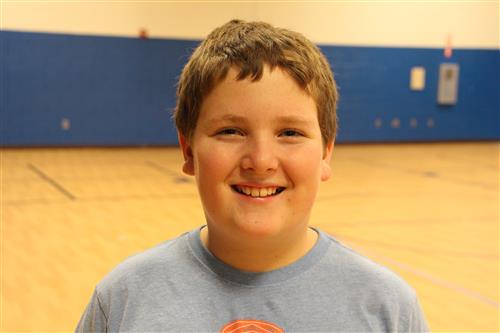 “I like food, sports, and making people laugh,” he told his mentor.

He was looking forward to “seeing my basketball buddy do his best work.”

Kuba Jabczanik, who is used to having to spell his last name for people, is also paired with a Mount Tabor player.

He enjoys basketball. Soccer is more his game, though. “It’s more using my legs than using my arms,” he said.

When he visited with his mentor, they chose the suggested topic of “Would you rather scream or whisper when you talk?”

That was an easy one for Kuba – he would rather whisper. His mentor also told Kuba that he would probably meet the player’s mother when he goes on to Jefferson Middle next year because she works there. 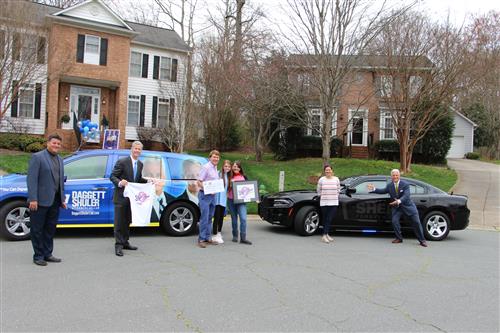 After a supper of pizza, the Jefferson boys and the adults headed to Mount Tabor. All three principals – Debbie McIntyre of Jefferson, Ed Weiss of Mount Tabor, Brad Royal of Reagan – were there for the game.

For McIntyre, the mentor program is a great way for the Jefferson boys not only to build relationships with high school students but also with their fellow Jefferson students “through a sport they all love.”

“All, it’s about self-confidence and making positive choices in their lives,” McIntyre said.

Weiss said, “I think it’s an opportunity for our high school student athletes to realize how much of a teacher role they play with it comes to a young person.”

Weiss also likes that Reagan and Mount Tabor are working together to make the program possible. 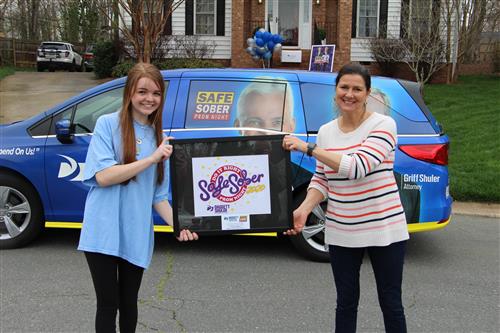 “It’s just helping kids,” he said. “I think that can only be positive.”

“For our kids at Reagan, it gives them an opportunity to give back to the community,” Royal said.

For the students at Jefferson, getting to know an older role model can make them more excited about learning.

Before the game, players from both high schools talked about participating in the program.

“I thought it was a good idea – a great opportunity,” said Aaron Muse, whose father coaches the Mount Tabor team.

David Craver said, “When Coach Muse introduced the idea to us, I was all aboard. I think these kids really look up to varsity basketball players.” 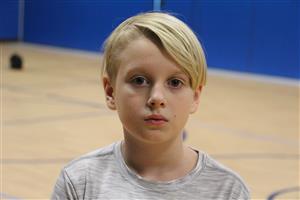 Through basketball, Craver has become more confident and has learned other things that help make him a better person and he hopes to help the Jefferson boys do the same.

Duncan Smits said that, when he was at Meadowlark Elementary, he participated in a buddy program with an older player. It meant a lot to him, he said.

“It made me want to keep playing basketball.”

So he is happy to be able to do the same for the Jefferson boys.

“I want the kids to have someone to look up to,” he said.

It gives the Jefferson boys someone to look up to, he said. He did not have a high school role model when he was their age. “I think I would enjoyed it.” 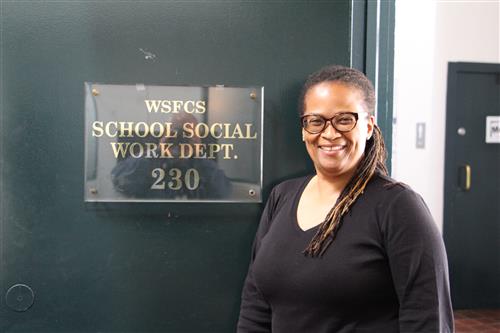 Reagan senior Patrick Travatello said, “It’s been a great experience. To see how much it means to them has been heart-warming.”

When Travatello was younger, he was able to spend time with his older brother and his brother’s friends. Now was great for him and he’s glad to be able to that for someone else now.

The plan is for the Reagan and Mount Tabor players to come over to Jefferson once a month through March.

The program is going beyond the connection with the two high schools.

Both Eva and Kishon Bishop went to Piedmont International University, where Josh Howard – who played basketball Wake Forest University before going on to play in the NBA – coaches. They know him, and he has already come to visit with the Jefferson boys.

The Bishops are also friends with Rusty LaRue – who also played at Wake Forest before going on to play in the NBA – and he is coming to Jefferson in January.