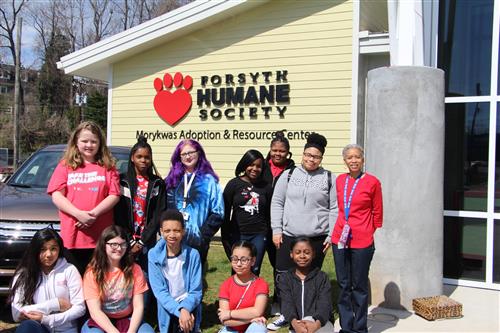 MARCH 21, 2019 – While walking on the Reynolda estate one day, someone looking for a dog may see what looks like the perfect dog walk by.

And, lo and behold, the dog is wearing a bandana that says “Adopt Me!” When the person asks the dog walker, he or she learns that the person a volunteer with the Forsythe Humane Society and that the dog is indeed available for adoption.

When the dog has found its new home, the dog and its human will have students at Northwest Middle to thank for making the connection.

As a project, the seventh- and eighth-graders in the Northwest chapter of the Family, Career and Community Leaders of America (FCCLA) made 50 bandanas that say “Adopt Me!” for dogs to wear.

After school on Wednesday afternoon, Khadija Edwards, who teaches Family and Consumer Sciences and serves as the advisor for the FCCLA student organization, hopped on an activity bus with 11 members and headed to the Humane Society’s adoption center on Country Club Road to present the bandanas to the people at the Humane Society. 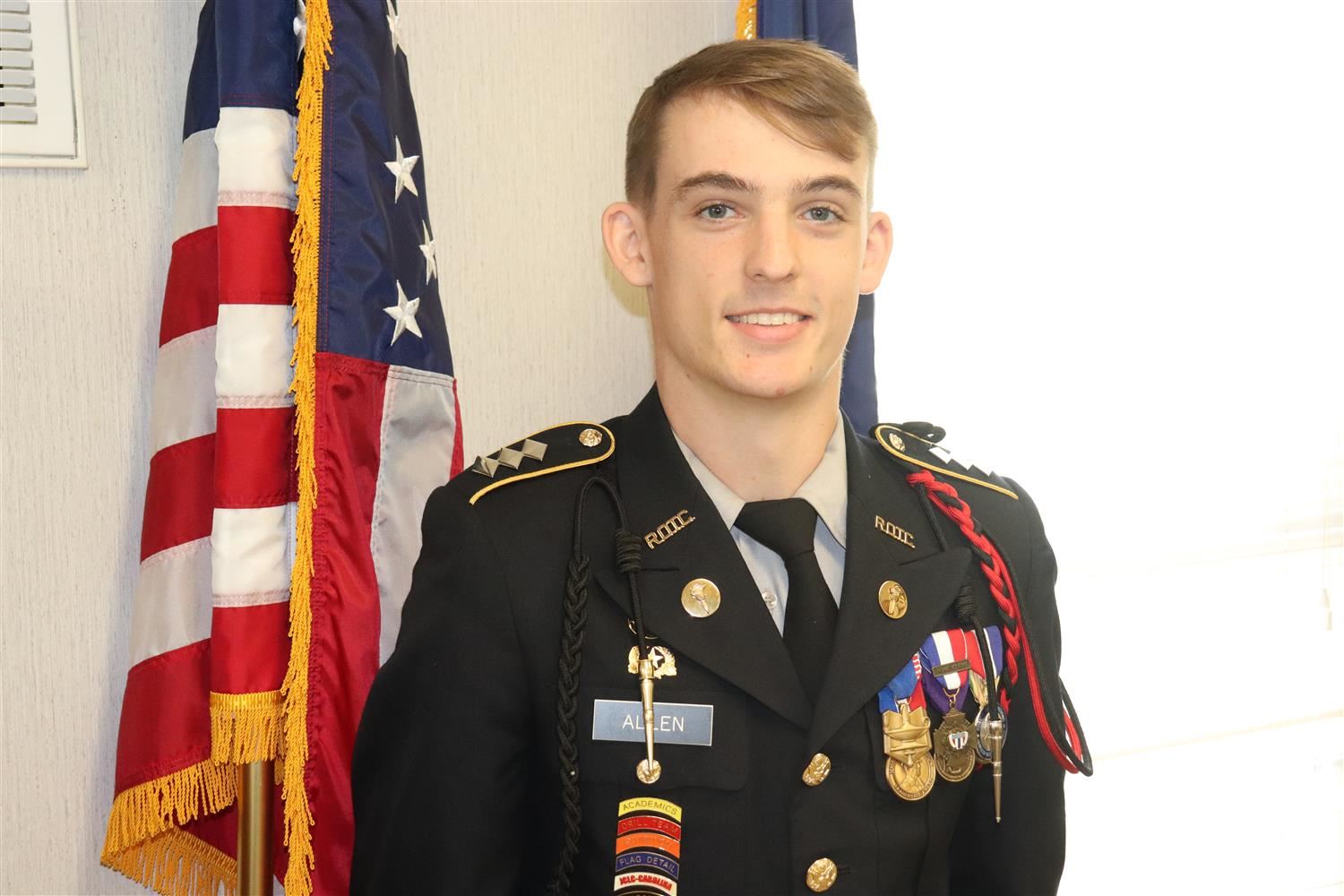 All three dogs were available for adoption. Student Paula Miller was particularly taken with Red, who along with being sweet like the other dogs, was a touch shy.

Thinking that she could help Red become less shy and that Red would make a wonderful addition to her household, Paula immediately sent a picture and message to her mother suggesting that they think about adopting her.

Students said they really enjoyed the “Adopt Me!” project.

“I am an animal lover and I really love to help out,” said Carolina Cates.

“I liked that we helped animals, and it made us feel good about ourselves,” said Maria Hernandez. “It gave us an opportunity to work with each other and that was really fun.”

“I liked doing the painting part,” she said. “I love doing art, and I loved it was going to help dogs. I’m a big, huge animal person.” 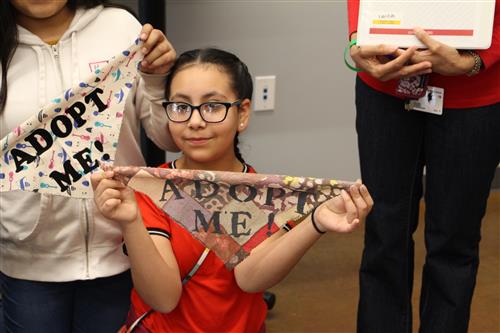 Ahmad Johnson likes thinking about how the project will help get dogs adopted.

Before the students headed out to meet more of the cats and dogs there, Parks, who is the society’s Event & Development Coordinator, talked to the students about some of the ways the society serves animals.

One thing students learned along the way is that, from the ages of 12 to 15, they can volunteer if a parent or other adult accompanies them, and, at the age of 16, they can begin volunteering on their own. They also learned that organizations such as Scout troops help out by doing such things as making beds for the dogs to sleep on.

Students learned that, when the society takes responsibility for kittens and puppies, they first go to foster homes until after they are spayed or neutered and until they are a little bigger. It’s not unusual for the people in their animals’ foster homes to fall in love with the animal and decide to keep it.

After visiting with Parks and the three dogs, the students divided into two groups. For the group led by DuPre, who is the Development Coordinator, stops included the pantry where food to give to people who need assistance with their animals is stored, the laundry room, the Meet & Greet area where people can visit with a possible new pet, and the walking area outside. 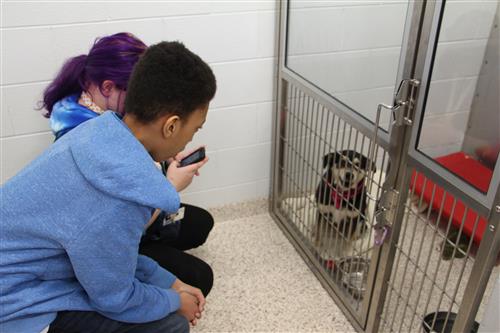 And, of course, they visited the areas where people can see the cats and dogs waiting to be adopted.

Each year, the FCCLA chapter takes on projects that serve the community. Last year, projects included students volunteering at a daycare center and retirement center. This year, Edwards said, students wanted to do something connected to animals. When she did some research, she learned that groups elsewhere had made “Adopt Me!” bandanas.

The project was great in a number of ways, Edwards said. Students were giving back to the community. They were developing leadership skills. They were being creative, and they were working together as a team.

Getting the materials to make the bandanas worked out well. As it happened, the chapter had plenty of fabric left over from previous projects. A.C. Moore, which is an arts and crafts store, provided a grant for the inks and other supplies necessary to turning the fabric into “Adopt Me!” bandanas. 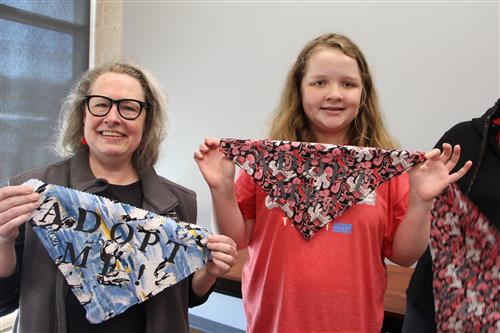 This was the first time that a group had provided such bandanas to the Forsyth Humane Society, said Williamson, who is the Executive Director.

“It’s fantastic that they thought about the animals,” Williamson said.

“We love it. It’s something we really need…This is an amazing act of generosity.”

When the members of the chapter made the presentation, Williamson said that volunteers walk dogs at the Reynolda estate on weekends, and the bandanas would be great for letting others know the dog was available for adoption.

Along with the shelter on Country Club, which can hold about 100 dogs and cats at a time, the society also oversees the Forsyth County Animal Control shelter on Sturmer Park Circle off University Parkway, which can handle about 200 cats and dogs.

In 2018, the society placed 4,372 cats and dogs. Most of those were adopted. Some were reclaimed by owners who had lost them, and some were transferred to other organizations, such as groups that specialize in a particular breed. 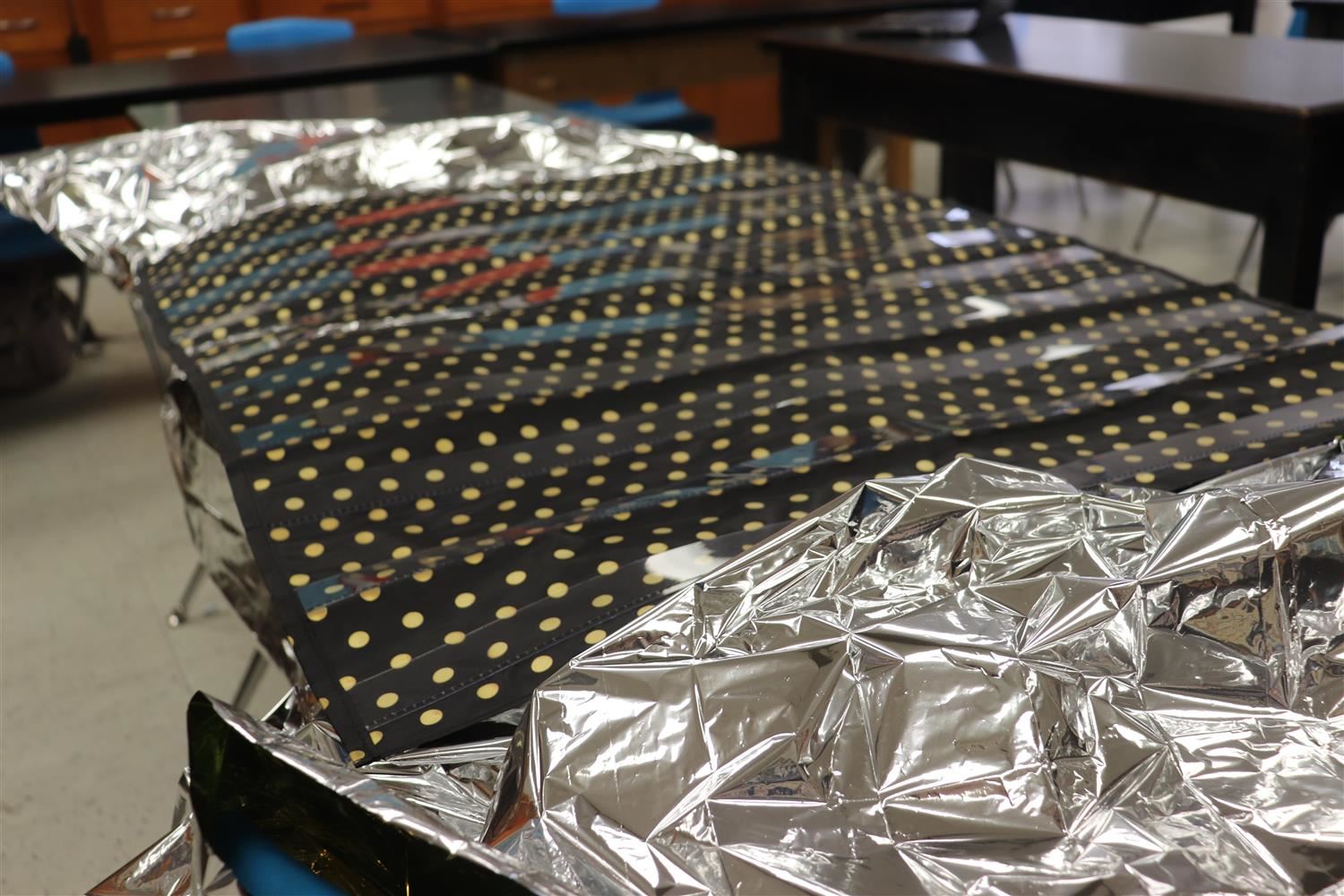 The Northwest students making the trip to the Forsyth Humane Society were: