"My Life in a Nutshell"

Third-graders at three elementary schools – Walkertown, Old Richmond and Southwest – have created stories of their lives in photos, and, from 5:30 to 7:30 p.m. on Tuesday April 30, the photo stories will be on display at Unleashed Gallery at 630 N. Liberty Street in downtown Winston-Salem.

For more Walkertown pictures, go to Your Permanent Record.

For Southwest pictures and comments, go to Southwest. 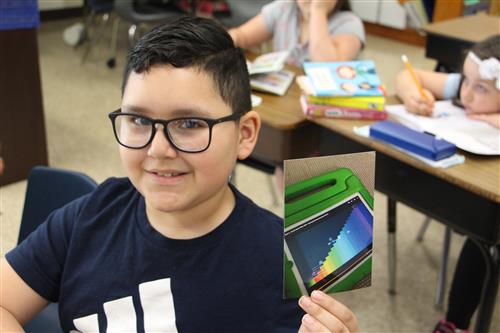 APRIL 25, 2019 – When the third-graders in Kelly Lintner’s class at Walkertown Elementary began taking pictures to illustrate their lives, Andrew Espinal took a picture of his iPad.

Holding up the photo, Andrew said, “My life in a nutshell.”

He uses the iPad to play such video games as Minecraft and Plague Inc. Left to his own devices, he said, he would be happy to play these and other video games 24 hours a day.

“I want to grow up to be a game designer,” Andrew said.

Alyssa Bogert illustrated her life with such pictures as her grandmother and grandfather standing in front of their house and the ball field where she goes to play softball.

Alyssa said she has thoroughly enjoyed the project.

“I like that I get to take pictures about my life and places I like to go,” she said. 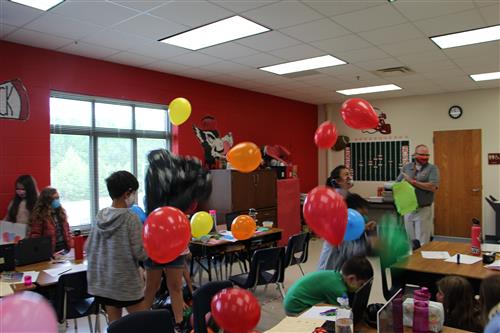 On Tuesday April 30, the photo stories that Alyssa and Andrew and other students in Lintner’s class have been creating will be on display at Unleashed Gallery on Liberty Street in downtown Winston-Salem. Two other Winston-Salem/Forsyth County elementary schools – Old Richmond and Southwest – are also participating in the show.

When Lintner heard about the project, she wanted her students to participate.

“I love photography, and I wanted to share that with them,” she said. “It lets them learn a little more about themselves and the county.”

After taking the pictures, the students had them printed and brought them to class. Earlier, they had written a story to go with them. On Tuesday, it was time to write captions for their pictures. To help them, Lintner showed them the story of her life that she had created. The captioned pictures included the hospital where she was born, pictures with her family, and a picture with her husband before they got married.

Along with way, she asked students whether they knew what it meant to have a grandfather “wrapped around your finger.”

Alyssa raised her hand. When Lintner called on her, Alyssa said, “It means you can get them to do what you want…I have my granddaddy wrapped around my finger.” 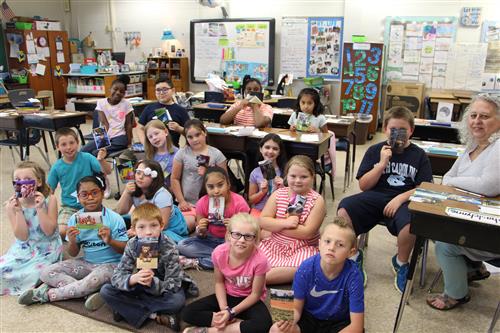 After Lintner talked a bit more about the importance of including details in the captions that help give people a fuller picture of their lives, the students went to work.

Patrick Fulton’s pictures included his sister in her garden, his cat Cheeto, and the flags that his neighbor who served in the 82nd Airborne Division has displayed in front of his house.

He, too, had been enjoying working on the project.

“I like it because we get to take pictures of something we do every day,” Patrick said.

The story of her life that Johnea Spease was telling in pictures included her baby sister and her hover board, which she had wanted for a long time. Learning to use proved to be “very complicated,” she said.

Earlier, Johnea had gone to the office to get a baggy of ice to provide some relief to the lip she hurt during recess when she was looking back while running and bumped into a pole. The ice had helped, and she was feeling better.

Khloe Warden estimates that, with her own dog and lots of relatives with dogs, she has perhaps 10 dogs in her life.  So she took lots of pictures with dogs. 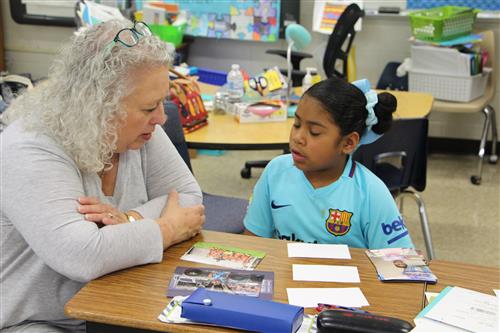 “I really like that we get to tell what we do in our lives,” she said.

Khloe thinks that, after people look at the pictures, they will have a better idea of who each student is.

People who look at Anthony Cox’s pictures will see that he is a fan of monster trucks. One picture shows a full-size monster truck taken when the family went to see a show and another shows a miniature monster truck among his other toys.

They will also meet his stuffed bear Cooper as well as his mother and father.

Wyatt Clayton’s pictures included one of a group of alpacas.

The family would cut the fleece and sell it. These days, they have only one alpaca.

Wyatt’s pictures also included a photo taken at the fair and a picture of his father driving away to work. 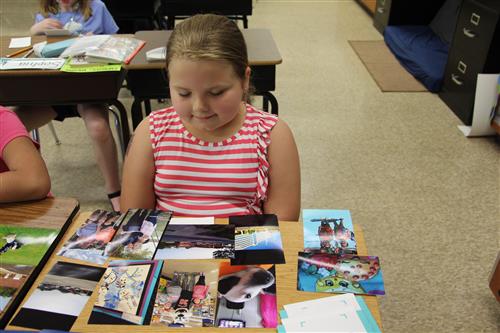 The project has been a lot of fun, he said. “I like trying new things and seeing if it’s fun or not.”

Aleix believes in telling the truth. So she didn’t straighten up things.

Shastelynne Martinez’s pictures include one of her mother and father cutting her mother’s birthday cake. That was a special occasion. Other pictures are more day-to-day.

“I like that we get to take pictures of everything we do every day,” Shastelynne said.

For some students, taking pictures was a relatively new activity. For others, it’s something they were already doing.

Sophia Clark has been taking pictures for a while.

“Pictures are special,” Sophia said. “That’s like a moment of time captured.” 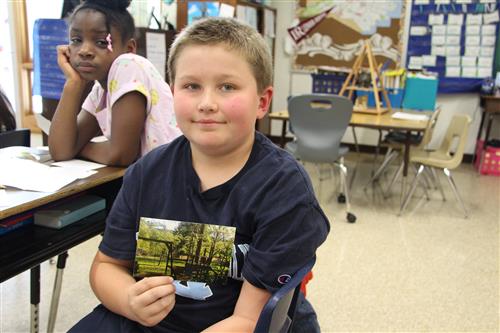 The photo stories project, said Rebecca McKnight, the school system’s Director of Social Studies, is a collaboration of the Social Studies and Academically Gifted departments.

The project was inspired by the Everyday Africa project sponsored by the Pulitzer Center on Crisis Reporting and integrates standards from Social Studies, Writing, and Visual Arts, McKnight said.

“Students have had seven or eight lessons over the course of the year about Winston-Salem/Forsyth County, photography, and writing captions in order to prepare for this exhibit.”