A Desire to Help Others 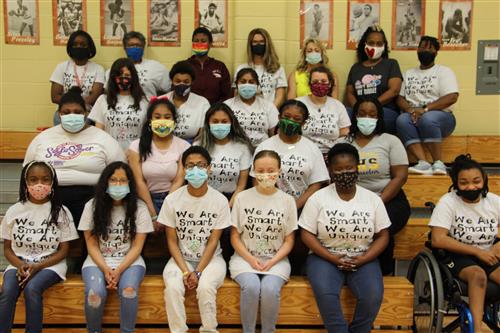 So, instead of lounging about at spring break this year, Smith headed to the Dominican Republic with a medical team from Global Leadership Adventures. While she was there, she worked with doctors and made cement and carried it up a hill while building water tanks. She also saw some immense spiders, ate some fabulous meals, and met some wonderful people.

“These people are nothing but kind,” she said when she shared her experiences with students in several classes at Winston-Salem Preparatory Academy on Tuesday.

She started her day in the media center with the freshmen in Zach Hargett’s math class. 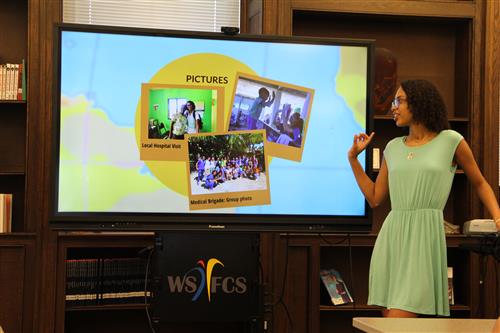 Life gave her the opportunity to show how poised she can be right out of the gate when technological snafus prevented her from projecting the visuals she had created for her presentation. While someone worked on that, she embarked on an informal version of her presentation.

In the United States, she said, we take it for granted that we can use a cell phone or take a hot shower whenever we want. Not so in the Dominican Republic where many are quite poor.

“It’s important for you to understand how lucky you are,” Smith said.

She made the point to the students several times during her presentation that it’s also important for them to understand that they, too, can go adventures throughout the world that will nourish them in one way or another. It doesn’t have to be a trip that focuses on helping people in need. It could focus on sports, teaching, learning another language or building a home for someone.

“You can go anywhere in the world and accomplish your dreams,” Smith said. 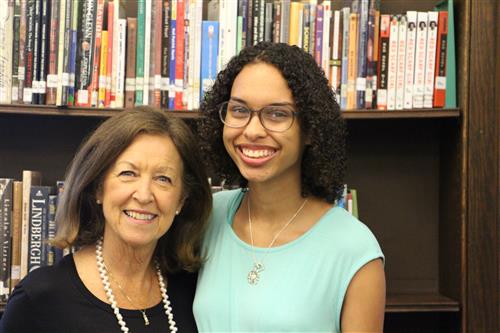 For her, going to the Dominican Republic was an amazing experience.

“My whole view of the world changed,” she said. “The experience was truly life-changing.”

For one, she no longer takes for granted all that she has.

She also learned that she is willing to take risks.

After the technology issues were resolved, Smith was able to show students more of the particulars about the program and some of the pictures taken while she was there.

When she invited students to ask questions, one asked about the cost. The adventure cost about $3,000 plus the price of the airline ticket. Teachers and others in the community helped her pay for the trip, she said, and fellow students could look for such support as well.

Another student asked whether they have McDonald’s. Not where she was. You could pick up a bag of Doritos in a store.

In answer to question about spiders, Smith made a circle with her fingers about the size of a softball. 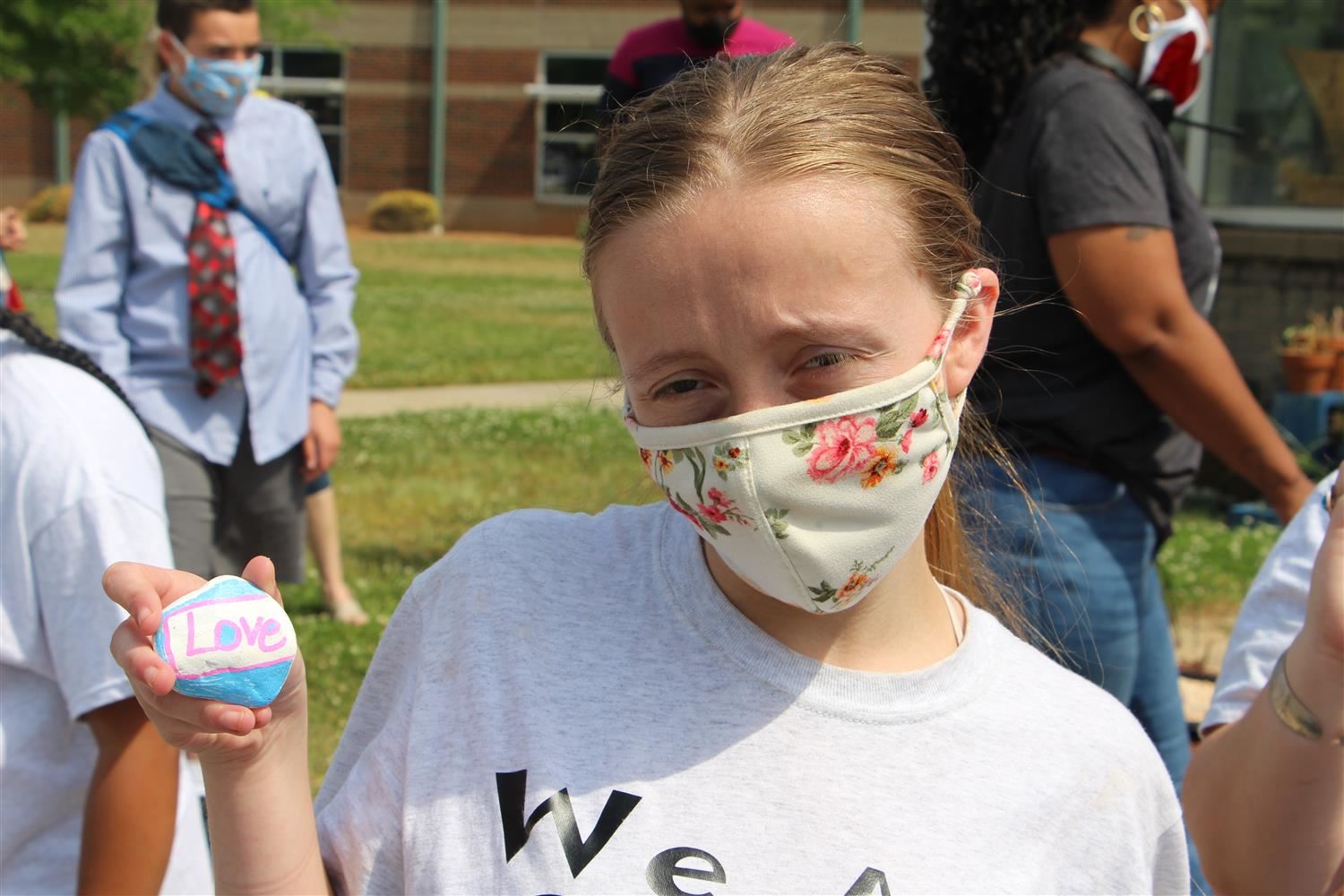 “The spiders were this big,” she said.

A fringe benefit of that experience was discovering after she came home that a daddy long-legs spider no longer fazes her.

Set up in the media center were a number of items from the Dominican Republic, such as a baseball cap, a flag, and several music instruments, there thanks to Spanish teacher Karen Wells, who had borrowed them from her sister.

After the presentation, some students checked those out while other spoke a bit more with Smith.

“I enjoyed it,” said Jania Mackey.

Nakaiyah Cruz said she liked the idea of serving as a volunteer somewhere.

So did Jayla Williams. Not in the Dominican Republic, though. 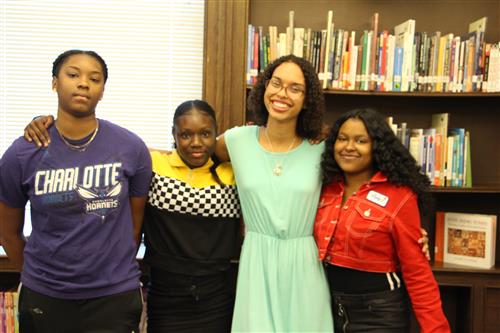 Before the presentation, Deborah Gravlee had been asked what she thought made Smith special. While Smith was speaking to the students, Gravlee answered the question by creating an acrostic based on Smith’s first name:

Respected by teachers and peers

Studies all the time

Education & experiences are important to her

“Poised” was inspired by how Smith dealt with technological issues.

“She was not rattled when things didn’t go her way,” Gravlee said.

Gravlee added a couple of other observations about Smith that had not appeared on the acrostic.

“She smiles all the time. She goes beyond. She gives that extra-mile effort.” 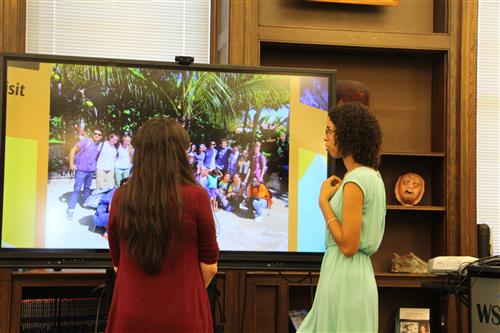 Gravlee helped Smith raise money for the trip, in part, by reaching out to people she knows. Others that helped included the people in the school’s Wellness Center - Becky Paige, the office manager; Sarah Blankenship, the nurse practitioner; Lauren Grandy, the therapist.

“Porsche did all the research required to make her dream of going to the Dominican Republic come true and networked for the necessary resources for the trip.” Grandy said.

“Even though Porsche had assistance from others, it was ultimately her drive and desire to serve others that allowed the trip to be possible. When faced with obstacles, Porsche never gave up and was dedicated to reaching her goal. She greets everyone with a smile, is at the top of her high school class, volunteers in her community, is always willing to help others.”

“Most students and teachers plan to spend their Spring Break on vacation, spending time with friends/family, relaxing, etc., but Porsche desired to spend her break learning and helping others. Porsche is so deserving of all the opportunities that have and will come her way.”

Smith would like to participate in other adventures that serve others in the coming years, and, one day, she would like to go to Japan.

“I love their culture,” she said.

For her career, Smith plans to become a neuropsychologist. Her older sister, Jada, who now attends Carter High, has to deal with the challenges of autism.

“Ever since I was six, I wanted to help my sister. But I didn’t know how,” Smith said.

As she did research over time, she came to see that becoming a neuropsychologist could be a way to help people with such challenges.

A health challenge in her own life also had a profound influence on her life. When she was nine, she learned she had cataracts in both eyes. The vision problems that preceded that knowledge made it difficult to learn to read. She still deals with some vision issues.

Out of all that grew a drive to succeed and to always do more.

“I don’t believe in doing nothing,” she said. “I work all the time. That’s what I have always done.”

As a member of the Winston-Salem Youth Advisory Council, she works with the mayor and members of the city council. She volunteers at schools and does community service through Crosby Scholars. She works to combat hunger through the Think Orange campaign. She has volunteered at the Joy Prom, a prom for students with special needs.

In school, she is at the top of her class.

“I strive for nothing but straight A’s.”