A Violin Jamboree at Easton

Easton Elementary and P.L.A.Y. Music invite you to a Violin Jamboree featuring kindergarten students at 5:30 p.m. on Tuesday May 14 in the school gym.

For more pictures from a class of students preparing for the Jamboree, go to Your Permanent Record. 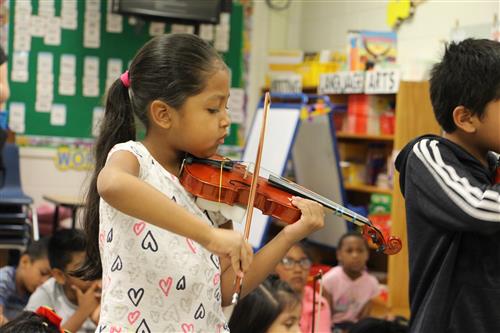 MAY 9, 2019 – Ask any kindergarten student at Easton Elementary whether he or she can play the violin, and every single one can say, “Yes, I can.”

Some might even be inspired to say, “I also know how to make a violin.”

Who knows? One day, a violin made by Jai might be as sought out as one made by Stradivarius.

Now, ask the student whether he or she can play Beethoven’s “Violin Sonata No. 9,” and the response may be “Not right now. Maybe by the time I finish elementary school.”

Thanks to the Winston-Salem Symphony’s P.L.A.Y. Music (Piedmont Learning Academy for Youth Music) program, the kindergarten students at Easton will continue honing their skills as a violinists in the coming years.

On the night of Tuesday May 14, the community is invited to see what students have learned so far at the Violin Jamboree being held in the school’s gym. 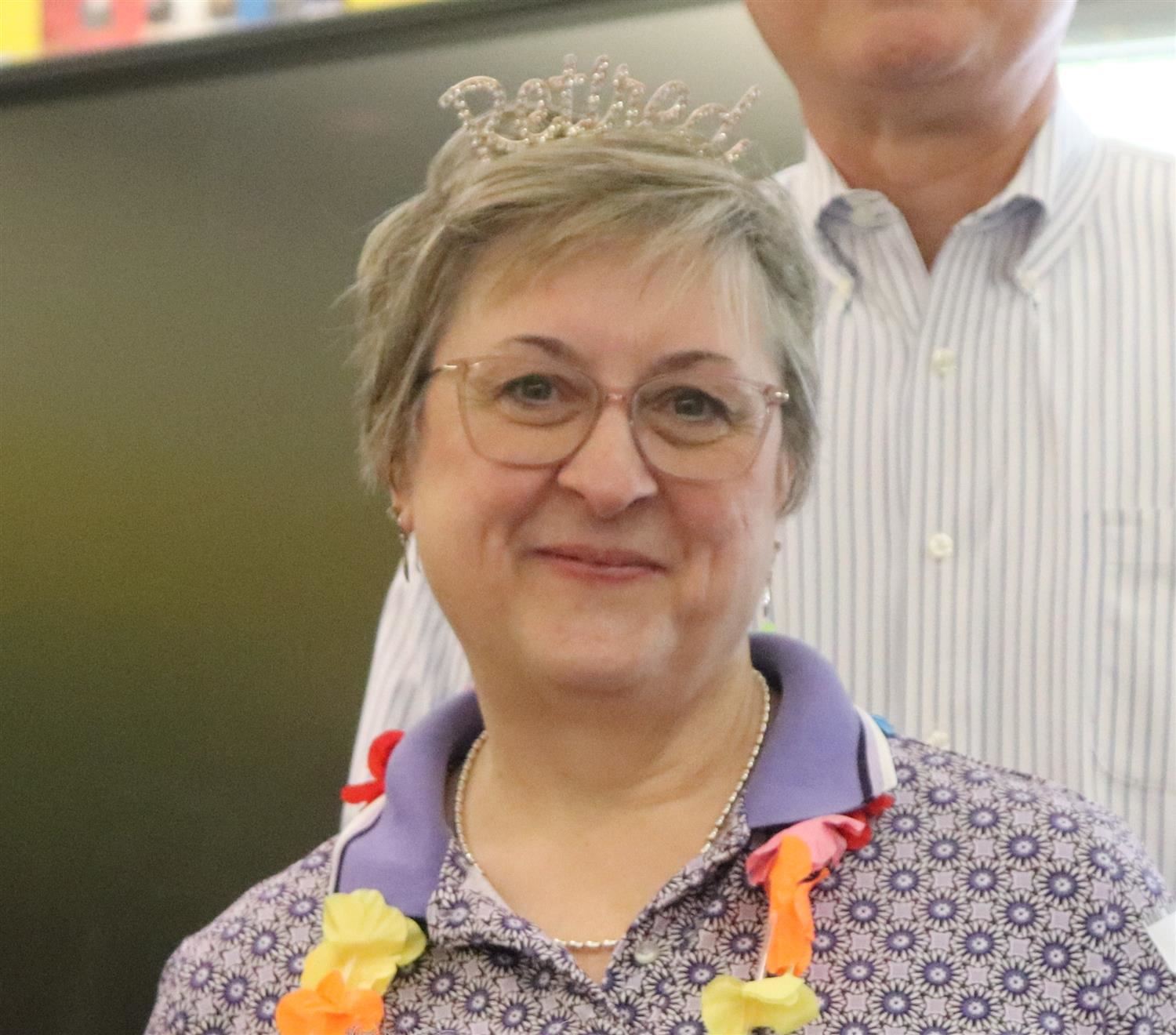 Easton is the latest school to be added to the P.L.A.Y. Music program. Students at Jefferson, Old Town and Diggs-Latham elementary schools were already participating in the program.

All 90 kindergarten students at Easton are studying violin during their “music special” time. On the afternoon of May 7, P.L.A.Y. Music teachers Rachel Watson and Ryane Dunnagan joined Easton music teacher Brandon Kinnard in Iris Amaro’s kindergarten class for their regular session.

Amaro likes that her students are learning to play the violin. Not every child learns in the same way, she said, and playing the violin enables students to explore other ways of learning.

Before learning to play on real violins, students had made violins out of paper. That had helped them get to know violins while being able to start out on an instrument that could handle being dropped a time or two along the way. 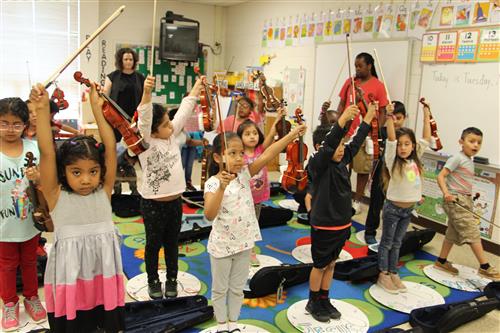 When it was time to give the students real violins, Watson and Dunnagan chose a small violin for each student in one of five sizes depending on the size of the musician who would be using it.

“The instrument has to fit the kid,” Dunnagan said.

Those violins are stored with cases with each student’s name on them, and the teachers started the session by seeing that each child had the right violin.

Each student also had a circle of cardboard with the student’s name and an outline of the student’s feet, which would help them stand in the proper position when it was time to play.

The students started out sitting down. After unzipping their cases, they attached a sponge on the underside of the violin that serves to cushion it when they are playing. Then they tightened their bows and added resin.

As they got ready, Watson used a lot of fun terms such as “marshmallow knees,” which is what you have when you wiggle your knees to loosen them up, and “Pepper bunny,” a way to hold your fingers named after a rabbit she once had. 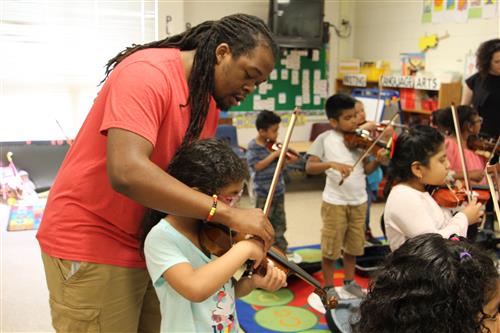 Once it was time to play, Watson used a series of poems that included lines such as “open the gate in the morning” that helped the children remember which way they should be pulling the bow.

While they were playing, Kinnard, Dunnagan and Watson would go here and there checking with each student and offering assistance as needed.

After the class, Kinnard said that he likes that students are able to take violin in part because it challenges them both mentally and physically while giving them an experience that they could not have until they are older if not for the program.

This is the first year for the program at Easton. The plan is to add a grade each year so that these students will have been playing for six years by the time they finish fifth grade and that new students will be introduced to violin each year as kindergarteners.

At Easton, a donor who has chosen to remain anonymous bought the violins that the students are using. 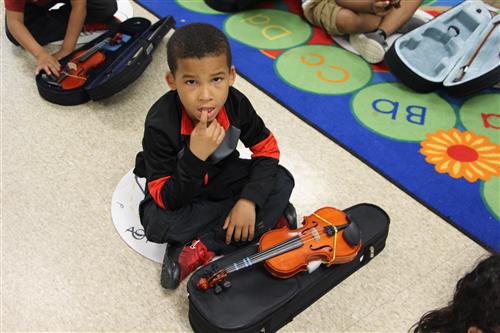 At the jamboree, students from each class will be demonstrating a different aspect of the program. Some of the students will be using the paper violins they made.

At the other Winston-Salem/Forsyth County Schools that have the program, it is an after-school program.

Here’s some more information about the program that Watson provided:

“The Winston-Salem Symphony’s P.L.A.Y. Music places an emphasis on teaching the whole child: head, heart, and hands. The central focus of our program is to teach every child to appreciate their background and where they are from, to gain an appreciation for those different than themselves, become motivated to work together as a team, and to better themselves holistically through contributing and participating in an ensemble. The program also strives to help students excel, not only in music, but in their academics as well, particularly in the area of literacy.”

“Four years ago, we served two locations with approximately 20 kids in an after-school program: Old Town Elementary School and The Salvation Army off of South Broad Street. Today, we serve more than 200 students and work closely with Winston-Salem/Forsyth County Schools, as we have now expanded the program into four schools: Jefferson Elementary, Diggs-Latham Elementary, Old Town Elementary, and Easton Elementary.” 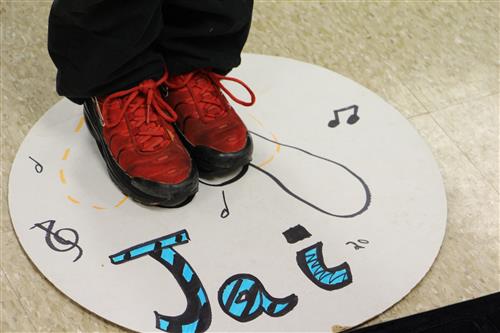 “The program is completely free at Diggs-Latham, Old Town, and Easton, which are all Title I schools. Jefferson Elementary families pay tuition for the program – $200 per quarter. Their fees go towards paying for teacher instruction, materials used to make the paper violins and bows, the real violins, bows, and cases, handouts/worksheets, and concerts/performances. A portion of their tuition also goes towards helping provide a violin for a student in need. The programs held at the Title I schools are mostly funded through generous donors.”