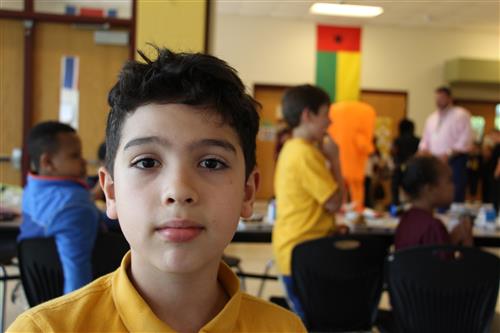 MAY 10, 2019 – Until recently, the cafeteria at Speas Global Elementary served students their lunches on trays made out of polystyrene foam, which people often refer to as Styrofoam.

As a way to support the environment, a team of adults at Speas worked together to help the school begin serving meals on trays made out of paper and having the trays and leftover food sent to a farm in Davie County where it is composted and can be used as fertilizer.

Speas students are all for the changes.

Second-grader Jackson Vick is glad they have started using trays made out of paper.

“We are causing less pollution,” Jackson said. “It’s paper. So it can compost. That is what I am happy about.”

To help the environment even more, he said, some students have started bringing metal silverware from home so they won’t be throwing away plastic utensils. 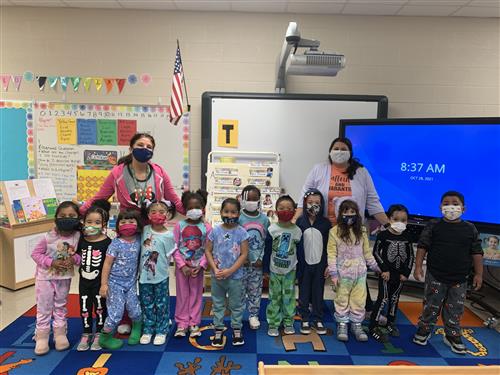 “There is going to be a lot less trash in the world,” Nazarie said.

A bonus for him is that the paper trays don’t break, something that the polystyrene foam trays sometimes did. When that happened, he said, such food such as peaches and peach juice might spill.

“I really like them,” said Georgia, whose father, Paul Pressly, is the assistant principal.

Georgia has always been interested in nature so she is glad to do whatever she can to help preserve the natural world.

“To know we are helping little by little is amazing,” she said.

On Thursday May 9, people with the school and the Child Nutrition department celebrated the pilot program at Speas. Dan Levstek, who is a supervisor in Child Nutrition, donned his Mr. Carrot costume and visited with students in the cafeteria while members of the media talked with some of the people who made it all happen. People from other schools also came to learn more. 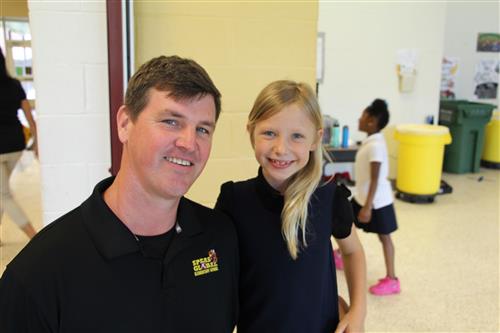 The changes at Speas grew out of changes at Jefferson Elementary, where the school has switched to trays that can be washed and reused.

When Speas parent Jessica McCrory, whose son Conor is in kindergarten at Speas, heard about that through friends who have children at Jefferson, she thought it would be great to take a similar approach at Speas.

When she approached Principal Robert Ash, he connected her Bianca Basurto, a second-grade teacher in the school’s dual immersion program, and others at the school already focusing on environmental issues. McCrory also connected with Jamie Gordon Maier, the Executive Director of Piedmont Environmental Alliance, and with school board members Deanna Kaplan and Leah Crowley, who are strong supporters of such programs.

Maier, Kaplan, and Crowley had worked with the people at Jefferson and were among those at Speas on Thursday.

McCrory learned that, at Speas, converting to reusable trays would have required hiring someone new in the cafeteria to wash them. So the decision was made to use paper trays that could be composted.

That led to Lyndsy Gallins. She and her husband, Peter, own Gallins Family Farm, which is on Farmington Road in Davie County near the new high school. They accept food waste and other materials that can be composted and turn it into “Carolina Dynamite” compost that people can use on their gardens and such.

Gallins said they are delighted to be working with Speas. 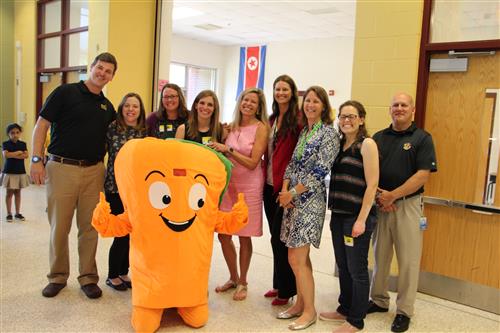 “It’s phenomenal,” Gallins said. “We love it. Getting kids composting at a young age is crucial for the future…It’s really exciting to see kids learn this process.”

In the eight years since Peter and Lyndsy Gallins established their composting business, it has grown to accept compostables from grocery stores, universities, corporate cafeterias, and private schools within a 100-mile radius of the farm. These days, three dump trucks a day bring material to the farm five days a week.

Kaplan and Crowley both talked about what an excellent step they think this is.

“This is so, so valuable,” Kaplan said. “This is an exciting effort with the moms and the kids and the community to make the world a better place.”

“We are saving the world one compostable tray at a time.”

The process also serves as an excellent teaching tool, Crowley said. It’s exciting to see the students light up as they make the connections – unused food and the paper trays turn into compost that can nourish plants that can become new food.

As to whether to use trays that can be washed or trays that can be composted, said Jamie Gordon Maier, the Executive Director of Piedmont Environmental Alliance, “It’s going to depend on the school which solution makes the most sense.” 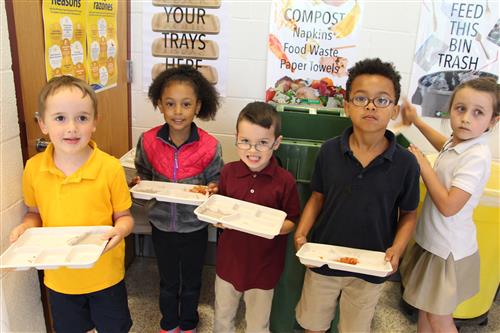 At other schools in the system, parents and others are also looking at making changes that will help the environment. Those schools include the Career Center, The Downtown School, Sherwood Forest Elementary, and Hanes Magnet Middle.

Parent Gwen Catherine Parker is connected to both Sherwood Forest and Hanes. Her son Leo Mazo is a second-grader at Sherwood Forest Elementary, and her son Max Mezo is in the sixth grade at Hanes.

Since hearing about what is going on at Jefferson and Speas, she has been talking with people at those schools about working together on such a program at her children’s schools.

“I heard about it, and I thought, ‘What a great program,’” she said. “It should be implemented through the district.”

She thinks it’s important because, in addition to reducing pollution, it educates students by engaging them in the process of helping to heal their world.

She came to the celebration at Speas, she said, “to see how it’s working on a very practical level.” 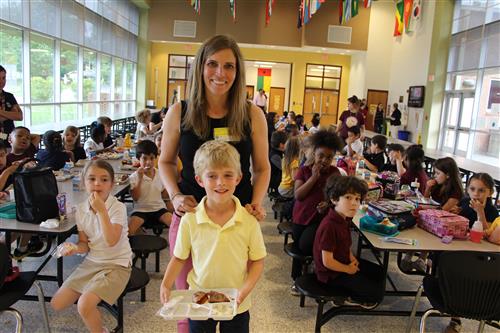 The changes at Jefferson were a collaboration among parents Christy Robinson and Danielle Jaworski and teacher Amy Talley. Talley, who works with the school’s recycling team, is the school system’s Teacher of the Year. Robinson has two children at Jefferson – Amy, who is in the first grade, and Will, who is in kindergarten. Robinson is one of the co-founders of Women of Action, a local group that helps its member connect to other groups in the community.

Robinson and Jaworski were both at the celebration. So was Kenneth Simington, the interim superintendent who had his picture made with Mr. Carrot, students and Ash.

Jefferson made the transition to washable trays at the end of the 2017-18 school year. Now, people there are looking at the possibility of using compostable trays.

To learn more about Gallins Family Farm, go to Farm.

To learn more about Piedmont Environmental Alliance, go to Alliance.