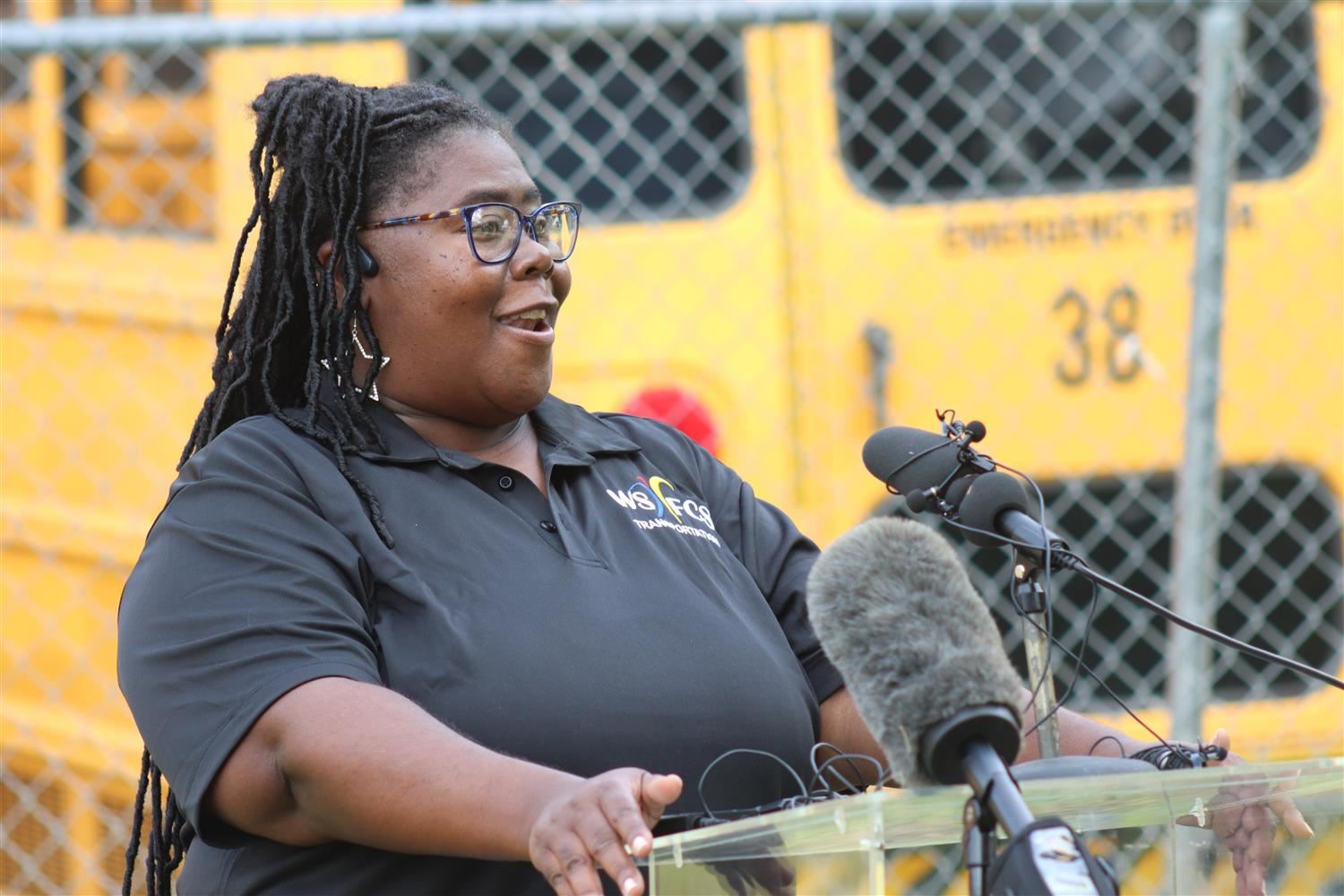 JUNE 5, 2019 – Fourth-graders at Speas like the way Abi Woodson teaches.

“She has fun with us while she is teaching,” said Ravone Alexander. “She taught us everything we need to know for the fifth grade.”

“She helps us a lot,” said Aamilya Watson. “If you need it, she will always be there for you.”

The attention that Woodson gives each student and the work she does to help all of her students reach their full potential led to Woodson being named Teacher of the Year for the Winston-Salem/Forsyth County school system. The announcement was made at the Core Awards on May 23.

Woodson said that she is both honored and grateful to receive the award. At the same time, she said, she knows she is just one of countless teachers doing their best to serve their students.

“I am one face of many,” Woodson said. 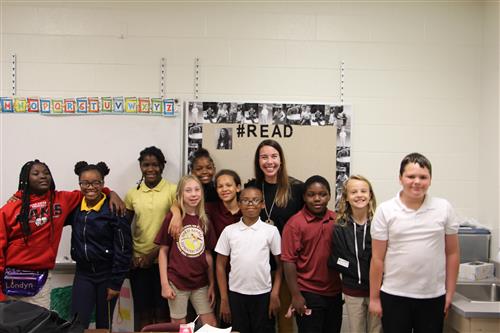 Teaching is work that she truly loves.

“I am very happy in the classroom,” she said. “Every day is a new day. Every day is unexpected.”

She likes having flexibility in how she teaches, and she likes watching students learn.

“I am constantly learning with them,” Woodson said.

At Speas Global Elementary, Woodson is known for her upbeat energy and for taking a positive approach to every day.

“She is extremely energetic,” said Stephanie Miller, a fifth-grade teacher whose classroom is just down the hall from Woodson’s.

“Her enthusiasm is contagious.”

“She is sweet and kind,” Miller said. “She always has a positive remark to make about any situation.”

Along the way she has picked up such nicknames as Mrs. Fun and Wacky Woodson.

Woodson teaches three groups of students each day. In her classes, the focus is on reading and on social studies, and she works hard to help her students make connections.  Speas is an International Baccalaureate school, and each grade is identified with a particular continent. For fourth-graders, that’s South America. 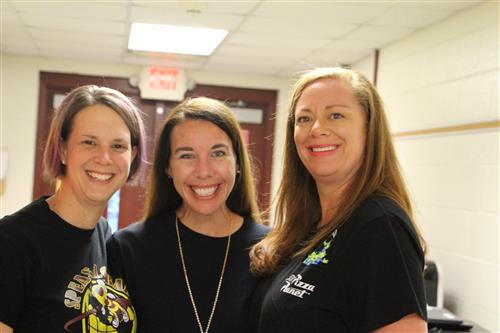 So reading passages about the Amazon rain forest may lead to a project in which students come up with ways to save the rain forest.

“The kids do get very into it,” she said.

With their curiosity, one question leads to another.

Once, while students were learning about Valley Forge, she invited two people who participate in historic reenactments to come to her class. One came as a British soldier and the other as an American patriot.

“She is a one-of-a-kind teacher, “McGarry-Pike said. “Her enthusiasm for quality education is contagious, not to mention her bright smile greeting you each morning.

“Her students love her. They know she genuinely cares for them and she celebrates each of their successes whether it is big or small. I am honored to work with her and call her my teammate.”

Woodson is also active outside the classroom at Speas. Woodson helps with the Run Club, an after-school club sponsored by the PTA that Telesia Garcia, the school’s data manager, coaches.

“Everybody loves her,” Garcia said. “One of her strongest gifts is she is so adaptable. She gets along with everybody. She is such a people person.”

“She is always so enthusiastic.”

Woodson is from Charlotte. Growing up, she always enjoyed being around young people.

“I would work at camp, and I would babysit,” she said. ‘‘I had a real love of children.”

And, with a brother who is six years younger, she had a good pupil for her pretend classroom.

After doing her student teaching with first-graders, she began her teaching career in Charlotte as a third-grade teacher. She enjoyed interacting with students that age.

They’re developing their communication skills and becoming more independent. Another thing she likes about third-graders is they will tell you exactly what they are thinking.

“They are brutally honest,” she said. “I think that is so refreshing.”

Her husband, David Woodson, is a district manager with Public Storage, a national self-storage company. When his work brought the Woodsons here in 2012, she began teaching fourth grade at Speas.

While she was teaching in Charlotte, Woodson had the good fortune to work with her mother, Linda Hege, a teacher assistant who is now retired, for seven years.

Woodson’s brother, Abe Hege, grew up to become an educator as well. After starting out in another career, he became a lateral-entry teacher. He is now the principal of Fairview Elementary in Guilford County. 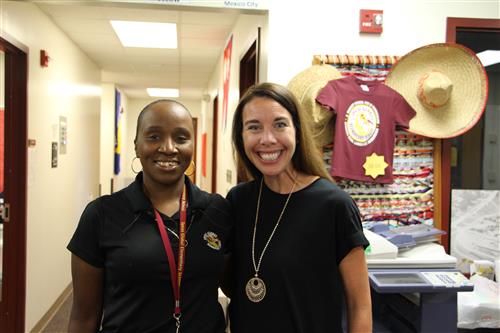 David Woodson grew up in from Alta Vista, Va. where his mother, Joan Woodson, was an elementary school principal before retiring.

The Woodsons have two children. Ike is 2. Tripp is 5 and will be in kindergarten next year. Woodson wanted him to have his own school – one where his mother is not a teacher. So he will go to Meadowlark Elementary.

The family is quite active. David Woodson’s family has a place at Smith Mountain Lake in Virginia, and they like to go up there and head out onto the lake.

“We are teaching my oldest son how to water ski,” Woodson said.

In Charlotte, Woodson coached the Girls on the Run Club at Elon Park Elementary. She runs on her own, usually about three miles a day. Since starting a family she doesn’t participate in races as much as she once did. In April, though, she completed a half-marathon.

Woodson does her best to see that she has a bit of downtime. And what might she read during that downtime? She laughed and said, “People magazine.”

She also enjoys re-reading classics. That could be Catcher in the Rye or one of the Ramona books by Beverly Cleary. 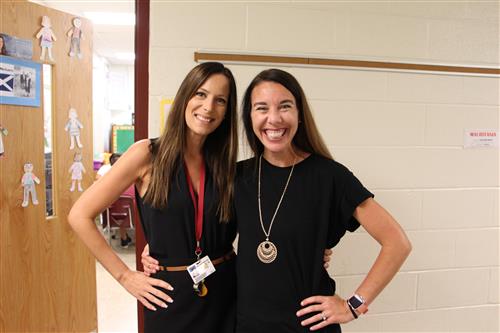 Woodson readily smiles when she talks, and, when anyone talks about her, chances are excellent that some version of the words “enthusiastic” or “positive” will come up.

She cares for the students and keeps them engaged, Ash said. “Students enjoy being in her class.”

Katryna Jacober, the school’s International Baccalaureate coordinator, said, “She is very happy and positive all the time…She is on fire every day.”

“I am so excited she won. She is so deserving.”