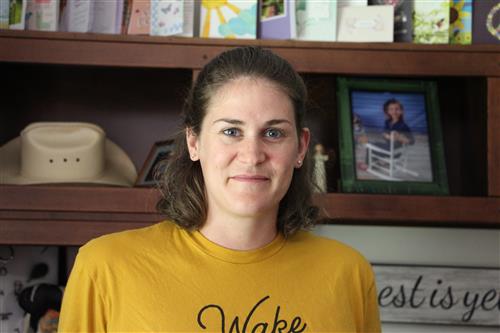 JUNE 27, 2019 –After Corinne Groves learned that she had brain tumor, love and support came to her from many directions.

Her students and colleagues at Meadowlark Middle sent cards and put together “Care Boxes” filled with candy, books and other treats for her stay in the hospital after the surgery.

Groves leads trail rides for Tanglewood Stables in Tanglewood Park, and her friends and colleagues there let her know how much they cared.

People who didn’t even know her or her family prayed for her. Groves mother – Connie Groves – tells the story of the day she was in the hospital room with her daughter when a woman from Social Security called her back about her Social Security application.

Connie Groves told her where she was and that she needed a moment to step out into the hall. By the end of the call, the woman from Social Security had learned enough about what was going on to say that she, too, would pray.

All of that love and support has been a profoundly positive experience, she said.

Although she has asked the question, “Why me?” – for the most part, she is grateful that God has been by her side through all of this.

Her mother has seen depths to her daughter that she did not know were there.

“We have always known our daughter was strong,” Connie Groves.

But she got a glimpse into just how deep her daughter’s strength is, Connie Groves said, as she dealt with the challenges that have faced her in recent weeks.

Groves, 32, has two children. Blake, who is 5, will attend Meadowlark Elementary this coming school year. Davis will turn 3 in August.

Since Groves came home from the hospital, she has been playing with her children. That has helped her with the healing process.

“Being a mom is the best therapy ever,” Groves said.

The healing comes not only from spending time with her children but also from dealing with the mechanics of shooting basketball and playing hopscotch. Going horseback riding at Tanglewood has also helped improve her balance.

Groves was diagnosed with Acoustic Neuroma or vestibular schwannoma.

“The tumor was attached to my vestibular nerve (balance center in the brain), auditory nerve and facial nerve,” Groves said.

It was while she was pregnant with Davis that she experienced the first symptoms that she now knows were connected to the brain tumor.

“I started to notice I had some hearing loss,” she said.

She was unusually tired, and, on a trip to Boone in 2016, she found herself in a room that seemed to be spinning.

Today, those symptoms can all be explained by a growing tumor that was applying pressure to nerves. At the time, though, it was easy enough to attribute such symptoms as fatigue to her pregnancy, and her mother would joke about the hearing loss being a consequence of sitting too close to the speakers at too many concerts.

The symptoms became more pronounced over time, though, and, when she had the flu in February of this year, the extent of the hearing loss sent her to audiologist who suggested an MRI (magnetic resonance imaging) scan that could provide detailed pictures of her brain to rule out a brain tumor.

That didn’t seem necessary, Groves thought at first, especially when she learned that her co-pay would be $1,200. She didn’t feel as if she had that kind of money. They told her that she could make three payments of $400. She was still wondering about whether she should have an MRI when she received a $400 check as a reimbursement from an escrow account.

Something about it being close to the exact amount made her think, “This is a sign from God.”

So she scheduled the appointment. Although her mother was still thinking, “This is going to be a waste of money,” there was no question about supporting her daughter. She drove up from Greer, S.C., to keep her daughter company at the test on March 31.

When they returned on April 2 to look at the image from the MRI, they couldn’t believe what they were seeing – a tumor 2.5 centimeters in diameter. Although that’s not as a big as a golf ball, that’s what it looked like to Groves.

Seeking a second opinion and a surgeon with extensive experience with Acoustic Neuroma took her to the Duke University Hospital.

The surgery was scheduled for May 20. Although she was officially on leave from work by then, she went to school one day to connect with students and her colleagues. Students hugged her. Colleagues let her know how much she meant to them.

Another way everyone supported Groves has been by buying T-shirts and wrist bands designed by Jaime Willeford, who also teaches at Meadowlark Middle. The money raised is helping with her medical expenses.

Recovery time after the surgery is 8 to 12 weeks.

As it happens, Week 13 is when teachers are scheduled to return to work, and Groves plans to be there.

It’s possible that the tumor could come back one day so, for the next 10 years, Groves is scheduled to get an MRI each year.

Groves was born in South Carolina. The first place she remembers living is Black Mountain, the town about 16 miles this side of Asheville.

She is the third of four children in her family, and, growing up, she played teacher to her younger brother.

“I liked to come home from school and teach him everything I had learned,” Groves said.

She certainly did well in school. She was always on the A Honor Roll.

She heard many stories about teaching from her grandmother Marion Coster, who taught first grade for 30 years.

Groves enjoyed being around and taking care of children.

“She always enjoyed children,” Connie Groves said. “She would babysit for all of the kids in the neighborhood.”

But teaching as a career was not something she gave much thought to.

Sports had her attention.

“She was a great athlete,” Connie Groves said. “That is where she seemed to shine.”

She played volleyball. She ran track. She played basketball.

When colleges started recruiting her, though, it became clear that playing basketball was the path to take. She received one call about playing volleyball. She received 72 recruitment calls from colleges wanting her to play basketball, and she filled a box with all the letters they sent.

She got offers from as far away as California. She quickly decided, though, that she wanted to play for a college in the Atlantic Coast Conference because her parents – her father’s name is Gene – had come to her games throughout high school, and she wanted them to be able to come to her college games as well.

She really liked Wake Forest University when she visited, so she ended up going there.

“I had a basketball scholarship so that was my job in college,” she said.

During her sophomore year, she decided she wanted to become an elementary school teacher. As a student teacher, she taught second grade. When she was hired at Meadowlark Elementary after graduating, she taught first grade and then third grade.

After teaching for three years, she accepted a job offer to play basketball in France. She gave up her job and her home. When she arrived in Le Havre, she found that all was not as it had been presented. When someone told her that they hoped to be able to pay her at some point, she realized it was time to head back home.

When she came back in August, she learned that all the teaching jobs at Meadowlark Elementary had been filled.

She was already connected to Meadowlark Middle, which shares a campus with the elementary school.

“I had already been coaching at the middle school,” she said.

When Chris Holloway, the physical education teacher and athletic director at the middle school, found out that she was back he said he would check with the principal about possible job openings. Yes, they did have an opening for a sixth-grade teacher.

Groves pulled some clothes out of the box where she was keeping them and headed to the interview.

She was hired and there she was – a middle school teacher, something she had not envisioned becoming. As she taught in middle school, she discovered she enjoyed working with students that age.

And she liked being a mentor as she helped them work through the challenges that adolescence can bring.

After teaching math, social studies and science to sixth-graders for six years, she began teaching seventh-grade math this past school year.

She is both excited and nervous about returning to the classroom.

In the early days after the surgery, signs of the surgery were still readily visible. The pressure on the facial nerve had distorted her expression. She could not fully close her left eye.

As the days have passed, the visible symptoms have diminished, leaving her with what she thinks of as “an invisible disability.”

Balance is still an issue so she cannot close her eyes in the shower, lest she lose her balance. She does some driving locally but does not get on the interstate because of the swift back and forth movement of her head that might require.

Since she cannot fully close her left eye, it has a tendency to dry out, and reading is difficult.

“I hope that will get better,” she said.

She’s not supposed to lift much weight. So, for now, she’s not picking up her children, hoisting her dog Murphy – a 70-pound Labradoodle into the back of the car – or picking up bales of hay at Tanglewood. 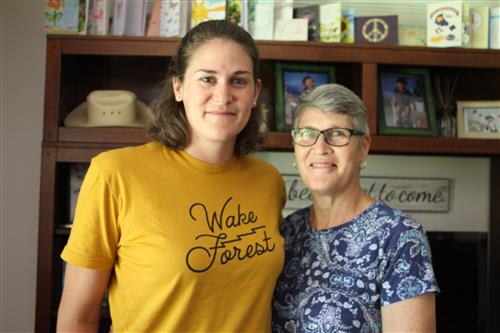 And, because of the complete loss of her hearing in her left ear, she can no longer tell what direction sounds are coming from. She joked that could present challenges in the classroom because, while she is looking at one student, she won’t be able to tell who is responsible for, say, tapping a pencil on a desk in another part of the classroom.

And certain kinds of sounds – such as metal on metal – sound harsh to her. So she is going to have to get used to such sounds as slamming lockers.

Those are all relatively little things, though. The thing that matters is she knows she will be surrounded by people who have shown they care about her.

You can find out more about what people are doing to support Groves at Team Groves.