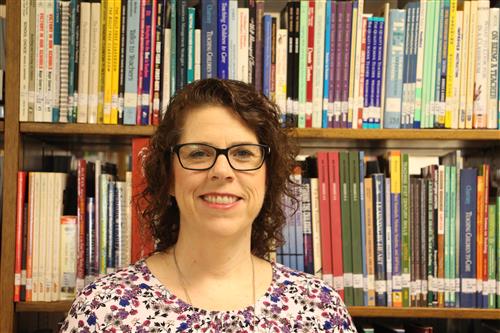 Before coming to the Winston-Salem/Forsyth County school system, she served as the media coordinator at Southwest Guilford High for seven years.

The people there appreciate her as a person and for the passion and skills she brought to her job.

“She believes in all stakeholders having equal opportunities and is passionate about everything she can bring to the table,” said Principal Michael Hettenbach.

“She has a passion for making the Media Center the hub for the school. This includes assisting staff, students in the community in integrating technology, teaching research, writing and finding resources. If you want to know the success of a school, it starts with the Media Center. She has created that and creates that non-stop ‘buzz’ that makes all stakeholders feel welcome and ready to learn.”

Tinisha Shaw is the curriculum facilitator and test coordinator for Southwest Guilford.

“She is an awesome listener,” Shaw said. “She takes the time to hear what you have to say without interjecting herself in it.”

“She has such honesty and integrity.”

And she is always open to learning more, Shaw said.

“I really believe this is her calling because of how passionate she is about her career.”

As much as Meier enjoyed reading and going to the library growing up, she didn’t envision becoming a librarian one day.

“I was going to be a teacher,” Meier said. “My grandmother was a teacher.”

“I loved working with young children. I loved the activities. I thought it would be something I could be successful at and would enjoy.”

After graduating from High Point Central High School, she headed off to Appalachian State University, graduating in 1994 with a bachelor’s degree in Elementary Education.

A group from her church was joining a larger group of Christians heading to Russia’s third-largest city – Nizhny Novgorod.

“Communism was crumbling,” she said. “It was wide open for people to come.”

“It was cold and dark,” Meier said.

“But I loved the Russian people,” she said. “They are very different and much more guarded than we are as Americans. They don’t trust easily, and I don’t blame them.”

“They were fiercely loyal to family, and, boy, would they read.”

They devoured literature, she said.

She returned home with a different perspective on the world and on life.

“I feel like that really taught me how to respect other people’s cultures.”

When she came back to the United States in July, the teaching positions in elementary schools in the area had all been filled.

What she found was a job in Randolph County as a computer teacher.

“It was a good start for me,” she said. “I worked very closely with the media coordinator.”

That introduced her to the world of the media coordinator, which included working with books and technology and spending time with students.

“I loved what they did and how she supported the classroom teachers,” Meier said.

During the next few years, she taught in Randolph County and Guilford County elementary and middle schools. She taught first grade, third grade, sixth-grade math and science, English as a Second Language, and Instructional Technology.

Meier and her husband, Jason, celebrated their 21st anniversary this year. They have three children.

After her youngest was born, she stopped teaching and stayed at home. During that time, she began working on her master’s degree at the University of North Carolina at Greensboro. Working with some of the people at the university and learning more about library science prompted her to change the focus of her master’s to Library and Information Services.

Today, her oldest daughter, Rebecca is studying music education at UNCG. Ashlyn will be a senior in high school, so this summer is going to include family visits to colleges she is considering. Ryan will be a freshman in high school.

Meier returned to working in public schools in 2008 as the media coordinator at Reedy Fork Elementary School.

“That’s where I knew I was supposed to be,” she said. “I felt like I had gotten home.”

She enjoyed all aspects of the job.

“I love children’s books,” she said. “I loved sharing with the children. It was something new every day. I felt I learned so much from the teachers.”

In 2012, she became the media coordinator at Southwest Guilford High School. There, she worked with the students participating in the High School Battle of the Books.

Since 2018, she has also taught an online course in Information Literacy for Ashford University.

Meier listens to a lot of audio books as she drives to and from work and elsewhere. At home, she spends another 30 minutes to an hour reading books, articles related to her work and such.

As the Director of Media Services, Meier will be working with librarians/media coordinators throughout the Winston-Salem/Forsyth County school system.

The opportunity of working with others is what drew her to the job.

“A professional goal of mine was to support at a higher level,” she said.

She wanted to help others grow.

Music is another passion of Meier’s. She learned to play the flute when she was in the sixth grade. For five years, she has played flute and piccolo with the Philharmonia of Greensboro.

Meier also enjoys traveling. She has been to Switzerland. In the United States, she has visited Niagara Falls and traveled throughout the Southeast.

Meier has two older sisters and a younger brother. Her father and mother, Grace Kropf, are from the High Point area.

“They met when they were in third grade,” she said.

When they were juniors in high school, they started dating. After her father retired, the family came back to North Carolina.

Meier was 11, and she was in the midst of sixth grade. After growing up on military bases where all of the students were living the same sort of life, the public school culture felt very different.

One memory she has of the library at school growing up was when the librarian kept a live scorpion in a jar.

Her short-term goal since coming to the school system in June is to learn how everything works in the system and to get to know the media coordinators and assistants.

From there, she is looking forward to strengthening connections throughout the system.

“I believe we are at our strongest when we collaborate,” Meier said.