The Summer Enrichment musical “Newsies: The Broadway Musical” will be performed in Reynolds Auditorium at 7 p.m. July 15-17. Admission is $5.

You will find more pictures at Your Permanent Record. 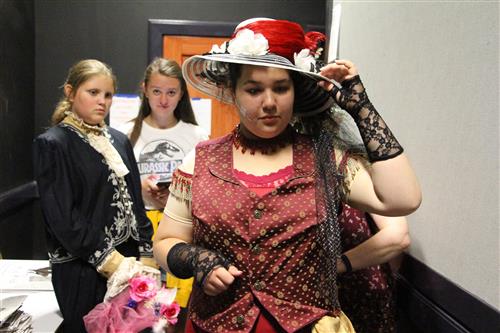 JULY 11, 2019 – In Newsies, this year’s Summer Enrichment musical, Samantha Medrano plays Medda Larkson, a singer who offers her theater as a haven for the striking newsies.

“I love my character and her sassiness,” said Samantha, who will be a freshman at either Reynolds or Reagan this year.

“She is so amazing to play.”

This is fourth summer that Samantha has participated in the Summer Enrichment musical. Each year, she thoroughly enjoys the experience.

“I enjoy acting and singing, and I love meeting new people,” she said.

She likes acting and singing so much she envisions pursuing it as a career.

Samantha is one of nearly 100 Winston-Salem/Forsyth County students participating this year. On the nights of July 15-17, more than 70 students will be performing on stage. Another 15 have been working on sets and will be working backstage during performances. And about 10 students will be playing in the orchestra pit. 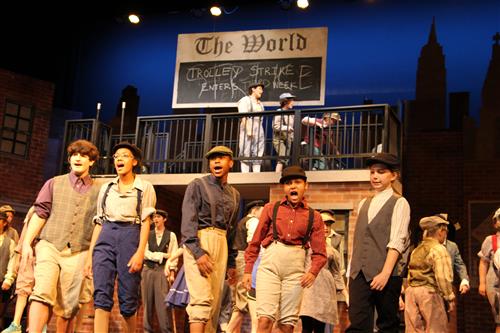 Newsies: The Broadway Musical was inspired by the New York City newsboy strike of 1899. As the Internet Movie Data Base put it: “When Joseph Pulitzer and William Randolph Hearst raise the distribution price one-tenth of a cent per paper - 10 cents per hundred – the newsboys, poor enough already, are outraged.”

After the story was turned into a successful Broadway musical, Disney created the movie Newsies: The Broadway Musical by filming a live theatrical version.

Brad Oliver, the school system’s Director of Arts Education and Summer Enrichment Programs, knows people will enjoy the show. Students have worked hard, he said, and it will be like going to a Broadway show.

“And they don’t have to go to New York for it,” Oliver said.

He laughed and added that, at $5, the admission price is also a lot easier on the wallet than a Broadway show.

Chad Edwards, who teaches drama at Mount Tabor High, is Director. Amanda Nelson, who teaches dance at Diggs-Latham Elementary, is Choreographer. Elizabeth Rief, who teaches at Summit School, is in her seventh year as Stage Manager.

Edwards, Nelson and Rief all talked about how much they enjoy working with the Summer Enrichment musical each year.

“This is my favorite part of the year,” Nelson said. “This is when I get to recharge my creative batteries.” 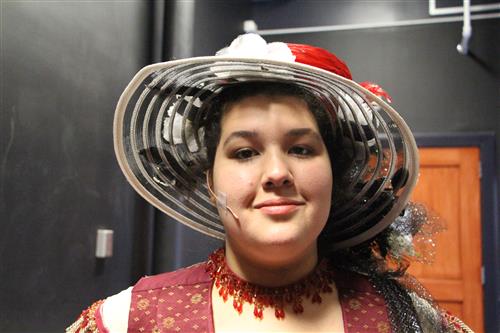 She is particularly excited about the show this year.

“The music in this is so phenomenal,” Nelson said. “A lot of these songs give me goosebumps.”

Working with the summer musical is treat for Rief as well. After teaching Latin during the regular school year, working on the musical provides a mental vacation.

“I love theater, and I love working with kids,” she said.

Edwards has worked on the summer musical for a number of years. After serving as Production Manager last year, he has taken on the responsibilities of Director for the first time this summer.

It’s challenging, he said, but it’s been a great experience.

“I have a great team around me,” Edwards said. “That is what has been really great.”

“The people I am working with are really good with kids.” 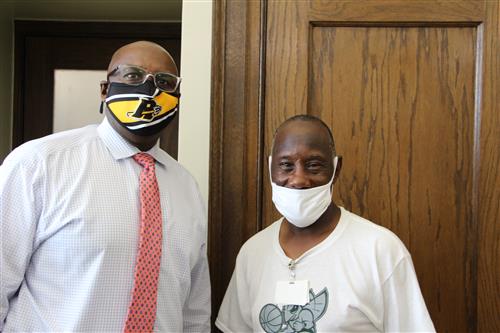 Nick Zayas who teaches drama at Reynolds, is the Production Manager, and Michael Martinez, who taught at Reynolds, is Music Director. Terry Hicks is the pianist. Bland Wade, the director of the stage properties program at the University of North Carolina School of the Arts, designed the set.

This is the 10th summer that sister and brother, Avery and Spencer Browning, have participated in the Summer Enrichment musical. Spencer, who plays Joseph Pulitzer, likes the sense of family that has developed over the years. And he enjoys acting.

“Acting is one of my favorite hobbies,” said Spencer, who will be a sophomore at West Forsyth High.

Even after 10 years, he still feels a bit nervous going on stage.

“You just have to figure out how to overcome,” Spencer said. 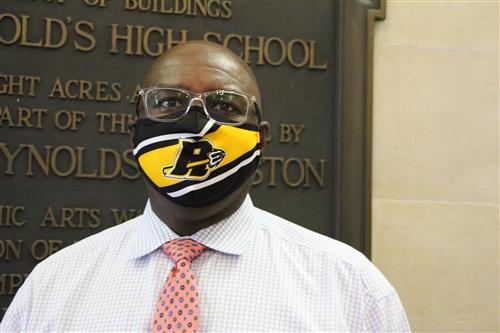 For him, that means taking a couple of deep breaths before he steps out.

Newsies is one of the best musicals he has participated in, he said. “This is definitely one at the top – up there with Beauty and the Beast.”

Avery, who will be a senior at West Forsyth, has several roles this summer. In addition to serving as Pulitzer’s secretary and as a newsie, she plays a nun and a “Bowery beauty.”

Avery loves working with everyone during the summer musical and is planning on majoring in early childhood education with a minor in musical theater once she heads to college.

This is Page Hamby’s first year participating in the summer musical. She decided to give it a go after her brother, Caleb, told her how much fun he had participating, and she’s glad she did.

“It’s fun getting in character, and I have never been in a musical before,” said Page, who will be a freshman at Reynolds.

As Teddy Roosevelt, Ian Chapman, who will be a freshman at Mount Tabor High, has to stand up to Pulitzer.

“You have to be very commanding as Teddy Roosevelt,” he said.

This is his second summer musical. 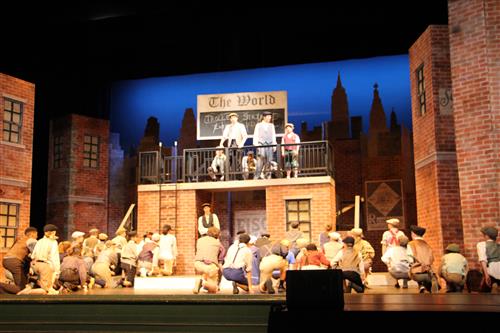 “I loved hanging out with the people,” he said. “Everybody last year was really nice.”

Ian plans on becoming a veterinarian one day. Dogs are his favorite animal, and he has two of his own. He appreciates what having dogs in your life can do for you.

“If I am in a bad mood, my dogs will cheer me up every time,” Ian said.

Charlotte Smith, who will be in the sixth grade at Jefferson Middle, has such roles as a passer-by in several scenes.

Although this is only her second summer participating in the Summer Musical, she has been acting far longer.

And what was her first role?

“I was a doll and just sat there.” 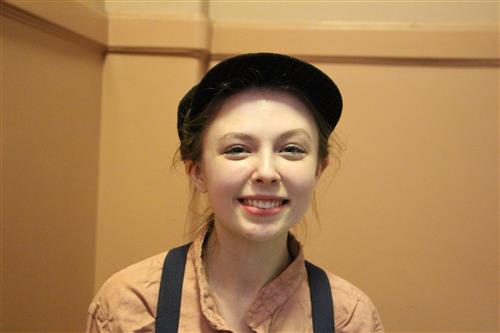 Her list of possible careers including acting, becoming a physical therapist and becoming a teacher. If she becomes a teacher, she would want to teach science and social studies to fifth-graders.

Sarah Sawyer, who will be a senior at West Forsyth High, has been acting for years as well.

“Theater is kind of my passion,” Sarah said.

“I wanted a new experience,” she said.

Plus, it was Newsies.

“Newsies is my favorite musical,” she said. “It’s a high-energy show with really cool harmonies, and it’s a lot of fun.”

If Sarah doesn’t pursue a career in the performing arts, she may become a graphic designer. 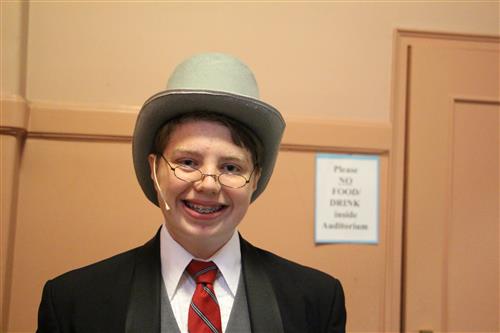 Virginia Starling, who will be a senior at Reagan High, plays the owner of a delicatessen. This is her fourth Summer Enrichment musical.

“I love making new friends and being able to see them every day,” Virginia said.

Destiny Thompson and Meredith Rodda both go to Paisley IB Magnet School. Both of have participated before and both like making new friends.

Destiny wants to go into computer science. Meredith is not sure of the particular career she wants to pursue. She does know that she wants to be of service to others.

“I want to do something that benefits the world,” she said.

For the interns, the switch from being performers to serving as mentors and handling the logistics of the show has been quite a transition.

Alex Fus, who graduated from Reynolds in 2018, is now studying drama at the University of North Carolina School of the Arts. He has enjoyed taking on the responsibility of helping students make the show as good as possible.

He thinks people who come to the show will enjoy it.

Dance is a big part of her life. For six years, she competed in dance competitions. So she was delighted when Nelson invited her to serve as Assistant Choreographer.

“I love all the kids. I am extremely proud of them. They are doing great,” said Maggard, who will be a sophomore at High Point University.

Maggard’s dream has been and continues to be to appear on Broadway one day.

Zeke Duncan, who played Shrek last summer is also back as an intern. So Shrek and Fiona are reunited this summer, Duncan and Maggard said. 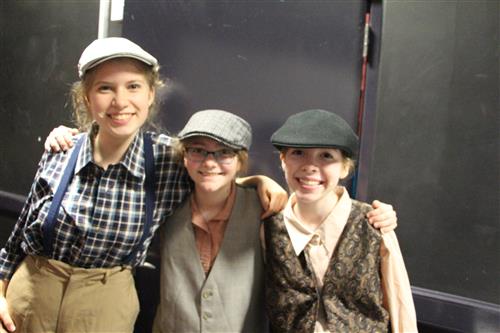 “It’s amazing to see how all the kids grow,” Duncan said.

Edwards thinks that people who come see the show will be glad they did.

“It’s a great show with great music and lots of dancing,” Edwards said.

“These kids have really, really worked hard, and it really shows on stage.”