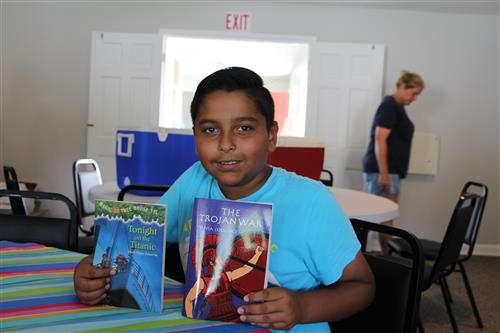 JULY 15, 2019 – When David Galvan saw a posted notice saying that people from Morgan Elementary would be coming to his community to give books to young people, he knew he wanted to be there.

“I like reading history books,” David said. “In social studies, it’s my favorite time because you get to learn a lot of things that happened in the past.”

On Thursday July 11, David and other students and parents who live in Peacehaven Mobile Home Park came to the community center, where Principal Ramona Warren and other members of the Morgan staff had spread out about 400 books on tables.

Students were invited to pick out two books to take home and keep. For his two books, David, who will be in the fifth grade at Morgan, chose The Trojan War and Tonight on the Titanic. David was looking forward to starting to read his books after he got back home. 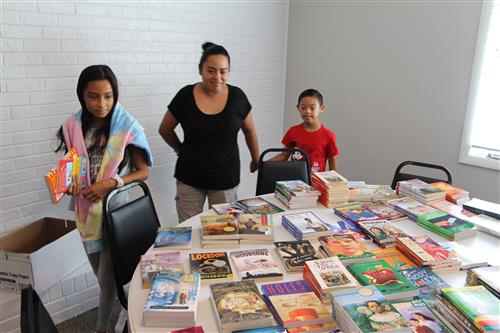 Asked whether he had a history fact that he particularly liked, David said that, in the days of pirates, some women dressed as men and served on the pirate ships.

As a bonus, the books came with treats. Along with a bag that contained applesauce and granola, young people could pick out bags of chips, and, for the big finish, they could tell Jennifer Bodenheimer what color popsicle they wanted.

Bodenheimer, who teaches second grade at Morgan, likes the fresh perspectives that students can bring to a topic.

“They teach me as much as I teach them,” Bodenheimer said.

This past school year, the people at Morgan worked to make connections with Hispanic students and their families in the community. About 65 percent of the Hispanic students who attend Morgan live in Peacehaven Mobile Home Park, and, as a way to encourage them to participate in an after-school tutoring program, the school provided a bus to take students home after the sessions. 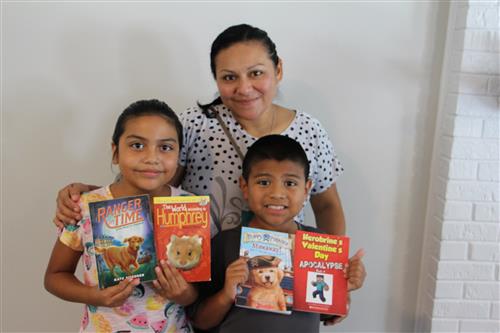 The visit to the community center was the next step in strengthening those relationships. Those on hand included Sheila Royal, the school social worker.

“I hope there is a bigger community connection so there will be more involvement between the community and school to enhance the learning opportunities for the students,” Royal said.

Donna Hayek, the Lead Secretary, and Dayenin Arellano, the Second Secretary, were also on hand. Arellana is bi-lingual, so she is able to help parents and others who may need help with English when they come into the office.

She is a major asset to the school, Warren said. “She doesn’t just communicate. She also builds relationships.”

Leslie Willard, who is a property manager with the company that owns the park, was there to greet the people from Morgan as they arrived. She was looking forward to the event.

“I hope that a lot of kids show up and get some books to read this summer,” Willard said. 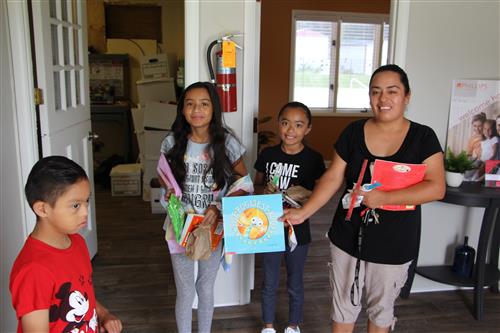 Before students and their families began arriving, the adults on hand were invited to pick out a book to be photographed with. That proved to be a real challenge for Shayla Clark, who teaches first grade. She kept finding yet another book that appealed to her.

Clark was there, she said, “to support the children.”

Angie Keaton, who teaches fourth grade, picked out How Are Butterflies Like Chickens? She had not yet read it but thought it looked like fun.

Asked what she likes about teaching, Keaton said, “It feel like we make a positive impact on the future.”

Bodenheimer, who has also taught science at Morgan, fed her love of science by choosing Bats: Creatures of the Night.

When students and their families began arriving, one of those who came in was Jennifer Martinez, who will be in the seventh-grade at Clemmons Middle. When she was a student at Morgan, Jennifer had Bodenheimer for a science teacher. The two gave each other a hug. 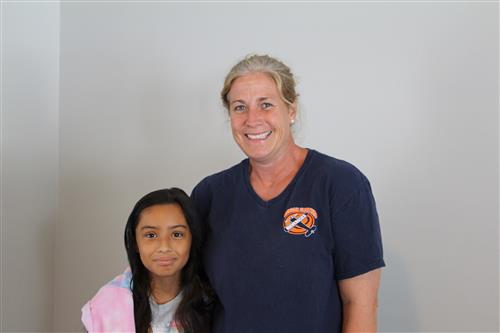 When choosing a book to read, Jennifer likes one that has illustrations. One of the books she chose was Diary of a Wimpy Kid: Double Down. She enjoyed the other books in the series that she had read, so she was looking forward to reading this one.

The other book she picked out was Geronimo Stilton Heromice: Insect Invasion, the only book in the series she had not yet read.

When Jennifer grows up, she wants to be a veterinarian. Her favorite animal is the dog. She has a Chihuahua named Snoopy who she has taught to do tricks.

“He will jump if you try to give him a treat,” she said. 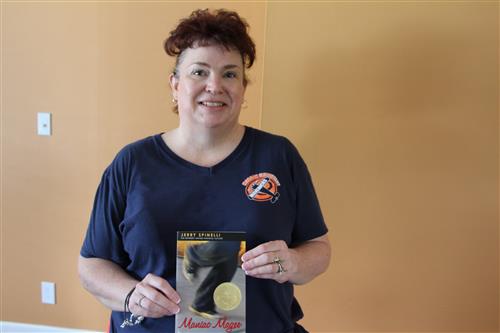 Mark Davidson – who is a deacon at St. Clements Episcopal, one of the churches in the community that supports the efforts of Morgan and other schools – dropped by. David Sisk – who, as is the school system’s Title III/EL Program Director, works with English as a Second Language programs – was also there. He visited with students while they made their selections.

Knowing that her daughters Valerie and Haylee would be excited to be there, Jennifer Ponce, had taken an early lunch break from her job as a claims adjuster for AAA to bring them.

For Valerie, who will be in the fourth grade at Morgan, her first choice was easy. She chose Happy Birthday, Bad Kitty. She had read the other books in the series and knew she would enjoy that one. With so many exciting possibilities to choose from, her second choice took a while.

Valerie likes going to school so much that she wishes that school was year round.