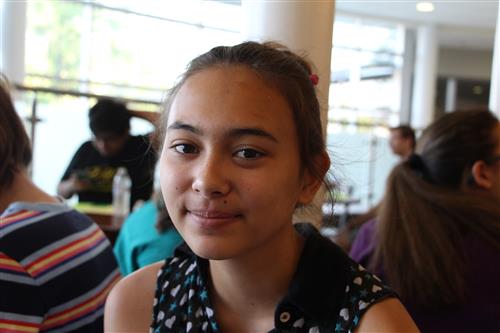 JULY 15, 2019 – When school starts, Sarah Kuyper will be taking Advanced Placement classes for the first time.

Kuyper, who will be a junior at Reynolds, thought it would be good to get a taste of what to expect when she takes AP Biology, AP World History and AP Language & Composition. So, on the Monday July 15, she joined 35 other high school students at the Career Center for AP Summer Bridge, a one-day program designed to give students a sense of AP courses are like.

“I have never been in an AP class before so this is to get a feel for it,” Kuyper said.

Another purpose of the program was to reach out to students who may feel intimidated by AP classes and to let them know that, if they are willing to focus and work hard, they will do just fine. 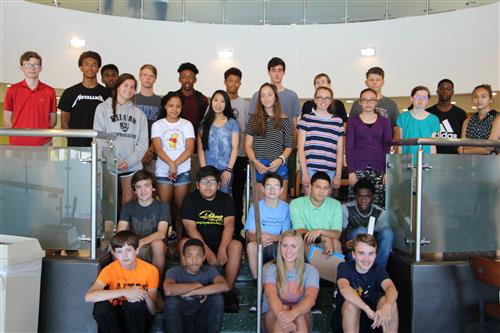 Students could choose the 50-minute sessions they wanted to participate in, and, before the end of the day, they would be able to sample such courses as AP Literature, AP Language & Composition, AP Psychology, AP Calculus, AP Biology, AP World History, AP U.S. History, AP Human Geography, and AP Environmental Science.

Each introduction was taught by a teacher who teaches the course during the regular school year. The teachers would talk about the course requirements, the kinds of tests students would be taking, and the amount of work required outside of the classroom, said Donna Walker, the school system’s AIG (Academically Intellectually Gifted) Lead Teacher for Middle/High Schools.

Along the way, students would also get a sense of just how interesting and fun such classes could be, said Tammy Burton, the school system’s AIG Data Manager.

Before the classes began, participants gathered in the Career Center’s rotunda for a light breakfast. The three students sitting at one table were cousins. Allen Anthony and Elijah Burton will both sophomores at Reagan. Gabriel Burton will be a sophomore at Kennedy. 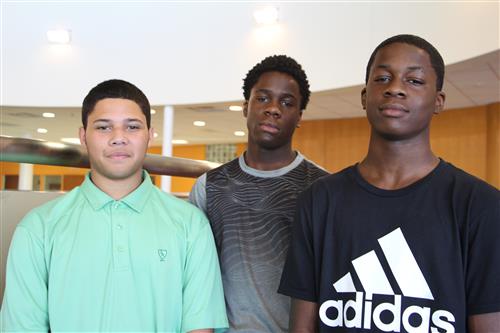 Anthony thinks that AP classes would look good on his resume one day and wanted to get a sense of whether they would work for him. Elijah Burton wants to go into the medical field one day so he thinks such courses as AP Biology would good for him to take. And Gabriel Burton, who envisions going into construction design one day, wanted to get a better sense of what AP classes would be like and what the challenges would be.

Asked whether he was looking forward to the day, Gabriel Burton, said, “Yes, sir.”

If they weren’t at the Career Center, all three said, they would probably be doing something such as working in the yard or helping a grandparent.

Kari Caines, who will be a junior at East Forsyth, has already signed up for three AP classes – Language & Composition, Environmental Science, U.S. History.

For her, the day was a way to get a better sense of what to expect during the coming year.

As a freshman at West Forsyth, Logan Feathers has already signed up for an AP history class. He joked that he wanted to get it out of the way now rather than when he was a senior looking forward to graduating. 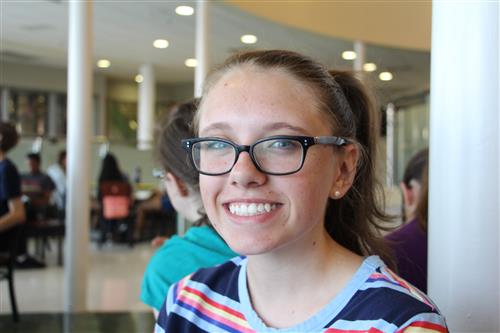 Once he graduates, he plans to enlist in the Air Force or Army. He would like to become a pilot. Because he is taller than 6 feet, he cannot become a pilot in certain types of aircraft. He is thinking that becoming a helicopter pilot would be satisfying.

Sebastian Del Campo, who will be a sophomore at Mount Tabor, has been taking honors classes. He wanted to get a better sense of whether to wants to take that next step to AP classes on his way to majoring in computer science.

For her introduction to AP Literature class, Laurel Naughton – who has been teaching at the Career Center for 10 years – was going to be using Shakespeare’s Macbeth as a tool to give student an understanding of what to expect.

“Macbeth is one of my favorite things to teach,” Naughton said. “It’s so deep.”

If she is reading one of Shakespeare’s plays purely for enjoyment, she chooses Romeo and Juliet. 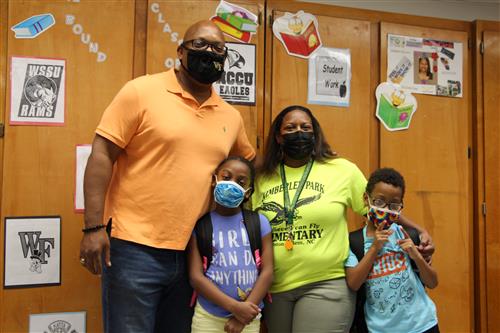 Many colleges and universities give college credit for AP classes, and, in her introduction to AP Language & Composition class, Stephanie Wallace, who teaches at East Forsyth, talked about how taking an AP class was just like taking a college class.

Her class requires a lot of writing, she said.

“Don’t let that worry you,” she said.

As part of the class, students will learn whatever additional writing skills they need, Wallace said.

In the introduction to AP Psychology class, students worked with Maureen Stanford, who has taught with Winston-Salem/Forsyth County Schools for 22 years. Since the 2005-06 school year, she has been teaching at the Career Center.

Stanford likes teaching psychology, in part, because it helps students see the world in a different way and gives them a better understanding of how everyday experience can affect our lives.

Students sometimes have the idea that AP courses are something to be feared, Stanford said. Yes, they can be a challenge, she said, but she wants them to understand that they can meet those challenges.

“I want more kids taking the course,” she said. “I don’t want them to be afraid to take the course.”

She wants them to walk away thinking, “I can do this.”

The Harris Teeter store in the Village at Robinhood shopping center provided the breakfast. Students were also provided lunch, and Costco provided some of the food served to students at lunch.

To read a story in which students at North Forsyth High talk about their experiences taking AP classes, go to AP Classes.