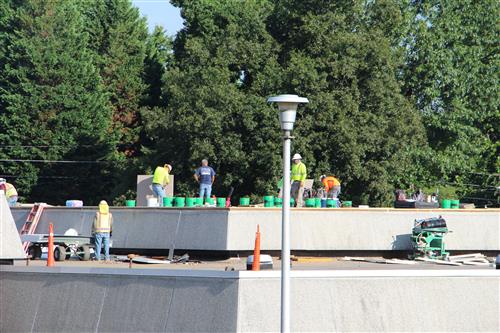 JULY 18, 2019 – When students at Forest Park Elementary return to school in August, they are going to notice some satisfying improvements.

“The feel of the building will be more comfortable than when they left,” said David Vaden, the school system’s Assistant Director of Capital Projects.

Although some of the improvements won’t necessarily be visible to students, they are important to maintaining the building and can prevent such future problems as a leaky roof. Plus, in the long run, the lower energy costs will save money for the Winston-Salem/Forsyth County school system. 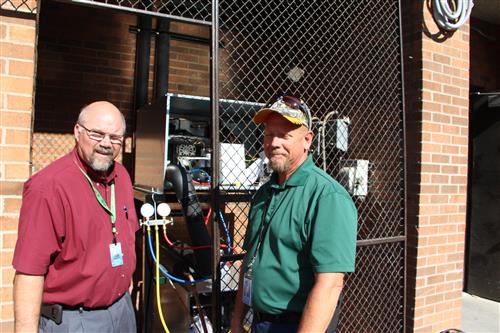 Forest Park is just one of the schools where students and staff members will find that work has been done.

Major work is being done at Kernersville Elementary, where the kitchen is being renovated, and boilers are being replaced.

At Kimberley Park Elementary, all new lighting is being installed. The lighting system there was so outdated, Mabe said, that it was no longer possible to find some replacement parts.

Students and staff members will find the school is much brighter, Mabe said.

The roof at Forest Park is one of nine school roofs being replaced this summer. Roofing work is also being done at such elementary schools as Ibraham, Lewisville, and Easton.

At Wiley Magnet Middle, the windows are being replaced.

Altogether about $5.5 million in capital projects are being done this summer, said Barry Motsinger, the school system’s Director of Capital Projects.

The money for much of the work comes from the 2016 bonds.

Because much of the work couldn’t been done while students are present, the summer break means shifting into high gear. 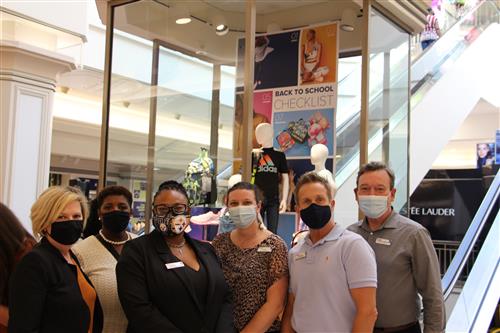 “We do this every summer,” Motsinger said. “We spend spring getting ready for this, and, the day the kids leave, we jump in.”

It can be intense, Mabe said.

Although it would be great to have the work completed by the time teachers return, Motsinger said, in some cases, that is not possible. The goal is to have all the scheduled work done by the time students return.

At Forest Park, the main building was built in 1988. With the original roofing still in place, it was simply time for it to be replaced.

“It is at the end of its life cycle,” Vaden said.

The new Carlisle PVC roofing system has an Energy Star rating, which means it is more energy-efficient than other systems.

“It really improves your heating and cooling,” Vaden said. “You’re going from a black roof to a white, reflective roof.” 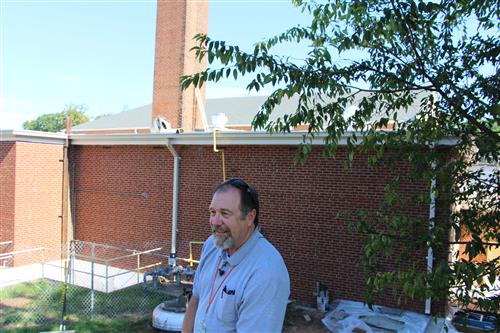 The HVAC system at Forest Park is also original, and the new system has units that incorporate modern technology.

“You are getting the latest technology,” Vaden said.

Workers are also installing a new freezer/cooler, Mabe said, that will double the school’s storage capacity.

At Forest Park, 75 to 100 people have been working on one project or another. Those at work include welders, pipe fitters, roofers, carpenters, and people working on duct work, flooring, and refrigeration systems.

The total coast of the work at Forest Park is about $1.625 million.

The kitchen at Kernersville Elementary is the only kitchen being renovated this summer. It was definitely time. The kitchen is original to a building that dates to 1956 when the building it is in was part of the high school.

The work being done is extensive. Floors in the kitchen had to be removed so that the piping underneath the floor could be replaced. 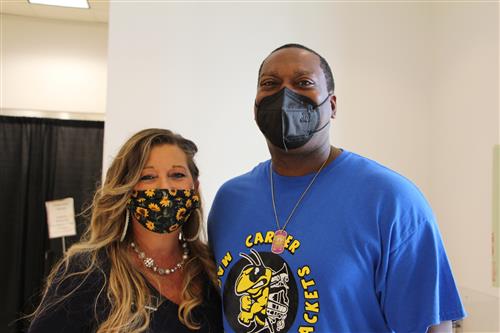 As it has been, the cafeteria manager has had to share a storage room with boxes and such.

A new bathroom is also being installed.

Behind the kitchen, the old grease trap is being replaced by one being installed underground. For now, the outline of that is visible. Once the ground is dug out and the trap is installed, nothing will be visible.

“When we are done, you won’t be able to tell we did anything,” Motsinger said.

What students will be able to see are the new cafeteria lines.

At Kernersville, workers are also replacing boilers that will serve both the cafeteria building and main building. 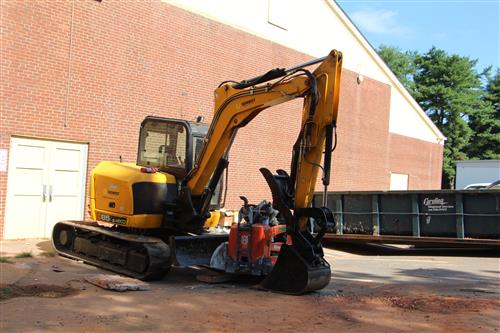 “They will be providing the heat for the whole building,” Motsinger said.

At one time, the boilers were at another school. When new HVAC systems were installed last summer, the boilers there were removed. They were relatively new, Motsinger said, so they were saved.

“We have repurposed them here,” Motsinger said.

The total cost of the work at Kernersville will be about $1.12 million.

Projects being done at other schools this summer include resurfacing parking lots, resurfacing tracks, rebuilding tennis courts, and replacing windows.

And work on such bond projects as the new home for Paisley IB Magnet and Lowarance Middle continues.

The money for projects comes from different sources. Some projects are paid for with the money voters approved in the 2016 bonds.

Some projects are paid for with what are informally known as two-thirds bonds. Every two years, Forsyth County can issue two-thirds bonds that do not require voter approval. The name refers to a state law that allows to issue bonds up to two-thirds of the amount of its net debt reduction from the previous year.

Work on high school parking lots is paid for with parking fees.