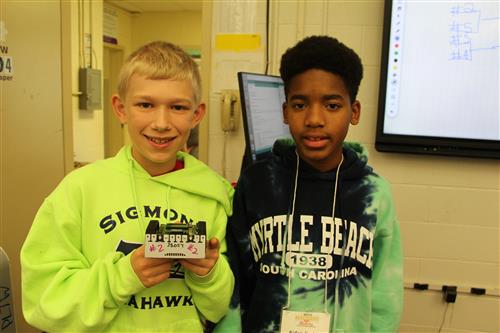 Although a SumoBot is far smaller than a sumo wrestler, in their own way, the SumoBots created by the students in the Hackers and Makers summer enrichment camp are quite impressive.

Under the guidance of Hanes teacher David Draper, teams of students built and programmed SumoBots to win, win, win. When it was time for a competition, each team would place its SumoBot in the circle. The two SumoBots would go at it until one pushed the other out of the circle.

“Everybody starts with the same exact materials,” said teacher Natalie Norman. “It’s how you program it.” 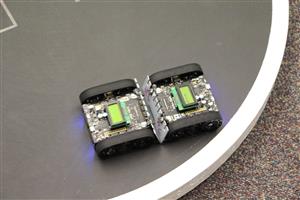 “He was so excited,” said his mother, Melissa Speaks, who is also teaching at the camp.

Along with coding, Draper said, students learn about the mechanical aspects of the bots and how to make repairs.

This is the second summer that Hackers and Makers has been held at Hanes Magnet Middle School.

The camp has a STEM (Science, Technology, Engineering, Math) theme, and students choose from a variety of classes that focus on various aspects of STEM. On the morning of Thursday July 25, while SumoBots were wrestling in Draper’s classroom, students were up to other learning adventures in other rooms.

Most of the teachers at the camp are on the staff at Hanes. Under the guidance of Hanes teacher Patrick Velde, students were building rockets. Each day of the camp, they build a different rocket. On Thursday morning, Haley Beltz was putting the final touches on the rocket she named Haley’s Apollo 11 so that she could shoot it into the sky. 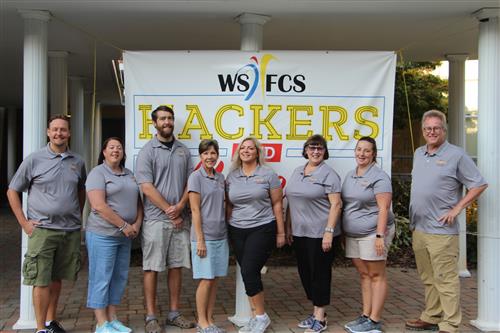 Under the guidance of Hanes teacher Patricia Prevette, students were designing and building miniature bridges. One goal was to have the bridges be able to handle as much weight as possible.

Under the guidance of Norman, who also teaches at Hanes, students were designing and building rollercoasters, too small for a human but plenty big enough for a marble.

Virtual reality, DNA, coding, and “Girl Power” were also on the schedule for the day.

“We’re trying to give the kids a great enrichment experience over the summer – keep them fresh,” Draper said.

And the camp serves to either enhance their love of STEM subjects they already enjoy or get them interested in subjects they may not be familiar with.

After the camp last year, the good word got around, and, this year, 110 students signed up to participate. This year, the camp was also able to offer 20 scholarships, Draper said.

About 30 percent of the students are girls. Speaks hopes to see an even higher percentage in the years to come.

The students come from schools throughout the Winston-Salem/Forsyth County school system – and beyond. One student – Lorelei Garrison – came from California. Each year, she comes here from San Diego during the summer to spend time with her cousins, and this year, they’re participating in Hackers and Makers.

Lorilei, who was named after The Pogues song “Lorelei," has enjoyed the freedom the camp offers. 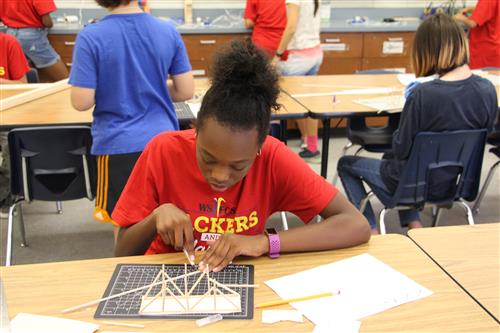 “I like that we can pick what we what we want to do and make things we want to make,” Lorelei said.

On the way to his next learning adventure, her cousin Trent Hazle, who will be in the seventh grade at Hanes, stopped long enough to have his picture taken with her.

Draper’s classroom has a 3D printer, and, in another one of the camp classes, students have been designing and printing their creations.

Draper made the point that the students don’t find programs online. They create them on their own.

The 3D modeling has been his favorite part of the camp, said Jason Twomley, who will be in the sixth grade at Jefferson Middle.

Jason likes the world of business, and he envisions owning his own business one day, or being the manager of a business he likes. 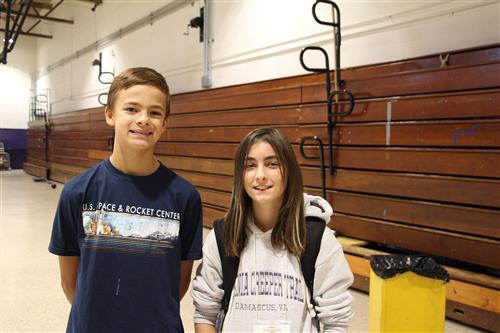 While the students were learning, so were the teachers.

“I enjoy summer camp because I get to teach outside of my comfort zone,” said Margaret Wicker, who teaches seventh-grade English during the regular school year.

Asked whether there is a book that she found particularly satisfying, she mentioned Refugee a novel by Alan Gratz that weaves the stories of Jewish boy living in the Nazi Germany in the 1930s, a Cuban girl in 1994 and a Syrian boy is 2015.

Prevette, who teaches math during the regular school year, said that she had learned a lot about compression, tensile strength, and such preparing for the class in which students design and build bridges.

The longest bridge Prevette has ever ridden across is the Seven Mile Bridge in the Florida Keys. She rode across it when she was a child.

“I remember being super scared,” she said.

As students came in on Thursday morning, a number of them stopped to talk about the camp. 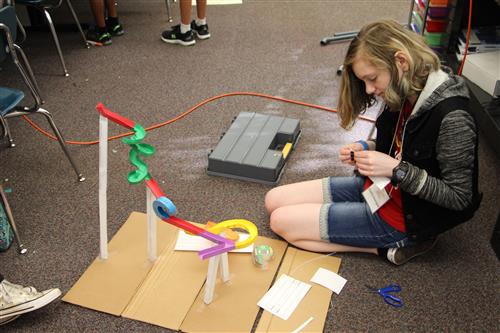 When she heard about the camp, Peyton Rance, who will be in the sixth-grade at Hanes, wanted to participate.

It’s been fun, she said. “I like how nice the teachers are and what they do.”

When Madalyn’s Wright’s father learned about the camp, he showed her some materials about it.

“I saw a few things that I hadn’t tried that looked interesting,” Madalyn said.

Her father is an engineer – these days on focuses on crop protection – and she thinks she would like to become an engineer, too.

She has enjoyed getting to choose which classes to take.

This is going to be her first year at Hanes – Madalyn went to Sherwood Forest last year – and the camp has also given her a chance to get to know the teachers a bit. The teachers are nice, she said, and she is looking forward to having them during the regular school year. 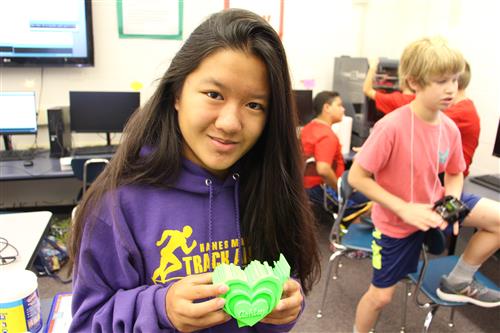 Grant Cooper, who will be in the fourth grade at Sherwood Forest, found out that he was going to the camp when his mother told him she had signed him up.

One day, he would like to be one of those people who has a YouTube show about gaming.

Annie Xiong, who will be in the seventh grade at Hanes, worried that the camp would place too much emphasis on coding, which is not her favorite subject.

She has been delighted that the camp has so much more.

“It’s a lot, lot, lot better than I thought it would be,” Annie said.

The day before she had enjoyed playing the role of a strand of DNA.

Ashley Wang, who will be in the eighth-grade at Hanes, liked the camp so much last summer that she wanted to come back this summer.

“It gives you opportunities and different experiences,” she said. 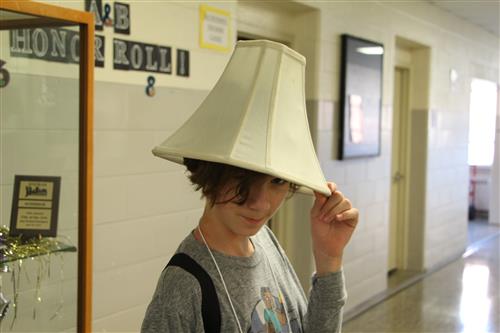 And, this year, they have activities that weren’t available last year.

Jimmy Hopkins, who will in seventh grade at a school in Guilford County, came in wearing a lampshade as a hat.

It turned out that he had taken a liking to the shade the day before when students were “upcycling” – that is taking materials that might otherwise be discarded or recycled to create something new.

As he pulled the lampshade down over his eyes, he said with the voice of someone from a Raymond Chandler novel, said, “That’s some shady business.”

The camp teachers are: