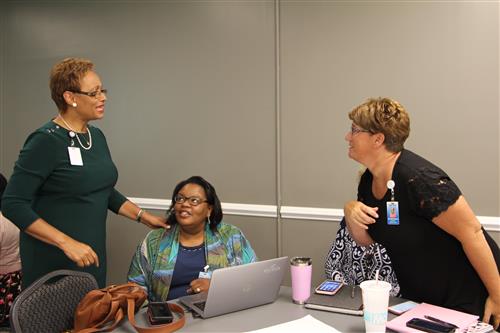 “My goal is to support you – the principal,” said Hairston, who was sworn in as the new superintendent the day before.

She had already met some of the principals when she visited their schools. Before the formal program began at the monthly meeting of principals and other school system administrators, Hairston went around meeting those she had not yet met.

Before becoming a superintendent in Georgia, Hairston spent 17 years as a principal. She was a principal in elementary, middle and high schools and in schools where many students came from low-income homes.

So she knows the challenges that the job brings every day.

“You have to focus on teachers teaching the standards every day,” Hairston said. “We in Central Office have to provide the support you need.” 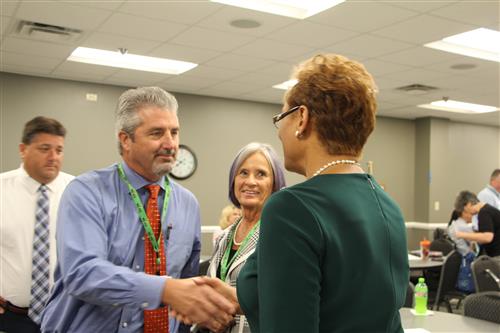 She then talked about her preliminary goals and plans, which include holding community forums where parents and other members of the community are invited to share their thoughts.

“My goal is just to listen,” she said.

One of her longer-term goals is to develop a strong strategic plan for the district. Saying that drew applause.

The program also included the recognition of schools that participated in the City of Winston-Salem’s Clean & Green School Contest in which schools beautified their grounds and took on creative projects. You will find out more about that at Clean & Green.

During the break after Hairston spoke, principals and other administrators came up and chatted for a bit.