"My Imagination Is as Real as The Air I Breathe" 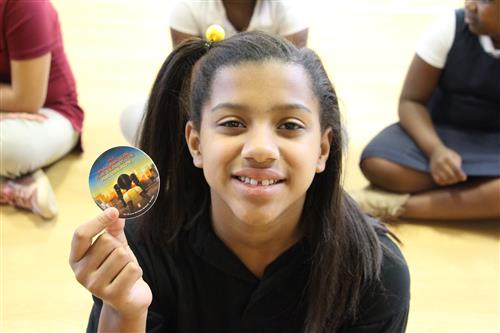 SEPTEMBER 6, 2019 – For fourth-grader Sanaiya Phillips, taking trips in her imagination is at the top of her list of reasons she likes to read.

Zoboi is all for imagination, and the fourth- and fifth-graders who came to hear her talk about her latest book – My Life as an Ice Cream Sandwich – were given stickers that say, “My Imagination Is as Real as the Air I Breathe.”

Asked what she likes to imagine, Sanaiya responded instantly that she likes imagining that her family has 100 kitties. She does have two.

Meows is named for the fact that he likes to meow a lot. Sanaiya gave the other a name she made up – Shime. 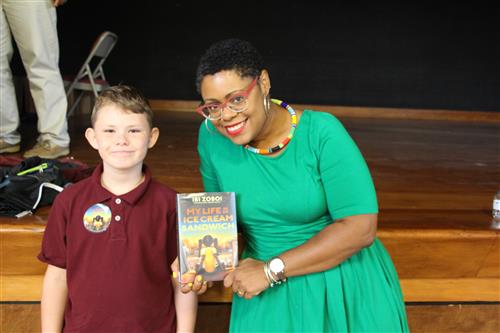 Zoboi, who lives in New York, was in town from the 2019 Bookmarks Festival of Books and Authors, which is being held Sept. 5-8, and on the morning of Friday, Sept. 6, she visited Speas before heading over to Mineral Springs Middle.

Zoboi was born in Haiti and moved to New York when she was 4 years old. When she was growing up, she said, she always wanted to become a writer. And that’s just what she did. Her earlier books include Pride and American Street, which was a finalist for the National Book Award.

My Life as an Ice Cream Sandwich came out in August. Set in 1984, it tells the story of Ebony-Grace Norfleet, a girl with a rich imagination who wants to go into space one day. Stops along the way in the story include Harlem, grandparents telling stories, and movies, television and music of the day.

For her talk, Zoboi took students through the Top 10 inspirations for her book. She invited students to participate, regularly asking them questions. With some questions, many hands went up. With others, not so many. A couple of hands went up when she asked the students who remembered 1984. So the room was clearly filled with students with vivid imaginations.

Zoboi talked with the students about grandparents and their stories, music from the ‘80s, and the history of women and of people of color in science-fiction movies and television shows. During a section on music of that time, Zoboi invited fourth-grader Empress Randolph to come up and dance a bit for everyone. 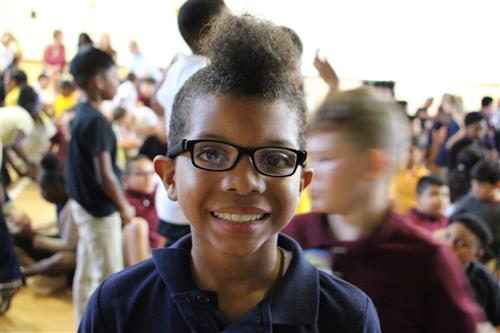 While Zoboi was talking about the television show Star Trek, which had a black woman who was a member of the crew, she used a quote from Martin Luther King Jr. about the importance of his children seeing her on the show and giving them hope for the future.

She didn’t identify King as the source of the quote, though. When she asked students whether they knew who had said it, fourth-grader Jaycin Jackson was able to say right away that it was King. Asked later how he knew that, Jaycin said he had read a lot about King and that was one of the things he had learned along the way.

After the talk, fourth-grader Dahlia Brown said she had really enjoyed it all.

“I liked how we talked about things we have never learned before,” she said.

She would definitely be reading the book, she said.

Fifth-graders Jeremy Johnson and Zion Harris liked learning new things, too. Both are big fans of ice cream sandwiches, so they thought a book with “ice cream sandwich” in the title was a nice bonus. 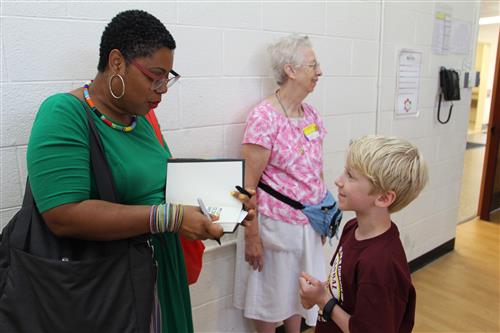 Fifth-grade teacher Aimee Henning thought Zoboi did an excellent job with the students.

“I thought it was phenomenal,” she said.

Zoboi kept the students fully engaged throughout the presentation, Henning said. “These kids were so into it.”

The audience was filled with students who like to read.

Asked what she likes about reading, Empress said, “Everything.”

Along with the story, Empress likes the words themselves and she likes the illustrations that some books have.

Fourth-grader Matthew Hoppe likes the drama he finds in books.

As students were leaving, media coordinator Samra Childers introduced student Liam McCalla to Zoboi. Liam was clutching his own personal copy of My Life as an Ice Cream Sandwich.

“He has been carrying it around all week,” Childers said. 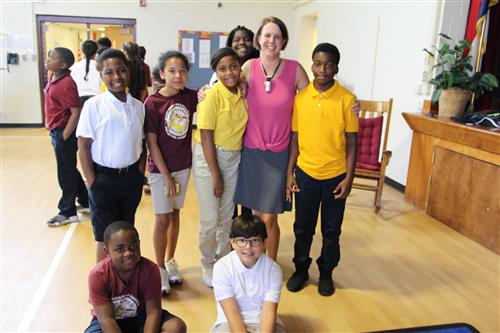 Zoboi signed it for him.

Many other Speas students will also get the chance to read the book. Thanks to a gift from the Downtown Chapter of the Rotary Club of Winston-Salem, Speas has 60 copies of the book to distribute to fourth- and fifth-graders. And, thanks to Bookmarks, the school has additional copies that students can check out of the media center.

To find out more about the festival, go to Bookmarks