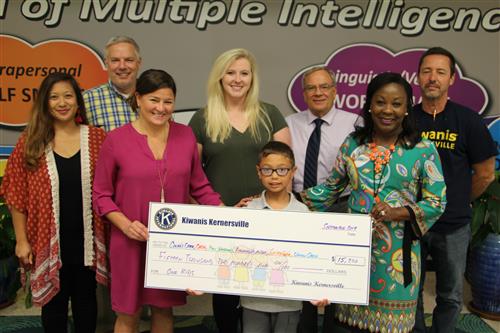 OCTOBER 3, 2019 – Thanks to the generosity of the Kiwanis Club of Kernersville, students at six schools in the Kernersville community have food to eat on weekends, books to read, refurbished playground equipment to play on, computers to use for learning, and more.

The club has named the new program KiSS, which stand for Kiwanis School Support.

“The KiSS program is an expression of Kiwanis’ recognition of Winston-Salem/Forsyth County school needs as well as a sentiment towards our kids and our superb, professional teachers,” said Mark Powell, the club member who organized the project.

A while back, the club invited principals, social workers, and others at Kernersville Middle and five elementary schools – Cash, Caleb’s Creek, Union Cross, Smith Farm, Hall-Woodward – to let them know what they needed additional money for.

The members of the club then distributed a total of $15,200 that it had raised to the six schools. On Monday, Sept. 30, and Tuesday, Oct. 1, club members headed out to each of the schools to present a giant ceremonial check that represented the total contribution the club had made to the schools.

At Cash, Principal Alicia Bailey and others at the school had determined that the money could best be used to support the school’s BackPack program, which sends home food for the weekend with students in need.

The Kiwanis Club contributed $3,900 to its BackPack program, which is sponsored by three nearby churches – Grace Presbyterian, Fountain of Life Lutheran, Kerwin Baptist.

Joining Bailey in celebrating the gift were representatives from two of those churches. The Rev. Randy Edwards is the minister at Grace Presbyterian. At Cash, many people call him Pastor Randy. Diane Stoltz, who is a member of Fountain of Life, brought her son, Xander, a home-schooled third-grader who knows a number of kid jokes.

Representing the Kiwanis Club were President Molly Smith, President-Elect Mark Powell, and club member Bruce Boyer. Smith made a point to give credit to Powell for organizing the project.

“Mark was really the leader on this project,” Smith said.

Reaching out and supporting the community is a major goal of the club, she said, and this project certainly does that.

At Cash, the BackPack program serves about 60 students by buying food packets from Second Harvest Food Bank of Northwest North Carolina. It costs about $200 to serve each student for a school year, so the program costs about $12,000 per year.

The gift from the Kiwanis club is a big help, Edwards said, and takes pressure off the need to raise money.

“It allows us to do what we want to do,” Edwards said.

Knowing that students have food to eat on weekends helps make them better students because they don’t come to school hungry, Bailey and Edwards said.

The connection with Cash and the churches in the community has grown and strengthened since Bailey became principal three years ago. In addition to the BackPack program, the church supports the schools in such ways as having church members come to the school as volunteers.

“They have formed a relationship with the teachers,” Bailey said. “They have adopted us as a school.”

“We, as a school, are very grateful for the partnership.”

In turn, the connection with Cash has strengthened the church community, Edwards said. “This has done a lot to bring the congregation together.”

“We think very highly of the staff. It’s been a real blessing for us to be a part of.”

At Union Cross, Principal Trish Spencer and her team asked for money to help replace worn playground equipment. Kiwanis provided $4,000 for that project.

“This allows our students to play and exercise in a safe environment,” Spencer said. “This is also a community school so I look forward to our community accessing these playgrounds as well.”

“We are grateful for this donation by the Kiwanis Club. We are fortunate to have great supporters of our students at Union Cross.”

At Kernersville Middle, Principal Lisa Duggins and Social Worker Lisa May determined that money for computers and for gift cards that could be used to buy supplies and other materials as the need arose would be helpful. Kiwanis provided $4,000 for that.

“The Kernersville Kiwanis generous donation will be used to increase student access to technology in the classroom,” Duggins said. “ It will also provide students with needed resources to improve student success.”

“We appreciate their continued support of Kernersville Middle School.”

At Caleb’s Creek, McPhatter and her team determined that providing clothing for boys in need, novels and other books for all students to read, and tangible incentives to promote reading would be a big help. Kiwanis gave Caleb’s Creek $1,800 to help those programs.

“Many Kiwanians already do this and will continue to do so,” Powell said.

The money given to the schools came from donations and from such fundraisers as the club’s annual golf tournament and Spring Folly. In coming years, Powell said, club members plan to continue providing money to community schools.

“We are going to make it an annual event,” he said.

In recent weeks, the Kiwanis Club has been supporting the community in other ways as well. In early September, the school held a Back to School Bash at the Kernersville Family YMCA. And it supported the Bright Beginnings program, which took students to area stories to shop for needed school supplies.