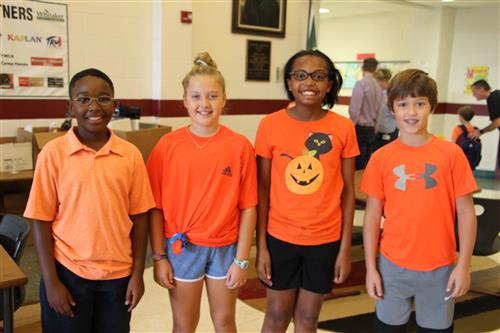 OCTOBER 4, 2019 – Whitaker fourth-grader Hamilton Norman believes in being kind to others.

“If you are not kind, someone can have a bad day,” Hamilton said. “It can spread.”

He knows that kindness can spread, too. So he makes a point to be kind.

On Friday morning, he spread kindness by holding the door open for people coming into the school.

“I opened the door for a bunch of people today,” Hamilton said.

When Principal Sharon Creasy saw how kind he was being to so many people, she invited him to be one of the students who would hold the banner leading the walk that the school was having to promote kindness and to take a stand against bullying.

Fifth-graders Kamryn Williams, Sophie Guy and Omar Conrad were the other three students she invited to hold the banner. With October bringing a focus on the importance of being kind and on stopping bullying, Creasy had scheduled the walk for Oct. 4 and invited students and staff members to wear orange. 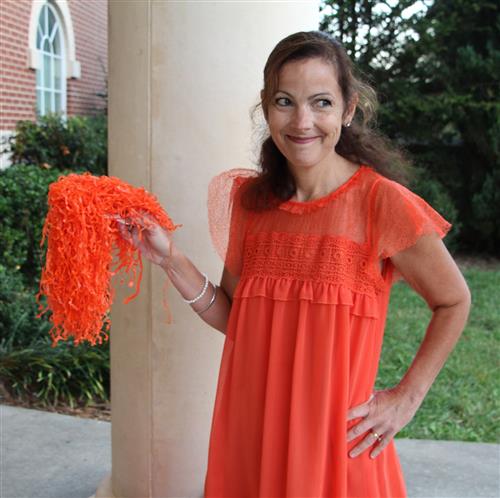 With first-grade teacher Kim Fansler being a Clemson University graduate, picking out something orange to wear was a breeze. The parade would be an excellent way, Fansler said as she came into school, to encourage students stop and think about how they treat others.

Fifth-grader Carolyne Wortham, who is a member of the safety patrol, already knew how important it is to be kind.

“If anybody is mean to each other, it won’t help at all,” Carolyne said. “Once you get bullied, you remember it. You keep it in your mind.”

It can make it hard to socialize after that, she said. So she works to be kind.

Second-grader Dominic Patella knows what is like to be bullied. A boy was mean to him by throwing a soccer ball at his head and using a bad word. It made Dominic feel sad and unhappy.

So, he works to be kind.

“Being kind is nice,” Dominic said.

Dominic’s younger brother Luca is in kindergarten at Whitaker. Luca’s orange shirt had an orange giraffe on it. Their mother, Courtney Patella, was visiting with her sons in the lobby until it was time for them to head to their classrooms. She, too, thought the parade was a good idea. 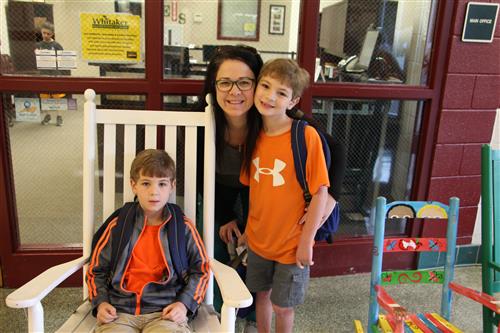 “Making kids aware of how their words and action can affect someone else and teaching them kindness can go a long way,” Patella said.

A number of other parents were also visiting with their children in the lobby. One of the handy things about orange being the color to wear was that it enabled some children to choose orange outfits with a Halloween theme.

Earlier in the week, students – including twins John and Jack Robertson, who are in the second grade – had made pictures, signs, and banners to carry in the parade. John had included Mickey Mouse in one of his pictures.

Their sister, Cam, who is in the fifth grade, knows how important it is to treat people well.

“If you are not kind, other people can feel left out,” Cam said.

To record the parade from above, Brad Oliver, the school system’s Director of Arts Education, brought a drone. The drone proved to be a big attraction when it was time for the parade to start.

As students came out the back of building, one after another said something along the lines of, “Look! It’s a drone!”

Awaiting the students and staff members at the field were 45 orange balloons that Creasy had blown up. She had also picked up a few helium-filled balloons.

Creasy said she chose to have a parade because she wanted to promote kindness through an energetic activity that students participated in together.

“It raises the issue that we all want to be treated kindly and we all have a responsibility to lead in that,” Creasy said.

The plan was for students to hold up their posters and signs and as they walked around the field while chanting, "Up with kindness and down with bullying." And students did just that.

Whitaker has about 610 students, and one class after another came out until the track around the field was filled with students.

Some students expressed kindness quietly by holding hands. Others held up signs that said such things as “Together Is Better.” One student was wearing a T-shirt that said “Kind” on the front. And here came John with his Mickey Mouse sign. 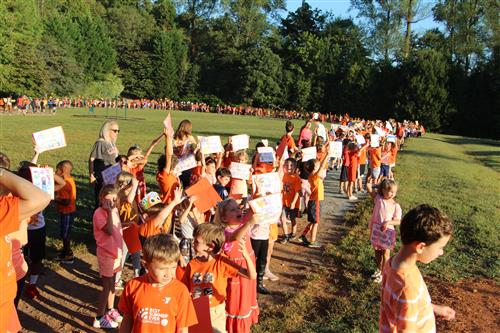 Creasy said she was also looking forward to next week’s activity. Whitaker students will create profiles of their feet designed to show they understand that, when it comes to kindness, acceptance and inclusion, “Every Step You Take Matters.” The profiles of the feet will be put up throughout the school.

Throughout the month, other Winston-Salem/Forsyth County schools will also focus on promoting kindness and stopping bullying.