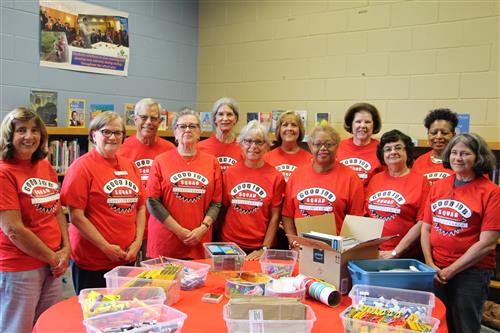 OCTOBER 8, 2019 – After Petree students headed home on Monday, teachers and other staff members headed to the media center for a staff meeting.

There, they discovered a delightful surprise awaiting them – treats such as brownies, grapes, and chips to snack on and school supplies such as crayons and markers for their students.

The snacks and school supplies – and the attention that came with them – were a gift from The Good Job Squad, which is made up of members of the Winston-Salem/Forsyth County Unit of N.C. Retired School Personnel. Each school year, The Good Job Squad visits several schools as a way of letting current teachers and other staff members know they are appreciated for the good job they do each and every school day.

The people at Petree appreciated the gesture.

“This was very thoughtful to have somebody show they care about teachers,” said Renae Moses, who teaches fifth-grade reading.

And the visit coming on a Monday was a nice bonus. 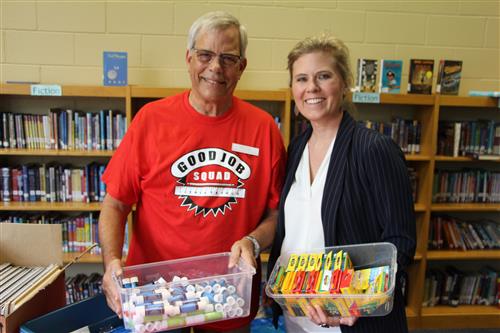 “It has been a long day,” said Alicia Wells, who is working as an instructional aid while she completes the master’s degree at Salem College that will certify her as an art teacher.

“On a Monday, we needed it,” said fourth-grade teacher Laketha Ebrahim as she enjoyed her treats. “I am grateful to know that retired teachers recognize the work of current teachers.”

Bobby Stern, who is the vice president of the WS/FC Retired School Personnel Group, arrived while school was still in session and began getting everything ready. He covered one table with bins of crayons, markers and such.

Chapter president Yvonne Williams was also on hand. As other squad members arrived, they set out on a second table the food they had brought – cheese cubes, clementines, grapes, packages of crackers and chips.

“I love to bake and it’s good to encourage teachers,” she said.

As they were setting up, Principal Heather Horton said she was delighted to have them there.

“It’s important to show teachers that you support them,” Horton said. “It’s nice to know that somebody is thinking about them and cares about them.” 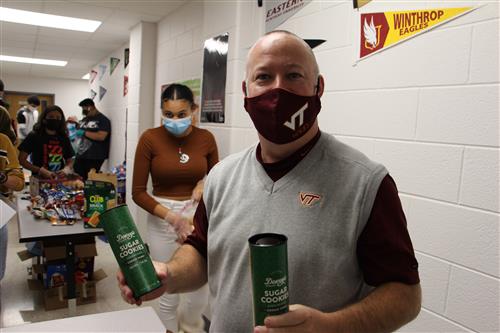 For members, by no means does retirement mean an empty schedule. When asked what she has been up to since retiring, Patsy Squire, who was the Executive Director for the school system’s Title I program when she retired in 2018, said that her schedule is packed.

She has been serving as a caregiver for her father, and, in addition her volunteer work with WS/FC Retired School Personnel, she also volunteers with the Phi Delta Kappa Sorority and with the youth group at her church – St. Paul United Methodist. Plus, she has visited such places as St. Louis and Quebec.

Marian Lovenshimer, who was an Exceptional Children (EC) teacher at Union Cross Elementary when she retired after 30 years, said that, while she is quite busy these days, one of the things she enjoys about retirement is being able to build in some time to relax.

“I don’t want everything planned,” Lovenshimer said. “I read. I garden, and I cook.”

She enjoys trying out new recipes.

Lovenshimer said she was glad to be at Petree. “I used to be on the other side. I know how it feels to be appreciated.” 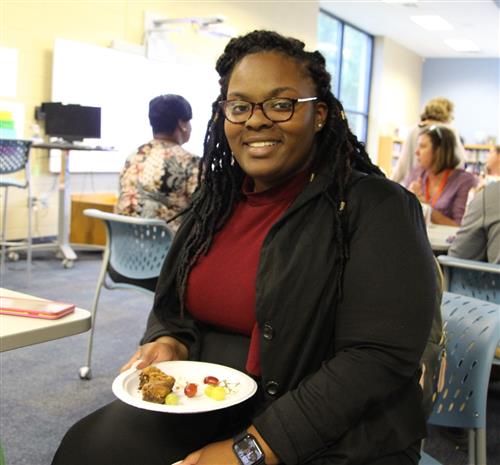 Joyce Irby was teaching science at Northwest Middle when she retired after teaching math and science for 27 years. Her three adult children all went to WS/FC schools when they were growing up, and she’s proud of where they are today. Her oldest daughter is a vice president of energy management for Duke Energy. Her son works in IT for Wake Forest Baptist Health, and her youngest daughter is a pharmacist.

Once a dozen members had arrived, Stern asked Squire to keep a running total as members said how many years they had worked as educators. The total was 400 years.

Asked what some of the misconceptions that some people have about educators, one thing that came up was the number of hours they invest. Some people think teachers show up when students do and that their day is over when students leave.

Not so, they said.

Billingsley said she left the house each morning at 6 a.m. so she would be in her classroom by 6:30 a.m. and that she didn’t leave the school until 6 p.m.

And then there were those nights and weekends they routinely worked at home several people added. 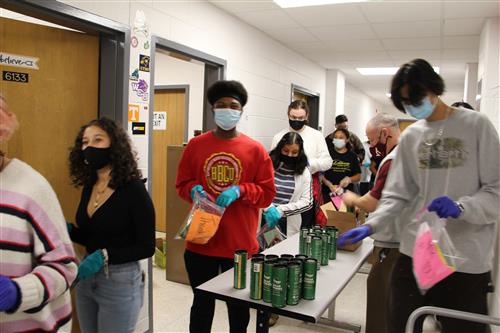 The amount of money they spent out of their own pockets for school supplies also came up. That was one of the reasons they knew that the Petree teachers would appreciate the gift of school supplies for their students.

In a hallway outside the media center at Petree is a bulletin board that offers students a glimpse into the past. The “Once Upon a Time Before We Were Teachers” board included pictures of staff members when they were in elementary school, along with the names of books that meant a lot to them then.

For her favorite book, Horton chose The Day Jimmy’s Boa Ate the Wash.

After students had climbed onto buses or been picked up by family members, teachers and other staff members started coming into the media center.

Those present included Brad Rhew, the lead science teacher at Petree. This is his second year at Petree. Marquis Simpson has been teaching health and physical education at Petree since the school opened. Those who didn’t already know that learned it when Stern would recognized him for his service. 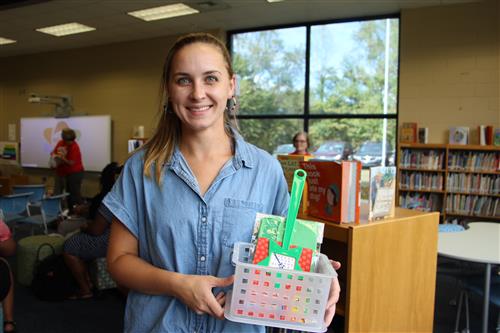 The members of the Good Job Squad were there, Stern said, because they wanted to let everyone know they are appreciated.

When it came time for the drawing, some teachers – Marina Moore, who is an EC teacher, was one – got a bonus treat. When their names were drawn, they got to go and pick out a present for themselves.

With it being a staff meeting, the time came to get on with the business at hand. As everyone finished up their treats, Horton and Kristine Brixus, who is the Instructional Facilitator, got everything underway. That included introducing Tasha Barknight, who serves at the Math Coach for Petree and five other schools, to everyone who had not yet met her.

“I think it was a huge success,” Stern said later. “I think we certainly accomplished our goal of making the staff feel appreciated. Kristine Brixius told me that this afternoon was the happiest she has seen her staff all year. I am glad I selected this school for our first visit.”

On Nov. 20, The Good Job Squad will visit Brunson Elementary. Later in the year, members of the squad will go to Paisley IB Magnet School and Gibson Elementary.