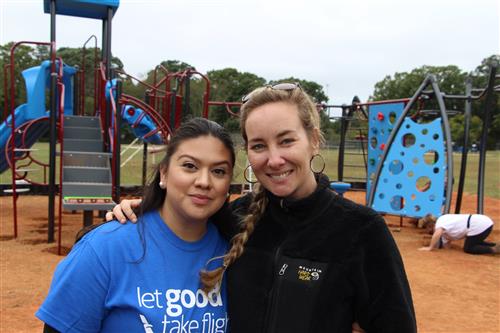 OCTOBER 8, 2019 – A couple of years ago, Speas parents Karina Bowen and Heather Hosey were talking about how great it would be for students to have a bigger and better playground.

And now they do.

On the morning of Wednesday Oct. 9, the school will dedicate an all-new, 1,800 square-foot playground.

Here’s how it came about:

Bowen, who works for American Airlines here in Winston-Salem, serves as the Community Relations Chair for the Latin Diversity Network. When she and Hosey began talking about a new playground, Hosey was the president of the PTA.

In the past few years, American has built a seven playgrounds across the country. When Bowen and Hosey asked the company to consider building a playground at Speas Global Elementary, the company took note of such factors as the school having a diverse student body – including a high percentage of Hispanic students – and agreed to build one. 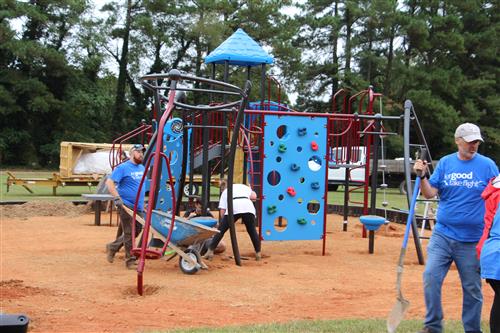 When company officials decided to build a playground at Speas, they did so in partnership with Carter’s Kids, a non-profit organization established by television personality Carter Oosterhouse that builds playgrounds to encourage physical activity. The Speas playground brings the total number that Carter’s Kids has built to 83.

On the afternoon of Tuesday Oct. 8, the project was well underway.

It was quite a crowd.

Along with people from American Airlines, Carter’s Kids, the Sinclairs and hired workers, the group included people connected with Winston-Salem/Forsyth County Schools, such as Bowen and Hosey, Principal Robert Ash, Assistant Principal Paul Pressly, and people who work for the school system’s Operations Department.

These days, Bowen’s daughter, Kaitlyn is in fifth grade at Speas, and her son, Cinco, is in third grade. 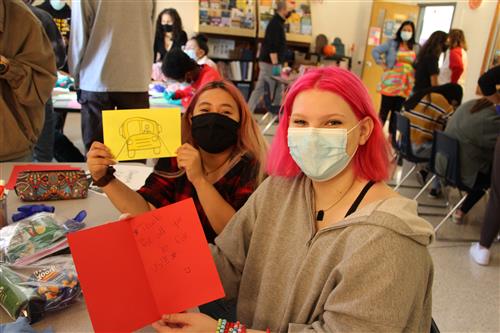 Speas is a great school, Bowen said. “Mr. Ash and his faculty are amazing.”

Hosey’s son, Dashiell is in the fourth grade. And, yes, he was named after writer Dashiell Hammett.

These days, Deborah Edwards is a Customer Care Manager for American Airlines. Back when son, Jason Hobbs, and daughter, Annette Hobbs, were in elementary school, they went to Speas. That was a while back. Jason is now 31 and Annette is 29.

She, too, is excited about the new playground.

“It’s invaluable,” Edwards said. “The need for something like this is well past its time. That’s why I wanted to come here and be a part of it.”

Edwards has a long history with the school system. She graduated from North Forsyth High, and, at one time, drove a school bus.

Representing American Airlines at the national level was Katy Phillips, the Manager of Community Relations and Corporate Giving. She had come up from Texas.

American Airlines is spending about $75,000 on the project, Phillips said.

“It’s important for American Airlines to give back to the community where our team members live and work,” she said. 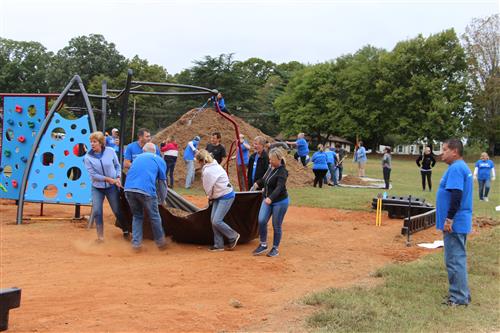 Quay Chilcott, who is the Executive Director for Carter’s Kids was there, too. When traveling the country looking for ways to support young people and the communities live in, Chilcott said, Oosterhouse saw that building playgrounds would be a good way to do that.

When thanking American Airlines, Carter’s Kids and Sinclair Recreation, Ash noted that the new playground will serve not only Speas students but also children in the community who come to play in the field beside the school.

“This place is packed on the weekends,” Ash said.

While people were working on the new playground, fourth-grade teacher Amanda McGarry-Pike came out with her students and headed over to the much more modest current playground. Along the way, two of her students did indeed stop at a soccer goal for a bit of fun tugging on the net.

“This is awesome,” McGarry-Pike while looking at everyone working on the new playground. 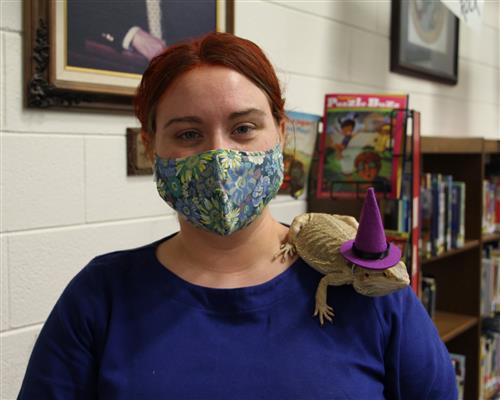 It’s going to be great for her students, she said. “I’m excited the kids are having an opportunity to have something more to play on our here.”

Her students are really looking forward to playing on it, she said.

“They are super excited.”

At 10 a.m. on Wednesday Oct. 9, a ribbon-cutting ceremony will be held at the playground. Expected guests include Carter Oosterhouse, community leaders, school district leaders, volunteers and parents.

After the ceremony, students will have the chance to play on it.