Everyone in the Winston-Salem/Forsyth County school system community is welcome to vote for Stacey Warner as the FSIoffice Teacher of the Year. To vote for her, go to Vote 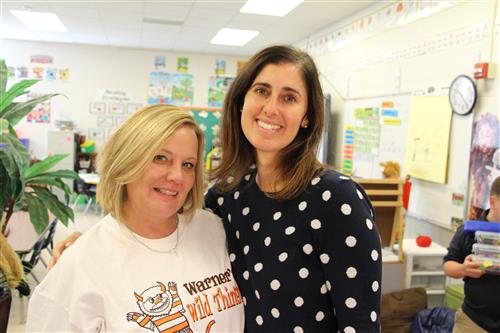 OCTOBER 18, 2019 – At Vienna Elementary, parents and colleagues describe Stacey Warner as a loving person who helps and encourages every student.

“I think she is dedicated to her students, and she makes learning fun for the kids,” said PTA president Stacy Crockett. “That way they enjoy their time coming to school.”

Warner came to Vienna 11 years ago as a fifth-grade teacher. Three years ago, she chose to make the switch to kindergarten.

The respect and appreciation that teachers, parents and others in the Vienna community have for her led to Warner being nominated for a Teacher of the Week competition that could lead to her being able to attend a Carolina Panthers football game and to Vienna receiving $5,000 in school supplies.

When one parent learned about a Teacher of the Week competition that FSIoffice, an office supply company based Charlotte, was sponsoring for teachers throughout North and South Carolina, the parent – nobody knows whether it was a mom or dad because the nominations were anonymous – wrote about what a wonderful teacher Warner is. 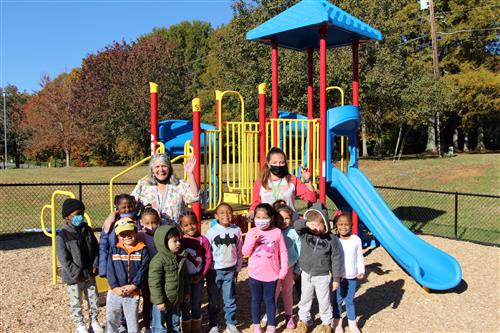 This is what the parent wrote:

“Ms. Warner is an amazing teacher! She goes above and beyond what is asked of her and is everything you would want in a teacher: hardworking, sweet, kind, caring, smart, helpful, always going the extra mile and so many other amazing qualities. I was so blessed to have her as my son's kindergarten teacher.”

“That is a very tough age for a child as everything is so new, and as it is exciting, but a little scary too. But she was able to put my son at ease. She still continues to check on him in first grade. She is one of the most loveable, sweet people you will ever meet and I'm happy that I have gotten to meet and know her.”

“She is everything you want in a teacher and truly cares about her children she teaches and wants them to grow and meet their full potential. She has met and exceeded expectations. She is the perfect choice to win this award!”

FSIoffice chose Warner as one of the Top 10 teachers for Week 8 of the competition. Warner found out about it when a company representative showed up at the school on Wednesday, Oct. 16 with a box of office supplies. 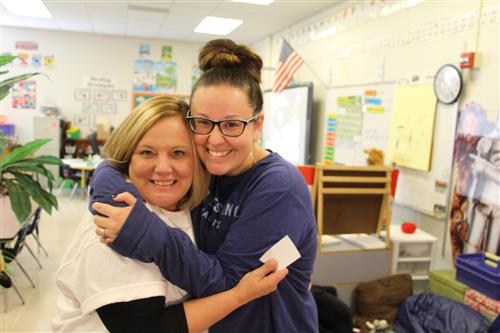 Being who she is, Warner distributed them to her fellow kindergarten teachers, keeping only a couple of pens for herself.

“That’s how she is,” said Principal Lee Koch. “That’s why people love her so much.”

Warner has a gift for connecting with others builds relationships with her students and their families.

People can now vote online for her through Wednesday, Oct. 23. If she is chosen as Teacher of the Week for Week 8, she will be heading to Charlotte on Dec. 15 for a Carolina Panthers game against the Seattle Seahawks.

If she finds out there that she is the overall winner, the school will receive $5,000 in office supplies.

Glazener said that she felt honored to be nominated. That a parent would take the time to fill out a nomination meant a lot to her. 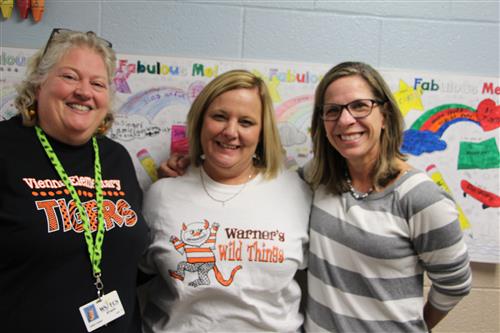 As a first-grade teacher, Glazener has some of the students that Warner taught the year before. As a way of helping Glazener get to know them and understand ways in which she can serve them, Warner will talk to her about each student’s needs and interests: “He loves dinosaurs.” “She loves gymnastics.”

Faber said that, when they were both on the same teaching team, she learned a lot from Warner.

“She is just so fabulous – very helpful,” Faber said.

Lisa Davis, who is now the Assistant Principal at Vienna, also taught with Warner.

“Stacey is so deserving of this nomination,” Davis said.  “She is one of the best teachers that I know.  When I think about what a leader looks for in a teacher; from building relationships with students and community, a sense of urgency, engaging and exciting teaching, mentoring teachers, etc. Stacey is talented at each part of her job!

“She has a natural knack with students and she has the craft of teaching, which I feel cannot easily be taught.”

“I had the privilege of teaching with her for several years in fifth grade - and she was a natural with those children.  As her AP, when she shared with me that she wanted to move to K, I didn't think anything about it – because a dynamic teacher can teach anything! And she has!” 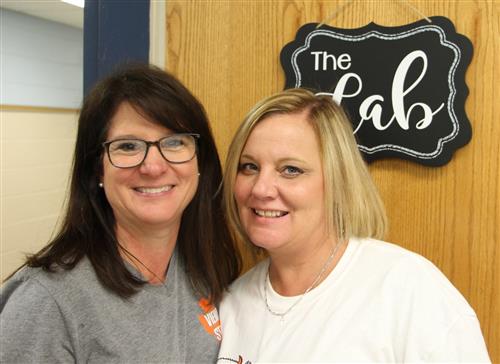 “Stacey knows her curriculum, she is on top of her game daily, but, more than anything, she loves the children that grace the doors of her classroom.  She has a heart for helping others – a heart for loving ALL children and a heart for lifting others up.”

“Stacey is also the ultimate team player.  She is one of the most selfless people I know.  She would do anything for her colleagues; she steps in without even being asked, to lift others up and encourage them.  I am so glad she teaches at Vienna and I'm even more blessed to call her my friend.”

Warner has been with Winston-Salem/Forsyth County Schools for 23 years. Before coming to Vienna, she was at Old Town Elementary, where she taught second and third grade before becoming the Curriculum Coordinator there.

Warner grew up in Forsyth County. She has two grown sons. Her older son, Chris Hamilton, works with a cabinet maker, and her younger son, Will Hamilton, is a sophomore at Western Carolina University. Her parents, Bob and Liz Westerburg, split their time between here and Cherry Grove. She loves spending time with family both here and at the beach.

Warner started school in the days when students went to a number of schools as part of the district’s efforts to more fully integrate schools. She started at Rural Hall Elementary and went to Brown (now closed), Southwest and Paisley before heading to Mount Tabor, where she graduated in 1989. 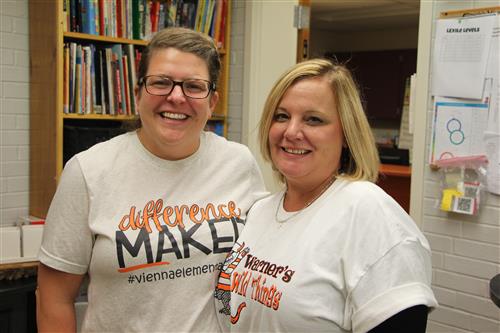 Early on, she didn’t see herself becoming a teacher. She started school when she was 4 and struggled a bit along the way.

“I did OK but I was never the top of my class,” Warner said.

She didn’t know what she wanted to do for a living until one of her teachers at Mount Tabor took her aside and told her that he thought she would make a good teacher. That teacher was Frank Martin, who went on to become the principal at Reagan High. After retiring, he came back to serve as Athletic Director at Mount Tabor.

What prompted him to say that, Martin said, “she has a great, caring personality” that he thought would be good for students.

He was right about it being the perfect path for her.

After heading to Winston-Salem State University, where she earned a bachelor’s degree in Elementary Education, she became a teacher in elementary school.

“I never looked back,” she said. “My heart was never anywhere else but elementary school.”

At Old Town, although she found her work as a Curriculum Coordinator rewarding, she decided that she wanted to return to the classroom. So she headed to Vienna.

After teaching fifth grade, she decided that she wanted to teach kindergarten.

“She took a leap of faith,” said Emily Ruebel, who also teaches kindergarten at Vienna.

And she’s done a wonderful job, Ruebel said. “It’s been amazing to work on the same team.”

Warner said she is glad she made the move.

“Of all the grades I have taught, the most rewarding is definitely kindergarten,” she said.

One reason is she likes that so much movement comes so fast.

Kristen Trivitte, who teaches fourth grade at Vienna, has also come to know Warner as a parent this year.

“Stacey has been a valued friend and colleague over the last few years, but this year she has become so much more! This year, she is teaching my son!” Trivitte said.

“As a parent, you want the best for your child and worry tremendously about their kindergarten year and what their first experiences in school will be like. Stacey has been wonderful for my son, who just does not fit the traditional mold.”

“He feels loved and nurtured in her room, even on days when things are just not right! She also reaches him academically, and he enjoys learning and making her proud!”

One of Warner’s favorite picture books is Where the Wild Things Are by Maurice Sendak. She refers to her students as “Warner’s Wild Things.” She had T-shirts made, and, when students feel like it, they wear them to school. As it happened, a number of them were wearing them on Friday, Oct. 18.

During the summers, Warner has been participating in a school system program called Power of K that was created to help children who haven’t been to pre-school or to child care make a smooth transition to kindergarten.

Although Warner is happy to have been nominated, she is just one of many special people at Vienna, she said.

“I am surrounded by extraordinary,” she said.

As a way of making that point, when fourth-grade teacher Missy Safrit came into the room where Warner was talking, Warner talked about how much Safrit does for fourth-graders.

Warner is a phenomenal teacher, Safrit said. “She loves kids so much.”

Safrit pointed out that Warner cares about them so much that she chose to return to the classroom after taking an administrative job as a Curriculum Coordinator.

Safrit agrees with Warner that Vienna is a special place.

“We treat each child individually, and we work as a team,” she said. “Everyone fits in here.”

Although it’s nice to be recognized, Warner said, what she is most excited about is the possibility of Vienna not only receiving $5,000 worth of office supplies but also receiving some attention in the wider community.

“I feel like Vienna is a hidden gem,” Warner said. “I want the students here and the school to be recognized.”

When Warner was growing up, her father was fond of saying, “Oh, my word!” She, too, came to use the expression and ended up getting a tattoo on the inside of her right forearm that says “Oh, my word.”

If she does indeed win the $5,000 worth of office supplies for Vienna, she said, you can rest assured that, at some point, she will say, “Oh, my word!”

Everyone in the Winston-Salem/Forsyth County school system community is welcome to vote for Stacey Warner as the FSIoffice Teacher of the Year. To vote for her, go to Vote