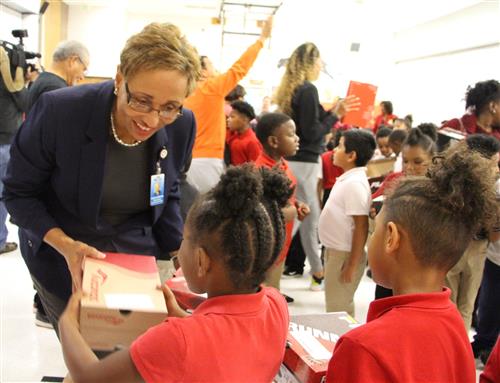 For good reason. Before the end of the day, every, single student at North Hills would have a brand-new pair of shoes.

“I am elated today,” Krafft said. “Today is a fabulous day.”

In the gym, German Garcia, the school’s Parent Involvement Coordinator, was zipping around  making sure that everything was ready for the first group of students – students in pre-kindergarten through second grade.

After the younger students, receive their shoes, students in grades three through five would come into the gym to get their shoes.

For each class in the first group, a stack of shoe boxes that had each child’s name on it had been set up. 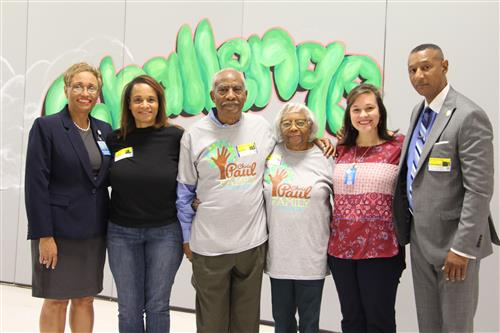 A lot of work had gone into the project in the days leading up to the giveaway. To ensure that each child had just the right shoes, Garcia and volunteers at the school had spent hours measuring students’ feet. Volunteer Darlene Kinchen of Core Character Family Advocates had then done all the computer work necessary to coordinate it all and make sure that a box of shoes was matched to each child.

As a school where a high percentage of students come from low-income homes, many students certainly needed new shoes. The project was about more than that, though. It was also about letting students know that people care about them.

“It brings the morale up,” Garcia said. “They see what the school is doing for them.”

Using money donated by the Chris Paul Family Foundation and by Rack Room Shoes, the project had been coordinated by Shoes That Fit, a nonprofit organization based in Southern California. Nekeda Newell-Hall, the organization’s Vice President of Strategic Partnerships, had flown in to be there for the shoe giveaway on Thursday, Oct. 17. Brenda Christmon, the Director of Corporate Communications for Rack Room Shoes, was there, too. 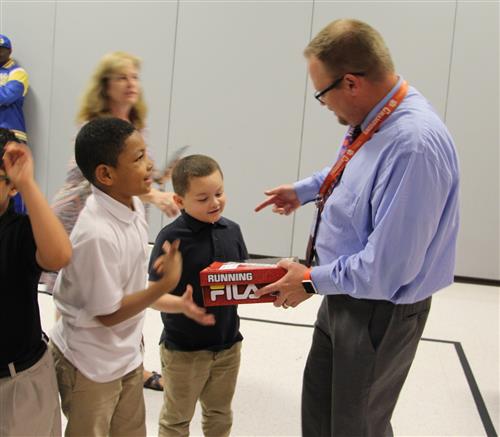 Krafft thanked supporters for their generosity.

One of the volunteers present was Susan Speaks Frye, who was the Forsyth County Clerk of Court before retiring. She has been volunteering at North Hills for some time. Also there were Instructional Superintendents Karen Roseboro and Rusty Hall and other members of the Sheriff’s Department and Police Department.

So, when teachers started bringing their classes into the gym, they found many adults who were there because they care about the students at North Hills.

When each class had lined up in front of the stack that contained the shoes for the students in that class, several of the adults spoke. Because everyone was eager to put the shoes into the hands of each student, no one spoke for long.

When Chris Paul’s mother, Robin Paul, spoke, she said, “We know having a brand-new pair of shoes can make a big difference.”

When Chris Paul’s father, Charles Paul, spoke, the said, “Always remember you are important. That’s why we are here today.”

Garcia let teachers know that, if for some reason, it turned out that a particular pair of shoes wasn’t a good fit, they would sort that out later.

When it was time, Hairston and the others would pick up a box of shoes, read the name on it, and walk down the line of students until each student was matched with his or her shoes. 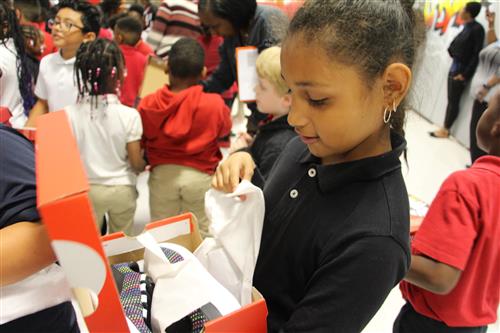 Many hugs were shared along the way.

When asked what they thought about their new shoes, several kindergarten students offered one word responses:

If a student wasn’t there, their teacher would accept the shoes to give to them later.

This was a wonderful gift to the students, said kindergarten teacher Kathryn Packett.

“I think it helps them feel good about who they are,” she said.

As the first round of students headed back to the classrooms, Frye and the others started stacking boxes of shoes for the older students, so they, too, could receive new shoes delivered with love.

To read the story about the partnership that the Forsyth County Sheriff’s Department has established with North Hills Elementary, go to Partnership.