Along with performances at school, the Dance Club at Caleb’s Creek Elementary will participate in the Kernersville Christmas Parade, which is scheduled to start at 2:30 p.m. on Sunday, Dec. 8. 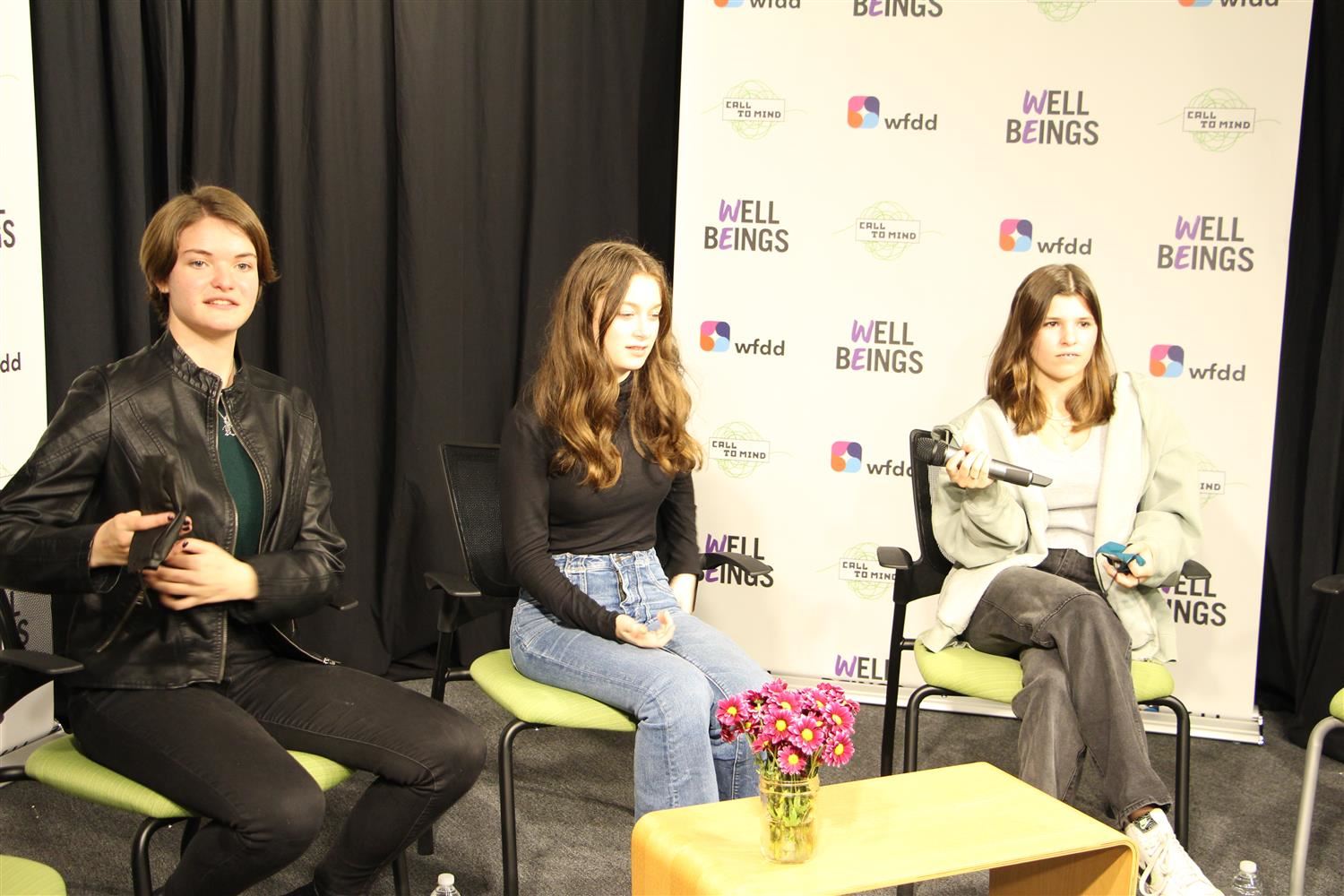 NOVEMBER 5, 2019 – When Shelby Ijames invited Caleb’s Creek students to come to an open audition for a new dance club that would meet before school, she didn’t know how many students would be there.

When 78 students showed up, she knew that they would be embarking on an exciting new adventure at the elementary school. Later that day, she enjoyed seeing the smiles on the faces of the students as they talked with their friends about the dance club.

Other members of the staff and parents quickly committed to working with her, and, now each Friday morning, students in kindergarten through fifth grade come to school an hour early to rehearse for coming performances that include participating in the Kernersville Christmas Parade and holiday shows at the school.

A club that meets before school means that students have to get up earlier.

It’s worth it, though, said fourth-grader Zoey Wren. “I love dance so much. I don’t like staying still. I like moving a lot.” 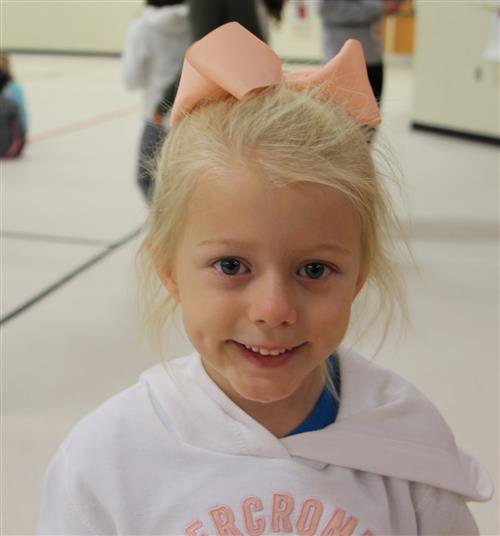 Kindergartener Raegan Olive likes the club a lot, too.

First-grader Kriselia Nushi said that her mother thought she would like to learn how to dance. Her mother was right. She has enjoyed dancing.

Kriselia plans to teach her mother some of the dance moves they have been learning.

First-grader Ozioma Ndupu said her mother likes to dance and thought she would like to dance, too. And she does.

“I like it because you stretch and you get more movements,” Ozioma said.

On the morning of Nov. 1, they were among the students in the gym for rehearsal.

Parent Jocelyn Rowe was among the volunteers working with them. Rowe’s children go to Caleb’s Creek. Adelyn is in second grade, and Gabe is in kindergarten. Rowe was already teaching dance, and, when she heard that Ijames was establishing a dance team, she told her that she would like to help.

It’s been great for all of the students who are participating, Rowe said. “It’s giving them a goal to achieve. They are getting to something fun with their friends at school, and they are excited.” 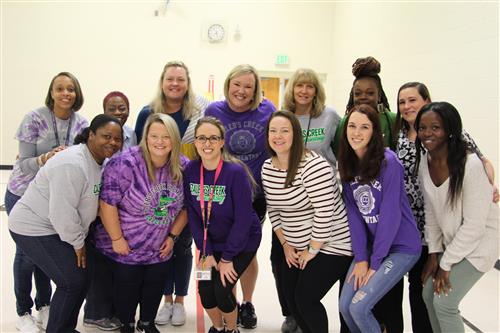 Adelyn and Gabe stopped rehearsing long enough to answer the question: “What makes your mother special?”

Tenesia McNear, who is the school’s testing coordinator, is one of the staff members serving as a volunteer. Before starting to work at the school, McNear came to know Caleb’s Creek as a parent, and she is delighted to see the energy that the dance club has brought to the school.

“I have never seen anything like it,” she said.

Alexis Tomlinson, who teaches second grade, also volunteers with the dance team. One of the things she likes about participating is being able to stay connected with students she had in earlier years.

Plus, said Gina Hill, who teaches fifth grade, volunteering gives them an opportunity to get to know students they might not know otherwise.

Tameka Rucker, who teaches students in the Exceptional Children program, likes being involved in the school at another level. And then there is the opportunity to see all those smiling faces, she said. 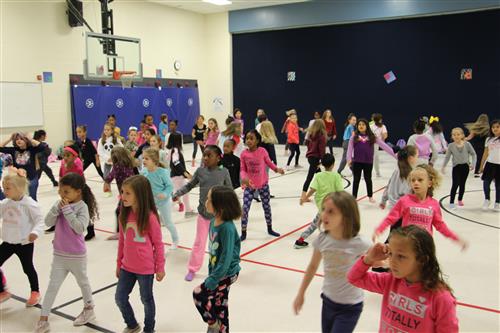 For Principal Rita McPhatter, the dance club’s benefits include physical fitness and strengthening students’ cognitive abilities and memory skills through learning choreography. Plus, it’s fun and builds teamwork and collaboration.

“It give kids who don’t shine academically a way to shine another way,” McPhatter said.

Caleb’s Creek has been focusing on social and emotional learning recently. Surveys showed that students were interested in more clubs and other activities, McPhatter said, and they have been working on ways to provide students with new ways to express themselves.

Along with the dance club, the clubs established so far include a Lego club, a Spanish club, and a running club.

Ijames is the Instructional Facilitator at Caleb’s Creek. Dance has long been an important part of her life. 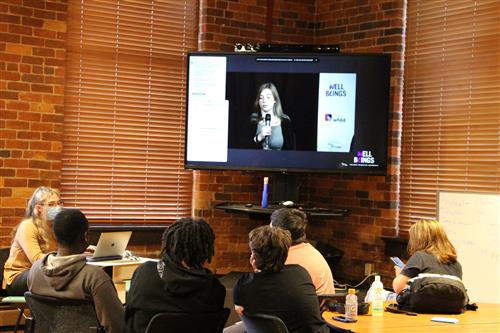 She went on to dance competitively.

Since she came to Caleb’s Creek five years ago, she has been thinking about establishing a dance club at the school. She credits music teacher Ashlee Kiger with providing the spark that made it happen. Kiger had a vision for including dance in the school’s holiday programs.

“It was just the right time,” Ijames said.

Along with rehearsing dances to go along with such songs as “Rockin’ around the Christmas Tree,” they have been working on making costumes for the students to wear.

What has made it possible is the support of all of the parents and staff members who are serving as coaches.

“I couldn’t do it without them,” she said.

“Dance brings so much happiness and joy for the students,” Ijames said. “It give them an opportunity to feel successful in a way that is not just academic, and it really builds their self-esteem.”