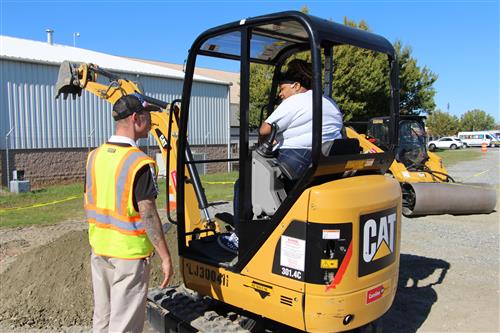 “It was awesome,” Gaither said after she stepped out of the excavator.

Next up at the mini excavator were Reagan students Mia Kuharcik and Jory Evans.

Although working the controls was a real challenge, Evans said afterward, it was all lots of fun.

As a freshman, Kuharcik does not yet have her driver’s license. The biggest such adventure she had to compare the experience to, she said, was driving a car around a parking lot.

Operating construction equipment was just one fun learning adventure that students could go on at the two-day event co-sponsored by the Winston-Salem Chamber of Commerce and the Winston-Salem/Forsyth County school system.

Held on Tuesday, Nov. 5 and Wednesday, Nov. 6 at the Winston-Salem Fairgrounds, Construction Career Days offered students the opportunity to visit with representatives of more than 50 businesses, as well as such colleges as Forsyth Technical Community College.

“It gives students an opportunity to see the wide variety of careers that are available in the construction trades,” said Bruce Sherman, the school system’s co-Executive Director of Career Technical Education.

It’s a broad field, and possibilities include becoming an architect, a welder, a roofer, a brick mason, and much more. In the stations set up inside the fairground’s Education building, many businesses gave students the opportunity to try such things as laying brick.

Seeing the excitement of participating students makes it all worthwhile, said Shirley Bynum, the other co- Executive Director of Career Technical Education. 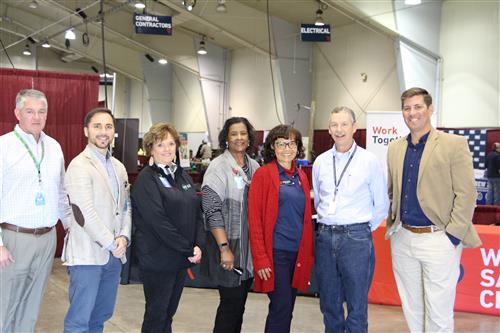 In addition to serving as Director of Planning & Construction for the school system, Colon Moore also serves as the co-chair of the Chamber’s Construction Council. In planning the event this year, he said, they decided to expand the program to give students the opportunity to learn not only about careers in construction but also careers in manufacturing, auto-body repair, and commercial cleaning.

The Education Hub set up at the event also provided students with the opportunity to find out more about the educational path that will make them ready for the career they want to pursue, said Rodessa Mitchell, the Chamber’s Vice President for Education & Workforce Development.

Business in construction and these other industries is strong, Mitchell said, and many chamber members are struggling to find the talent they need. Participating in the event helps them to “create the future work force,” she said, and make connections with young people who may come to work for them one day.

Taylor Martin, who is with roofing contractor The Bulldog Group, said they like the opportunity to make contact with high school students, and she knows of at least one young man who came to work for the company after learning about it at Construction Career Days.

Roofing is a good business to get into, Martin said. The starting wage is $15 an hour (S20 for those who enroll in a special field leadership program), and workers can advance and earn more money as they become more skilled.

At The Bulldog Group’s station, students were invited to use a power drill to screw in plates that, on a job, would be used to attach roof insulation.

“It gives them an opportunity for hands-on,” Martin said.

Screwing in a screw with a power drill is not the sort of thing that you can easily do right away, Mount Tabor student Tymir Hill soon discovered.

At first, he said, “It was frustrating.”

Once he got the hang of it, things went more smoothly.

While students outside were operating real construction equipment, students inside had the opportunity to take a seat and operate virtual equipment.

At one station, Mount Tabor junior Joshua Graddy took the controls of a virtual front-end loader.

“It was pretty fun,” he said afterward.

About 125 Mount Tabor students came to the event, and, while they were there, Principal Ed Weiss stopped by. Reynolds, Walkertown, East Forsyth, Reagan, Kennedy, and the Career Center were the other high schools with students there on Wednesday. The day before, students from Parkland, West Forsyth, Glenn, Atkins, and North Forsyth high schools had been there. 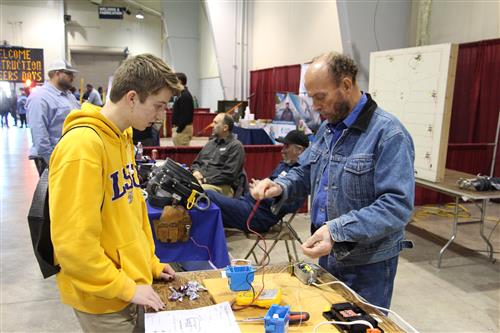 On Tuesday, Superintendent Angela Hairston dropped by, and the activities she participated in included working on a Habitat for Humanity house that students were invited to work on.  The house will be on Richard Allen Lane and is scheduled to be completed in January.

Some of the students who came to Construction Career Days participate in OCS (Occupational Course of Study) programs. One of the goals of OCS is to help students get ready for a job.

Kortney Tompkins, who is an OCS teacher at East Forsyth, said that learning about welding at an earlier Career Construction Days is what prompted him to pursue a career in welding.

Nancy Scarborough-Black is an OCS teacher at Mount Tabor, and, as her students were heading into the Education Building on Wednesday, she said, “We are truly hoping our kids can experience some jobs and learn the different skills it takes to do them.”

About the same time, Pat Glover, who teaches technology education, drafting, and engineering at East Forsyth, arrived with his students. This was the third time he had come to the event, he said, and students had had excellent experiences at the previous ones. 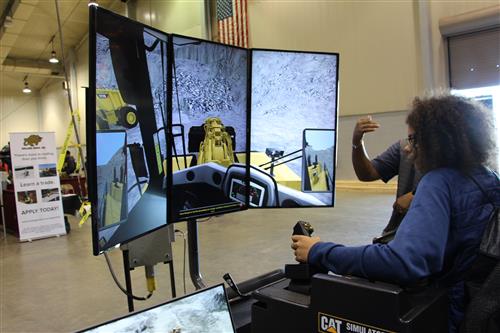 “My seniors have had the opportunity to meet with employers in industries they were interested in trying out,” he said.

And, after attending Career Construction Days, several of his students decided that they wanted to pursue a career in construction and took the step of enrolling in Forsyth Tech to pursue that goal.

“I think it’s a marvelous thing for the Chamber of Commerce and school system to do jointly,” Glover said.

Forsyth Tech had several stations set up, and, at one of them, David Ray, who is the Program Coordinator for Electrical Systems, was showing Mount Tabor freshman Ryan Bravo how such devices as a voltmeter worked.

Bravo already knows he wants pursue a career as a science teacher in middle school or high school. So, one day, he may be telling his students about what they can expect to experience at Career Construction Days. 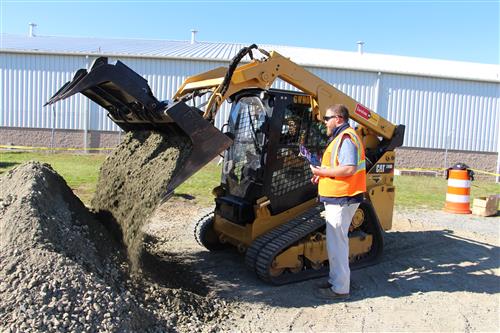 At one station, students were invited to place bricks in a frame in a pattern that you might use for a patio.

As she was doing it, said Mount Tabor junior Katherine Flores, the pattern made her think of a maze. It was fun, she said. And, with her planning a career as an architect, patios may be on the list of things she keeps in mind as she creates her designs.

Her friend Vanessa Lopez, who is a senior at Mount Tabor, also enjoyed the project.

Back outside, next to the mini excavator, other students were taking turns operating a skid steer, which also gave them the opportunity to scoop up crushed stone.

After his turn was done, Reynolds junior Tyrie Brown said that he wants to be a race car driver. He had had so much fun, though, that, if that doesn’t work out, he could see something in construction.