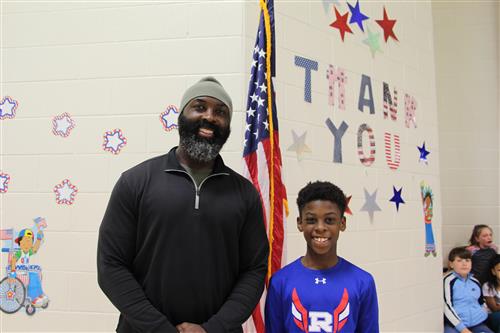 NOVEMBER 12, 2019 – During the Vietnam War, Terry Tucker served as a staff sergeant in the U.S. Air Force. These days, he drives one of the school buses that serve Caleb’s Creek Elementary.

Jason Campbell served as a specialist in the U.S. Army. These days, his son Joshua heads to Caleb’s Creek each school day as a third-grader.

Reginald Fair also served as a specialist in the U.S. Army. These days, his son Saxen is a fifth-grader at Caleb’s Creek.

On Friday, they were among 60 veterans – both men and women – with connections to Caleb’s Creek who came to the school to be recognized and honored for their service to our country. The program was organized by Renee Schoonover and the other members of the third-grade teaching team. 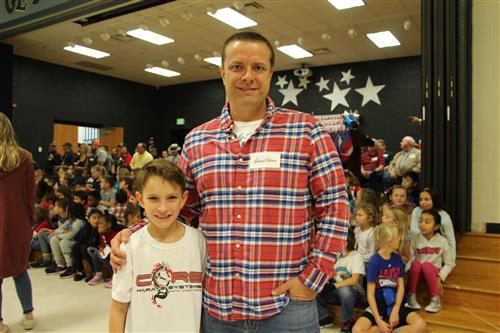 Third-graders were an integral part of the program. Some third-graders read short pieces about such topics as the history of Veterans Day and about what makes someone a hero. All of them sang.

At one point, each veteran stood up to be recognized. At the same time, the child that the veteran is related to stood. For each veteran, everyone clapped. Those who could not be there because they were stationed somewhere were also recognized.

A moment of silence served to honor veterans who had died, and Steve Picard, who is the president of the PTA, played “Taps” on his trumpet.

The veterans present were grateful for the recognition.

“I appreciated the kids understanding what serving your country is about,” Fair said.

“It’s great seeing my son and the other kids become aware and appreciative of the armed forces,” Campbell said.

“It really honored me,” Tucker said. “I appreciate the school system going this far and recognizing veterans.”

Schoonover said she hoped the program helped students realize that the community is filled with heroes who have served their country, and she hopes students show their respect for veterans throughout the year by saying, “Thank you for your service ” when they see a veteran. 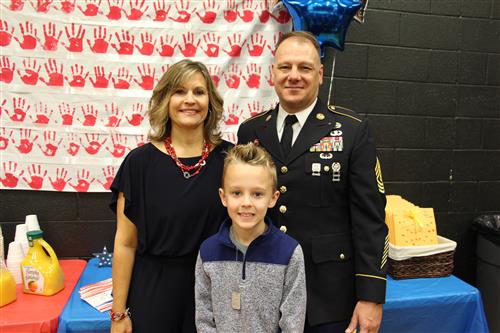 This is the sixth Veterans Day program that Schoonover has helped organize, and, as he has at previous programs, her husband, Sgt. Brian Schoonover, who was a First Sergeant when he retired from the Army, spoke to students.

Every veteran has a story and that story needs to be old so that people understand history, Brian Schoonover said before the program began.

One of Renee Schoonover’s students is Danny Pugh. Danny thinks it’s important to honor all veterans.

“They fought for my freedom so we should give them respect,” he said.

Another veteran on hand was C.R. Summerfield, who was a corporal in the Marines. He is now an officer with the Forsyth County Sheriff’s Department. 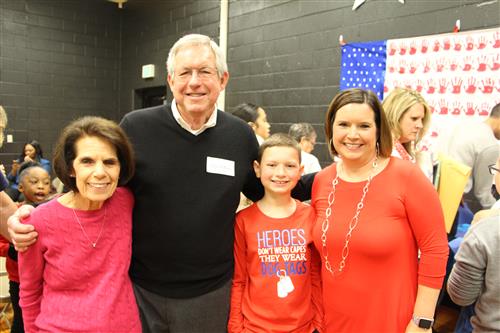 He, too, appreciated the ceremony.

And he liked that it gave the students a chance to interact with veterans in such a way.

Veteran Hector Mendez served two tours in Iraq in the Army and is still serving in the Army Reserves. His son Noah is in kindergarten.

“I feel proud that they organized this for us,” Mendez said. “It is an honor to serve my country.”

Another veteran there was Tommy Kinney, who served in the Army. His daughter Stephanie Marotz is one of the third-grade teachers who organized the ceremony. She was glad to be able to do it.

“It’s a way to give back to them for all they have done for us,” Marotz said, “and a way for kids to see what veterans should mean to them.” 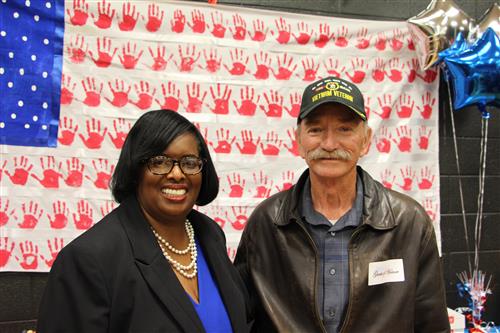 Over the years, Picard said later, he has been asked to play “Taps” at many events. He is happy to do so.

“It’s nice to be able to give back in another way,” he said.

Picard has been connected to Caleb’s Creek for 10 years now. His older daughter, Kayli, went there and is now a freshman at Atkins Academic & Technology High School. His younger daughter Maddison is now fifth-grader at Caleb’s Creek, so it will be the family’s last year at the school.

He is going to miss it.

“We love this school,” Picard said. “The teachers care so much for the kids.”

The third-grade teachers at Caleb’s Creek are: 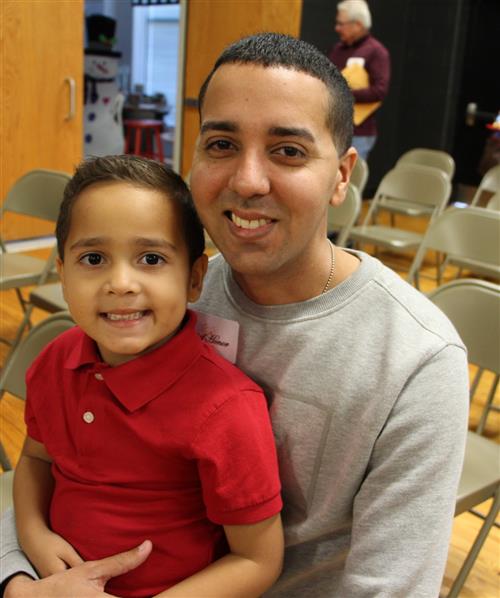