Note: On Thursday Nov. 21, Cathie Hayes had her surgery. All went well, and she went home that night. 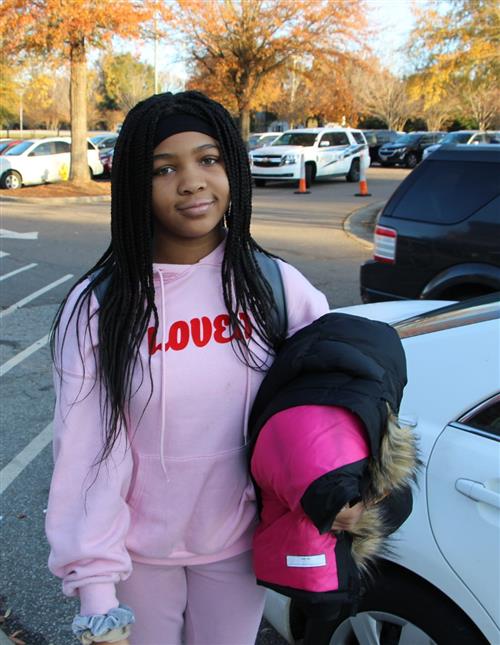 NOVEMBER 20, 2019 – It was only after Southeast seventh-grader Tiffany Woods dressed for school that she remembered that everyone had been invited to wear pink to show their support of Cathie Hayes – known to people throughout the building as Miss Cathie.

Tiffany wasn’t about to go to school not wearing pink.

“She said, “I have to change my clothes,’’ said her mother Veronica Fogle.

When her mother dropped her off on Wednesday Nov. 20, Tiffany was dressed all in pink.

Inside the building, teachers, secretaries, administrators and students were wearing pink, too.

Hayes, who has been the lead custodian at Southeast Middle since 2001, has breast cancer. Wednesday was her last day at work for a time. On Thursday, she will have surgery, and they were wearing pink it to show how much she means to them.

“She is Southeast Middle,” said Principal Stephanie Gentry. “I joke around and say she is in charge. She is the epitome of what Southeast is all about.”

Shortly after students arrived Wednesday morning, many of them gathered in one of the halls and had a teacher call Hayes to say there was a big mess. When she showed up to take care of it, they surprised her with Get Well cards that each of them had made for her. 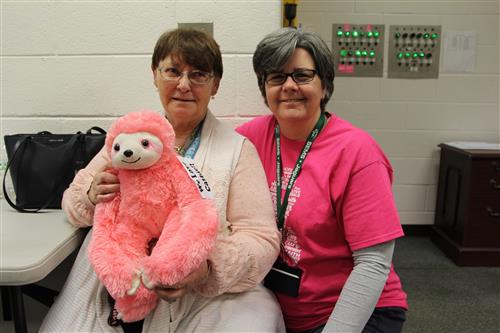 Asked how it made her feel, she said, “Overwhelmed.”

Later in the morning, Miss Cathie took a seat in the office, and, one person after another stopped by to tell her how much she means to them and to wish her the best as she heals.

Keeping her company were two stuffed pink sloths that Jill Whitaker, the lead secretary, had bought. Whitaker chose sloths because they have long arms – good for giving hugs. When kindergarten student Pheobe Croghan stopped by, she named one of them Pinkie.

“Cathie is so wonderful,” Whitaker said. She is like a momma and a grandma to everybody here.”

“I can’t say enough good things about her.”

When asked what makes Miss Cathie special, one person after another talked about how she’s like everyone’s mother or grandmother and how she goes far beyond her official job duties in taking care of people. 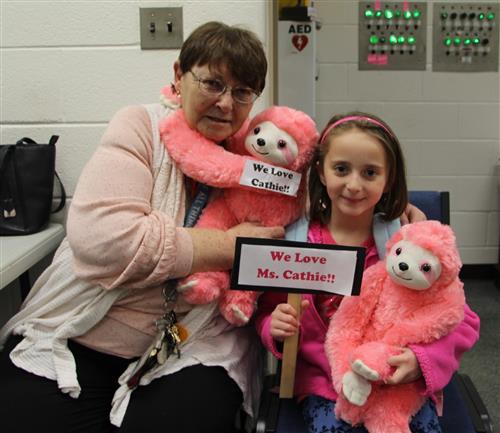 “She is so sweet, kind and caring,” said School Counselor Stacey Marshall Buie. “She is Momma of the school.”

Hayes is happy to do anything that people ask, people said, and she does nice things that people wouldn’t dream of asking her to do.

One morning, Vanessa Mills, who is a business education teacher, happened to mention to Hayes that she hadn’t had her coffee. The next thing Mills knew, Hayes had brewed a pot and brought her a cup of hot coffee.

“She is a loving and caring person,” Mills said.

“She goes out of her way,” said Pam Moore, who is an Exceptional Children (EC) teacher. “We love Miss Cathie.”

Some people already owned pink clothing – either because they like pink or they had bought pink clothes earlier to support people with breast cancer. That was the case with Jenny Watson, an FACS (Family and Consumer Sciences) teacher.

Standing in the hall with fellow teacher Dedria Davis-King, Watson said both have breast cancer survivors in their families. Miss Cathie keeps up with everyone’s family, they said, and she would regularly ask their family members were doing.

“She is so involved with everybody’s lives,” Watson said. 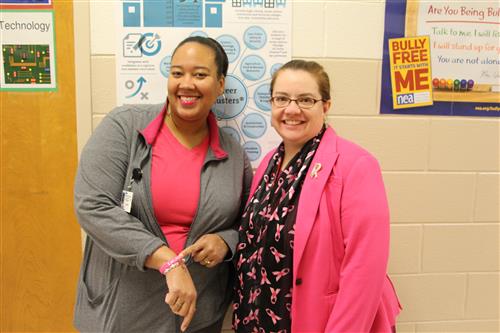 “I am pouring that back into her,” Davis-King said. “I keep telling her she will be fine. And she will be.”

Her care for everyone, Davis-King said, extends to dropping by and telling a teacher it’s time to go home if she thinks they are staying too late.

“She is our school mom,” Watson said.

Others picked up something pink just for the occasion. Assistant Principal Steve Kottenbrock was wearing a pink T-shirt that Gentry had given him. Like everyone else, he holds her in high regard.

“Cathie will do anything for you,” he said. “She is part of the Southeast Middle School family.”

Mary Barletto, who teaches eighth-grade English language arts, said that, in a real way, Miss Cathie is responsible for her coming to Southeast.

When Barletto first came to look at the school, she met Miss Cathie and immediately thought she was wonderful. Meeting her gave Barletto the sense that Southeast would be a good place to be. And it is. 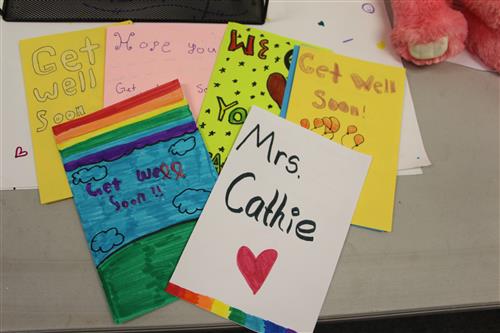 “All of the kids love her,” Barletto said.

Just seeing her ensures they behave in a positive way. If Miss Cathie walks by while a student is giving another student a hard time, the student instantly stops without her saying a word.

Miss Cathie is from Scotland. She came to the United States in 1962 to work as a nanny in New York. Over the years, her accent has softened considerably. It’s still there, though.

She is not the sort of person to do nothing, she said, and she continues to work in part to stay active. Mostly, though, it’s because she loves the world of Southeast Middle.

The adults are also great, she said. “It’s a good school.”

“This keeps you young.”

One of the people who came to the office to see Miss Cathie was Brooks Isacsson, who went to Southeast Middle and is now a freshman at Atkins. He wanted to say hello before heading on to Atkins. 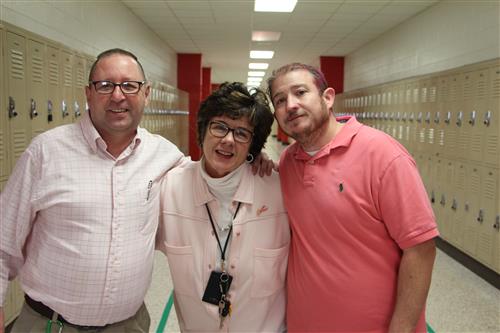 When seventh-graders Jaslyn Alvarez and Allison Arreguin came into the office, they picked up pink wrist bands that say “Miss Cathie” to wear for the rest of the day.

Someone in her family has dealt with breast cancer, Jaslyn said. “I know what she is going through. I will be praying for her.”

“I feel really bad for her,” Allison said. “She doesn’t deserve to go through this. She is a really nice lady.”

Tanner Herrin, who teaches eighth-grade English language arts, will be letting everyone know how Miss Cathie is doing. He’s taking a couple of days off to be with her at the hospital and while she is recovering.

Herrin has known her for years – she is good friends with his wife’s grandmother. The Herrins – Tanner and Danielle and their children Ally and Dylan – live downstairs from Miss Cathie, and whenever Ally, who is in kindergarten, and Dylan, who is in fourth grade, hear her come in, they run to see her.

She means a lot to Herrin as well. When he was growing up, his mother wasn’t around, and, in the years they have known each other, she had become a mother to him.

“She is a mother to me and a grandmother to my kids,” he said. “She is family.” 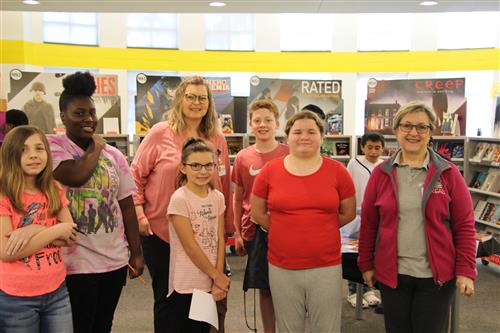 Wherever you were in the building, people were eager to say good things about Miss Cathie.

In the media center, Media Coordinator Lisa Turner, who has known her for 16 years, said, “We love Miss Cathie.”

“How could you not love Miss Cathie?” said Natalie Akashambatwa – Miss Aka to her sixth-graders.

“I don’t know anybody who doesn’t.”