A Behind-the-Scenes Tour of WXII 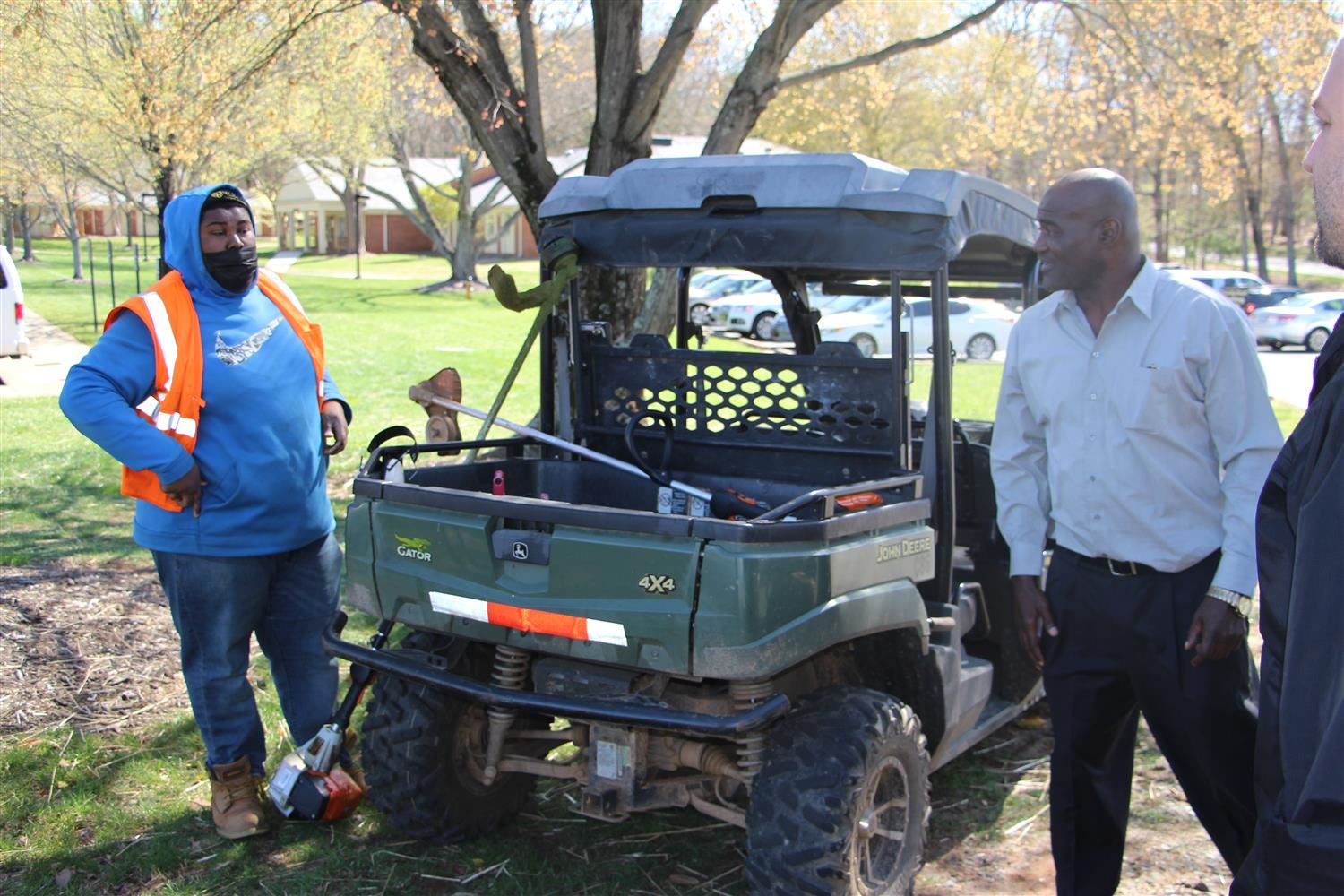 Before the morning of Nov. 21 was over, the students had watched the station’s general manager record editorials that will be broadcast in the coming days, stood behind the news desk and read from the teleprompter, and learned from a weathermen how a weather report is created and broadcast.

As a bonus treat, they learned first-hand that wearing green – or holding up a green sheet – while standing in front of the green screen makes parts of you invisible on the television monitor.

It was all quite enjoyable, the students said when it was time to head back to the bus that would take them back to school.

“It was fun and awesome to see a news station,” said Teshaun Poindexter. 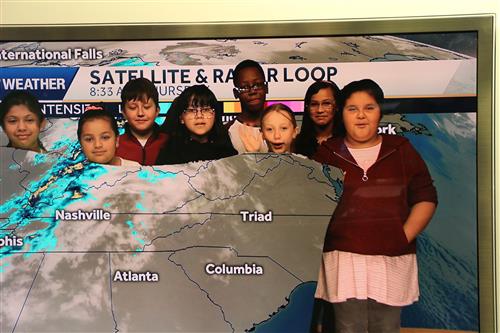 And a little weird, she said, because what is really going on in the studio is not the same as what you see on TV.

Juliana Dykstra had had a direct experience of that. While standing in front of the green screen while a weather map was showing on a monitor, she had the challenge of pointing out some of the cities being projected on the weather map.

By no means did the challenge diminish her overall experience, though.

“I thought it was really, really fun,” Juliana said.

Earlier, as Jolene Massic – the WXII receptionist who also serves as a tour guide – was waiting for everyone to arrive, she said she hoped the experience expanded the students’ horizons. 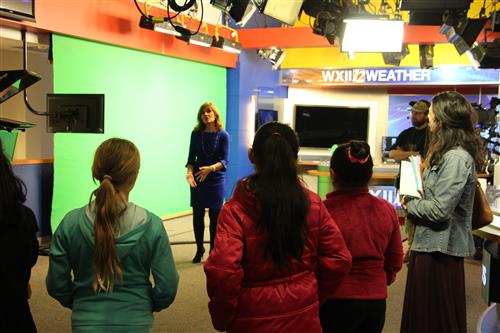 ‘We hope they see there are more jobs available here than just being in front of a camera,” Massic said. “It takes a lot of people behind the scenes.”

As it happens, Massic is a 1972 graduate of North Forsyth High. She joined the station after a career working for the towns of King and Rural Hall. When Massic asked the students what they were hoping to see after they gathered in the lobby, hands shot up.

The green screen, said another.

Valentine-Turner told Massic that meteorologist Brian Slocum had come to the school earlier and spoken to all fifth-graders. Slocum is known to be a fan of jokes, so Massic asked them what joke they had told him.

“What room does a ghost avoid?” 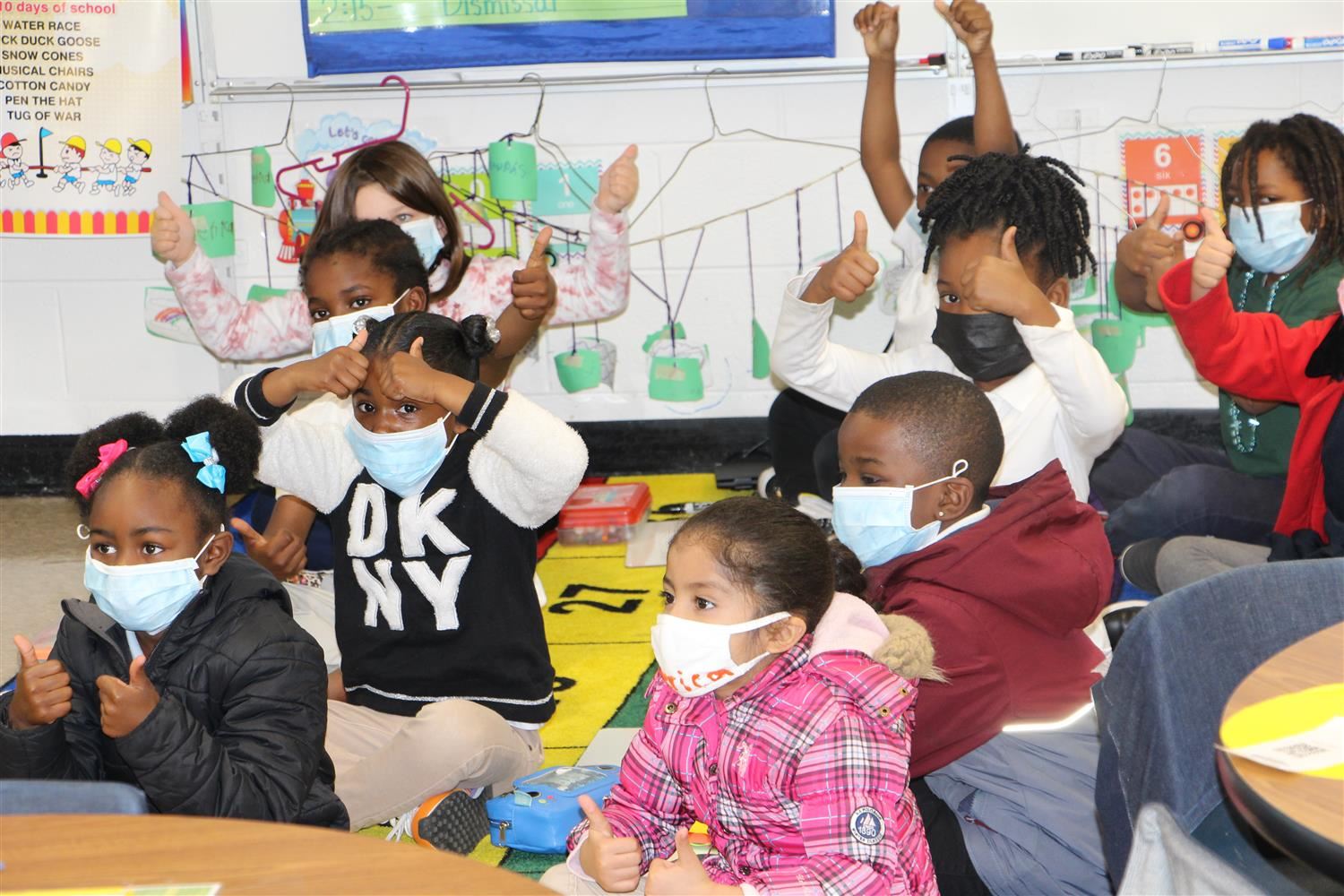 Before everyone headed into the studio, Kelly Lewis, who works in production for the station, joined the group. Depending on the day and time, his responsibilities include operating a camera and taking care of the logistics for a show.

As it happened, there was no break.

In any case, there was plenty see. When they gathered in the studio, Michelle Butt, who is the president and general manager of the station, was getting ready to record two editorials that will be broadcast in the coming days.

Before recording them, she talked with the students about the content of the editorials and the purpose for broadcasting them. One focuses on the people who work on Thanksgiving, such as police officers and firefighters, doctors, and nurses, and the importance of appreciating what they are doing for all of us. We should all be grateful that we have such people in our community, Butt said. 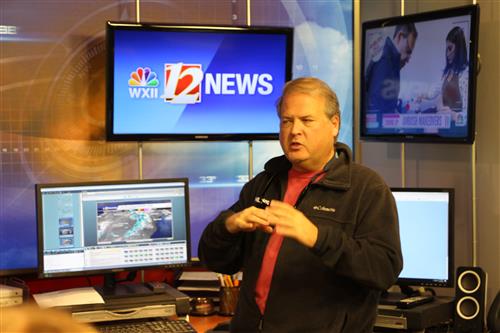 When it was time to record the editorials, Butt stood in front of the green screen while Michael Hansen, who also works in production, operated the camera. Looking at Butt on the monitor, she appeared to be standing by the WXII logo.

When it was time for the countdown to recording it, Butt said, “Five, four…” and then Hansen did “three, two, one…” silently with the fingers on one hand.

It took a couple of takes to get everything right. That was all her, Butt joked, because the students were certainly being as good as they could be.

Asked afterward what they thought of the experience of watching it all, Alison Garcia-Gonzalez said, “It was awesome.”

Butt stuck around to visit with the students for a bit, inviting each to talk about what they like to eat on Thanksgiving.

During the next phase of their tour, Lewis invited the students to stand behind the news desk. On the monitor, it looked as if they were the on-air celebrities. 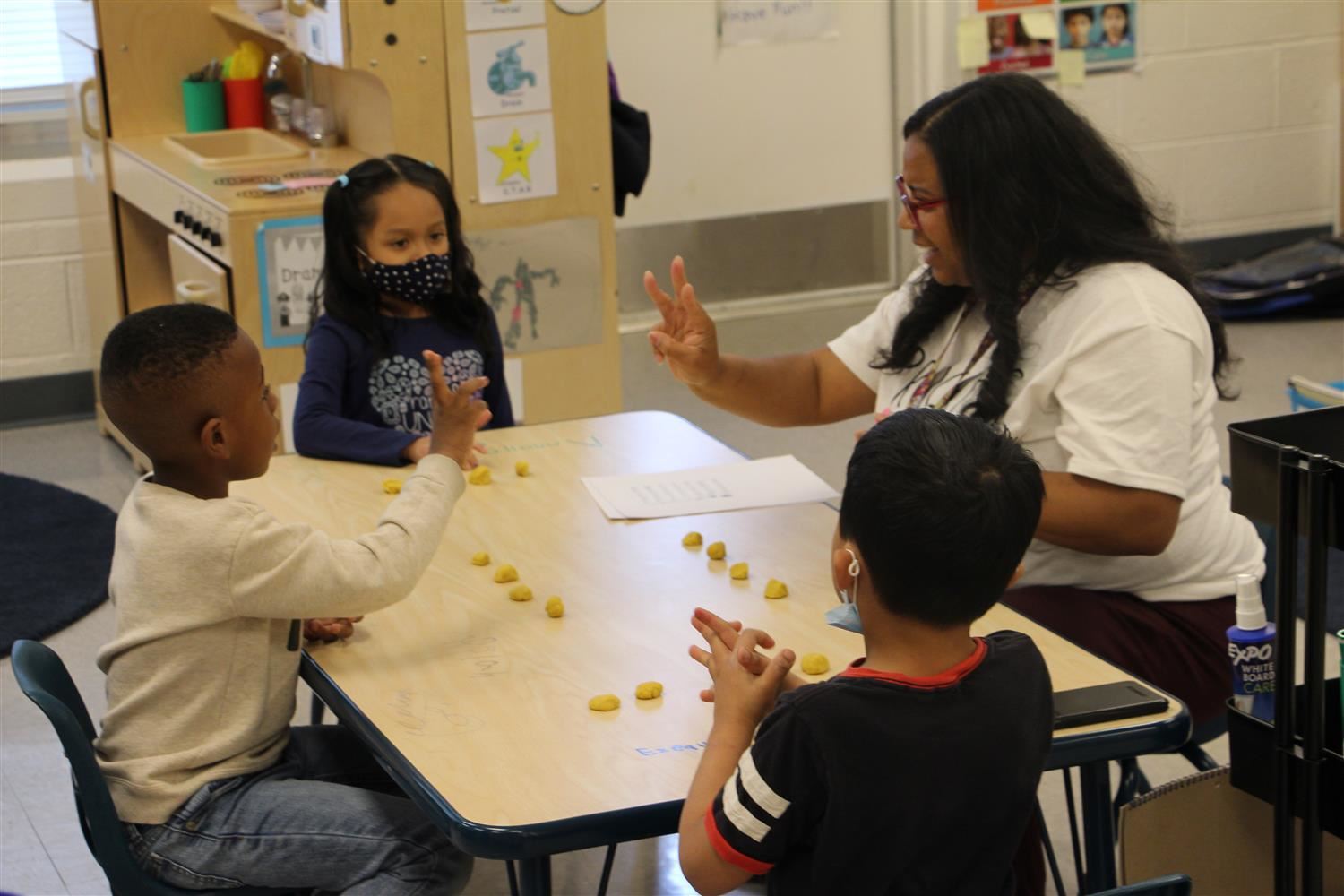 “I think that is just magical,” Valentine-Turner said.

Valentine-Turner had first seen such a scene a year ago, when the first group of Kernersville Elementary students toured WXII. That tour was made possible by someone who had won a behind-the scenes tour for 25 people gave it to the school as a gift.

After students came last year, Valentine-Turner said, the people at WXII said they would be happy to have students come each year.

These students were chosen from among those who applied for the privilege.

As this group of students took it all in, Lewis said, “It does look very different here than what you see on TV.”

When he asked whether anyone wanted to read news of the teleprompter, hands shot up.

Valentine-Turner noted that reading is important no matter what career you choose.

As Lewis and Hansen talked about their jobs, it came out that, on days when they have to be at the station at 4 a.m., they have to get up at 3 a.m. 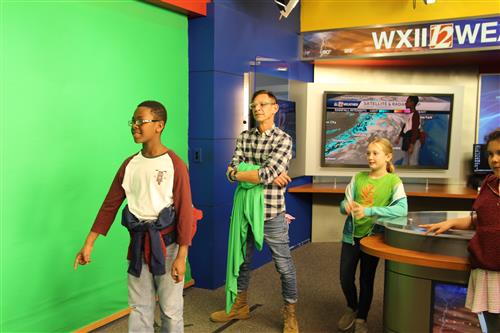 For a moment, that made going into TV a little less appealing for a couple of students.

The next stop was a visit with meteorologist Dave Aiken who took them through the process of writing and broadcasting a weather report, which requires learning to stand in front of the green screen and to use the monitor to point out this and that.

Because Juliana was wearing a green jacket, on the monitor she appeared to have no body.

For a fun finish, Lewis had everyone get in front of the green screen and hold a green sheet up. On the weather map on the monitor, it looked as if the country was covered by heads with no bodies.

The fifth-graders taking the tour were: 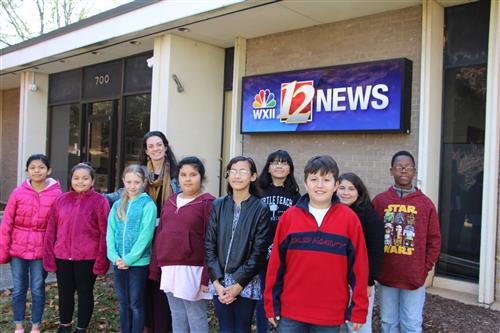