Inspiring Students to Pursue Their Dreams 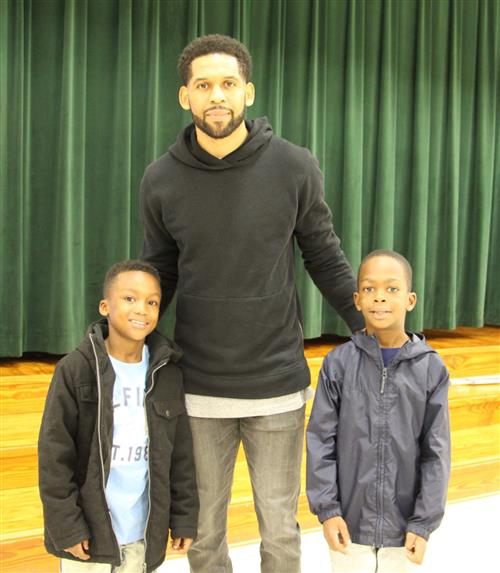 NOVEMBER 25, 2019 – Since growing up here, C.J. Harris has traveled the world playing professional basketball. Stops along the way include Europe and China.

Harris got started playing basketball when has 7.

“I haven’t stopped since,” he said.

After playing for YMCA teams while he was a student at Cash Elementary and Kernersville Middle, he headed to East Forsyth High where he played basketball for the high school team. After transferring to Mount Tabor High, he played there, too.

Harris was a gifted player, and after graduating from Mount Tabor in 2009, he headed to Wake Forest University on a basketball scholarship.

Growing up, he dreamed of becoming a professional basketball player one day, and those dreams came true after he graduated from Wake Forest in 2013 and headed to Europe to play for a German team.

On Friday Nov. 22, he came to Cook Literacy Model School to talk with students in third, fourth and fifth grade about the importance of hard work and education in making your dreams come true. 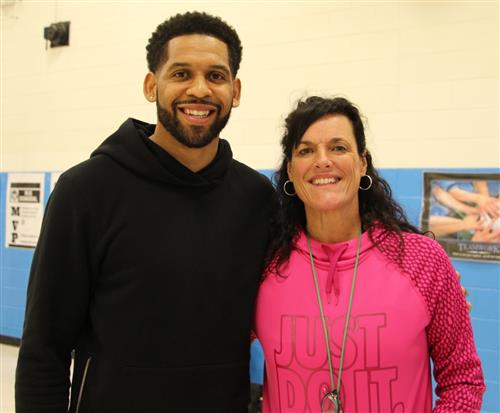 “I hope to inspire the kids,” Harris said. “If they see someone who has accomplished their hopes and dreams, maybe it will give them a little motivation.”

He also wanted to help students stay warm this winter. Harris brought hats and gloves to give to the students there to visit with him.

“Anything I can do to help,” he said.

Harris’ mother, Delores Harris, was there, too. Before going to work at N.C. Central University, she worked for Winston-Salem/Forsyth County Schools from 1995 to 2012.

Seeing the man her son has become makes her heart glad, she said. “The fact that he wants to give back to the community – I am ecstatic.”

Harris’ visit was arranged by James Staton, who is the Testing Coordinator at Cook. Assistant Principal Lynelle Williams was delighted that he was there.

“Giving back to the community is a wonderful thing for the kids to see,” Williams said. 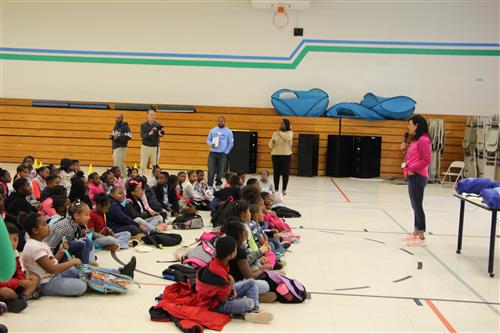 The day brought a bonus for Harris - a reunion with a former teacher. When Harris was at East Forsyth High, one of his teachers was Laura Kozlowski. She is now the health and physical education teacher at Cook, and, when she came in, they gave each other a hug.

“He was an amazing kid,” Kozlowski said. “He was always a leader and a role model in class.”

Once the third, fourth and fifth-graders gathered in the gym, Kozlowski introduced Harris to them.

“Boys and girls, we have an amazing surprise for you today,” she said.

After letting them know that he is from Winston-Salem just like they are, he encouraged them to pursue their dreams and talked about what they need to focus on along the way.

“When I was your age, I wanted to a professional basketball player,” he said. “You can accomplish anything and be anything you want to want to be when you grow up.”

He made a point about the importance of education by noting that, if he hadn’t worked hard in school, he would not have earned a scholarship.

A good education serves you in many other ways as well, he said. “The more you know, the better off you will be in life.”

In making points about personal traits that are important in life, he discovered that third-grader Melissa Johnson already knew a lot about integrity. When he asked students whether anyone knew what integrity means, Melissa told him that it means “doing the right thing when nobody is watching.”

Asked later how she knew about integrity, she said they have been studying it in class.

When Harris gave students a chance to ask questions, they learned that, these days, he plays professional basketball in China and that his favorite number is 11. That became his favorite number after it was assigned to him at Wake Forest, and, ever since, if it is available, he asks his team assign to him No. 11. 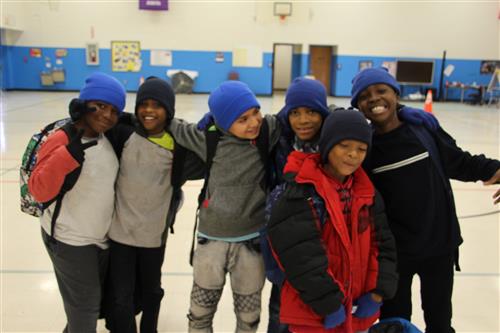 When someone asked whether he had ever quit something because it was hard, he said, “No.”

After everyone was done with questions, he and third-grader Courtney Morrison shot a few baskets for fun.

Students then divided into lines – boys in one line and girls in another – and Harris gave each student a hat and a pair of gloves.

Many students tried on the hats right away.

Then it was time to head back to class.

“The experience was good for the kids,” Staton said after they left. “They got to see and hear from a positive role model who's giving back to the community. They also heard from a person who graduated from a university, played the sport he loved while traveling the world.”

“It was an eye-opener for our students to see how you can accomplish your goals and travel the world. What we wanted our kids to get out of this particular visit was staying in grade school, going to college and following their dreams. And that, if you stick to whatever it is that you want to do and put in the hard work, it will pay off.” 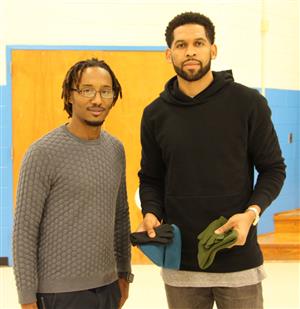 “We also wanted the kids here from someone that gives back to the community and how important it is!”