A Thanksgiving Celebration at Carver High 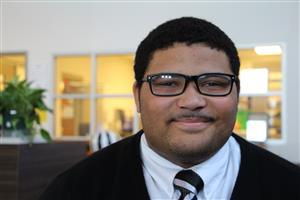 NOVEMBER 27, 2019 – When Deljew Harris came to Carver High as a freshman, Dewayne Tillman was the coordinator of the Academy of Hospitality & Tourism. When Tillman told Harris that he thought participating in the academy would be a valuable experience, he signed up.

Harris has indeed found it to be an enriching experience.

When Carver established an Academy of Information Technology, Harris began participating in that as well.

That, too, proved to be of great value.

Harris is now a senior, and he thinks that both academies have helped prepare him to succeed in life.

Through the Academy of Hospitality & Tourism, he has learned that hospitality is far more than just greeting people.

“It’s making people feel good,” he said. “You have make them feel better than when they walked in.” 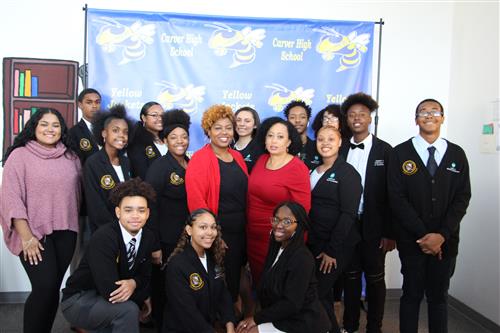 And he knows that becoming skilled in information technology will serve him well as he pursues a career in engineering.

When Harris heads off to college next year, he plans to focus not only on engineering but also on archeology.

“I like finding something old that is new to me,” Harris said.

Harris is one of many students who have been well-served by their experiences in the academies, and, on Tuesday, Nov. 26, Harris and the other students participating in one or both academies joined teachers, school administrators, family members, and representatives of community organizations that support the school for a Thanksgiving celebration.

As part of the celebration, community organizations recognized and honored a number of academy participants.

Principal Carol Montague-Davis said, in addition to showcasing what students are learning through the academies, the celebration gave parents and other family members the opportunity to see their children being honored. 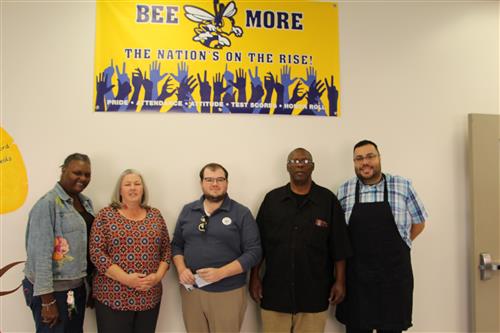 For the occasion, students and adults had transformed the media center at Carver High into a banquet room that brought to mind the dining room at some beach resort. The tables had elegant place settings, and the room was beautifully decorated.

Before the day was done, everyone would have gone down a buffet line filled with such Thanksgiving standards as ham, turkey, macaroni and cheese, green beans, sweet-potato casserole, and rolls. Pumpkin pie and other desserts also awaited them.

School Counselor Arnethia Brown, and Jana Minor-Oliver, who is the Coordinator for the Academy of Hospitality & Tourism, had taken charge of the cooking.

Brown said she was happy to do it.

“I just love cooking,” she said.

The members of Mount Pleasant United Methodist Church had not only provided turkeys and other food for the celebration, they had also put together 30 packages filled with turkeys and other Thanksgiving food that were being distributed to Carver families in need. 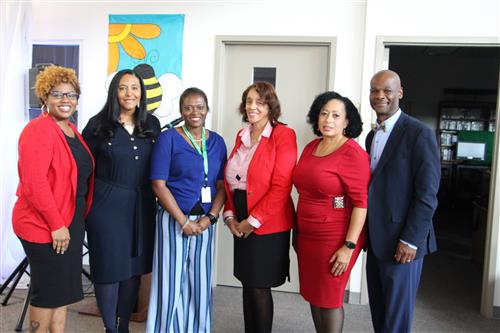 Church members had coordinated that with Javier Vega, the Parent Involvement Coordinator at Carver.

“That church helps us out a lot,” Vega said.

Four members of the church came to the celebration. When it was time for them to go through the line, Vega and students would be serving them.

Other community organizations had also supplied food and other support to the school for the celebration.

Along with recognizing outstanding students in the academy, said Tillman, who is now an Assistant Principal, the celebration could help members of the wider community learn more about the academies and the school’s JROTC program.

“We all work together,” Tillman said.

Johnai Myers is the Coordinator of the Academy of Information Technology.  Meisha Conrad is the Career Development Coordinator. 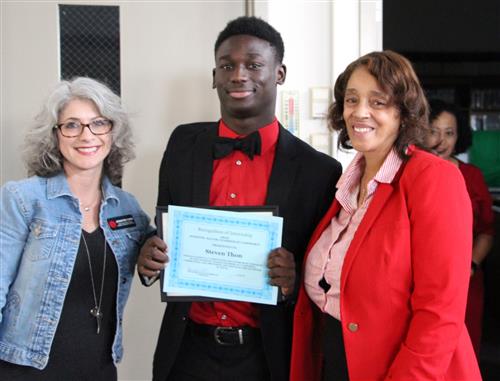 Guests at the celebration included two members of the Board of Education – Chair Malishai Woodbury and Vice Chair Barbara Burke – and representatives of such organizations as the Winston-Salem Chamber of Commerce, Forsyth Technical Community College, HanesBrands, and Herbalife.

Many academy participants had come in early to get everything ready. One of them was Asia Johnson, a junior participating in Academy of Hospitality & Tourism. She has learned a lot through the academy and plans to major in business when she goes to college.

Asked whether she has favorite Thanksgiving food, she said, it’s the macaroni and cheese that her grandmother makes.

After graduating from Carver, junior Arionna Ferguson plans to go to Winston-Salem State University and enter its nursing program.

“I like helping people and making sure people are OK,” Ferguson said. 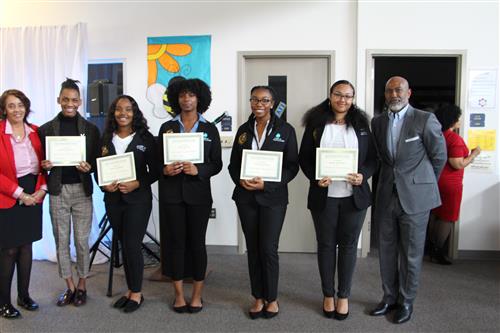 What she has learned about helping people through the academy will help her do that, she said.

Her favorite Thanksgiving treat is the pineapple upside-down cake that her grandfather would make not only for Thanksgiving but also for her birthday.

Junior Rasheed Barber has enjoyed what he has learned through the Academy of Hospitality & Tourism and going on field trips to businesses. After he graduates from college – N.C. Central University is at the top of his list – he wants to start his own business.

The list of possibilities is long, he said. One possibility is to sell T-shirts imprinted with art or images related to music. Both art and music are important to him. He is an artist and plays bass in the Carver Marching Band.

Two Carver students – senior Caleb Morrison and sophomore Breon James – had set up drums and a keyboard so they could play music while everyone enjoyed their food. For fun, Lead Secretary Jackie Coe came over and posed with them for a picture.

In a side room, the dancers who perform with the Carver Marching Band – which is under the leadership of Band Director Juan Eckard – were getting ready for their performance at the celebration. 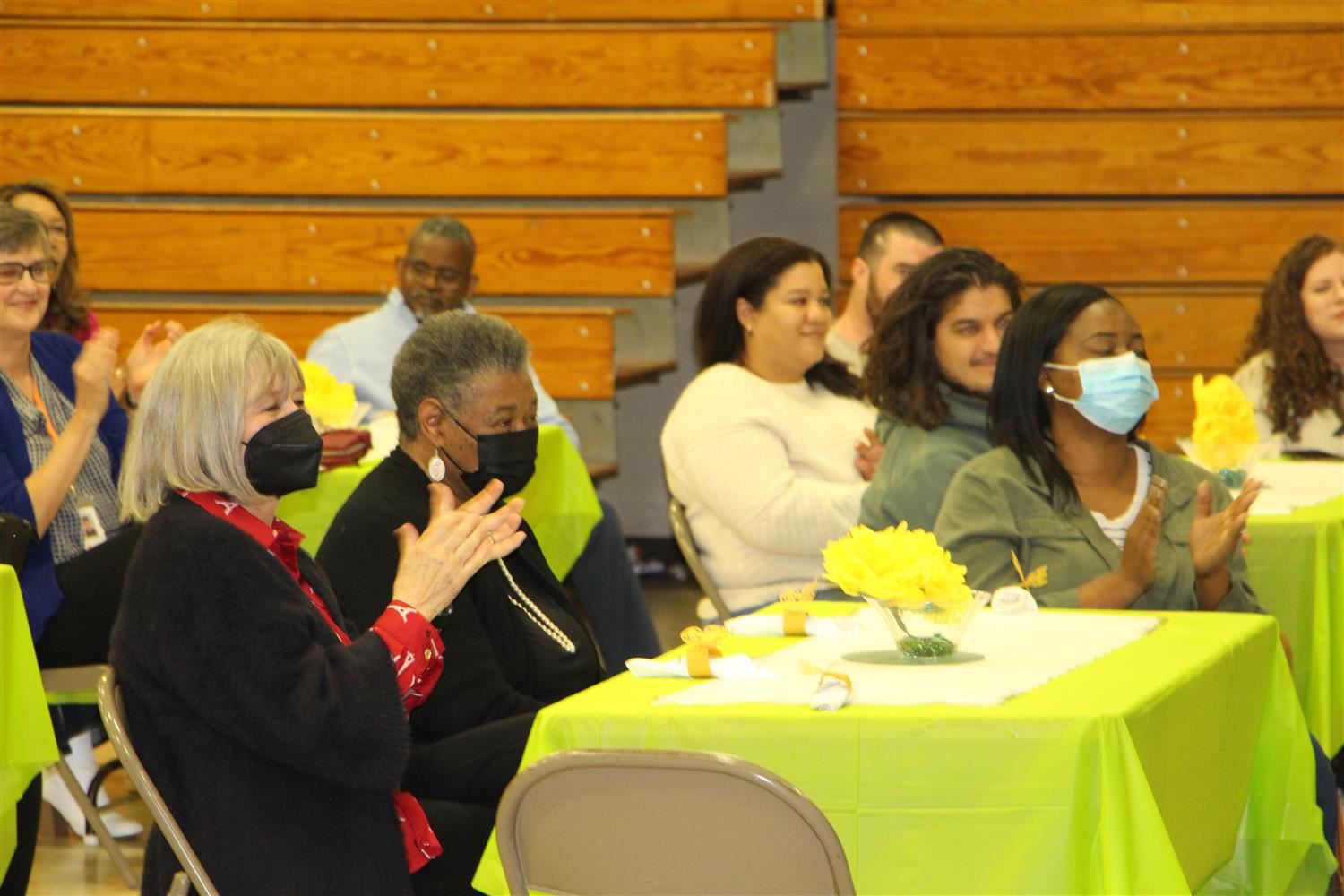 When it was time for the celebration to begin, Montague welcomed everyone.

“These students have worked so hard to put this event on,” she said.

And supporting those students are people on staff at Carver and in organizations throughout the community, she said.

As part of the program, Deljew Harris spoke about what he has learned through the academies, and academy participant Asli Perez Ayala sang.

After representatives from a number of community organizations recognized academy participants who have worked with them, Johnathan Stowe, who teaches math, gave the blessing.

And it was time for everyone to enjoy their Thanksgiving meal.