A Cornucopia of Books for Students at Moore 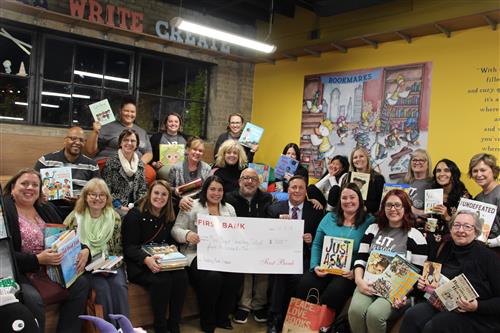 DECEMBER 4, 2019 – With shelves filled with books written to take readers on adventures in knowledge and imagination, a bookstore can have a feel a bit magical on any day.

On a day when – thanks to a generous gift from First Bank – the aisles are filled with teachers shopping for books they hope will excite their students, the sense of being in a magical place is so intense as to feel almost tangible.

People who love reading filling their arms with books to help students become comfortable and avid readers, oh my!

That was the case on Tuesday, Dec. 3 when every teacher at Moore Elementary had the opportunity to come to Bookmarks Bookstore and – thanks to a $5,000 gift from First Bank - buy $150 worth of books for each of their classrooms.

Wait, there’s more. Thanks to Bookmarks offering a 20-percent discount, they could buy even more books, and thanks to Footnote Café – which shares the building with Bookmarks – offering free coffee, hot chocolate and snacks, they could take a refreshing break whenever they liked. 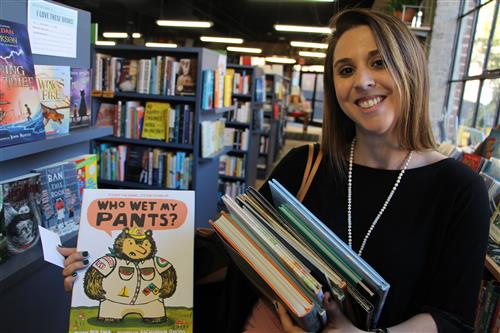 Principal Sean Gaillard and Magnet Coordinator Yvonne Leab said that, in addition to the experience giving teachers the opportunity to inspire their students to read more, they hoped, as an important fringe benefit, it would help students appreciate that members of the wider community are supporting them.

Teachers came to the bookstore – which is off Fourth Street in downtown Winston-Salem – after school got out for the day.

One of the first teachers there was kindergarten teacher Samantha Moyer. She needed to get her shopping done relatively quickly because she’s working on a master’s degree in Reading Education at Appalachian State and was heading to a class at the university’s Academy at Middle Fork.

With Black History Month coming in February, Moyer wanted to include some books on black history. She also picked out some just-for-fun books.

“You always have to go with goofy ones for kindergarten,” Moyer said.

Moyer loves to read. She likes immersing herself in a book and getting lost in the story, and she likes finding ways of inviting her students to join her.

“I love sharing my love of reading with them,” she said.

One of the books she picked out was A Big Mooncake with Little Star by Grace Lin.

Leab picked up a copy of The Crossover, which tells the story of a young basketball player. It’s one in a series of graphic novels that Kwame Alexander created, in part, to entice reluctant readers.

Leab had read all the other books in the series but not this one. So she was looking forward to joining students in reading it.

Leab was one of several people from Moore who brought along their children. Her daughter, Isabella, who is in the seventh grade at Jefferson Middle, and son, Joseph, who is in the fourth grade at Moore, were there.

Asked what it’s like to be at the same school as his mother, he said it can feel a little odd sometimes. “But I still like it.”

Joseph enjoys going on exciting adventures in books. At the moment, he is reading Wildfire, a book about a boy who is at camp when wildfires break out.

One of Joseph’s teacher buddies at Moore is Julie Ary, who teaches fourth grade. She was creating a book sampler by picking out books in different genres, books representing different cultures, and such.

On her own time, Ary likes reading books such as The Hunger Games.

Christi Barnes, the specialist who oversees the Multiple Intelligences lab at the school, brought along her daughter, Francie, who is in the fourth grade at Moore.

Barnes was delighted to be there. Anytime you get a chance to pick out new books for students, she said, it’s great.

Along with Francie, Barnes has two sons – Wilson, who is in the eighth grade and Jack, who is in the seventh grade. When Barnes was growing up, her parents read with her every night. That meant a lot of her, and, now she does the same with her children.

“We read the entire series of Narnia as a family,” she said.

At the end of the teachers’ shopping spree, the people at First Bank were going to present a $5,000 ceremonial check to Gaillard and everyone else. 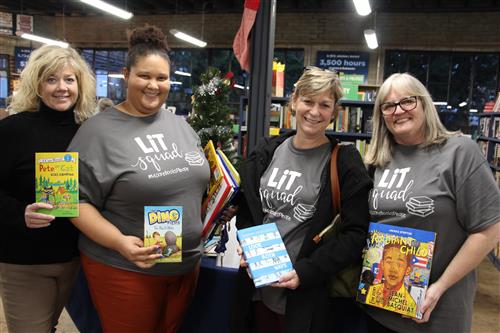 On hand to do that were Gray Barbour, a First Bank Market Executive, and Bianca Marti-Johnson, the Branch Manager for the Knollwood branch, which is just down Knollwood Street from Moore.

“First Bank believes that, as a community bank, we have a responsibility to our community,” Marti-Johnson said.

When members of the committee charged with finding ways to do that, started considering possibilities, she said, they agreed “they greatest impact we could make would be through education.”

First Bank wants to be part of the solution, Barbour said, and enabling Moore teachers to buy books for students is a great way to do that.

“This is tangible,” Barbour said.

Moore already had strong connections with both Bookmarks and Footnote Café. Heidi Schwartz manages the café, and her son, Shelton, is in the third grade at Moore.

Her mother and Shelton’s grandmother, Bonnie Fogg, was also there. Fogg worked for the school system’s Finance Department for many years. Since officially retiring in 2010, she has continued to fill in as needed in Finance and as a substitute in schools. 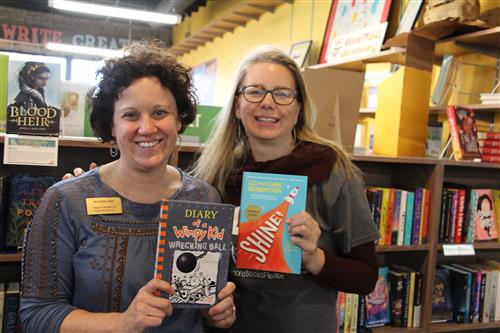 And, when it comes to homework, Parris is crafty. She regularly creates what she calls a Family Playlist – a project for students to do at home with their families.

“The kids are going home and teaching their parents,” Parris said.

The projects are lots of fun, Hendricks said. “She has convinced him it’s not homework…He has no idea how much he is learning.”

In case teachers were looking for ideas, Hendricks and others at Bookmarks had set up a table with stacks of books for each grade level.

As Gaillard was poking around elsewhere, he pulled a couple of books in the Who Is...? series off a rotating book rack. 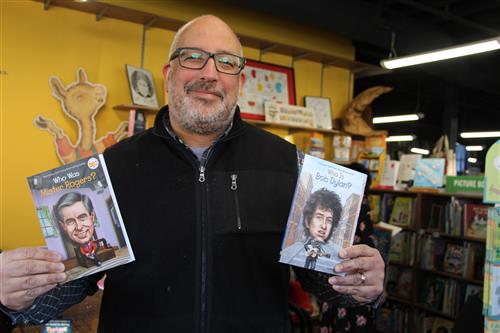 A fan of Fred Rogers and Bob Dylan, he chose Who Is Bob Dylan? and Who Was Fred Rogers? And, yes, he has seen the new Tom Hanks movie about Fred Rogers. He liked it so much he saw it twice.

Fifth-grade teacher Renee Stephen had asked her students to suggest some books and she came armed with hand-written notes from them.

“They made some really good picks,” Stephen said.

As teachers were shopping for books, they would keep an informal tally of the total one way or another – in their heads, on their phones.

“I am somewhere in the vicinity,” said fifth-grade teacher Kimberly Ashton as she was waiting to check out.

In addition to all the reading she does with her students, Ashton makes sure to do a lot of reading on her own – mystery, historical fiction. To pull that off, she sometimes starts her reading day at 5 a.m. 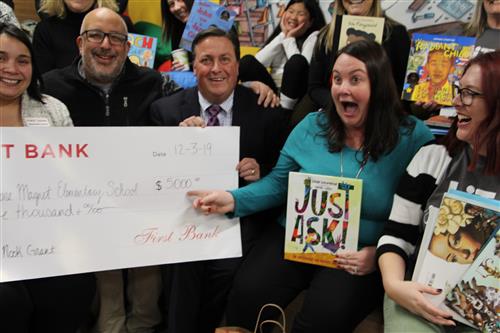 When teachers checked out, many discovered that they had not yet reached $150 so they could go back for another book or two.

As Barbour and Marti-Johnson visited with teachers, the teachers showed them some of their selections.

When it was time for everyone still there to gather for the presentation of the check, third-grade teacher Lindsay Jacobo did a fun pose to illustrate just how excited the people at Moore were about the gift.

Barbour talked about how much he appreciates what everyone at Moore is doing for students.

“Thank you so much for what you do,” he said.

And Marti-Johnson talked about how exciting it was be introduced to so many books that were new to her.

“I want to read all these books,” she said.