Taking a Pie in the Face for the Kids 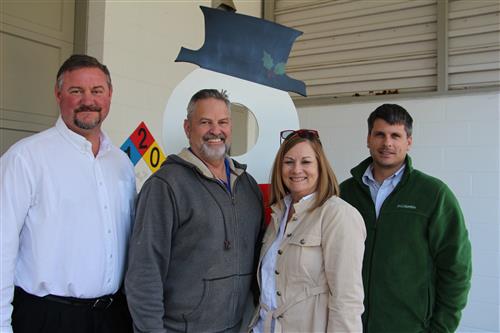 DECEMBER 16, 2019 – This is a holiday story about how being willing to take a pie in the face means more toys for children in need.

One day, Nanette Naylor had a brilliant idea:

If Brent Teague, the Executive Director of Maintenance, would be willing to take a pie in the face from someone who contributed a toy or money to the Toy Drive that Naylor – who is the Office Manager for the Maintenance Division – and others organize, she bet even more people would participate this year.

When she asked Teague whether he would be willing to do that, he said, “Sure.”

They, too, agreed to participate.

Now, Daryl Sgroi, the Director of Facilities, Warehouse & Distribution Services, is a guy who thoroughly enjoys joking around. So his story is that, when he was asked whether he would also like to participate, he said that he had no time for reindeer games.

Yet when it was time to find out who would be throwing a pie in whose face on the afternoon of Thursday, Dec. 12, there Sgroi was, along with the other three, outside one of the maintenance buildings.

Those who joined Naylor in organizing the drive included administrative assistants Debbie Clinard, Cameron Harden, and Valerie Bolton. Clinard took on the additional responsibility of turning donated money into toys.

On the big day, they had set up a display with some of the toys that would be distributed through Head Start Family Services. Even more toys were waiting elsewhere.

“We are real proud of our success,” Clinard said. 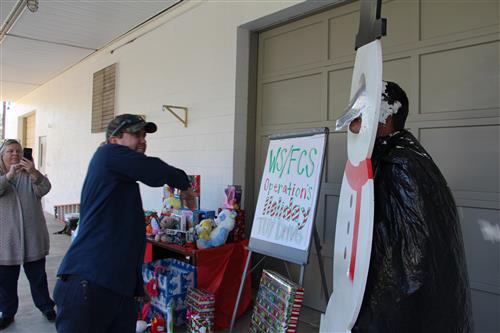 Set up behind Frosty was a wooden box that anyone who needed a boost could stand on.

As everyone was gathering, those who would be taking a pie in the face chatted a bit about this and that. Although none of them had ever taken a pie in the face, not one was worried about it.

Teague said he was happy to be participating.

“It’s for a good cause,” he said. “This is the most participation we have ever had in the toy drive.” 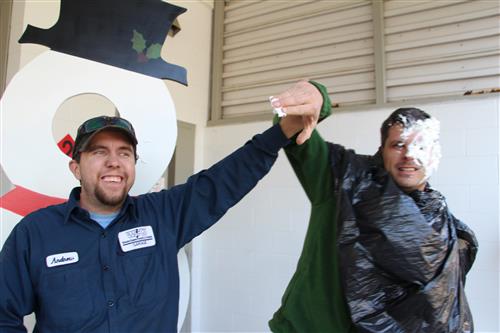 Asked about a favorite toy, Teague said that, of all the toys he received growing up, the ones that brought him the most satisfaction over time were Legos. Like everyone else who has ever lived in a house with Legos knows, he knows just how painful it can be to accidently step on a Lego you didn’t see.

Kennedy was looking forward to the holiday season even more than usual this year because her daughter is arriving from California on Dec. 23 and staying for a week.

Sgroi enjoys the time with family and the food that the holiday season brings. On Christmas Eve, he fixes a ham.

Those who had organized it all were also looking forward to the holidays.

Not everyone who had bought a toy or donated could make it to the big event, but, as the time approached, those could gathered. 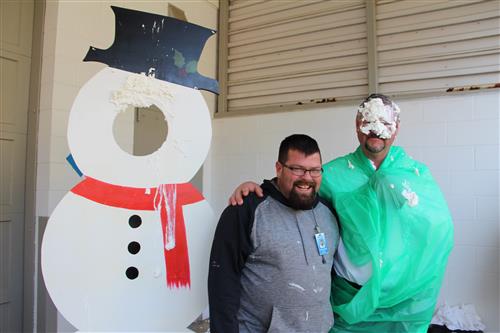 As it turned out, those who weren’t able to make it missed some amusing expressions as the pie-in-the-face recipients scrunched up their faces and dealt with whipped cream that scattered hither and yon.

Justin Dyson was first up.

Everyone who had contributed had received a double ticket, with one half going into a plastic bag with the supervisor’s name on it. The first ticket drawn belonged to Andrew Cates Ingram, who works in Maintenance.

He came up and threw his pie straight into Dyson’s face.

How did it feel?

“It was interesting,” Cates said.

Asked what he thought of the experience, Dyson said, “It was tasty.”

Next up was Brent Teague. 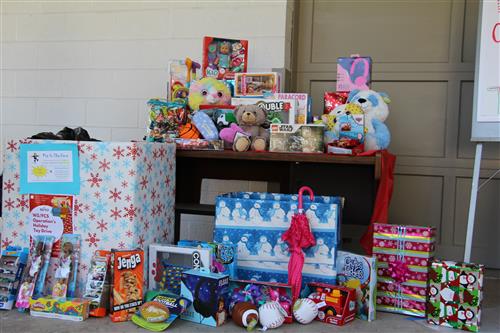 The pie-throwing honors went to Craige Ingram, who works in the Paint Department.

“Feels good,” he said afterward, adding that he wouldn’t mind doing it again.

Teague said, “creamy” as he sampled a bit of the whipped cream.

Next up was Daryl Sgroi. Marshall Sykes, who works in the Warehouse, delivered that pie.

And indeed it was.