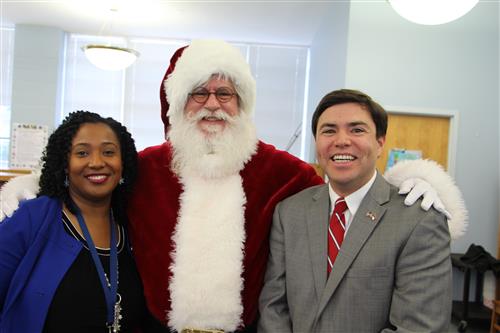 DECEMBER 16, 2019 – Thanks to a special invite from the N.C. State Superintendent, Santa Claus dropped by Cook Literacy Model School.

On the morning of Monday, Dec. 16, State Superintendent Mark Johnson and Santa visited with kindergarten students in the media center. Along with good cheer, Santa brought books – two for each student – for the kindergarteners to take home and keep.

“Anytime you can get books into students’ hands and promote a love of reading, it’s the right thing to do,” Wilkins said. “We are grateful Mr. Johnson has selected Cook to benefit from getting holiday books.”

Johnson and others from the N.C. Department of Public Instruction came to Winston-Salem from Raleigh just for the visit to Cook. 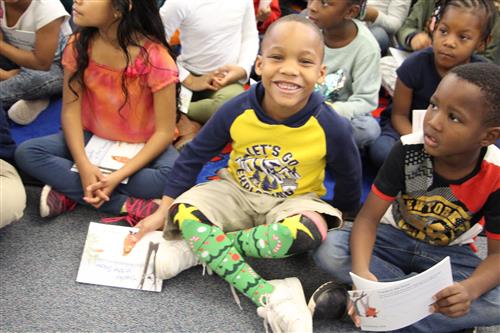 “We’re here to bring a little holiday joy,” Johnson said as he was waiting for the 50 or so kindergarten students to come into the media center.

Last year, after the devastation caused by Hurricane Florence, Johnson headed to Wilmington with books for students. Seeing what a positive affect that had on students, he decided he wanted to bring more books to students in other cities this school year.

As kindergarten teacher Shonette Lewis – who was decked out in holiday reindeer antlers – was bringing in her students, she said that the opportunity to read more holiday stories adds to the spirit of the holiday.

In class, they had been reading There Was an Old Lady Who Swallowed a Bell!, she said, and the students were thoroughly enjoying it.

Wanting to join in on all the fun, school board members Dana Caudill Jones and Marilyn Parker and Instructional Superintendent Lionel Kato had come to Cook for Santa’s visit.

The students had no idea that Santa was on his way, and, for a time, the kindergarten students simply visited with Wilkins and Johnson, who talked about some of the books his children enjoy, such as The Ninjabread Man. For those who aren’t familiar with it, it’s a takeoff on the classic “Gingerbread Man” story. 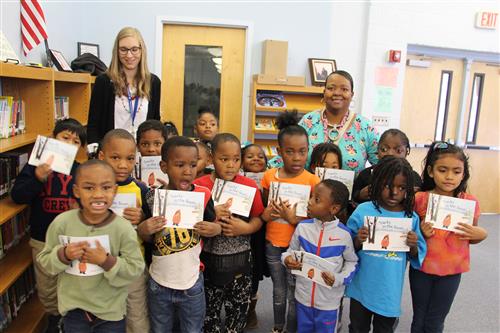 When Johnson got the word that Santa was ready, he asked the students “Who likes Santa?”

Every hand shot up!

And then there Santa was.

After visiting with the students for a bit – he even offered to let a student tug on his beard – Santa+ said, “My elves brought something for me to give you this morning.”

Then he and Johnson passed out copies of Tracks in the Snow by Wong Herbert Yee. In it, a girl follows tracks in the snow to find out who made them.

Johnson then showed them copies of the second book they would receive once they returned to their classrooms. By Ezra Jack Keats, The Snowy Day tells the story of a boy waking up and discovering that snow has fallen during the night.

When it was time for everyone to head back to their classrooms, Santa took a seat by the door so students could give him a hug on the way out. 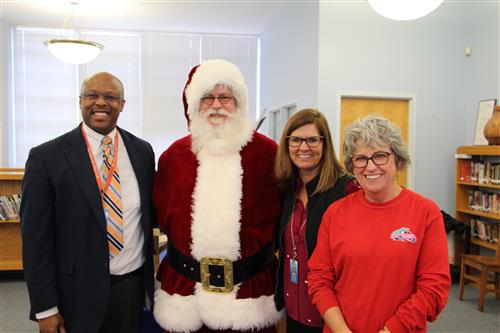