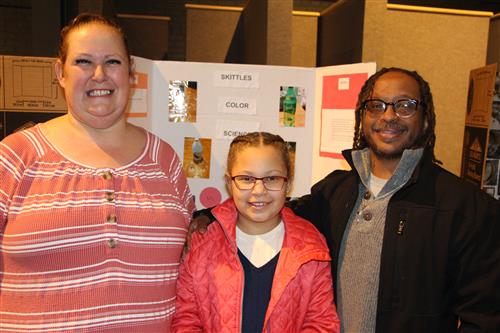 JANUARY 13, 2020 – Third-grader Makayla Penn likes science so much she already knows she wants to become a science teacher one day.

So, when the time came to create a science fair project at Ibraham Elementary, Makayla was excited.

Makayla also likes Skittles. So she thought it would be fun to come up with a project that used them. With her “Skittles Color Science” project, she did experiments to determine whether bleach, vinegar, rubbing alcohol, water or Sprite would remove the color from a Skittle the fastest.

She thought it would be bleach. Turned out it was Sprite.

Her project won at the Ibraham science fair. So, on Jan. 9, Makayla and her parents – Frank Penn and Shasta Richards – headed to Kaleideum North for the annual Winston-Salem/Forsyth County District Elementary Science Fair. 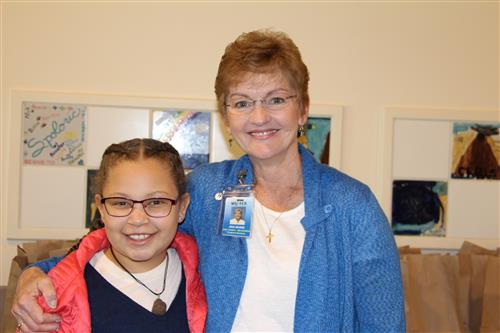 For Makayla, being at the science fair brought the bonus the chance to visit with Iris Mudd, a former science teacher who now serves as the district’s Middle School Science Coach.

Blair Wallace is in the second grade at Vienna Elementary. She and the other members of her family like strawberries. So they hate to find that one has gone bad. So Blair came up with a project called “Save the Strawberry” that explored ways to minimize strawberries going bad.

For her project, Blair experimented with using different types of containers and with storing them in different parts of the refrigerator. She had a lot of fun keeping track of how the strawberries were doing. Her project placed first in the kindergarten through second grade category.

Blair is thinking about becoming a dance teacher when she grows up. Her mother, Amy Wallace, knows that whatever Blair does, she will do it well.

“She is very determined,” her mother said. “She is a hard worker and has some good stick-to-it-iveness.” 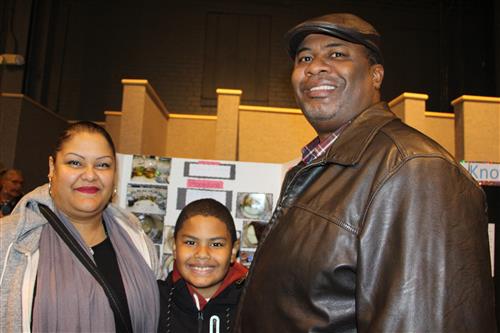 For his project, Ethan Cason, who is in the fourth grade at Gibson Elementary, also used a fruit he likes. Ethan is fond of apples – yes, he does eat an apple every day, and, yes, he does think apples help to keep the doctor away.

For his “Aging an Apple” project, he documented what happened to slices of apple that were stored in different ways and in different places – outside, in the fridge, on the kitchen counter – to see what would happen.

He did it for a month, and, no, he didn’t eat any of the month-old slices.

His parents – Alex and Marilyn Cason – came to the district fair to cheer him on.

“He is the sweetest guy,” said his mother. “He is thoughtful. He cares about people – that is the most important thing.”

“He very much cares about people,” his father said.

Ethan said his caring attitude came from both of his parents. 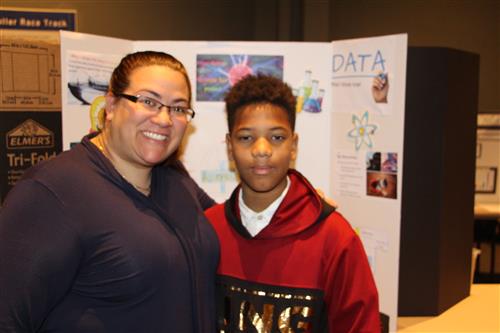 Amir Wallace, who is in the fifth grade at Ashley Academy, came with teacher Cara Kusnic, who is a scientist specialist at Ashley.

For his project – “Liquid Matter” – Amir decided to look at materials that degrade rubber. He discovered that vinegar can be especially aggressive.

Amir knows he wants to pursue a career in science – most likely something connected to the ocean.

Whatever path in science he pursues, Kusnic knows that he has the gifts to do well.

“Amir is brilliant,” she said. “He is a good, well-rounded kid.”

And he takes corrective feedback in stride.

“He is somebody who is going to make our future way better,” Kusnic said. “He is going to go very far in life.”

Marcus A. Harshaw, the Kaleideum’s Vice President for Learning & Facilities, said they were happy to serve as hosts for the fair.

“Kaleideum is thrilled to support any initiative that encourages students to do science well!” Harshaw said. 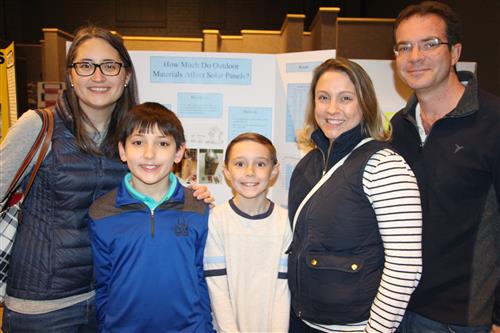 “We embrace our role in supporting the WS/FCS science fair because It demonstrates how we can work together in our local STEM ecosystem.”

David DeLade, who is the Director of K-12 Science, said that, this year, more students focused on engineering projects and on projects with real-world applications.

That was certainly the case with the first student to arrive – Patrick Gross, who is in the fourth grade at Meadowlark Elementary.

He thinks it’s important for everyone to do what they can to combat global warming. One way to do that it to replace fossil fuels with solar panels.

“Solar panels are a way to fix global warming as a problem,” Patrick said.

It’s important that the panels function as efficiently as possible, so Patrick and his school mate and friend – Hunter Shelburne – created a project that looked at materials – sand, dirt, leaves, water – impede the functioning of solar panels. 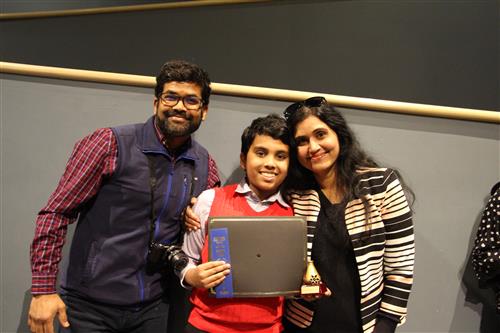 They discovered that the dirt they used – which had a lot of clay particles in it – most seriously reduced the electricity produced by a solar panel.

Patrick’s parents – Michael and Jessica Gross – were there with him. His mother thinks of Patrick as an 8-year-old in a 10-year-old’s body.

“He is very mature for his age,” she said.

“He is a sponge, too,” his father said. “He picks up things quick and pays attention to what people say.’

A bit later, Hunter arrived with his mother, Jamie Shelburne.

Hunter always wants to know more, she said. “He asks a lot of questions.”

Soil can also be a powerful tool. Fifth-grader Rachit Chandrakul wants to help people who are less fortunate, and, one way to do that, he thought, would be to find new sources of electrical power.

“There are many people in the world who don’t have electricity,” he said. 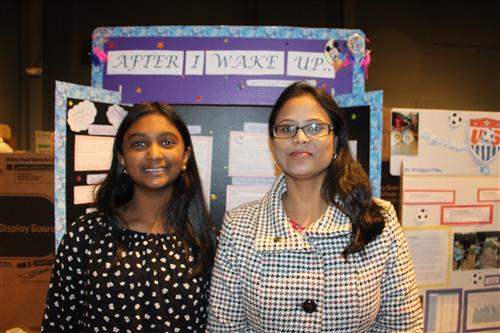 Looking into possibilities for providing electricity led him to soil.

“I thought soil could be used to generate electricity,” he said.

As he did experiments, he learned that indeed it could. All six types of soil he tested provided some electricity. Dry sand provided the least amount. Acidic soil provided the most.

So, for his science fair project at Jefferson Elementary, he created a prototype for a battery that used acidic soil.

As he was setting up, Ratchit said he would like to win but. If he didn’t, though, that would be fine. What matters, he said, is doing your best, and he knew that he had done his best.

As it happened, doing his best meant that his parents Gauri Kulkarni and Prafulla Chandra had the joy of seeing his project – “Soil Electricity: Giving Power to the Powerless” – win first place in the category for grades three through five.

Second place in that category went to Veda Sanka, who is in the fifth grade at Brunson Elementary. 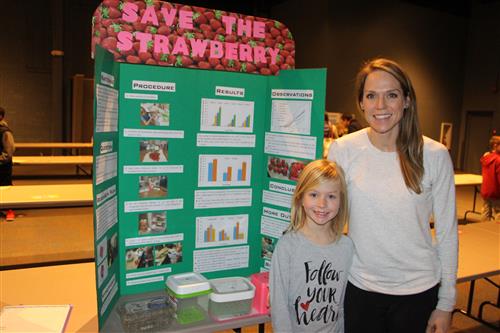 Her project was called “After I Wake Up…Can I Recall my Dreams?”

She put an incredible amount of work into finding the answer. She enlisted 30 people – friends, neighbors, people who work with her mother – and had them keep track of how much they slept each night and whether they remembered any dreams.

When she started out, she thought that people who sleep more would be less likely to remember their dreams.

“I was proven wrong,” Veda said. 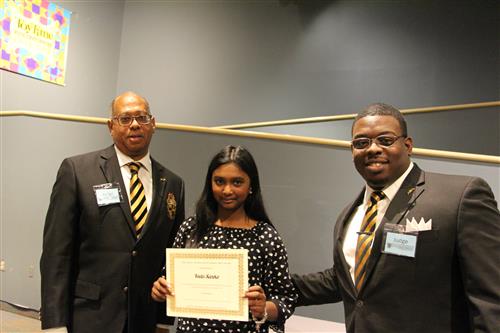 And soon after that her dream came true.

Although she hadn’t had a dream about winning at the District Elementary Science Fair, her mother Shilpa Botu had the sort of dreams that parents have for their children.

After Veda won, her mother said, “It’s like a dream come true again.”

The winners in third grade through fifth grade category were: 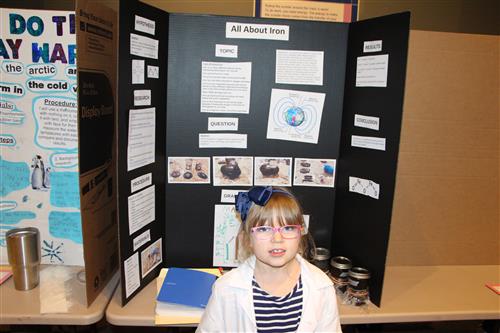 The winners in the kindergarten through second grade category were:

Each year, the members of the Alpha Pi Lambda Chapter of the Alpha Phi Alpha Fraternity Inc. – who support the school system’s district science fairs by serving as judges and providing meals for students and others – choose a student in each category to recognize with a special award.

This year, those awards went to Blair Wallace and Veda Sanka.

The winners in the third grade through fifth grade category will go on to participate in the Region 5 Elementary Science Fair, which will be held Feb. 1 at the University of North Carolina at Greensboro.