To read about winning projects by students at Parkland High School, go to Parkland Projects.

For more pictures featuring students from a number of schools, go to Your Permanent Record. 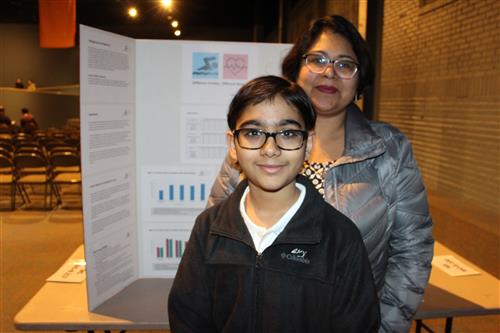 JANUARY 14, 2020 – Sixth-grader Aryaman Shukla likes to swim, and, for his science project at Hanes Magnet Middle, he decided to do research into whether the breast stroke or freestyle stroke produced the healthiest heart rate for people in different age groups.

Aryaman has friends in the swim program he participates in at the White Family YMCA. Some of them volunteered to participate. Plus, the coach strongly encouraged others to work with Aryman. So that took care of the younger group.

To find participants in the adult group, Aryaman walked up and introduced himself, told people what he was up to, and asked whether they would be willing to participate.

“That was kind of awkward,” Aryaman said.

Most said “yes” right away, though, and, even the one adult who was reluctant at first, came around.

A fringe benefit of asking people he didn’t know at first and then working with them was becaming more comfortable with talking with new people. 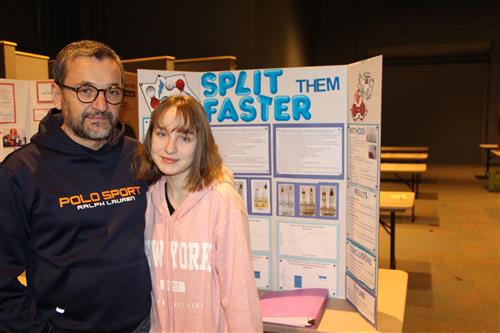 After Aryaman’s project won at the Hanes science fair, the next stop was the Winston-Salem/Forsyth County District Secondary Fair.

On Jan. 10, Aryaman and his mother, Monisha Shukla, headed to Kaleideum North, where they joined more than 100 students in middle and high schools throughout the district for the annual fair.

Ana Murea is in the seventh grade at Hanes. She was one of a number of students whose projects focused on ways to reduce global warming. Her project “Split Them Faster” explored developing hydrogen as an alternative to fossil fuels.

For her project, she looked at the effect that different temperatures had on electrolysis, which can be used to produce hydrogen.

“Higher temperatures result in more efficient electrolysis,” she said. “It was really interesting. I really liked the topic.”

Ana already knows that she wants to pursue a career related to science.

“I am passionate about science,” she said. 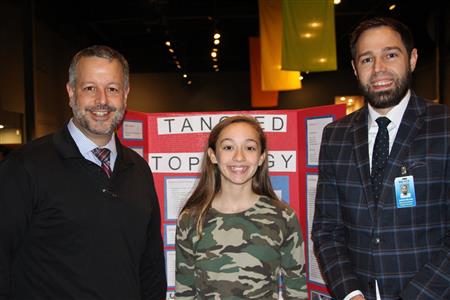 Lydia Berger is also in the seventh grade at Hanes. Her father, Dr. Scott Berger, is a general surgeon. So she has grown up hearing about that world.

“It has been part of my life ever since I was a baby,” she said.

One of the topics that comes up among surgeons is whether, say, a slip knot or square knot is best when performing certain kinds of surgery.

Lydia decided that to do some experiments to find out what knots proved most effective. Based on what many surgeons think, her hypothesis was that the slip knot would be most effective.

“It turned out that square knots worked best,” she said. “It was pretty shocking to all of us.”

Lydia thinks that a different type of material was used for sutures at one time and a different material being used these days accounts for the square knot proving more effective.

Some days, Lydia envisions becoming a doctor. Other days, she sees herself becoming an aerospace engineer. 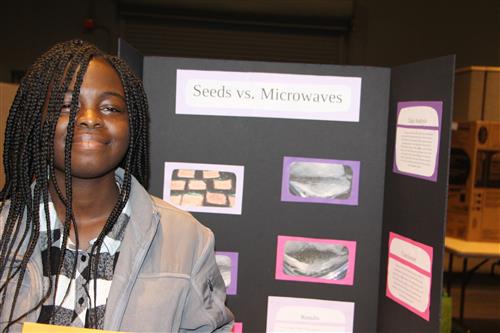 As it happened, David DeLade, who is the Director of K-12 Science, was at Hanes the day Lydia made her presentation to her class. He had been thoroughly impressed, and, when he saw Lydia setting up, he brought over Steve Overholt, who is a Science Coach for the district, to show him.

Tobi Onasanya is in the ninth grade at Paisley IB Magnet.

“I wanted to see the effects of microwave radiation on organic life forms,” Tobi said.

For her “Seeds vs. Microwaves,” project, she used her home microwave to expose 10 groups of radish seeds to microwaves for durations of 5 to 60 seconds. She then studied what effect the various exposures had on the seeds’ ability to germinate.

“It was a pretty fun experiment,” Toby said.

She envisions entering the medical field on day, possibly becoming a neurosurgeon.

Nearby, a friend at Paisley – Ian Franco – had set up his “Gone with the Wind” display. For his project, Ian had built wind turbines that had different numbers of blades in different shapes. 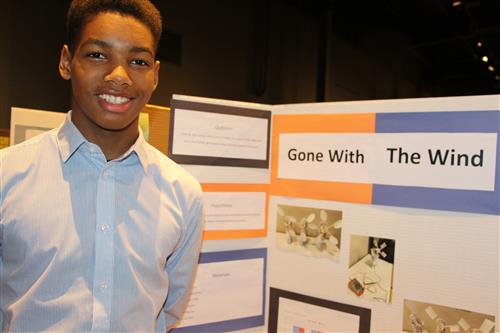 “I like environmental stuff,” Ian said, “and global warming interests me.”

He determined that three blades with rectangular shapes made for the most efficient wind turbine.

Although Ian may become an engineer one day, for the moment, becoming a pilot is at the top of his list of possible careers.

August Blain and Edmund Ball are in the sixth grade at Paisley. Both are big fans of chocolate. So experiments to determine whether Twix, Reese’s or Hershey’s chocolates melted the fastest struck them as an excellent idea.

August’s mother, Christy Blain, noted that they “had their fair share of chocolate” as the experiments progressed.

The thoughtful scientists also brought in a bowl of chocolate for those who stopped by their display to sample.

Aiden Hughly is in the ninth grade was Winston-Salem Preparatory Academy. A big fan of electricity, he decided to explore the power of different lights with his project “Do Numbers Really Count?” 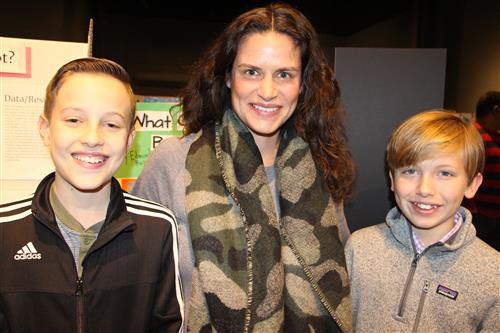 One of the things he likes about science is its precision.

Now in the eighth grade at Clemmons Middle, Haley Eisenbraun and MacKenzie Clegg have been friends for three years.

“She has always been there for me,” Haley said, “and she is one of the best friends I have ever had.”

“We can tell each other anything,” MacKenzie said, “and I can always count on her to be there for me.”

One day while they were at Haley’s house brainstorming about possible projects, the Sharpie pen they were using bled through the paper and made a stain on the coffee table in the living room.

Uh-oh. Would the stain some off?

Thank goodness it did. 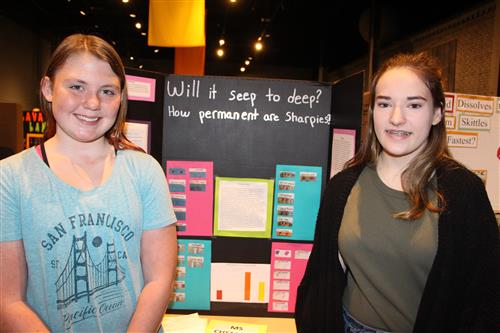 That gave them the idea for their project “Will It Seep Too Deep?” in which they stained various surfaces with Shapries and explored various stain-removal techniques.

“We made sure we used stuff we could throw away afterward,” MacKenzie said.

MacKenzie wants to become a professional actress. She has been acting since her days at Morgan Elementary and savors the sense of family that develops among actors working together.

Haley wants to become a veterinarian. They have two cats at home. When they brought one of the cats home for the first time, they were trying to figure out what to name it when the cat zipped over and licked an electrical socket.

They had their name – Spazzy.

Katie Tolle is in the eighth grade at Hanes. She was already been making dolls with moveable joints so, for “Rock This Joint,” she decided to look at various types of joints.

She made different joints and began experimenting with them. For her display, she added a skeleton that she had from Halloween, and she had the octopus made with a 3D printer. 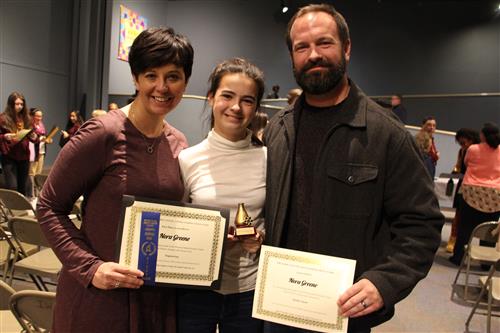 Nora Greene is in the sixth grade at Hanes. She and her father Dustin Greene make a point to keep up with news about the environment. From that came the idea for creating a machine that would capture any plastic bottles - and other debris - floating down a river.

“We have to help our planet,” she said. “Plastic is a really big problem.”

For her project, she built a miniature version of the “The Greene River Sweeper” machine, which she stashed under the display table.

When the judges came around and talked with students, they were impressed enough to award Nora first place in the Engineering category.

Each year, the members of the Alpha Pi Lambda Chapter of the Alpha Phi Alpha Fraternity Inc. – who support the school system’s district science fairs by serving as judges and providing meals for students and others – choose a middle school and a high school student to recognize with a special award.

Nora also received the middle school award from the fraternity.

“I am really excited and overwhelmed and surprised,” Nora said.

She knew just where she was going to hang her certificates – on the wall above her bed.

General awards were given in a number categories. The winners in each category will join the winners in the third grade through fifth grade category at the District Elementary Science Fair at the Region 5 Science Fair, which will be held Feb. 1 at the University of North Carolina at Greensboro.