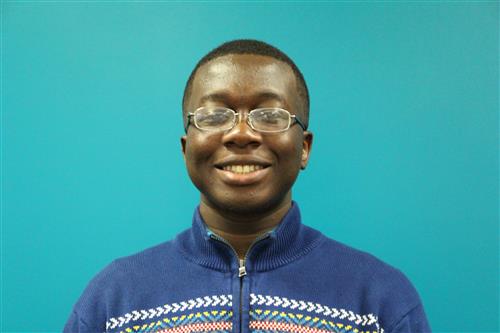 JANUARY 17, 2020 – Because he was born with sickle cell anemia, Allen Choyce has had to deal with pain and other serious health issues throughout his life.

“Allen has challenges every day,” said his mother, Caren Choyce.

He has not let those issues derail him, though. On the contrary, he has become an incredibly productive young man who is a strong student, an active volunteer and an artist.

“Allen has learned to persevere,” his mother said. “He has learned skills and strategies on how to balance his life.”

Plus, he is someone who cares about others, she said. “He is a loving kid all around.”

Now a senior at Reagan High, Choyce – despite missing 50 school days some years and sometimes being hospitalized – has a 3.6 grade-point average. He also takes college classes at Forsyth Technical Community College.

Choyce said he knows that many worthy young people applied for the scholarships, and he appreciates being chosen to receive one of them.

“I feel very honored,” he said.

Because Choyce wants to help children who may be facing health challenges similar to ones he has dealt with, he plans to go to medical school and become a pediatric hematologist, a specialist who focuses on blood diseases.

“From a young age, I knew I wanted to get into the medical field,” he said. “I feel like kids with sickle cell and other blood diseases could really relate.”

Reaching that goal will mean investing four years as an undergraduate, four years in medical school, two years of residency and an additional year of specialization.

Because pain and other health issues are a constant presence, during the course of a school year, Choyce might find that he cannot make it to school from 30 to 50 days. That means he works on his school work when he is out of school and stays up late some nights to keep up.

His teachers at Reagan speak highly of Choyce. 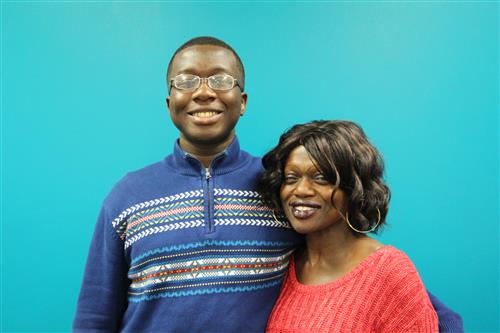 April Allen Sapp, who teaches social studies, said: “I found him to be very responsible, sarcastic and witty. I am very sarcastic and we enjoyed bantering back and forth. Allen is also very direct and I have always enjoyed the delivery of his speech- he knows how to deliver his point with expectancy. Allen in my class has just been like every other kid – except he has challenges with his health that prevent him from getting perfect attendance.”

“Allen I feel strives to not stand out in any way and, in my class, he did that well.”

Michaela Colon, who teaches English, said: “Allen does not allow his sickle cell anemia to be a crutch or an excuse. In fact, he worked twice as hard as his peers since he chose to keep up with his assignments even when he was hospitalized and in excruciating pain.”

“He shows a maturity and sophistication of thought that is beyond his years. For Allen, simply having the correct answer was not enough. He wanted to understand how and why and answer was correct.”

David A. Beveridge, who teaches English, said: “One thing: he never lets his medical condition interfere with his school work. He thinks of others always before himself. He wants to be a pediatric hematologist so he can help sick children. He loves to read and write and has a great imagination.”

Despite the challenges of keeping up with school, Choyce finds time to volunteer, read, and work on creative projects.

Some years, he has had to be admitted to the hospital four times. Over the years, he has gotten to know Brenner Children’s Hospital and the rest of the Wake Forest Baptist Medical Center complex, and, since he was a freshman, he has volunteered at the medical during the summer, taking on such responsibilities as helping people get where they need to go.

Choyce – who went to Meadowlark Elementary and Jefferson Middle before heading to Reagan – also serves as a mentor for a sixth-grader, participates in the Crosby Scholars program, and is active in the children’s ministry at the family’s church – St. Paul United Methodist on Dellabrook Road.

These days, he is at work writing a fantasy novel that features a boy named Lloyd who can alter objects with his mind. And he has been an active artist for years.

While he was in the hospital when he was younger, he met people associated with Arts for Life, a state nonprofit group that organizes educational arts programs for young patients with serious illnesses. Although Choyce did learn to play one “Spongebob” song on a recorder, it was writing and art that really connected with him.

Each year, he participates in the show at the Southeastern Center for Contemporary Arts that features students who have worked with Arts for Life, and, when he was 14, the people at Dewey’s Bakery used one of his pieces of art that featured elements of Super Mario as the inspiration for the decorations for the cake they served at the reception.

Every now and then, Choyce thinks about a life in which he didn’t have sickle cell anemia.

“Sometimes I wonder what it would be like if I didn’t have it,” he said.

He soon shrugs off those thoughts.

“It is what it is and that’s all it will ever be.”

Both Choyce and his mother are grateful for everyone who has supported them over the years – the people at school, the people at church, the doctors, the nurses, the psychologist Choyce talks with.

“We are so very thankful and want to thank God first for everything God has done for Allen,” Caren Choyce said, “because, without God, without prayer, none of this would be possible.”

Choyce was a week old when his parents Caren and Charles Choyce learned that he had sickle cell anemia. When doctors told them what to expect, his mother said, one thing they told them was to expect challenges at school - “His average is probably going to be no more than a C because he is not going to be there all the time.”

She and her husband were determined to make sure that was not the case.

“We want to raise him to believe he can be anything he wants,” they said to each other. “It doesn’t define you. What will define you is your action, your thoughts and your spiritual beliefs.”

Choyce is the middle child in his family. He has two brothers. Adrian, who is 14, also attends Reagan, and Alexander, who is 21, attends King University in Tennessee.

Choyce has been accepted at a number of universities – and has been offered a number of scholarships. He plans on going to the University of North Carolina at Greensboro.

The members of the Emancipation Association Scholarship Committee chose the winners based on academic excellence, strong character, record of service, the strength of the essay that applicants wrote, and on a personal interview, said Daniel Piggott, the chair of the Scholarship Committee.

“It is our hope that the recipients realize the community has a vested interest in them continuing post-secondary pursuits and becoming contributing citizens to society,” Piggott said. “Furthermore, we hope and trust that they realize a post-secondary education is an absolute necessity and each come to realize that service to others is the rent they pay for the space they occupy on earth.”

The association was formed in 1880 to celebrate the signing of the Emancipation Proclamation.

“The Emancipation Association has an unbelievable history,” Piggott said.

Piggott sent along information excerpted from the Jan. 2, 1915 issue of the Winston-Salem Journal:

“The 1915 Celebration was held January 1st at the Forsyth Courthouse.  Rev. F. Wentz, pastor of the ‘colored Presbyterian Church’ was the speaker. His topic was ‘The possibilities of the Negro Race and Its Destiny.’ The ceremony also included songs and recitations telling of struggles and achievements.  After the program, S.G. Atkins was elected president for the coming year.”

The awards ceremony was held Jan. 1 at New Bethel Baptist Church. The winners of the Emancipation Association Scholarships are: