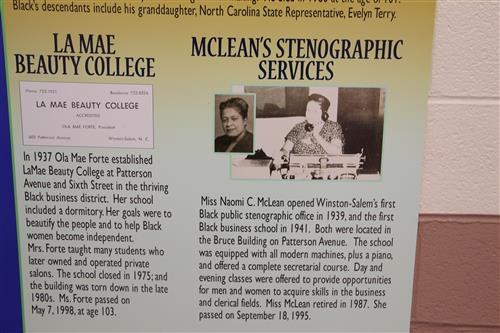 FEBRUARY 10, 2020 – During Black History Month, people can learn more about the rich heritage of blacks in Winston-Salem at an exhibit at the Anderson Community Center on Reynolds Park Road.

Those who come to see the Black Culture Pop Up Exhibit will find photographs and accounts that provide information about Winston-Salem’s history in Health Care, Activism, Business, Education, Spirituality.

The exhibit – along with a series of programs being held at the center on Saturdays in February – is sponsored by Heritage 365, which worked with people and organizations throughout the community. Malishai Woodbury, who is the chair of the Winston-Salem/Forsyth County Board of Education, was one of the people who helped organize the project. 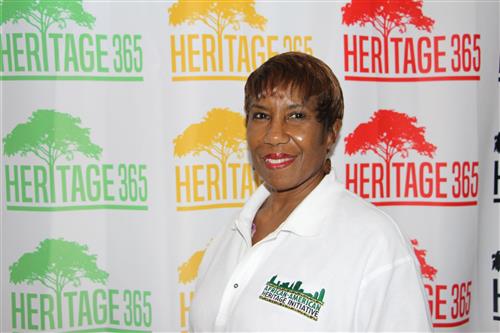 Organizations such as The Winston-Salem Foundation, the Z. Smith Reynolds Foundation and the Millennium Fund – along with such individuals as real-estate agent John Switzer and several members of the Board of Education – provided financial support.

Cheryl Harry, the Executive Director of Triad Cultural Arts, put together the exhibit. On Friday Feb. 7, she was installing the exhibit, which will be open during the center’s regular hours.

For Harry, the phrase “lest we forget” says a lot about why she thinks it’s important to have such exhibits.

For blacks and others, it’s important to know the history of this community, Harry said. “The themes we selected are the ones I thought were so important.”

Harry, who grew up in Winston-Salem and graduated from Reynolds High school in 1972, said she hopes that people of all ages will find coming to the exhibit a valuable experience.

“It’s targeted toward everyone,” Harry said. 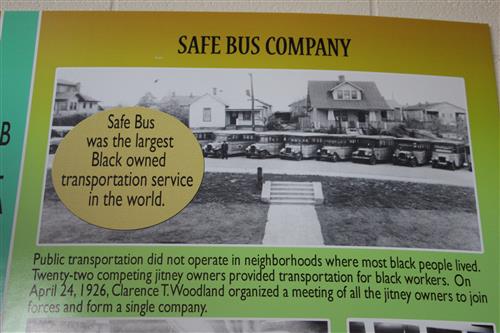 The displays in the Health Care part of the exhibit are on loan from Winston-Salem State University, which, earlier, created an exhibit for the university on blacks’ contributions to health care in the community.

Harry created the other displays based on her own research. Many of the photographs came from the Forsyth County Public Library.

Bound copies of the Winston-Salem Chronicle from 1996 are on view.

At computers set up along one wall, students can visit with “Corey: The Culture Guide, who “teaches scholars about self-identity, history and the important role blacks played in shaping our society.”

Harry also included some fun elements for younger children. With black radio station WAAA in mind, they can pick up a microphone and have their own radio show.

With George Black in mind, there are miniature bricks that they can use to build miniature walls. At the Saturday program that focuses on George Black on Feb. 22, bricks made by his company are scheduled to be on display. 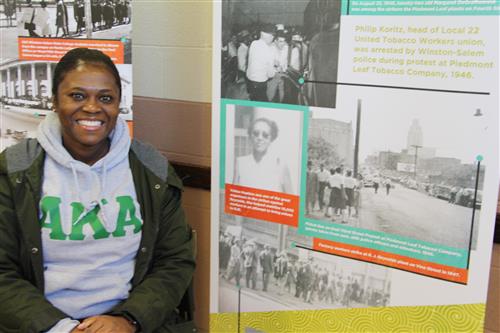 People who want to read all of the history on display in the exhibit could spend a significant amount of time there.

Kellie Easton, who is the President of Action4Equity, said the exhibit provides an opportunity for people to reflect on local history.

‘I hope people walk away understanding we have tons of resources in our community,” Easton said.

With the need to once again encourage and support members of the black community in establishing their own businesses, she particularly appreciated the information about the Safe Bus Co. and other examples of black entrepreneurship.

“I find this to be very timely,” Easton said. 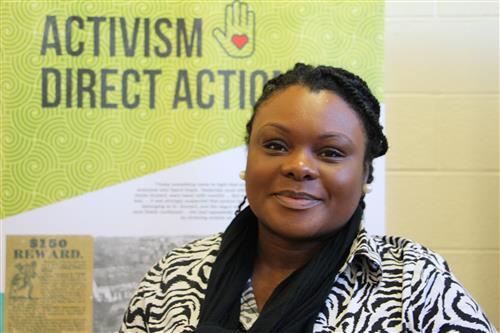 The Anderson Community Center is a rich source of black – or African-American - history throughout the year. The Director Bryant McCorkle, who is also the Parent Involvement Coordinator at Sedge Garden Elementary, believes it’s important for young people to understand local history as it relates to African-Americans.

He was born at Kate B. Reynolds Memorial Hospital.

“I grew up in Kimberly Park public housing,” McCorkle said.

By the time he started school, students were being bused with the intention of increasing integration. He started school at Sedge Garden – the school where he now works – and went on to Whitaker Elementary, Kimberley Intermediate, Jefferson Junior High, Paisley High and Mount Tabor Senior High.

Because of what the activism and everything else that happened in the community as it relates to blacks – or, African-Americans, the term McCorkle prefers – affected him deeply, he now makes it his business to educate young people growing up today. 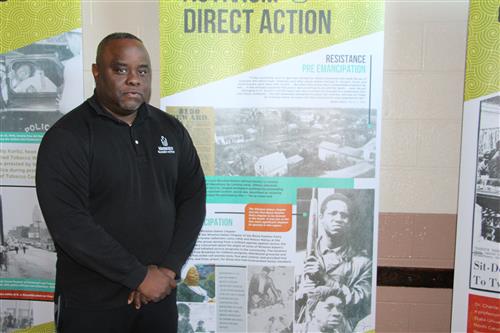 Since he became director at Anderson Community Center, the center has been offering classes in African-American history throughout the school year, along with tutoring and other activities that promote academic success.

The exhibit includes a bound volume of the Winston-Salem Chronicle issues from 1996, and a story in one of the editions is about McCorkle working with young people.