"We Didn't Get Here By Ourselves"

“She was good at what she believed in and she didn’t let anyone stop her,” said Keniah, who is in the eighth-grade at Mineral Springs Middle.

“He spoke up for what was right and didn’t use violence,” Patience said.

Hope Adams, who is in the sixth grade at Clemmons Middle, especially admires C.J. Walker, who founded her own beauty products company.

“She was one of the first woman to open her own business,” said Hope, who envisions opening her own fashion-design business one day.

On Saturday Feb. 8, the three girls – and Ana Atienza, who is in the seventh grade at Philo-Hill Magnet Academy – came to Anderson Community Center to hear Sen. Paul Lowe talk about “Church & Spiritualty,” the first of four Saturday programs being held at the center as part of a celebration of Black History Month. 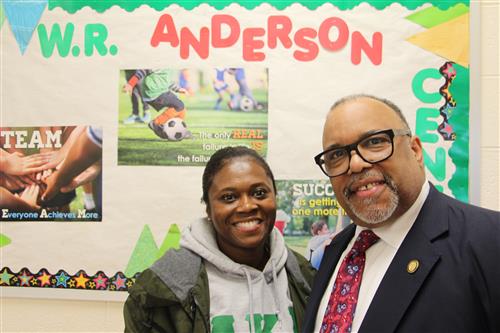 The four girls belong to the Little Lamb League of Born Again Free Church. They were there with the league’s advisor, Jennifer Adams. When Adams heard about the programs, she said to the girls “This is a good way for us to learn about our local heritage.”

The program was held in same room as the Black Culture Pop Up Exhibit which has photographs and accounts that provide information about Winston-Salem’s history in Health Care, Activism, Business, Education, Spirituality.

“There are families in and out,” Woodbury said. “We were very intentional that the history gets to the families and the children.”

On this particular Saturday, the center was filled with students and families there for a basketball tournament in the gym. The tournament meant that, throughout the course of the day, hundreds of people had the opportunity to stop by the exhibit.

In addition to being a state senator, Lowe is the minister at Shiloh Baptist Church, one of the historically black churches represented in the exhibit. 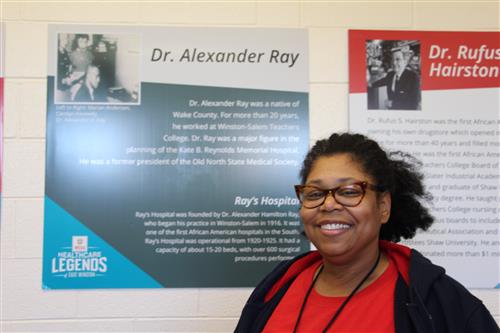 Asked what he wanted people to get take away from the morning, he said, “The hope is young people will get a better understanding of their community.”

“It paves the way for them to look at varied opportunities.”

There to introduce Lowe was Felecia Piggott-Long, who teaches English and Theatre Arts at Carver High School. Piggott-Long grew up in East Winston and is a 1979 graduate of East Forsyth High School.

For her, it’s important for young people to understand how they got here.

“We didn’t get here by ourselves,” she said. “Someone made a way for us…and it’s up to us to make ways for others.”

Piggott-Long regularly works the history of this community into her lessons. She wrote a play about Carl Matthews, a student who participated in early sit-in in Winston-Salem. It’s called Taking a Seat at Freedom’s Table. 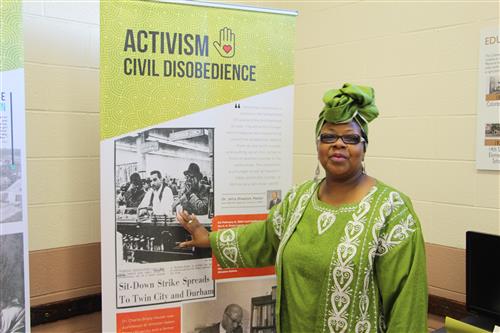 When it was time for the formal program to begin, Serena Mumford – who, in addition to working at the center also serves as the technology facilitator at Sedge Garden Elementary – welcomed everyone.

It was fitting that the programs were being held at Anderson Community Center, she said, because Director Bryant McCorkle has a history of making sure young people know about local history and have the skills they need to succeed academically.

“His mission is to meet the needs of the whole child,” Mumford said.

McCorkle wasn’t able to welcome everyone himself because he was busy serving as a referee for the basketball tournament.

Piggott-Long opened her introduction by reading a poem by Langston Hughes – “The Negro Mother.”

After filling everyone in on Lowe’s history, he stepped up.

As he sees it, Lowe said, becoming a politician was an extension of his ministry.

“The main goal is to try to help people,” he said.

As an example, he mentioned his efforts to help the local community.

“I am having conversations with companies to see how we can bring companies to this city so people will have jobs,” he said.

As it pertains to black history, Lowe said, churches were historically a place with people got to know each other and make connections.

“That’s where we got our opportunities,” he said.

He urged those present to find a faith community if they didn’t already have one.

“Being involved in a faith community is one of the most important things you can do as it relates to your development,” he said.

When it came time for him to take questions, Woodbury said, “What has been the black church’s role in political action in Winston-Salem?” 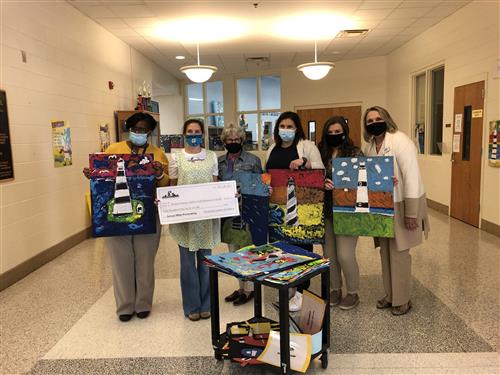 For one, Lowe said, black churches were instrumental in getting blacks employed at R.J. Reynolds Tobacco Co.

“What does a senator do?” asked one of the students.

One of the things a state senator does is help find the resources for schools and roads. As an example, he mentioned the recent work done on Business 40 – now Salem Parkway.

“What inspired you to be a pastor?” asked another student.

He always wanted to be in the community helping, Lowe said.

He also spoke about the importance of learning to read and to write well and to work with others.

“Prepare yourself so you can be prepared for whatever opportunity God brings into your life,” he said.

The programs and exhibit are sponsored by Heritage 365, which worked with people and organizations throughout the community. 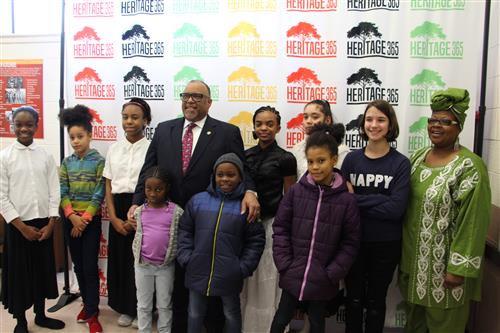 Organizations such as The Winston-Salem Foundation, the Z. Smith Reynolds Foundation and the Millennium Fund – along with such individuals as real-estate agent John Switzer and several members of the Board of Education – provided financial support.