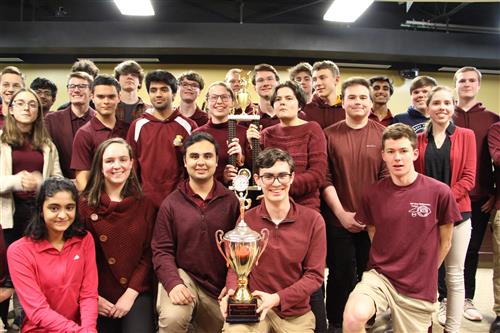 It was the sixth year in a row that Atkins won the District Championship.

“This was for Mr. Childers,” said Atkins senior Jackie Nikas.

Joe Childers was the principal at Atkins when he died unexpectedly in December.

Nicholas Arzillo, who is the head coach for the Atkins team, said that everyone really misses Childers.

He was a strong supporter of the Academic Competition team, Arzillo said.

“He loved Academic Competition. It was a way to see Atkins excel.”

It was great to be able to win and to dedicate the District Championship to his memory, Arzillo said. 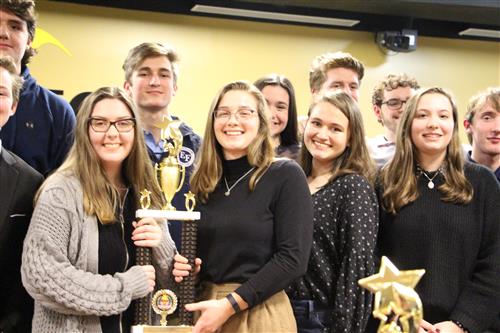 Laurie Smith is the head coach of the East Forsyth team.

“It has been such a pleasure to work with these kids,” Smith said.

“Most of our team are students who started as freshmen, and it’s been a joy to see them doing so well.  We are lucky to have terrific parents who cheer us on all season! Although, we are often the underdogs, we probably have more fun than some of the other schools! We're definitely proud of this season!”

The championship match was the culmination of a season that began in November. During the weeks that followed, teams representing Winston-Salem/Forsyth County high schools throughout the district competed in the regular season.

Each match included rounds in five categories: English, Math, Science, Social Studies, and General Knowledge. The team that correctly answered each toss-up question received 5 points and was the first to answer directed questions in that category that were worth a total of 12 points. Then the other team had the chance to answer directed questions.

The playoffs followed the regular season. 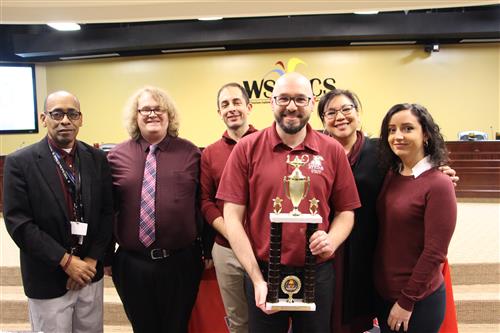 Cheryl Wright, the 21st Century/Academic Competition Coordinator for the school system, said that, throughout the season, she was amazed by the students. They excelled in all content areas, she said.

At the championship match held at the school system’s Education Building on Wednesday Feb. 12, many parents and other family members were present.

Among those cheering on the East Forsyth team was Principal Rodney Bass.

It’s been a good year, Bass said. The coaches and students have done a great job.

“You couldn’t ask for a better group of students to represent East,” Bass said.

Among those cheering on the Atkins team were Jan Atkinson, who has been serving as interim principal, and Chris Nichols, who officially becomes principal on March 1.

When it was time for the championship match to begin, Instructional Superintendent Lionel Kato, who was served as the moderator, welcomed everyone. 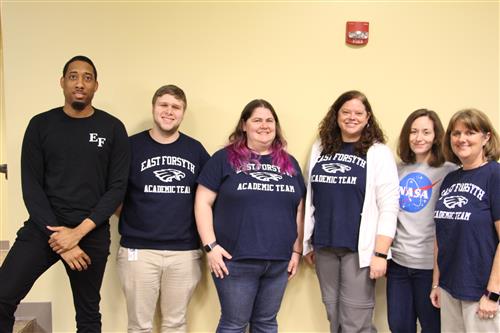 Shortly after 6 p.m., the East Forsyth English team correctly identified author Stephenie Meyer as the answer to the first toss-up question, and they were off.

If members of the audience didn’t already know such facts as May being the most dangerous month for tornadoes in the United States and the faces on Mount Rushmore being carved out of granite, they certainly did by the end of the match.

The Math questions were so complex that, for many of those in the audience, it was impossible to understand the question, much less solve it. But, in a matter of seconds, a student might provide the correct answer.

There was humor along the way.

When a member of the East Forsyth team correctly identified Jenny’s telephone number from the 1981 Tommy Tutone song, Kato smiled and said, “I didn’t think they would get that.” 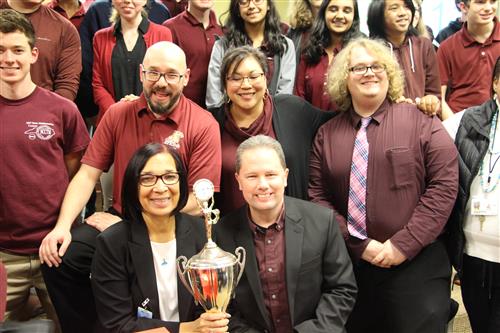 And, when a team couldn’t come up with a good guess for the answer to a question, they might offer an answer guaranteed to draw a laugh. For instance, when the Atkins team was unable to name a movie about the historic B-17 bombers from World War II, they offered Toy Story.

That said, the students answered one question after another correctly, knowing answers that many members of the audience had long forgotten or never knew.

The championship match lasted about 2 hours.

As everyone gathered in the auditorium before the match, students from both schools talked about why they participate and what they get out of the experience.

She’s glad she did. 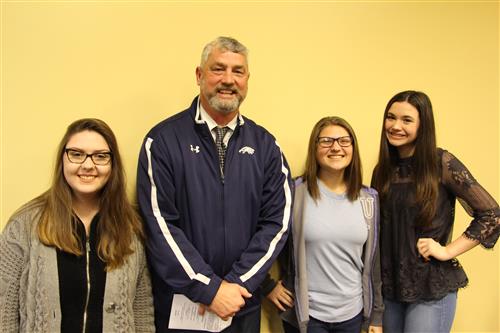 “We have a good time,” McCracken said.

She particularly enjoys it when she comes up with an answer that surprises fellow team members who sometimes refer to her at the “Wild Card.”

McCracken’s parents, Tina and Gary McCracken, were there to watch their daughter compete. Tina McCracken said it’s been a good experience for her daughter.

“She enjoys learning. She enjoys participating with her peers.”

East senior Shane Weidman has participated in Academic Competition all four years. This year, he served as captain of both the Social Studies and General Knowledge teams.

Weidman likes competing, and he enjoys doing that with all of his friends. Having started competing together when they were in middle school at Kernersville Middle, he and some other members of the East Forsyth team have been teammates for seven years.

Weidman was wearing a bowtie. For him, it was a humorous touch. 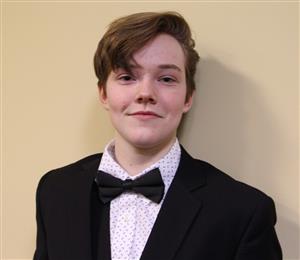 “The overkill of dress,” he said and smiled.

When Weidman heads off to college next year, he plans to major in sociology as an undergraduate before going on the medical school. He thinks taking courses that help him understand people will make him a better doctor.

Alex Lounsbury is a freshman at Atkins. So this is his first year on the team. It has been a great experience, he said.

“I like that it’s a big family,” Lounsbury said. “We support each other in our ups and downs. It’s a good team no matter what happens.”

Working with horses and riding is also an important part of his life. At Cash Lovell Stables & Riding Acadmy he teaches young people to ride and takes care of horses. 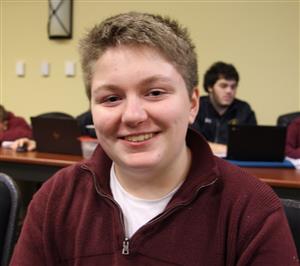 In his life, he is always working hard at one thing or another, he said, “It’s the Atkins way.”

Senior Jayanee Venkat has been on the Atkins team all four years and is a starter on the Math team this year.

She really likes putting her knowledge to use, and it’s exciting when a competition goes well, she said.

“You get this adrenalin rush and a feeling of satisfaction.”

Math is fun, in part, because the answer is not something you know beforehand. You figure it out on the spot.

She plans to become an engineer who specializes in artificial intelligence.

“I think it can be used to help the world in general to be more efficient,” Venkat said.

Atkins senior Christian Keith became a starter this year and has had a lot of fun this season. 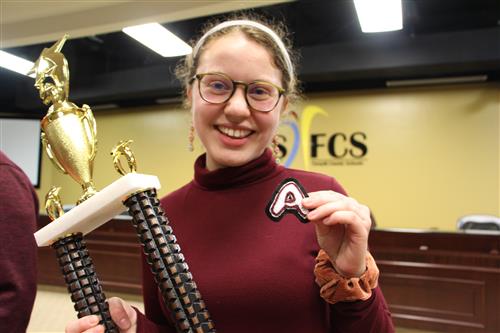 “I absolutely loved it,” he said.

His favorite part is spending time with the other members of the team.

“I really enjoy them,” he said.

Rob Alexander was one of the parents on hand. His son, Jonathan Alexander is a junior on the Atkins team.

Asked what makes his son special, Rob Alexander said, “He is very creative and innovative, and he has a great balance between art and the sciences.”

In addition to being a visual artist who particularly enjoys painting and sketching, he plays the piano.

Coach Arzillo’s wife, Jeanne Arzillo, is an art teacher at Northwest Middle School. In her personal art these days, she is focusing on making yarn and knitting and crocheting. She had been knitting several “A” letters for her husband to give to students and was working on finishing the last ones.

After the victory, her husband presented them to some members of the team.

The coaches for the Atkins team were:

The coaches for the East Forsyth team were: 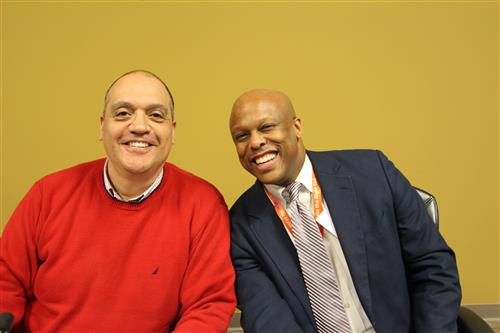