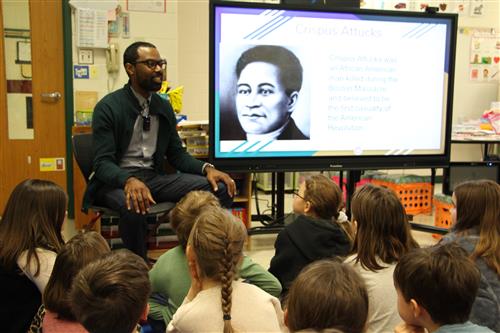 FEBRUARY 27, 2020 – Way back in 1770, an ancestor of fourth-grader Julian Attucks was the first American killed in the Boston Massacre.

The students in his mother’s class are reading buddies with the kindergarten students in Barbara Kibler’s class. On the morning of Wednesday, Feb. 26, the students from both classes gathered in Kibler’s classroom so that Julian’s father, Otis Attucks, could tell the story of Crispus Attucks.

Crispus Attucks was the son of a black slave and of a woman belonging to the Wampanoag tribe of American Indians. There is some question about whether Crispus Attucks was a free man or an escaped slave at the time. What is certain is that he worked as a stevedore – traveling in ships, he would unload or load cargo when the ship came into port.

In 1770, tensions were high between the Americans and British, in part because Americans were upset about what they considered to be unfair taxes. On March 5, Crispus Attucks was among a group of Americans who got into an altercation with British soldiers in Boston. He was the first of several Americans who died after being shot.

The incident came to be known as the Boston Massacre.

“He was an inspiration for the fight for freedom and justice we have today,” he said.

In the years since, members of his family have served the country as soldiers in such wars as the Korean War, he said. “That’s a proud history of service.”

As it happens, people at Whitaker Elementary first learned about Crispus Attucks not through Deania Attucks but through Kibler. Doing research for an earlier Black History Month, Kibler came across online posters featuring Crispus Attucks.

“I was fascinated,” Kibler said. 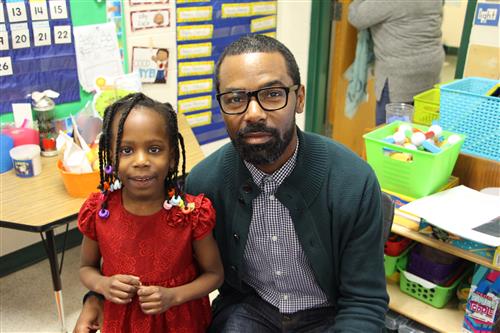 She and Deania Attucks were already friends. When Kibler pointed out that Deneia Attucks and Crispus Attucks share the same last name, Deneia Attucks told her that they share more than that. Her husband Otis Attucks is a direct descendant.

“I was fascinated,” Kibler said.

Julian doesn’t have his mother as his teacher. So, on Wednesday, he left his class to join his parents in Kibler’s class.

When Deneia Attucks introduced her husband, she joked that, while everyone knows that she is outgoing not to expect that with her husband because he has a touch of shyness.

Along the way, Otis Attucks talked about such topics as the United States minting, in 1998, a commemorative silver dollar honoring Crispus Attucks. He also noted that, if Crispus Attucks was an escaped slave, having American Indian blood probably would have made it easier for him to move about freely.

On the lighter side, Otis Attucks said that, when he was in high school, he would sometimes tell people that his middle initial “C” stood for “Crispus” when, in fact, he has a different middle name.

Otis Attucks also made the point to students that it’s important to be open to learning every day.

Making his living as a research scientist, he told them, “I have to learn something new almost every day.”

After he answered all of the students’ questions, many of the fourth-graders visited with their kindergarten reading buddies. 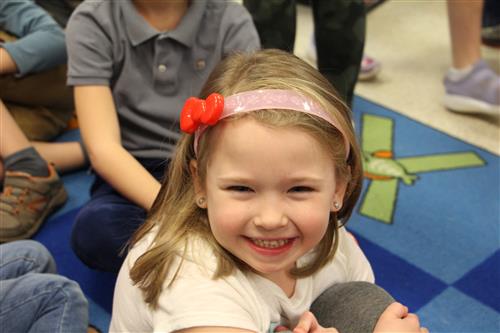 Fourth-grader Gabe Rauton and kindergartener Reeves Blaylock are buddies. Gabe said that, although he already knew some about Crispus Attucks, he was glad to be able to learn more.

“It was cool to know more about him,” Gabe said.

Gabe said that, when he went home, he would tell his family about some of the things he had learned.

Afterward, Deneia Attucks said that, in general, she thinks it serves students for people to come and tell their story.

And, in the case of her husband’s story, it helps students learn more about the history we all share.

“I just hope they understand black history is American history,” she said.

And understanding what came before helps students understand “what makes America what it is today.”

While the kindergarten students, Kibler and Kim Spencer - who Kibler refers to as "teacher assistant extraordinaire" - were waiting for the fourth-grade students and the Attucks family, students had a few minutes to respond to an invitation to talk about their favorite letter and share jokes.

For several students, their favorite letter is the first letter of their name. Graham Jones likes “G,” and Annie Kate Holley likes “A.”

Others like letters for different reasons. Sadie Moore’s favorite letter is “G” because that the first letter in “giraffe.”

“That is my favorite animal letter in the world,” Sadie said. 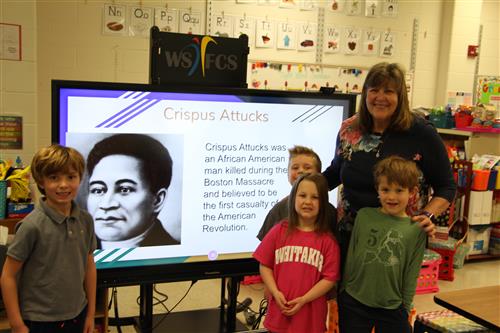 “Why did the dog climb in the oven?”

“Because he wanted to be a hot dog.”

Along the way, it came up that Kibler has been a teacher for 42 years.

When you’re in kindergarten, it’s hard to imagine that many years, and Ali Mikesell “I can’t believe that.”

Teaching is a life that she has loved and continues to love, Kibler said.

“I felt called to be a teacher.”